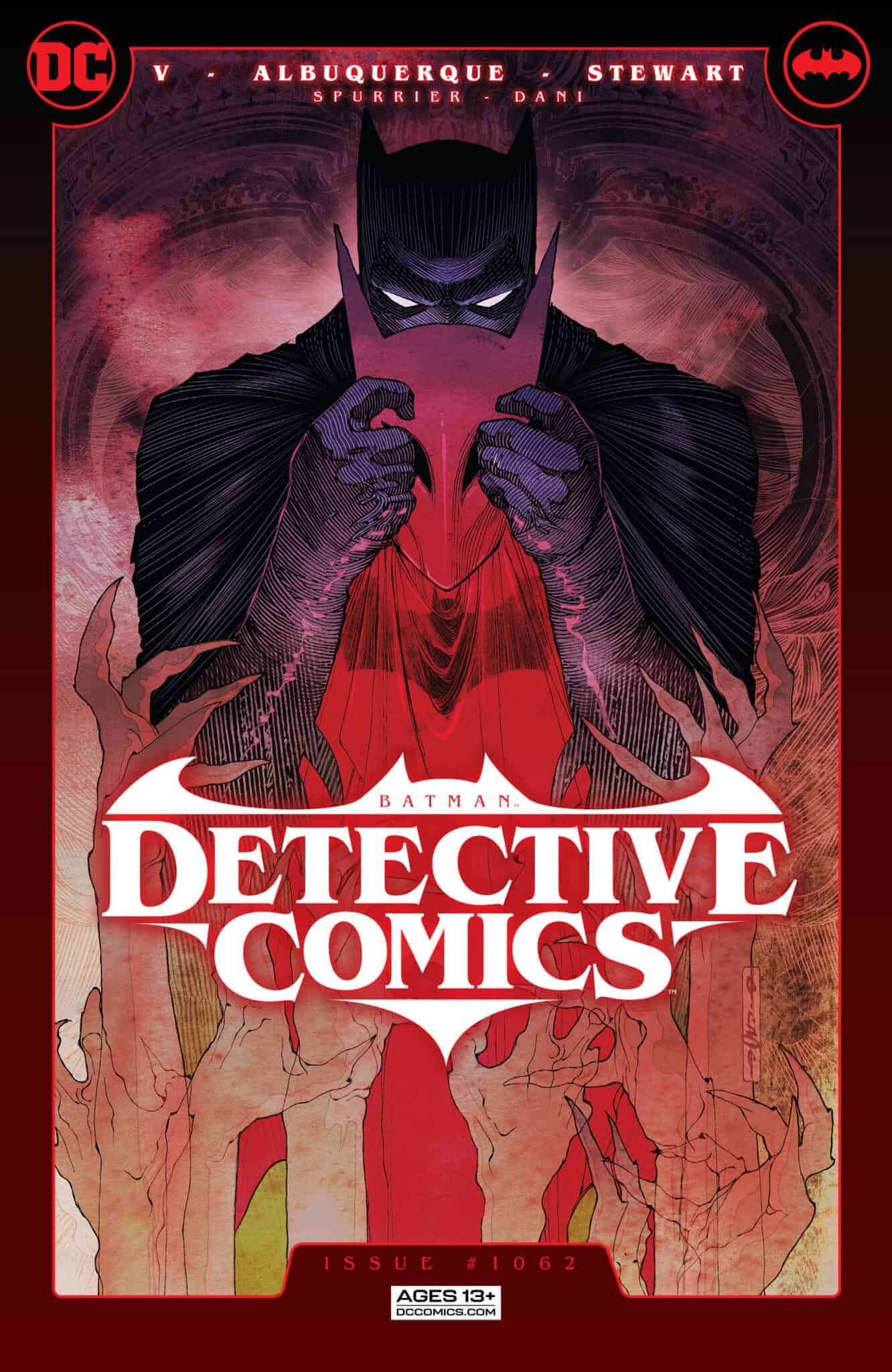 Gotham Nocturne part 1 of 4: “Overture.” It’s a new era for the detective of the night as we introduce award-winning new series writer Ram V (Catwoman, The Many Deaths of Laila Starr), and artist extraordinaire Rafael Albuquerque (American Vampire, Superman/Batman)! Together, they’ll be turning Gotham into a tragic yet beautiful gothic opera for our eyes and ears to feast on.

Something is terribly wrong with Batman. No matter the tests Bruce takes, nor the numbers he counts, the greatest detective in the world can’t pin down the source of this creeping dread—of his own inner demons and a looming mortality. Meanwhile, real demons roam the shadows as an ancient melody haunts the Gotham night. Here now the curtains rise and as the eerie tune streams in…who is human, who is demon, who is to tell? As Batman investigates the songs and the demons of Gotham, he is forced to confront the oldest question…whether there has been a demon within him all along…and if so, what does it want…and why hasn’t it taken over yet?

Dearly beloved, we are gathered together to get through this thing called life. Electric word, life. It means forever, and that’s a mighty long time. Now, you’re probably wondering why the beginning of my review for the Ram V and Rafael Albuquerque’s run on Detective Comics is being narrated by Prince, and I cannot explain why his immortal lyrics are stuck in my head, but they are. Ram has been one of the top writers working in comics today. He’s had stellar runs on Catwoman, Justice League Dark, and The Swamp Thing for DC, and Venom for Marvel, where he’s drawing loads of acclaim from the rest of the comics world. And that’s not even mentioning his creator-owned stuff like Laila Starr, These Savage Shores, and Grafity’s Wall. The man can just do no wrong.

He’s helped give Catwoman and the rest of Gotham a new foil with the introduction of Father Valley, an assassin who seems to be a priest, or someone who was deeply involved in the Catholic Church, and now kills people for money. There’s a lot of different types of villains the Batfamily deal with, but an assassin who suffers from religious obsessions and compulsions is a rather different take for the types of criminals Gotham breeds. So with this issue of ‘Tec, Ram and Rafael are bringing something new to Gotham, and it looks like it’s going to be big. So big that Talia’s involved, and with Talia, it’s always something that’s deeply personal, and possibly catastrophic for Bruce. Not only this, but V’s also giving us some continuity strokes from Grant Morrison’s run, which brings out the fan in me. What’s going on? What type of horror are we going to get with this team? Can this be one of those runs that could be counted among those of the greats?

Rafael Albuquerque joins Ram on art duties here, and his style lends heavily to the tone that Ram’s going for in this story. Albuquerque’s past credentials on books like American Vampire helps to create the gothic (for lack of a better adjective) atmosphere that’s going to elevate this story. And I just realized why the Prince lyrics jumped into my mind after reading this. It’s the energy that these two are bringing to the title. ‘Tec has had lots of different creators on it since the beginning of the Rebirth era, and each new writer and artist brought a different energy to the book. With Tamaki, it was a kinetic anger that was epitomized in her take on Huntress. With V and Albuquerque, it’s more of a horror vibe, which lends itself to the strengths of these creators from their previous works. This first issue shows a lot of potential, and promise from two very talented creators. With this, and the new creators on the main Batman title, this looks like it’s a very good time to be a Batman fan.

Along with Ram V and Raphael Albuquerque, we’re also getting backup tales from Si Spurrier and Dani, that surrounds former Gotham commissioner Jim Gordon, who just finished up his jaunt on the trail of the Joker, is providing the eyes of the story from Gotham’s streets. Dani’s art is gritty, and sketchy, giving an ugly face to those who are most often overlooked, yet a beauty that shines through every panel of art, and line of dialogue written. These backups could be the beginning of something great.

Ram V and Rafael Albuquerque have just unleashed a mystery on Gotham and Batman that looks to unleash a tale of horror and macabre that we’re just not used to seeing in our regular Batman line of comics. A darkness is about to fall on Bruce, and this team is going to give us one hell of a ride, so buckle up.