Detective Comics #1066: Demons We See, and Demons We Don’t See 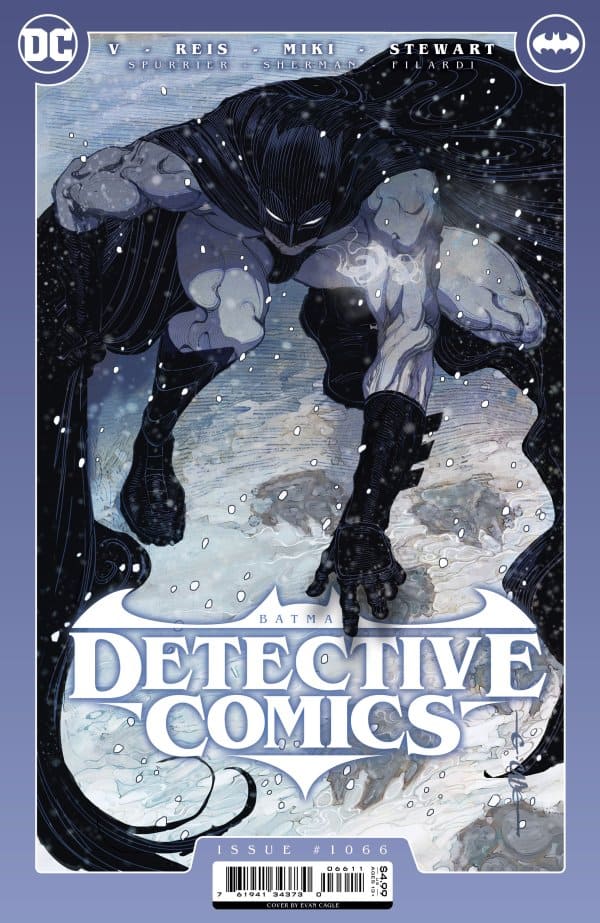 GOTHAM NOCTURNE, ACT I: SOMETHING IN THE WAY, PART 1 / A TALE OF THREE HALVES, PART 2 OF 3

As the Azmer demon takes hold of the Harvey Dent side of Two-Face, it's up to the bad side to save them both before it's too late…that is, if Harvey will give up the identity of Batman to help them. Meanwhile, the young Orgham heir Arzen meets Bruce Wayne for the first time, and Bruce see potential in the boy.

It’s the second arc of Ram V’s run on Detective Comics, where he’s joined by comics superstar artist Ivan Reis, as they continue to weave this dark overture with Bruce, Two-Face, and the return of Commissioner Gordon to Gotham continues with this issue. Meanwhile while this is going on, we get a closer look at Arzen Orgham, Shavod, and the demon Azmer, and to top it all off, a return of one of Bat’s oldest, and most recognizable rogues. It’s a pretty stacked start to the first issue of this new act.

Ram V’s work on Bruce, and his role in Gotham isn’t quite as defined as we’ve become accustomed to see whenever a new creator comes on, but it’s okay. V’s going in another direction, and that’s to take Batman, and his role in Gotham in a more supernatural twist. Batman, and Gotham, while usually portrayed in a more grounded, and rooted in a crime noir setting, with superhero tropes flourishes, but from time to time, a good supernatural thriller will hit those spots that just tickles fans creatively. This looks to be one of those stories.

V’s characterization feels a tad bit wonky here, but I’m just chalking that up to him still being so new to the book, but V is one of those writers who can walk onto any book, in almost any genre, and write the crap out of it. Even when the voice is slightly off, the characters’ notes and personalities shine through with every panel. He even will tie his own book so there’s no mixed continuity errors, like the upcoming mayoral elections that’s taking place in Gotham in other Bat related books. Despite being a very, very big fan of the Tynion & Tamaki post Joker War era on the line, this could eclipse that. Having V here, and Zdarsky in the main Batman book, we’re in an era that could exceed all expectations.

Joining V in this issue is legendary comics artist Ivan Reis, who has quickly become one of the artistic heavyweights over the course of the last two decades. Rising to heights during his run on Green Lantern with Geoff Johns, became the IT artist during the Blackest Night and Brightest Day events near the end of the post-Crisis era DC Comics, where he’d help launch Aquaman for the New 52, before jumping on Justice League with Johns. Unfortunately DC didn’t seem like they knew what they wanted to do with him in the Rebirth era, before becoming the main artist for Bendis’ run on Superman, where he’d stay until Bendis would leave just before the Future State event. Seeing him here, using a style that you’re not quite used to. I always liked to compare his style to Alan Davis, mixed with some Big John Buscema, strong, bombastic superhero stories, and characters, full of emotion, but here it’s dark, and moody. Full of a sense of menace, and the macabre, making him the perfect fit for this story. After nearly twenty years of watching him glow, it’s so refreshing to see what else he has for us.

It’s the second part of Ram V’s opening arc on Detective Comics, and it doesn’t look like he’s planning on slowing down anytime soon. He’s bringing in some fresh faces to Gotham, and looks like he’s got some macabre plans for Batman, and the rest of the dark underbelly of the city. I hope to be as in love with his take here as I was during his run on Catwoman and JLD.

Detective Comics #1066: Demons We See, and Demons We Don’t See