Detective Comics #1068: A Duality of Ego and Humanity 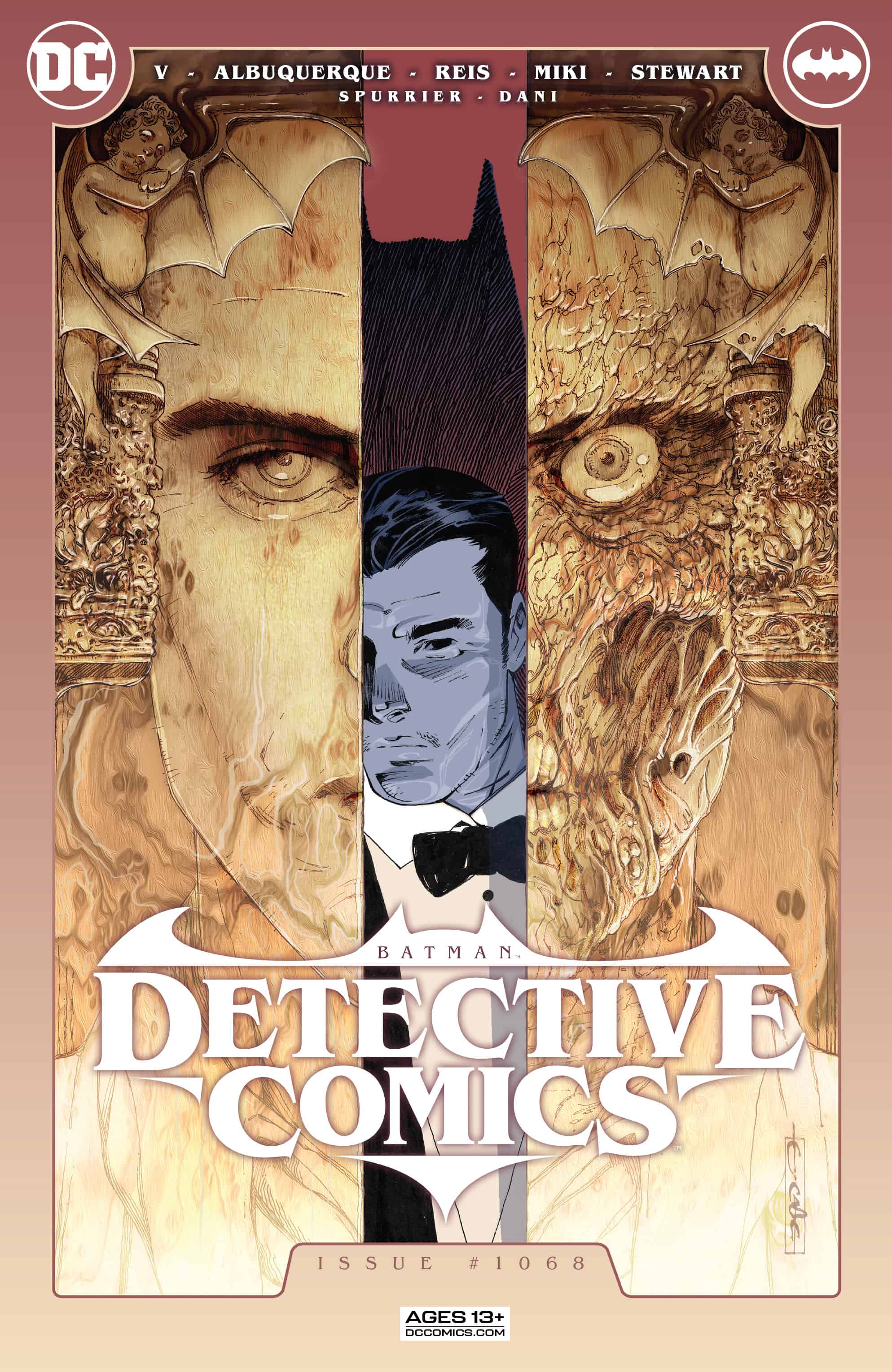 The Orghams have arrived and their grand plan to take over has begun to seep into the many fabrics of Gotham. Their supernatural methods distributed the balance of Harvey Dent/Two Face and has led to a face off between Batman and Mr. Freeze. After infiltrating Wayne Industries, the Narrows of the city are now on fire. It is evident this is the beginning of a meticulous plan that is far from over.

For more insight, be sure to read last issue’s review here!

Detective Comics #1068 is a high point in an already stellar run from Ram V. From its epic scale, to its moment of humanity, readers are in for a treat as Act 1 concludes.

Issue #1068 begins with Batman descending the Narrows of Gotham—a recently attacked part of the city that is now engulfed in flames and destruction. Meanwhile, the Orghams are using their Azmer, a supernatural chemical, to turn disenfranchised citizens into mindless cannon fodder for their army. Witnessing all of this is Harvey Dent and his dual personality Two Face. It’s chaos and madness and tied together well in this issue.

Ram V used the word, “opera” to describe his Detective Comics run in several interviews and his story is living up to the description. The slow burn of the Overture and the explosive end of Act I has me excited about how this story will continue to unfold.

The thing about issue #1068 is how the pacing manages to feel intense while giving readers an insight into Harvey Dent/Two-Face. It’s a point of view I was not expecting, and in the wrong hands could falter in its goal. V crafts an internal dialogue between Dent/Two-Face that elevates the villain in his complexity. The use of him as a narrator as Batman takes on supernatural enemies guided by the Orghams is clever and shows a sense of humanity.

It’s damn good writing and matched well by the art of Ivan Reis and Rafael Albuquerque. Inked by Danny Miki with colors by Dave Stewart, this collaborative team has created a timeless visual feast. The character designs, brutal fight scenes, and internal conflict between Dent/Two-Face are dramatic as they are intense. With dialogue-heavy moments in the issue, the lettering done by Ariana Maher are tonally balanced. I could hear the inflection of emphasized words and the dual dialects of Dent/Two-Face.

With Dent/Two-Face being at the forefront, I would be remiss if I did not mention the beautiful morbid cover done by Evan Cagle. Throughout this run, the borders of the issues change in color to match the story, and this issue brings in the fire yellows remarkably. This issue is about Batman and Dent/Two-Face. The cover tells readers right at the beginning and serves as a well-done preview for what lies in store in the pages after.

The backup story continues the tone of an opera and the emphasis on music as a connection between the main story.

It’s hard to have a backup story in a comic that readers can get excited about, and yet one could not help but be intrigued by the Jim Gordon story. The mysterious boy he saved feels like a natural fit into the larger story happening, while at the same time feeling self-contained. Additionally, the use of music as a part of the mystery of this new character is done in a way that matches the operatic theme of the main story.

This issue set a high standard for Detective Comics. Next month cannot get here fast enough for issue #1069! The crescendo of the ending of this issue and completion of Act 1 gives me full faith that the entire creative team are just getting started in this story.

Detective Comics #1068: A Duality of Ego and Humanity

Seth Adrian is a lifelong comic book fan and believes comics are for everyone. He appreciates every opportunity to support independent and creator owned content and is a Reviewer with Comic Watch. In addition to getting through his ever growing comic book reading list, he enjoys toy photography and cooking.He lives in Houston with his wife, their daughter and labrador retriever.