Detective Comics #997: The Cowl Eats its Own 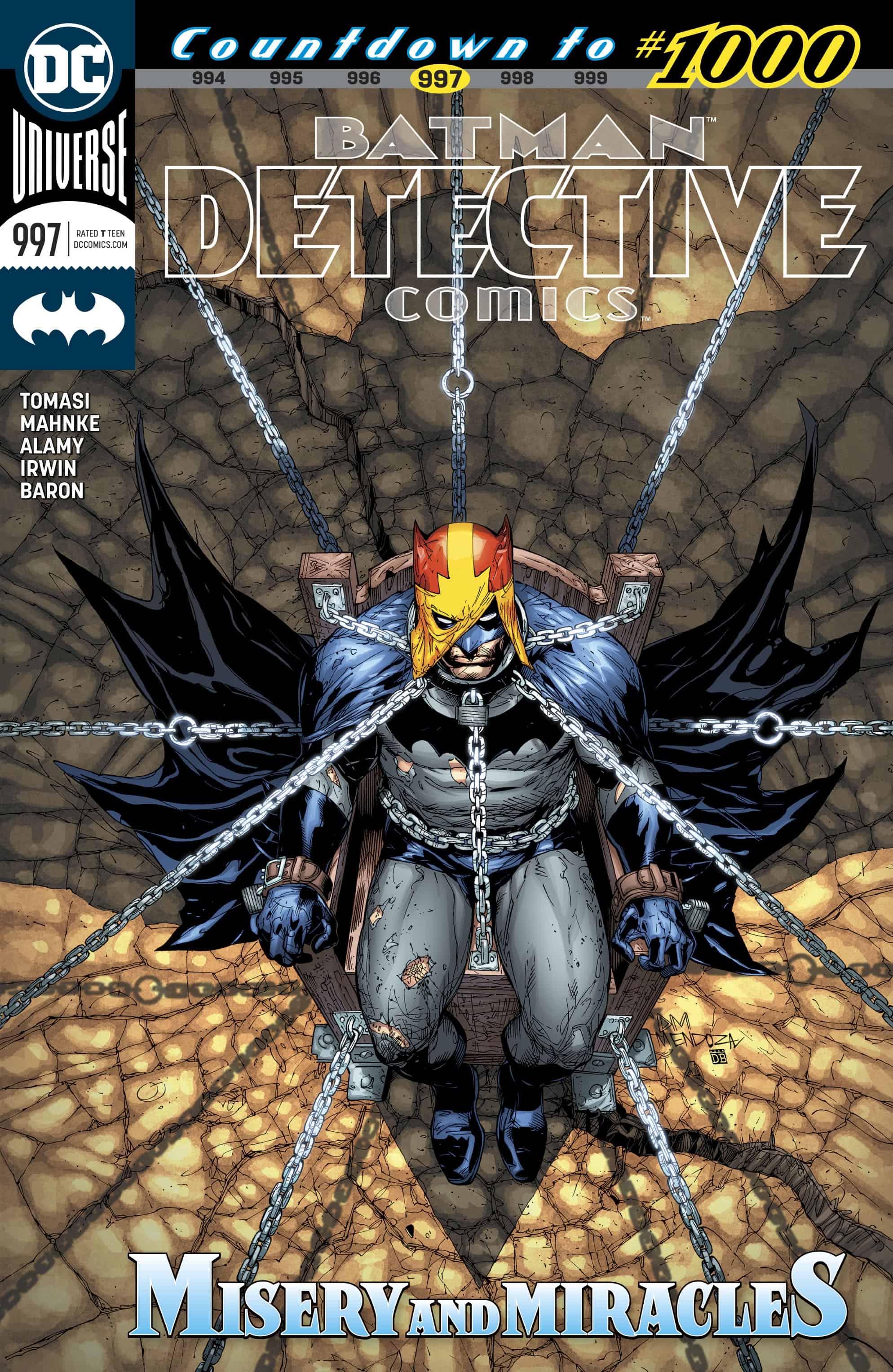 There’s no man on Earth more convinced that he knows what makes Batman tick than Dr. Hugo Strange! Which makes him a natural target for the thing that’s hunting Batman, unless Batman gets there first!

The countdown to issue #1000 continues as Batman and Thaddeus Brown must escape a deathly trap and fight all of Bruce’s darkest nightmares brought to life! 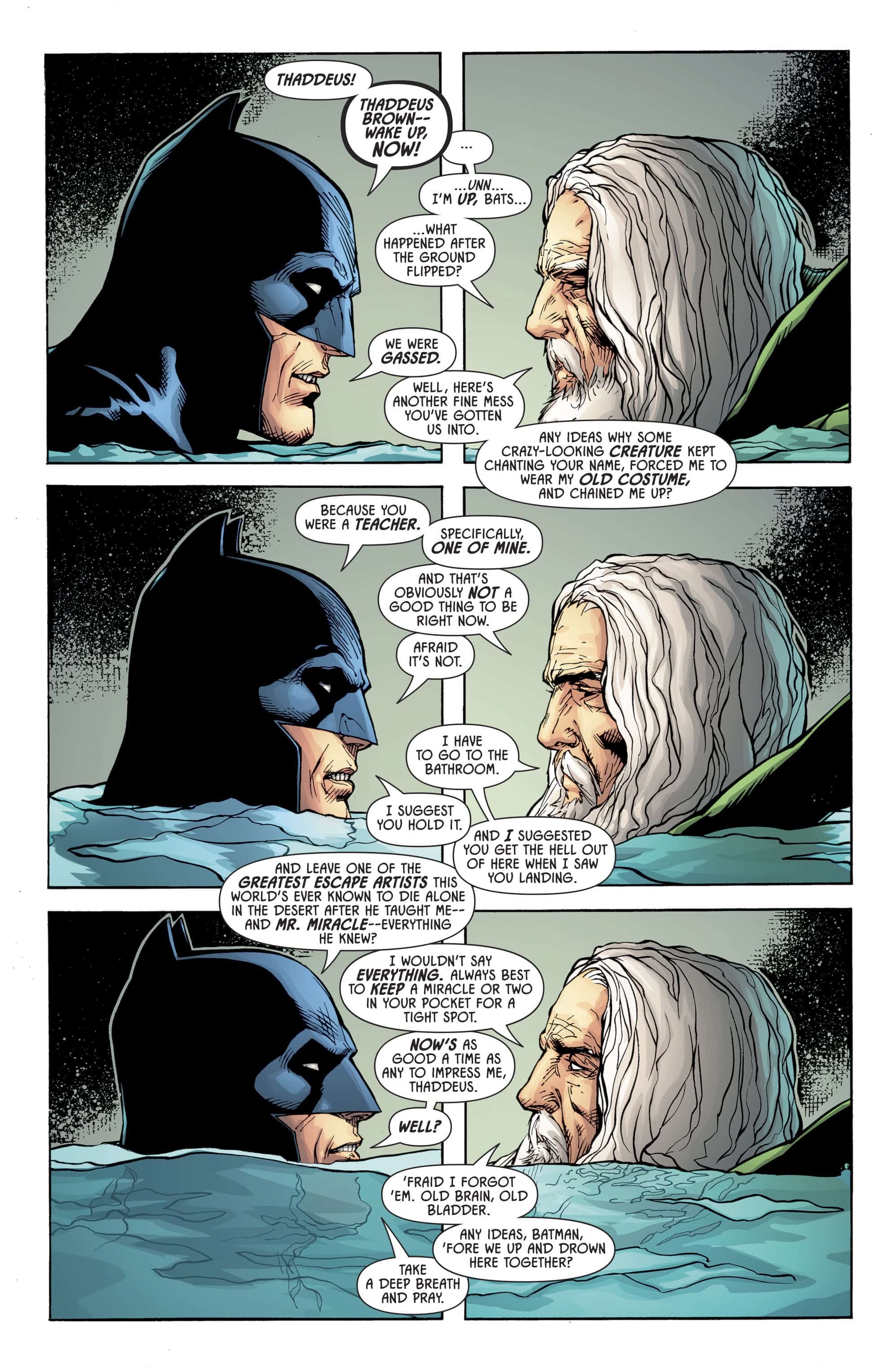 We left off last issue with Batman being caught in a trap with the first Miracle Man, Thaddeus Brown. It was a solid story that left me eager to find out not only how they escape this trap, but also how the creative team would explore Batman’s uniquely tragic past. Luckily, Detective Comics #997 doesn’t disappoint.

Beginning with an extended sequence showing Batman’s curious escape and eventual rescue of Thaddeus Brown, the issue is able to start off seemingly in the middle of a terrible situation that only gets worse. This gives a great chance to show off some ingenuity, but it also helps to give the story a classic touch. Batman bound by leather straps and stuck in a flooded room filled with sharks may not be the most original concept, but it’s a quintessential escape scenario that contributes to the overall feel of this arc and its focus on a classic vision of the character.

Their escape is both daring and dramatic, but what Batman finds just moments after saving Thaddeus Brown is far worse than what they have seen before. A nightmare version of Batman that uses the people he cares for most against him proves to be an excellent way to once again for the Dark Knight to confront his own fears. This is a point that has been made multiple times as we get closer to issue #1000 and it is emphasized when the nightmare Batman says “the cowl eats its own”.

We finish the issue with a quick trip to Dr. Hugo Strange’s lab north of Gotham City and what is probably one of the most beautiful splash pages in this creative team’s entire arc so far. Doug Mahnke Christian Alamy, Mark Irwin & David Baron deliver outstanding visuals throughout the entire issue, but Batman’s rage as he comes for Strange with lightning behind him once again strikes a classic chord that just works really well in the issue.

Overall, Detective Comics #997 is a wildly exciting spectacle filled with plenty of intense action to keep fans engaged. As the story continues to unravel closer to issue #1000, it will be interesting to see how mystery starts to come together!

Detective Comics #997 brings us closer to the anticipated issue #1000 with a daring escape and a brutal fight that is nothing short of nightmare fuel. The creative team has managed to tell a classic story that explores Batman’s complicated past while ensuring that not too many secrets are spilled…just yet!

Detective Comics #997: The Cowl Eats its Own