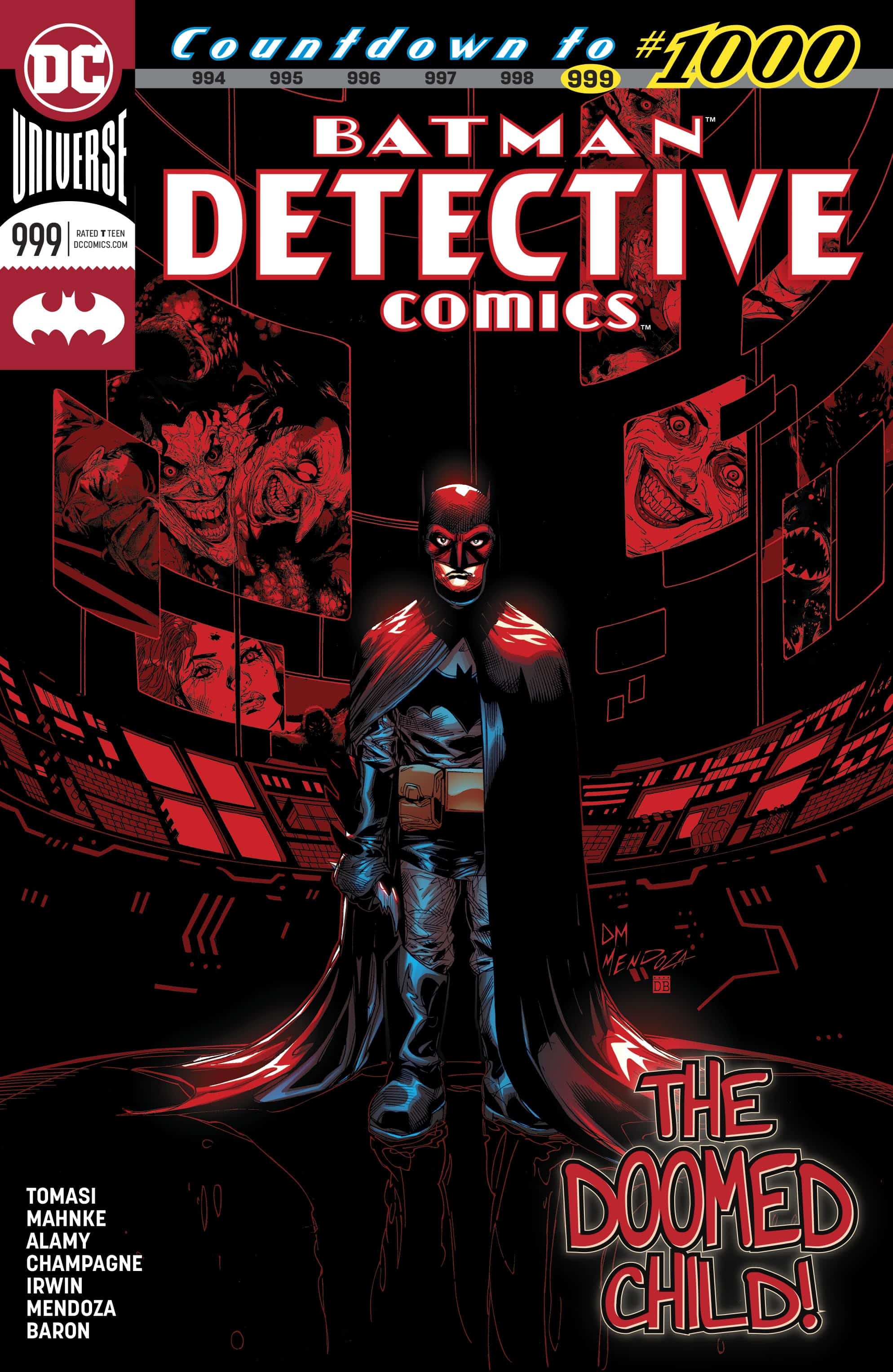 The truth behind the gauntlet Batman has been forced to run—a violent odyssey that endangered the lives of everyone who made him who he is—is revealed at last...and the mastermind working to unmake the Batman must be seen to be believed! Is there a goal here beyond destruction? Will Batman emerge stronger...or with a mortal wound at the exact moment that his most dangerous challenge yet is on the horizon in next month’s DETECTIVE COMICS #1000?

The World’s Greatest Detective’s latest deadly mystery finally unravels into a reality-warping scenario, delving into the darkest sacrifices Bruce has made in order to wear the cowl. 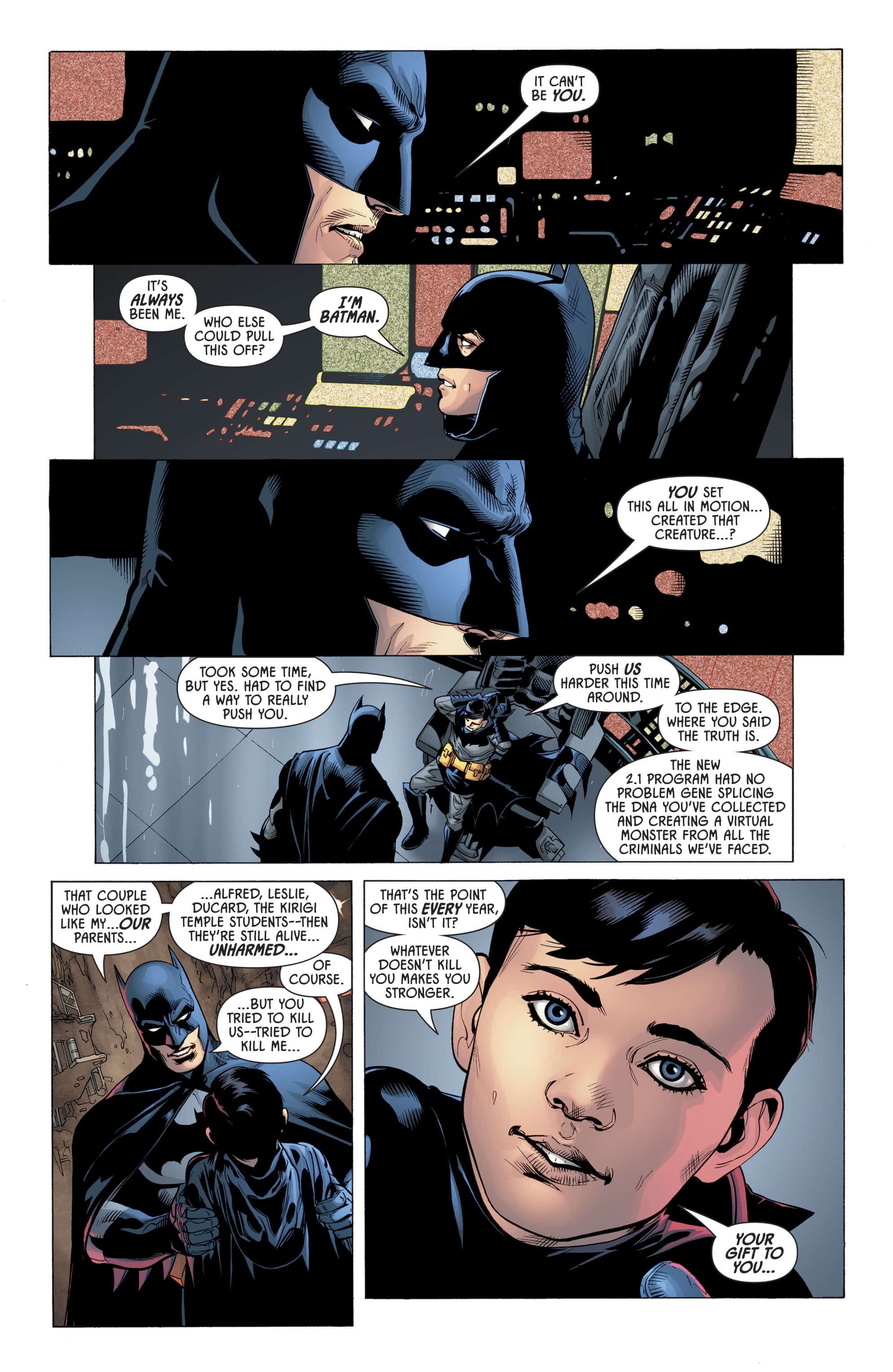 With issue #1000 just around the corner, Tomasi’s oftentimes brutal mystery comes to a close by diving deep into Batman’s most personal emotional struggles. Though the child version of Batman seemed juvenile at first, the duality of their fight against one another morphs into something much more complex. It is in this fight where the mystery is finally exposed, revealing the annual training program Bruce had designed to keep his abilities at peak performance.

I had mixed feelings at the prospect of what this story began to offer at first. It felt like a stereotypical dream sequence with a sci-fi twist, but Tomasi and Mahnke’s status as veterans in the industry luckily shines through as the story continues to develop. Bruce’s youth is one of the toughest sacrifices he made to become Batman, and this creative team doesn’t pull any punches in emphasizing the trauma this caused on him. The visual of an older Bruce burying himself as a child is a heartbreaking depiction of the true costs of wearing the cowl, but as always, Batman continues on.

The true success of this arc from Tomasi, Mahnke and company stems from its willingness to delve into the pain of loss that Bruce has endured. Starting with his own parents, then expanding into the outside fears imparted on him by his family and the many villains he has confronted, before finally ending with his own childhood innocence. The vicious circle, though now complete, serves as a reminder for both the emotional weight of his past and how the pain he has suffered continues to push him to be the very best. It’s a Batman story that will almost never grow tiresome.

With almost half of the issue being an extended fight sequence, it was a unique challenge to put the pieces of this mystery together, but the creative team including Peter Tomasi, Doug Mahnke, Christian Alamy, Keith Champagne, Mark Irwin, Jaime Mendoz, David Baron and Rob Leigh do a magnificent job. The action sequences are dynamic and engaging without hindering the development of the mystery, making for an enjoyable issue overall.

With the closing of this chapter, we now find ourselves upon the highly anticipated Detective Comics #1000. And what better way to lead up to this historical moment than diving deep into the psychological conflicts that have helped make The Dark Knight such an appealing character over the years?

Detective Comics #999 delves into the traumatic sacrifices Bruce has made to wear the cowl, showing both his mental fortitude and unique depth of emotion. With the help of some powerful visuals, this issue is sure to entertain any fan of The Dark Knight.