The Action Rises in Fall of the Batmen, Part 4 (Detective Comics #972) 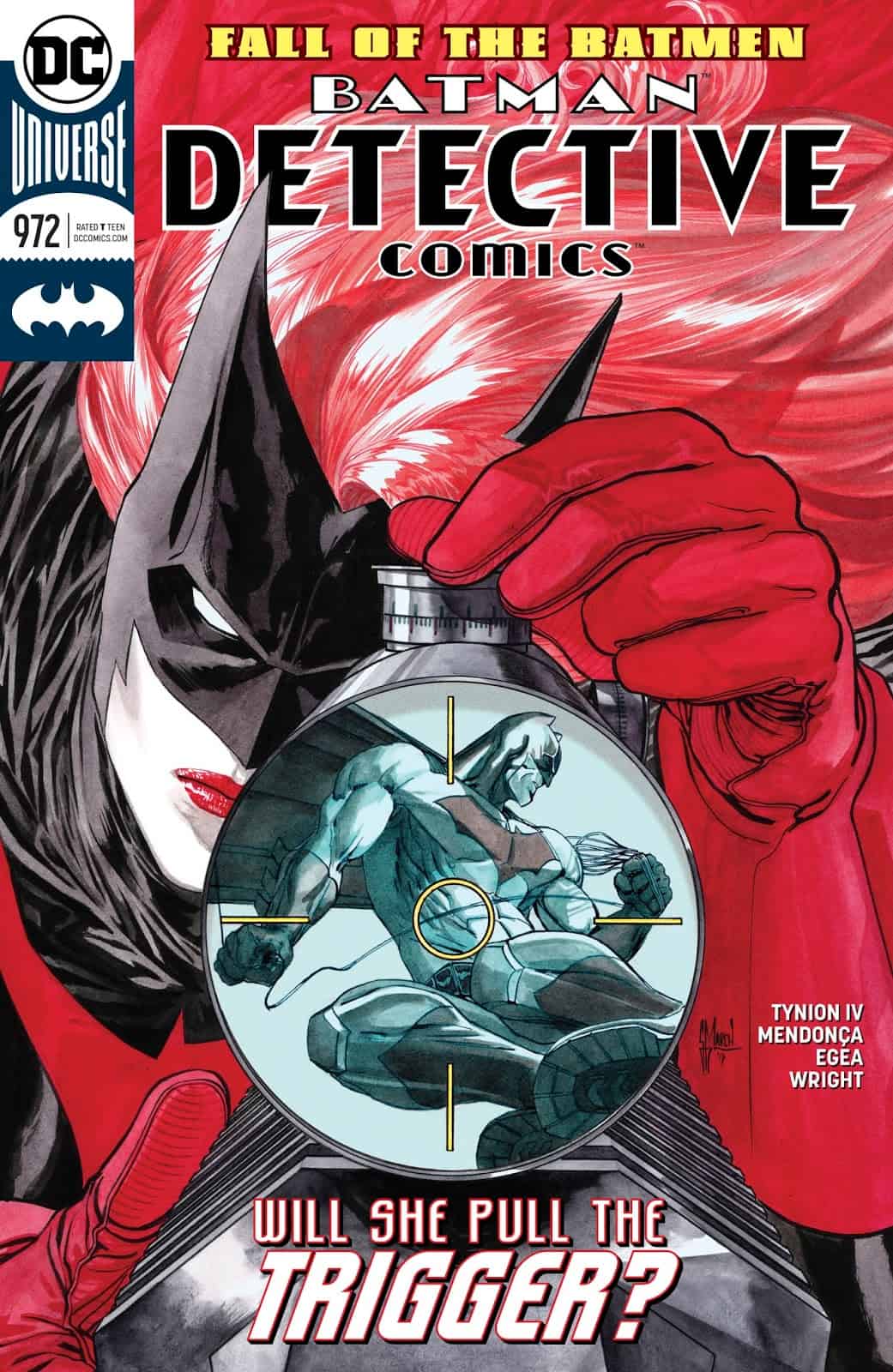 Batman beats the Victim Syndicate! Arkham Asylum has been secured.  Now the Syndicate plays the ace up their sleeve—they’ve driven Clayface insane and unleashed him on Gotham.  His first target: the Gotham Knights! 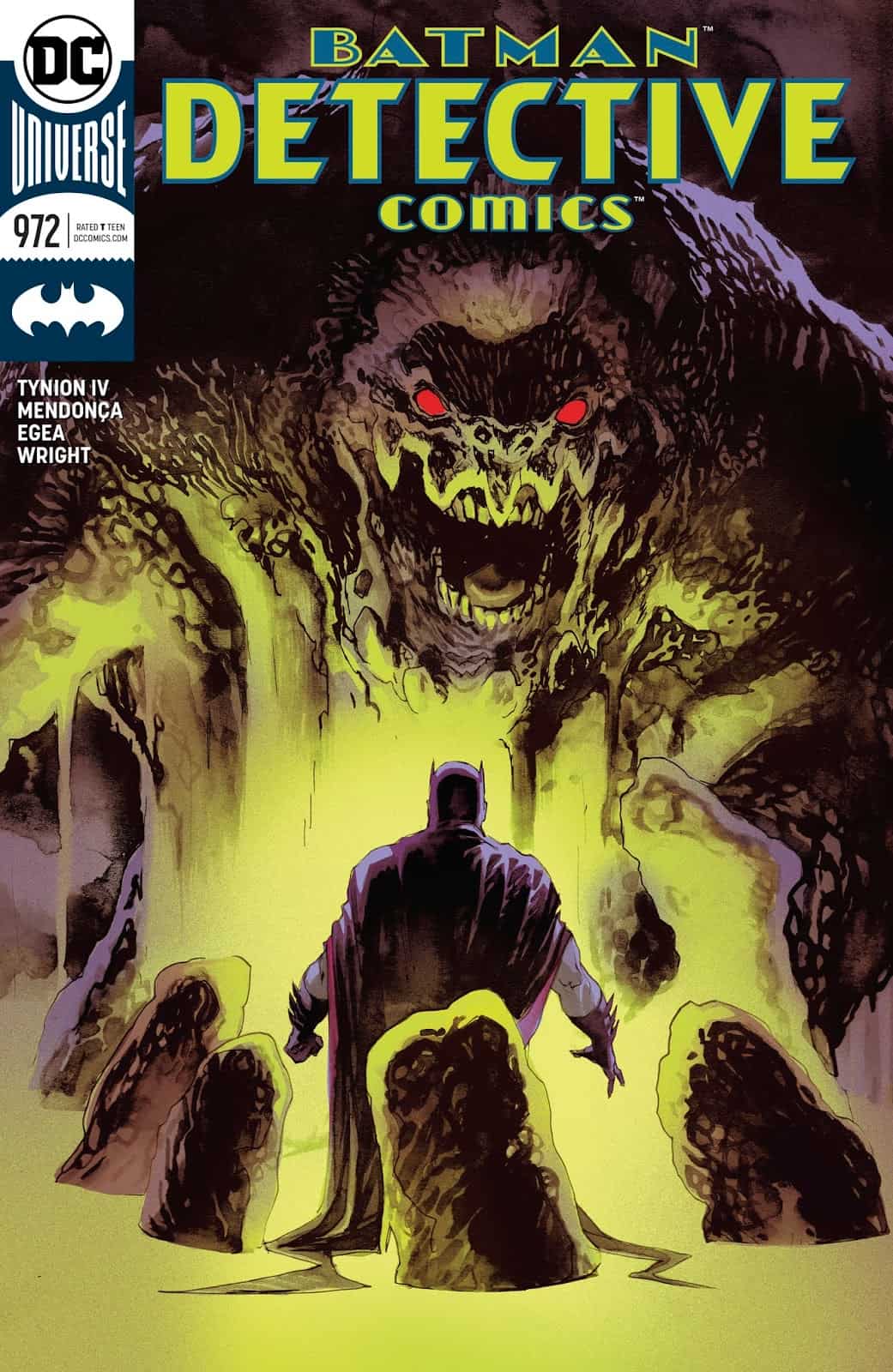 What You Need to Know:
Batman turned himself into the Victim Syndicate after they took over Arkham Asylum and beat them into submission.  But the leader of the Syndicate, the First Victim, laughs and releases Clayface who they’ve been torturing until he cracked and went insane with rage.  And now all Clayface wants to do is kill Batman and the Gotham Knights.

What You’ll Find Out:
Clayface announces he’s really a monster and a bad guy who hurts people as he attacks Batman.  Then he threatens to go to the Belfry and kill Tim Drake for real.  Batman doesn’t buy Clayface’s assertions that he’s truly evil, grabs Mr. Freeze’s ice gun and freezes Clayface solid.  Then he realizes this Clayface is only a decoy.  He radios Batwoman to warn the team.

We get one page of Batman and Mayor Akins arguing with Akins insisting he gives up on trying to rehabilitate Clayface since he’s a monster.  “So am I,” answers Batman and promises to fix everything. (Nice comeback.)

Anarky and the First Victim are in front of a laptop viewing the protests they stirred up to build animosity towards Batman.  Anarky recommends that First Victim goes to the protests to rally support, but the Victim says he wants to instead watch Batman and his team die.

Another 2 pages of talking heads follow that.  Tynion has Dr. October babble for 7 panels on how Clayface could potentially be saved by her experimental serum, but he’ll still be damaged, yet he could be saved, he’s in so much pain, blah-blah-blah.  Then 4 more panels of Red Robin and Spoiler arguing about the protestors before he wonders where Batwoman is and radios her.

Batwoman is meeting her father, Jacob Kane, who gives her a rifle that can destabilize Clayface’s molecular structure and kill him.  She says Batman would never agree to that and he replies that he has faith she can take it apart and put it together again so it won’t kill Clayface.  Then he leaves. 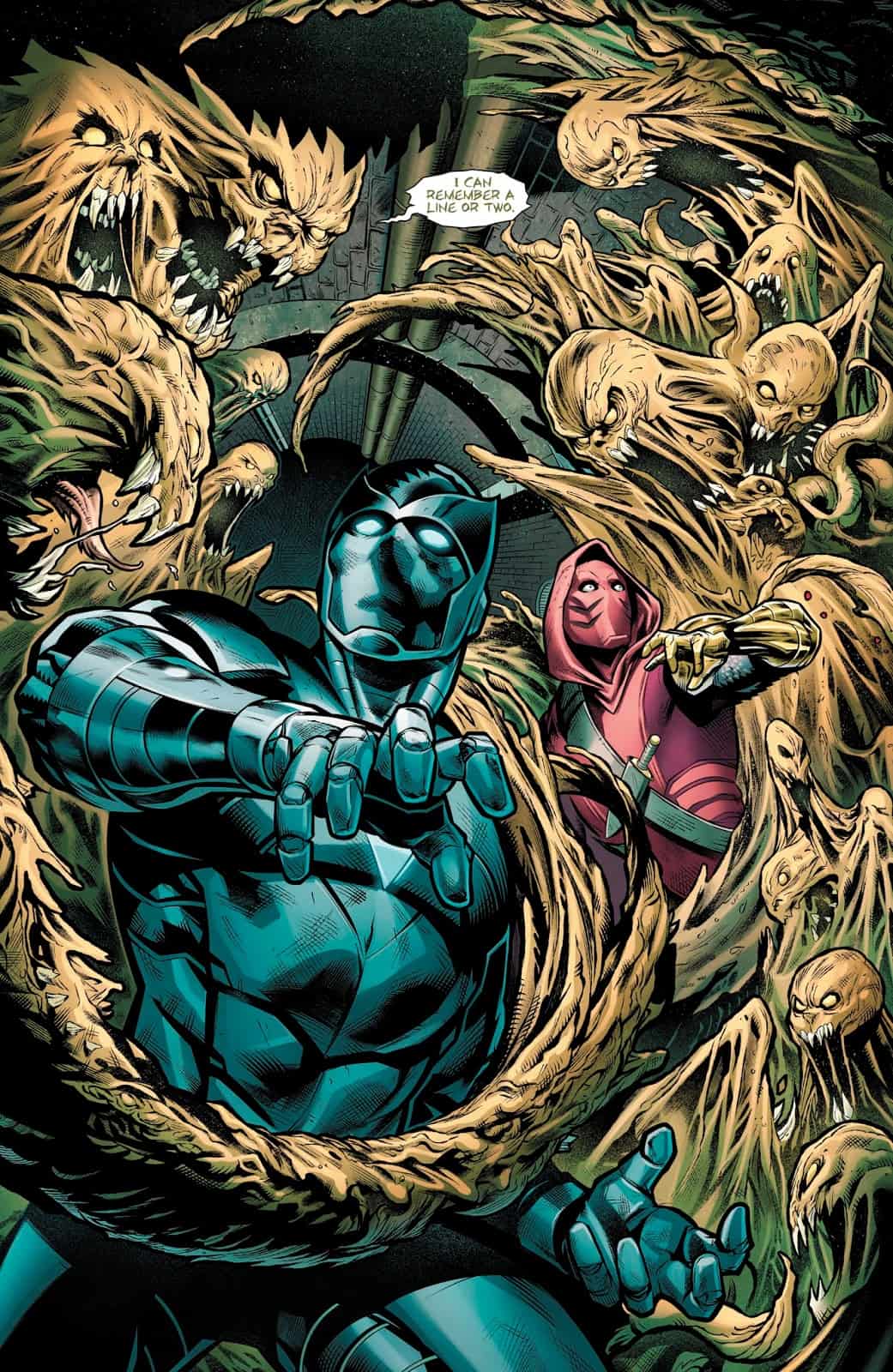 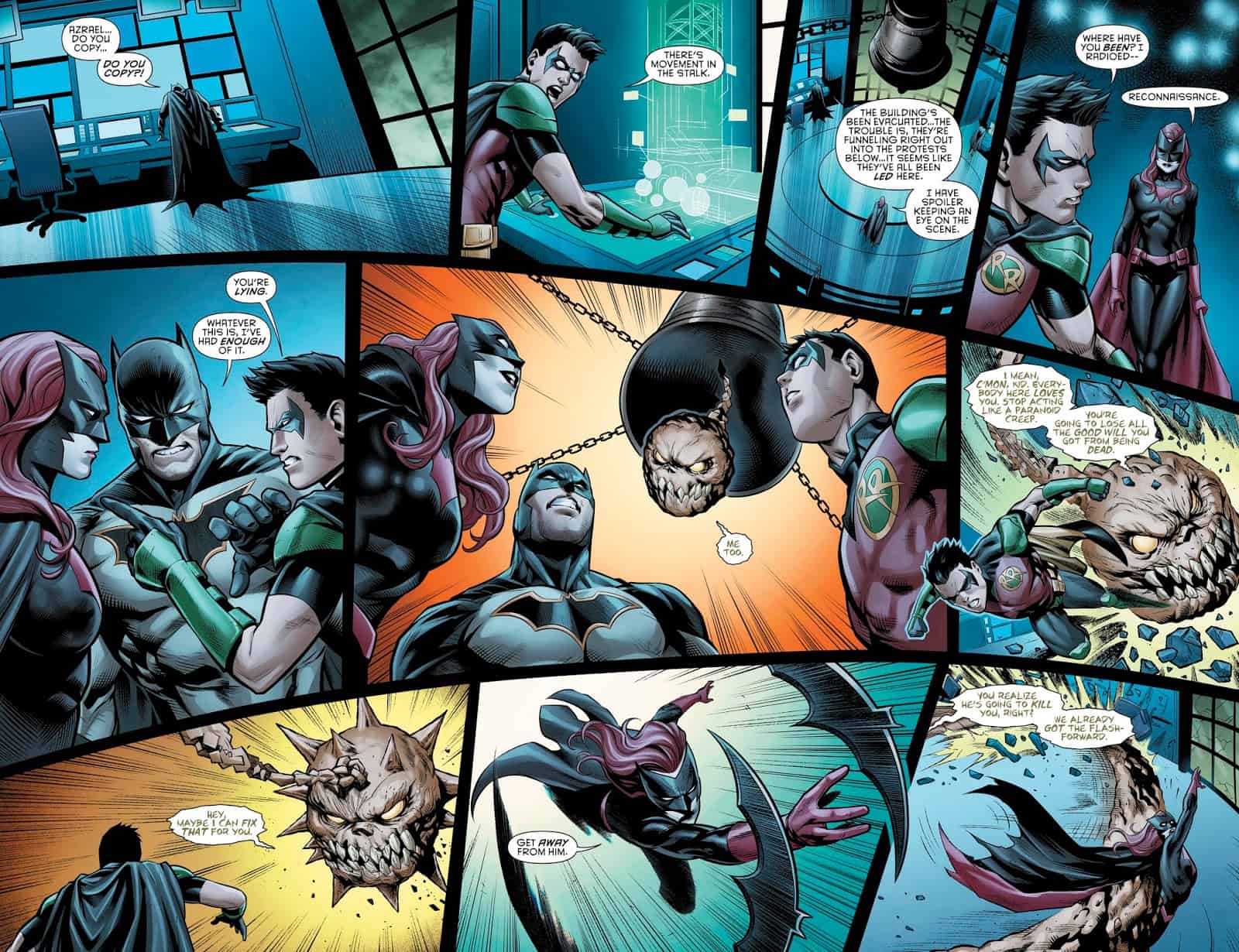 Clayface threatens to kill Batwoman, but Batman stops him.  Then he asks Batman if he’s going to reform Two-Face or The Joker next and claims he was using the Gotham Knights to stay out of Arkham:  “I don’t care about any of you!” 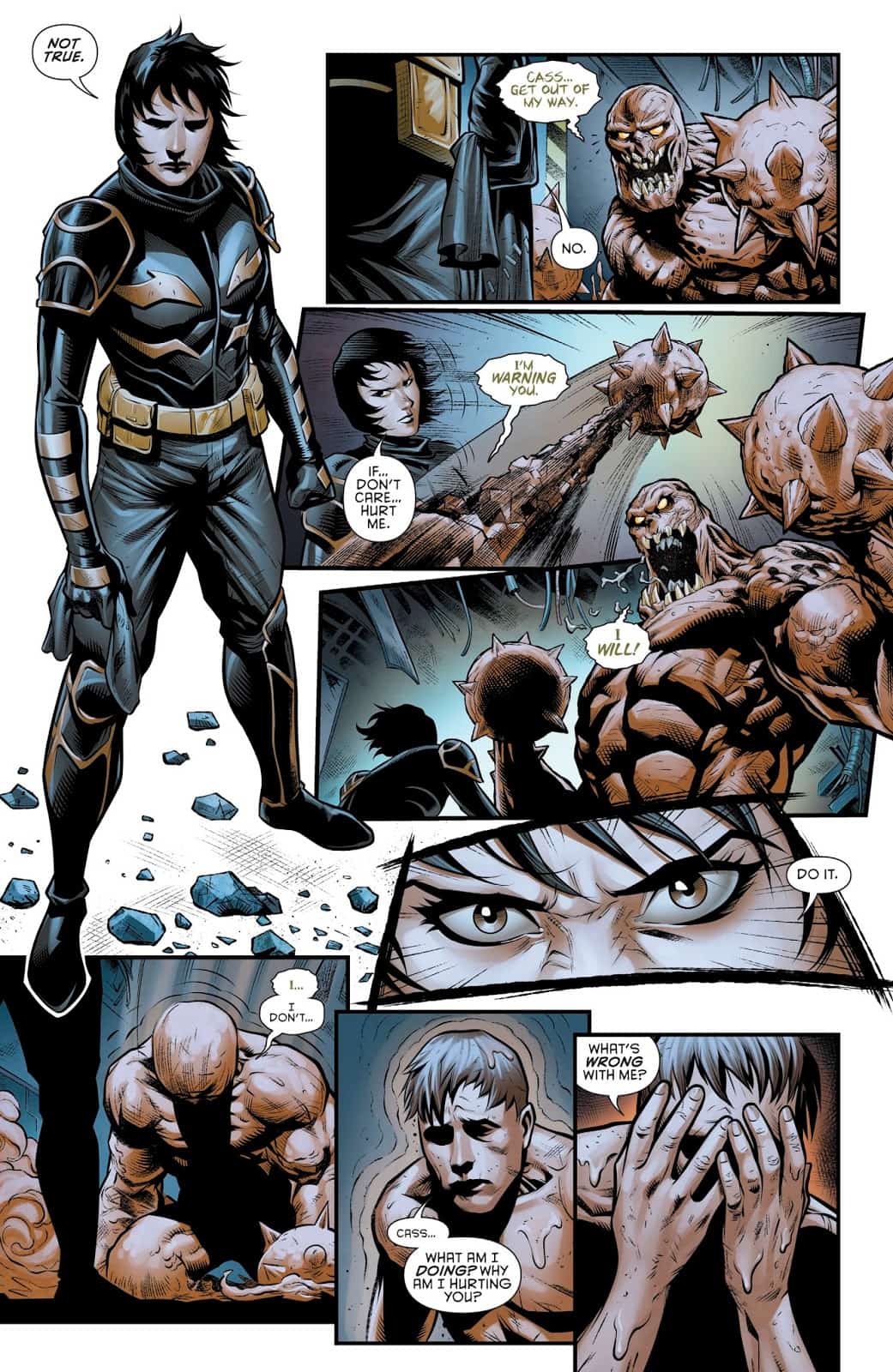 An alarm goes off warning them that Clayface hit the release valves for the Mudroom.  All of the excess mass from Clayface’s body is about to overwhelm him right when Cassandra has him regaining control of himself.  The problem I have with that is, wasn’t all of that clay a part of his body before?  So why would he not be able to control something that was always a part of him in the past?

It ends with the First Victim cheering from a helicopter as a Godzilla-sized Clayface bursts out of the top of the Belfry and roars.

We got a chapter of this arc that was better than the two that preceded it; still a few too many talking heads, though.  It also helps that we weren’t swamped with pages upon pages of Tynion trying to convince us that Tim Drake is a budding fascist who plans to turn Gotham into a police state.

The characterization of Clayface was wordy but believable.  His pain was palpable.  That’s one of the undeniable improvements in Tynion’s script this time.  Everyone is behaving in a more logical fashion and no one’s personality does any total 180’s.

Batwoman’s interaction with her father Jacob is a good example.  Kate listens to his claim of honest cooperation but maintains reasonable skepticism.  Orphan’s attempt to help Clayface regain his sanity isn’t melodramatic but instead uses as few words as possible.  The bond of friendship between them that has been built over the past year makes that scene work—and unlike the tedious exposition by Dr. October, it works because it’s short, simple and sweet.

That’s the hallmark of effective characterization when one can write a few panels of characters interacting and the emotional impact can be conveyed in as few words as possible.

The other high point to this issue was how quickly and smoothly the action moves.  The battles with Clayface were slightly garrulous, but they didn’t drag.  There was a real sense of danger.  Clayface hasn’t been this menacing in years and the loss of his better self after months working at redemption gave the damage greater impact.

Miguel Mendonca still has room to grow as an artist.  But his talent shows in his panel layouts and fight sequences.  He has a bright future ahead of him.  However, Diana Egea’s inks may not be the best match for Mendonca’s pencils.  Other inkers on his pencils (such as on issues of Titans) seemed a more natural fit.  Egea’s inks tend to make Mendonca’s pencils look cartoony.

And though it was a bit over the top, that last page cliffhanger of Clayface going full-on kaiju was pretty damn epic.

After a longwinded and preposterous script from Tynion last issue, this one was a big improvement.  Multiple panels of people talking to each other for many pages was kept to a minimum.  The battles were exciting and fun to read.  Characters like Red Robin and Batwoman evolved more naturally as they moved farther down more dangerous paths.  Things are picking up and the arc appears to be heading toward hopefully a satisfying climax.