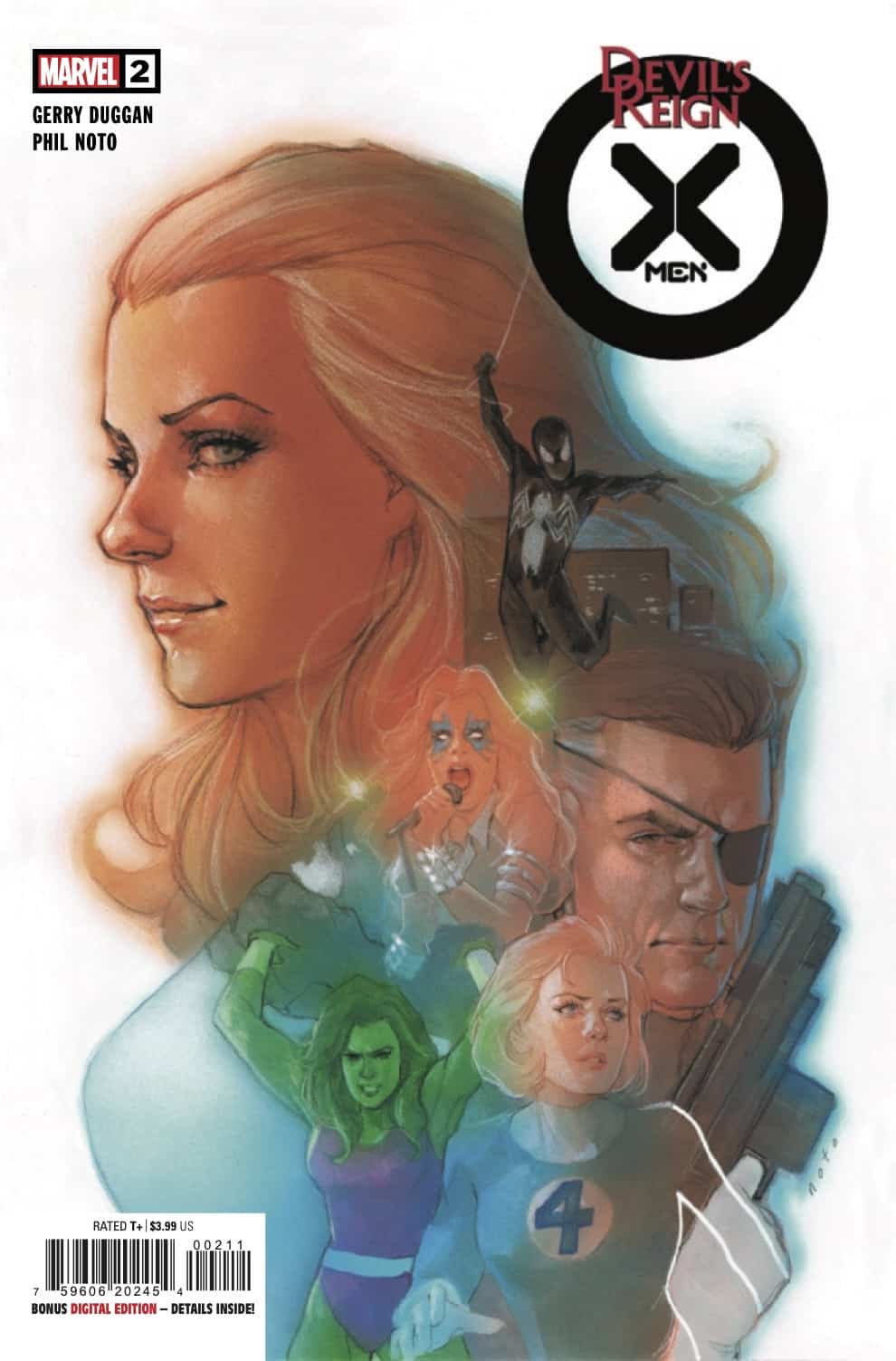 While the X-Men have been able to protect their Treehouse
in Central Park from Fisk’s Thunderbolts, Emma Frost has
found herself fighting her own battle with Fisk alone, as he
dredges up the dark history between them and lays the murder
of a young girl at Emma’s feet -- but what really happened
all those years ago?

Devil’s Reign: X-Men #2 takes us back to the past to further uncover Emma Frost’s involvement in the disappearance of a young girl, and the threat that poses to her in present-day. As the cover promises, the issue contains a coterie of 1980s cameos, from heroes that Emma blackmailed and manipulated in service of Kingpin’s criminal empire, to a somewhat superfluous yet fun appearance by symbiote-suited Spider-man. The highlight, though, is a long overdue team-up with Elektra, a character with a reputation so like Emma’s that their interaction consists of cold, snarky arguments about whose morality is worse. Phil Noto’s loose, sketchy art style complements the seedy atmosphere of New York’s criminal underworld and the debauchery of the Hellfire Club in a way that’s reminiscent of pulp noir.

A brilliant sequence is the apartment hallway fight between Elektra, Spider-Man, and Fisk’s goons, where the violence feels brutal and claustrophobic as the walls and floor quickly become lined with blood and webbing. The fighting is viewed from a low angle and obscured in the background of panels, putting the reader in the shoes of the child that Emma is attempting to distract and lead to safety. While Duggan clearly has fun returning Emma to her old role of devious femme fatale, he doesn’t forget to foreshadow her eventual redemption with small moments of humanity, like the genuine concern she feels for the young girl’s safety, and the sympathy and appreciation she shows Peter Parker. 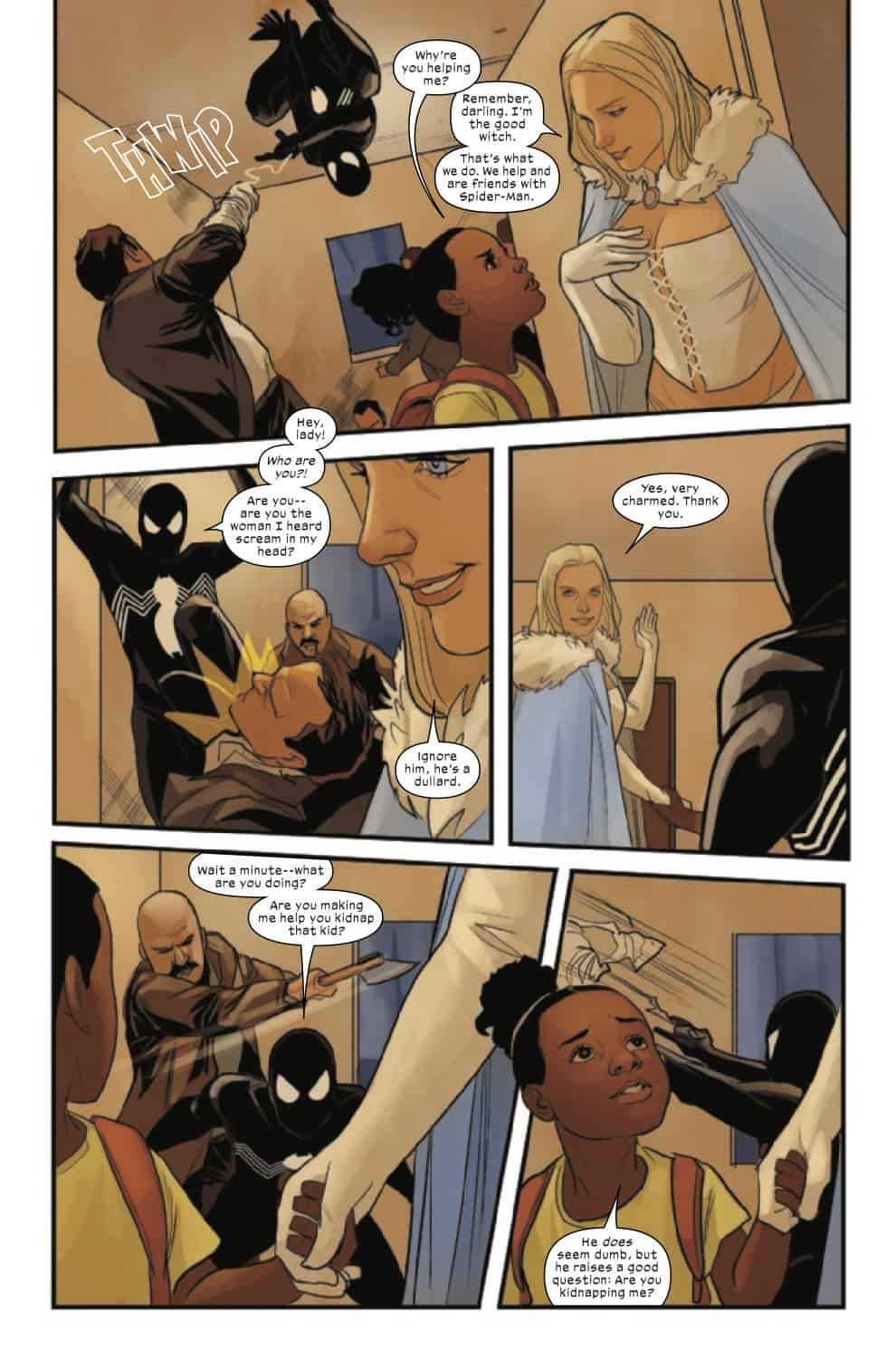 The tail end of the issue has Emma making questionable decisions that feel jarring compared to her calculated prowess established in the previous pages. When your objective is to maintain a low profile, wandering around London in pirate regalia and sending a van of police careening into a canal isn’t recommended. Emma is immediately apprehended with a disappointing level of ease that makes one nostalgic for an earlier era, when Ms. Frost could hold her own against avengers, inhumans, and a myriad of villains. Seriously, a single page of Emma attempting to kick or punch her way to freedom, even if unsuccessful, would’ve been appreciated. I’m sure some Marvel fan out there has spent their life anticipating the ultimate showdown between the White Queen and Union Jack, what a shame that they’ll have to continue waiting.

While the issue’s ending is seemingly grim, the final narrative box suggests that Emma may have more control over the situation than she appears. It’s possible that the reckless behavior and arrest are the first steps in a larger plan to dupe Wilson Fisk in his game of shady politics. With only one issue remaining in this three-part miniseries, I’m curious to see how the creative team wraps up the primary narrative and the lingering questions created along the way. What became of the missing girl? And, more importantly, will these revelations have long-term ramifications regarding Emma’s relationship with the hero community, her position on the Quiet Council, and her public perception as a representative of Krakoa? Probably not. In fact, I’m willing to bet that all consequences will be quickly brushed under the rug. Skepticism aside, I do believe that Gerry Duggan and Phil Noto have made the absolute best of a presumably mandated event tie-in by filling in the blanks in the colorful history of one of Marvel’s most layered and compelling heroines.

Devil's Reign: X-Men #2 is an intriguing middle chapter that pulls back the curtain on a hidden, darker side of our favorite heroes' and villains' histories. Supported by Phil Noto's excellent art, Gerry Duggan provides a throw-back adventure that doubles as a character study for Emma Frost, expanding and redefining her role in the Marvel universe.