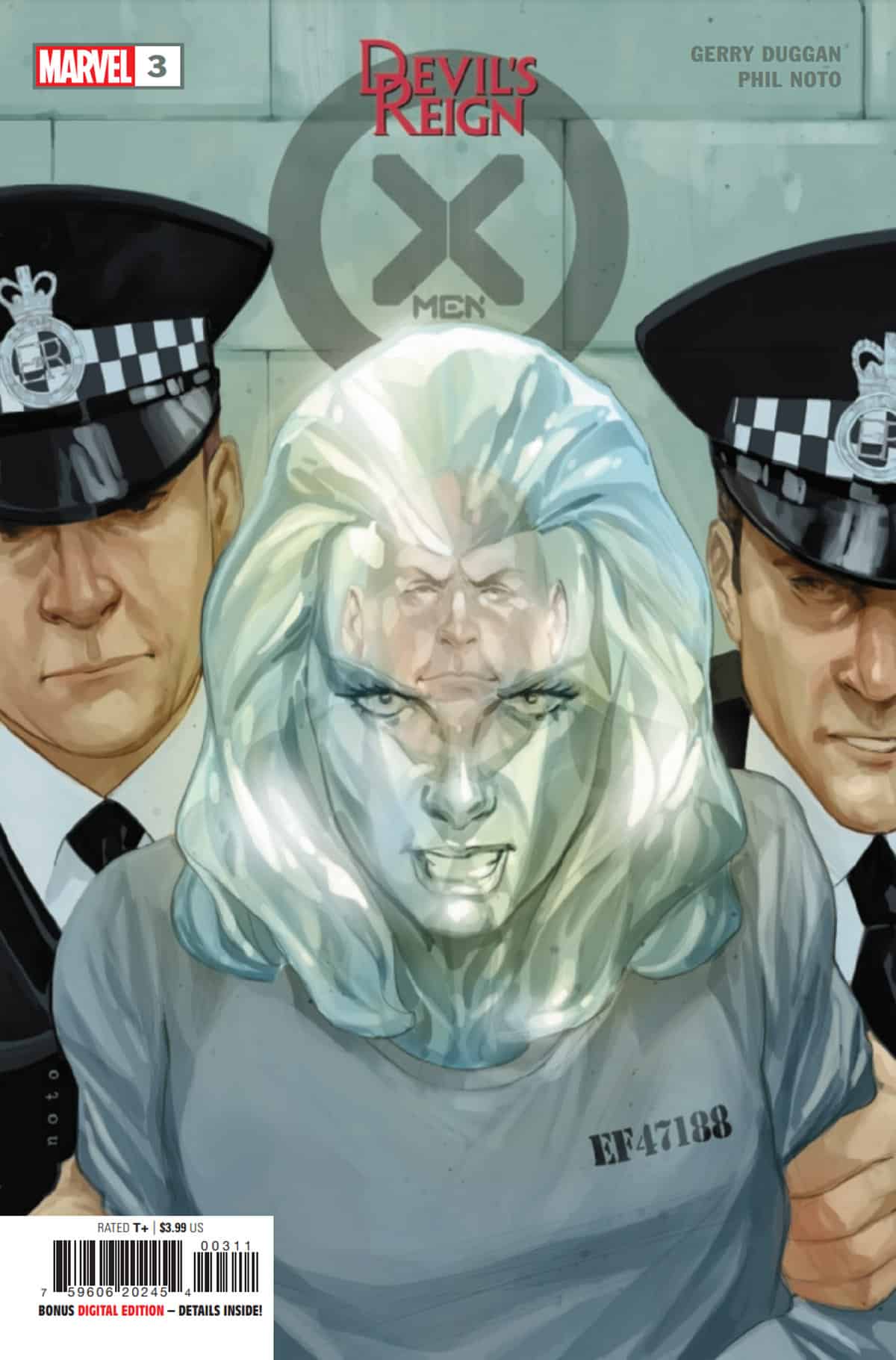 KING TAKES QUEEN! Emma Frost has taken on many opponents as the White Queen, but this time, she may have bitten off more than she can chew. As Kingpin’s plans unfold, forget Krakoa — can Emma even protect herself?

So far in Devil’s Reign: X-Men, the Kingpin tried to extend his assault on New York’s superhero community to the X-Men through diplomatic means. When Emma Frost foiled his efforts, Mayor Fisk connected her to a missing person’s case from their shared criminal past. Frost went to London to clear her name, where we find her to begin this week’s installment of the tie-in series.

This issue begins where the last issue left off, with Emma’s arrest by British crimefighter Union Jack. Her inevitable escape is a sight to behold. Gerry Duggan, the author of this comic and the main X-Men series, has a solid handle on Frost thanks to his time writing the character in the pages of Marauders. It’s no surprise, then, that the issue’s opening sequence highlights the White Queen’s telepathic talents, resourcefulness, and famous attitude. The stylish action suits the character well.

Later on, we learn the fate of Isabelle, the young girl Emma, Elektra, and a guest-starring Spider-Man rescued in the previous chapter. After the two work together to escape union jack and clear Emma’s (sort of) good name, the White Queen decides a visit with the Kingpin is in order as the mini-series comes to a confrontational conclusion.

This issue is slick and fun, and benefits from the presence of Duggan and artist Phil Noto. The top-shelf creative team helps shake the “pointless tie-in” designation. Duggan seemed to enjoy writing Union Jack, who was well cast as a foil for the legendarily snobbish White Queen. Noto, meanwhile, was predictably reliable but shone particularly during the comic’s opening salvo of action. Few artists have been as prolific in the X-Men line since it relaunched back in 2019.

This issue could more accurately be titled Devil's Regin: White Queen.  Like most tie-ins, it is not necessarily essential reading, adding little to the overall plot of either X-Men or Devil's Reign.  That said, it is well-crafted and worth the read for any Emma Frost enthusiast.