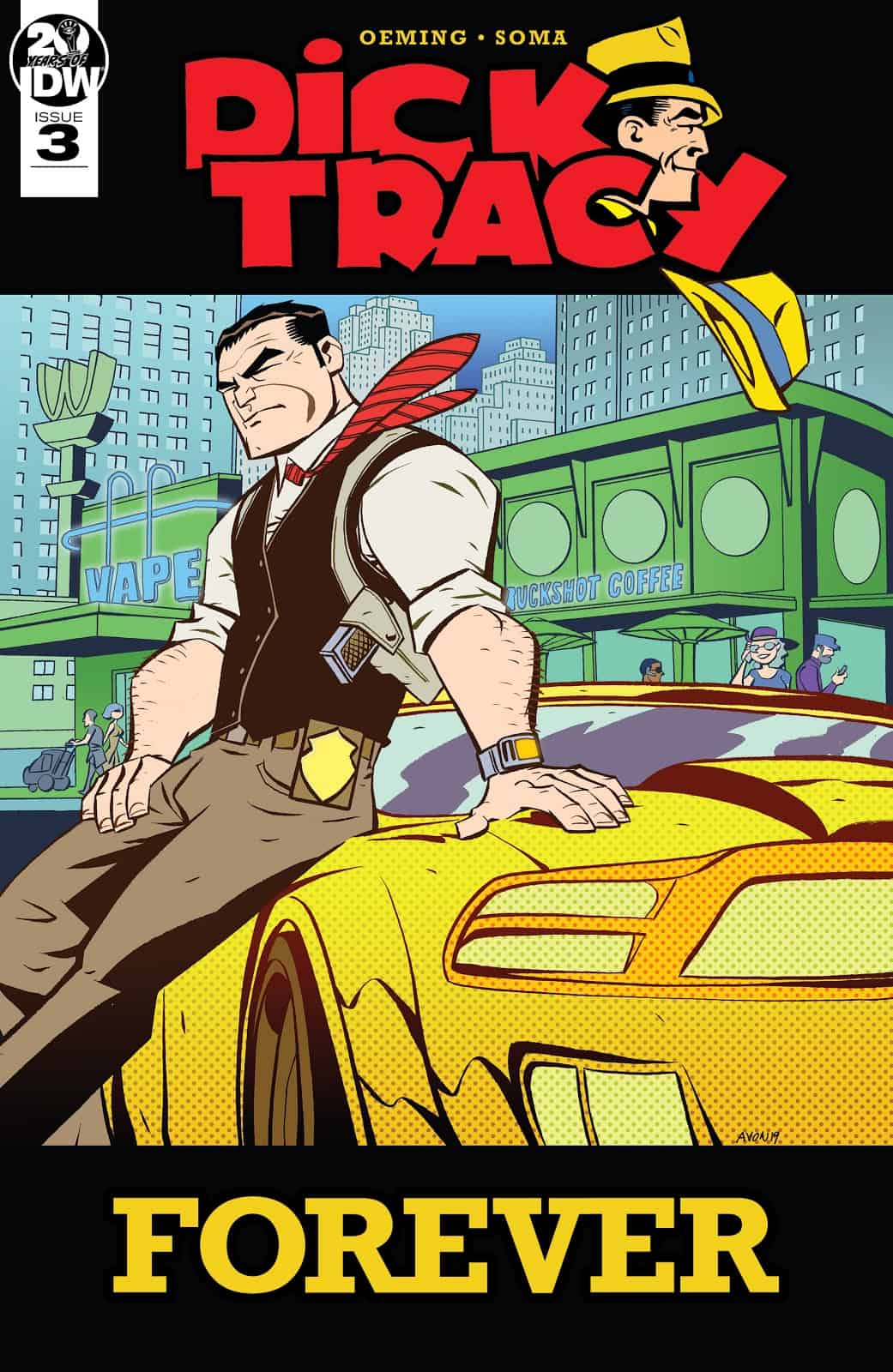 The last two issues of this new Dick Tracy mini series saw us follow the yellow coated officer through the 1930’s and 1950’s battling nazis and coping with the growing advanced technology of his criminal adversaries. We’ve been to the pulp action days of Dick Tracy in his prime, this issues see’s Dick Tracy tackle his greatest threat yet, the 21st century!

By all mean’s I should enjoy this comic. I’d love to dive into a Dick Tracy story adapted for the new millennium to see how his character is reconciled in such a more technologically advanced world. Unfortunately, this issue set in 2021 delivers mixed results as Dic Tracy’s repertoire and even his Rogue’s Gallery don’t exactly make for a perfect fit.

It was little odd that they waited until the third issue to introduce this idea (especially after criminals like Pruneface and Broccoli Rabe have appeared) that Tracy’s classically grotesque enemies are being created from the drugs produce by a genetically modifying “Gek” kit that’s hit the black market. While a little late, I found this to be an interesting idea because of its clever explanation for why these disfigured criminals exist in the first place.

Speaking of villains, as groan inducing as it may be I cant help but concede that 21st century Dick Tracy villains with names such as Auntie Vaxx, The Vape. Hashtag, Trigger Warning, etc. are sadly accurate themes for our era. Whats frustrating thought is that beyond their names the comic doesn’t do much with the villains other than have them be the bad guys that Tracy and Co. have to foil from pinching the Gek kit. There’s even the mugshots of a bunch of interesting looking criminals (Manscape, Knob Nose) in the very beginning of the comic but they don’t appear again past that page.

Come on Oeming don’t leave me hanging! I need to know what became of Derpy Dan! 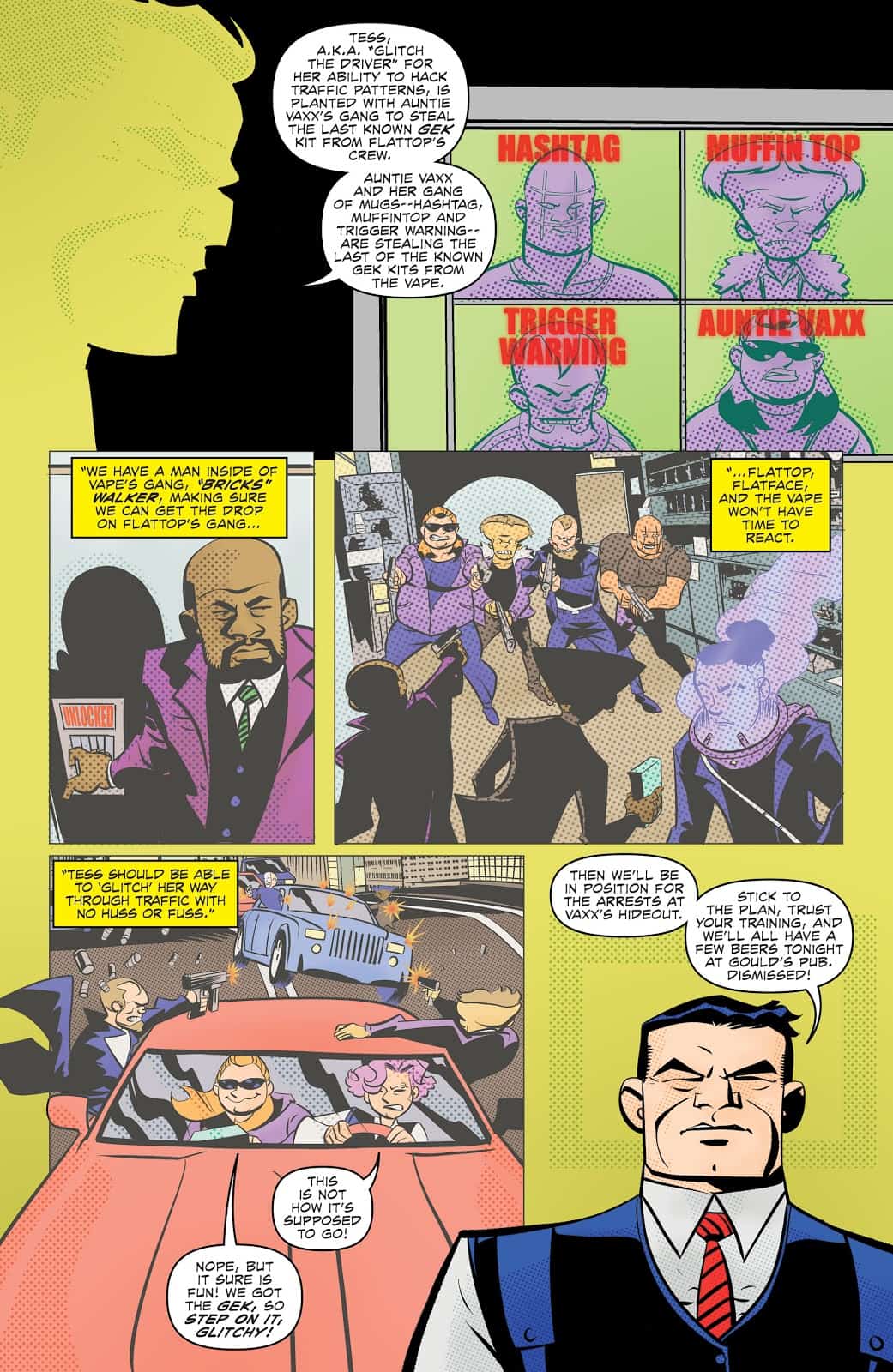 Meanwhile, the biggest conflict for 21st century Dick and his wife Tess is that the illegal Gek kit could be used to heal their comatose adopted son. Its not like Tracy and his wife might have different opinions on when its acceptable to break the law or anything. Oh the morally ambiguity of it all!

Now we get to my biggest issue here. Where Dick Tracy’s wrist watch gadget and other tech may seem futuristic in a pre-WW2 setting, here Tracy is just one of many police officers with high grade crime fighting technology. The wrist watch is such a vital component to Tracy’s character that when you decrease its significance in the story its like you decrease the significance of Tracy himself.

With Oeming’s art I couldn’t help but see an issue of Powers here. Tracy and Tess were essentially drawn like Christian Walker and Deena Pilgrim and this was especially evident in the car chase scene. Despite that gripe, Oeming does deliver on some impressive moments where characters jump into speeding cars, chase one another through the iron beams of a building under construction and finally fall to their deaths in a surprising ending. 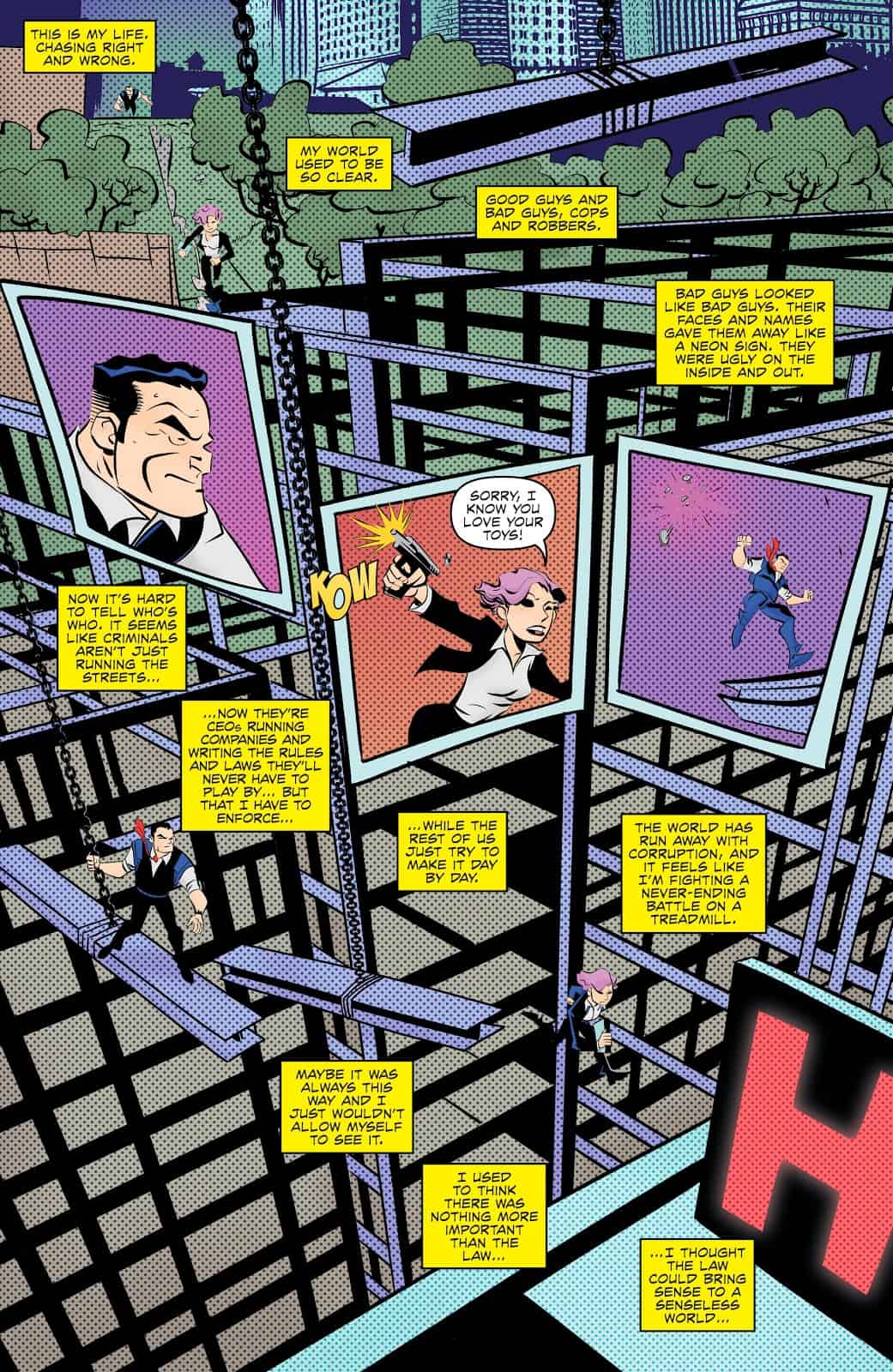 While the final confrontations between Tracy and Tess provided a great moral conflict for the climax of our third Dick Tracy story, I found the rest of the story as a whole was a little lacking. Perhaps my favorite moment of the issue was its ending. I was surprised to read what seemed like a suddenly bleak ending for this incarnation of Tracy and even more surprised when a new Tracy woke up from a VR simulation in a more science fiction themed future.

Perhaps 2031 is a better fit for Tracy than 2021 was.  With only one issue left of this series I certainly hope so. The apparent Raygun-gothic future setting for 2031 certainly looks promising enough. 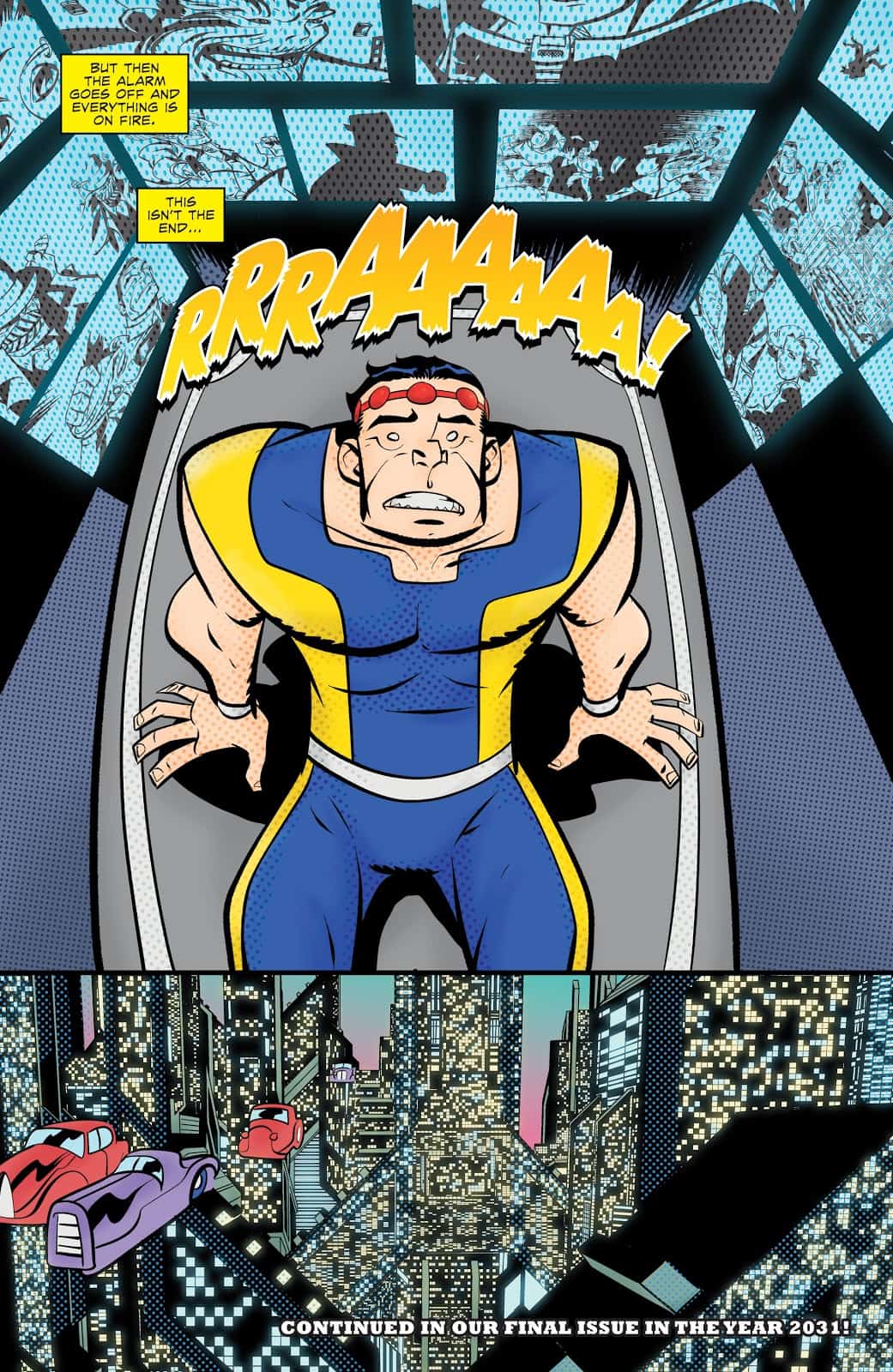 Despite the mini series being called Dick Tracy Forever, from what I read the 21st century has turned Tracy into just another cop. Maybe thats the hazard of any Dick Tracy story, that the line between the character and every Sam Spade/Phil Marlowe character archetype is all too thin. Still, Dick Tracy has endured for all these years for a reason and while it may not be perfect, this series is still a fun, light read and an admirable experiment for learning who Dick Tracy becomes depending on what era he’s in.