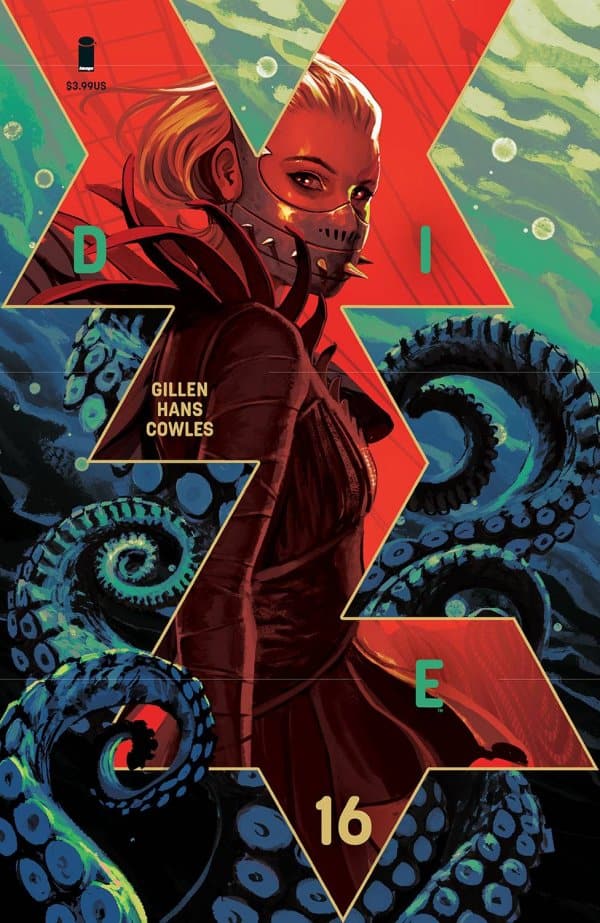 To go into the dark, you have to get to the dark. They never put a dungeon anywhere accessible, do they? Past sins haunt our party, and future sins permeate the landscape. DIE’s closing arc begins as we began: with regrets and screaming.

As DIE starts its fourth and final arc, Kieron Gillen and Stephanie Hans confront their protagonists with a new class of fear: fear of the unknown. In combination with the writhing tentacles on the front cover, it may be unsurprising to find DIE entering the realm of cosmic horror. Wonderfully echoed by the cover’s bright reds and deep blues, we’ve entered a world soaked in blood and seawater. As the narrator puts it, “We are in the area of a map marked with ‘Here be dragons’. In a land where there actually are dragons, that means: ‘Here be something significantly worse than dragons’.” The terrors of DIE #16 are exactly that: visceral, sickening, and significantly worse than dragons. 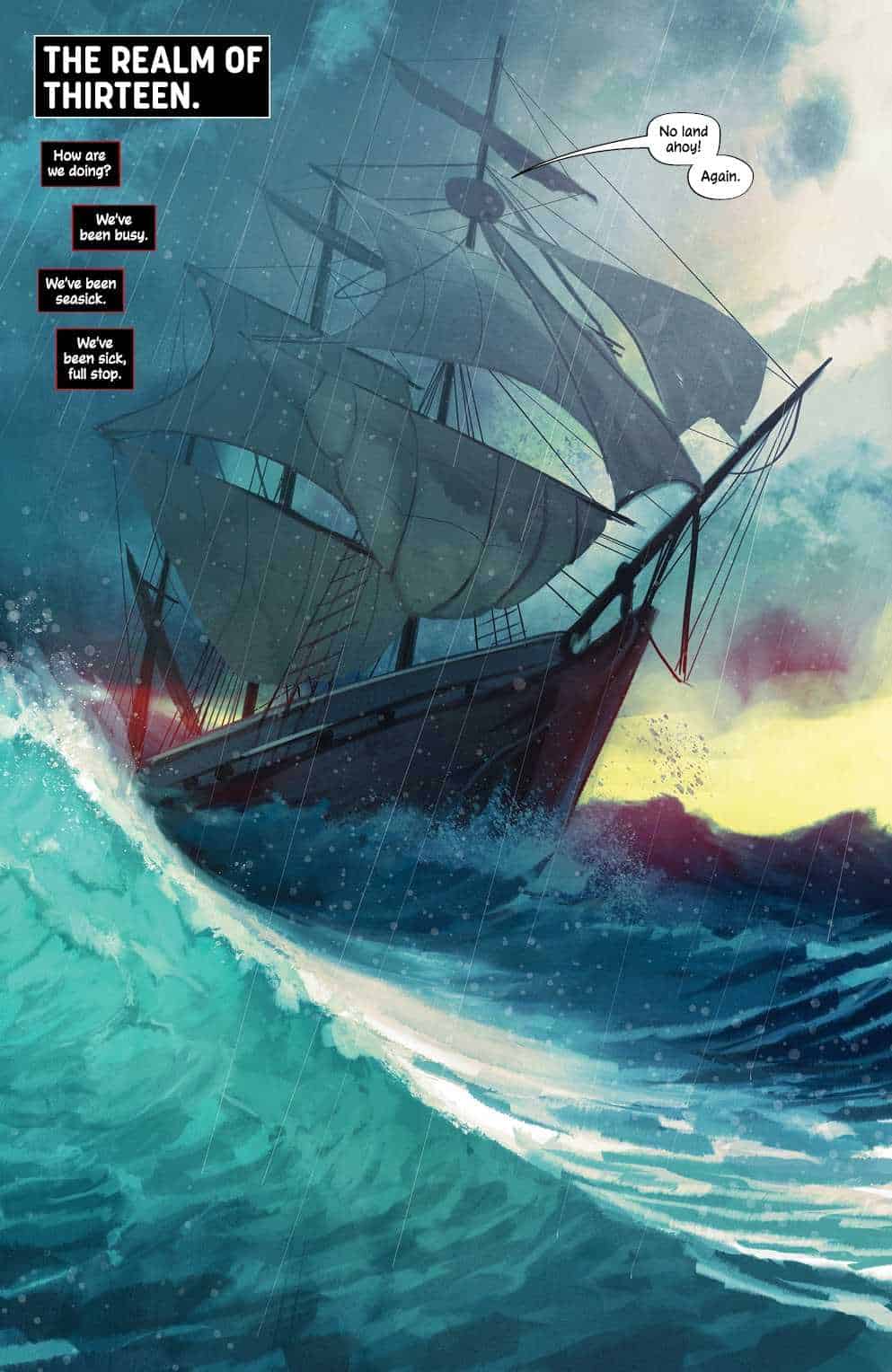 In addition to dragons, DIE #16 is surprisingly devoid of dungeons (unless one defines dungeon very loosely). DIE #15’s cliffhanger ended an arc with the promise of “a f__king dungeon” — as did the writer’s note. As such, the beginning of DIE’s final arc is tinged with disappointment and in some sense takes away from the previous arc’s end. On the upside, this disappointment is mostly quashed by the tantalizing potential for Something Significantly Worse Than Dungeons. 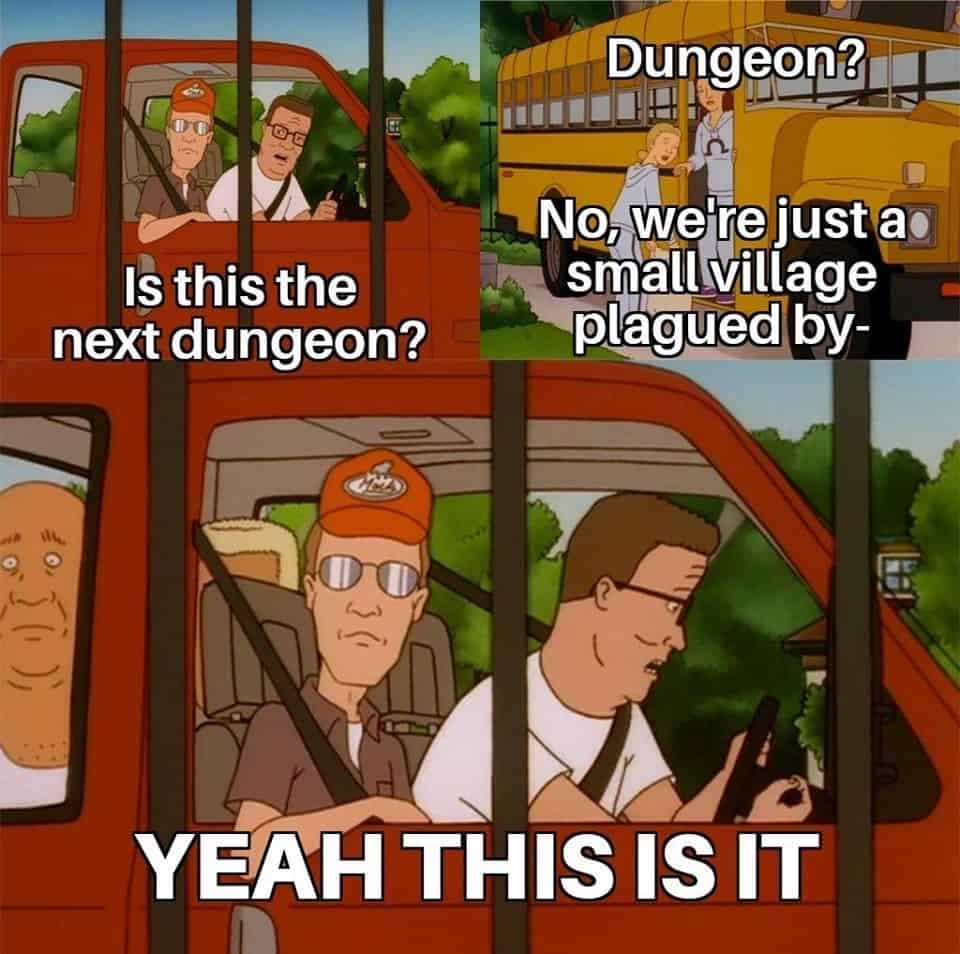 This meme isn’t from the issue, obviously. Fortunately or unfortunately for you, my editors didn’t stop me from including it.

The issue kicks off with a classic RPG setup: the party arrives in a new town, ready for a rest and a tipple, and some of them insist on ignoring everything obviously off-putting for as long as possible. In an RPG, these drinking sessions can act as an opportunity to process recent events and build relationships both in-game and out. In DIE, drinks do this but also allow Gillen to build suspense and create interludes between the issue’s most disturbing moments. That said, there are a multitude of disturbing moments. It’s an issue steeped in Lovecraft/Call of Cthulhu, rife with body horror and dread. The issue spends considerably less time teasing apart the cosmic horror genre’s foundations and preconceptions. However, when Gillen does engage with what “fear of the unknown” means in the context of RPGs, he addresses the Satanic Panic in a way that is both thoroughly disturbing and oddly humorous. 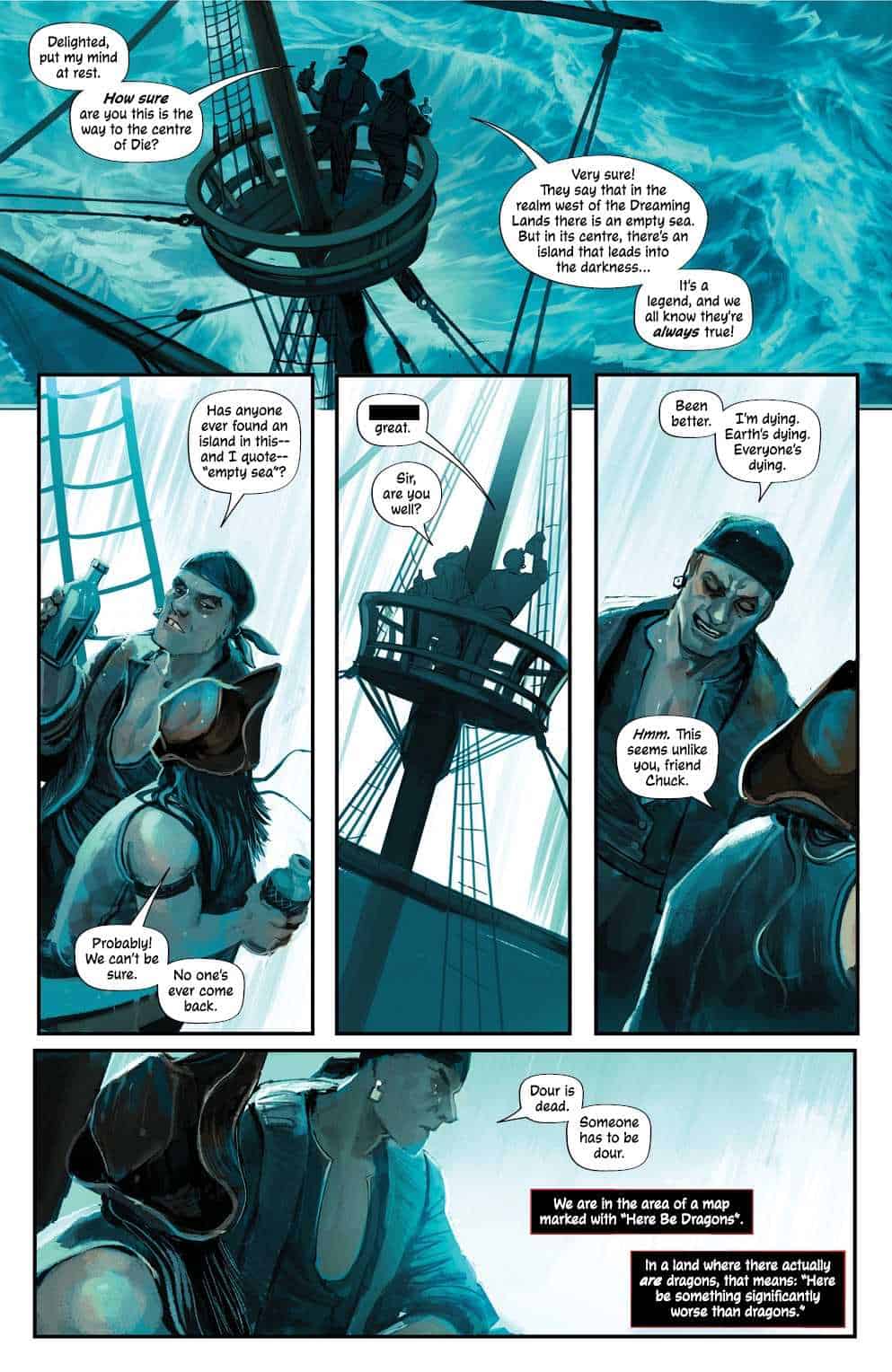 One of the elements that makes DIE #16’s horror so effective are its compositions. Another medium — film — often builds fear through a sense of confinement via close-up shots in tight spaces with something deadly closing in. It’s this intimate shot composition that helps drive fear in both Alien and Jurassic Park. While DIE is a comic, free of dinosaurs or xenomorphs, its storytelling functions similarly. Series of slim horizontal panels with close-ups in small spaces trap readers and characters together, bathed in blood-red light as time speeds up and danger builds. Hans always paints faces expressively and their shock and tears are often just as important to creating fear as the way the worst of the violence always stays slightly out of frame. Cramped pages give the comic leeway to have numerous large panels and splash pages, offering ample room for haunting scenery to take center stage.

As always, Hans’ sense of color and value is phenomenal, and she often opts for restrained color palettes while maintaining depth through value. Some spreads stick to a more realistic palette driven by the soft greys & blues one might expect of a seaside town, or the dull warm light of an abandoned bar. However, Hans proves she isn’t afraid to push boundaries, with the comic’s final pages some of DIE’s most chromatically experimental thus far. The result is a book that stays fresh and high-impact up until its final moments.

DIE #16 is a breathtaking and bloodcurdling plunge into a new genre. As always, DIE is a compelling read and its world remains with you long after you’ve left it.