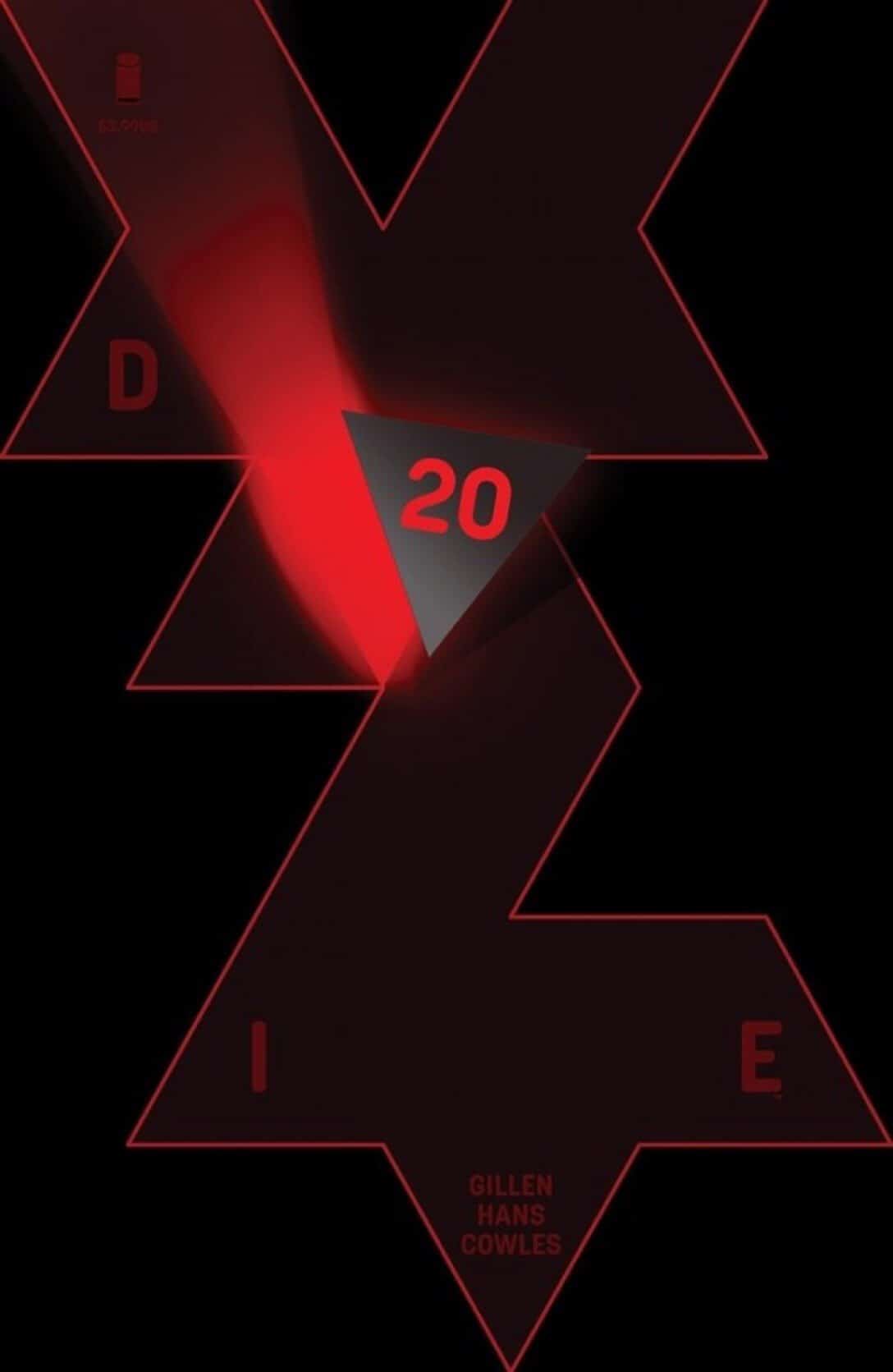 You can never go home, said Sol, way back in issue two. Let’s see if he was right.

As readers and adventurers alike say farewell to the world of DIE, the creative team behind the comic (writer Kieron Gillen, artist Stéphanie Hans, and letterer Clayton Cowles) remain at the top of their game. DIE #20 is a satisfying conclusion on several fronts: the issue ties up the book’s lingering loose ends, the quasi-antagonist’s scheme is explained, and the party return — for the most part — to the lives they left behind. It’s a bittersweet ending: a mélange of tragedy and hope. 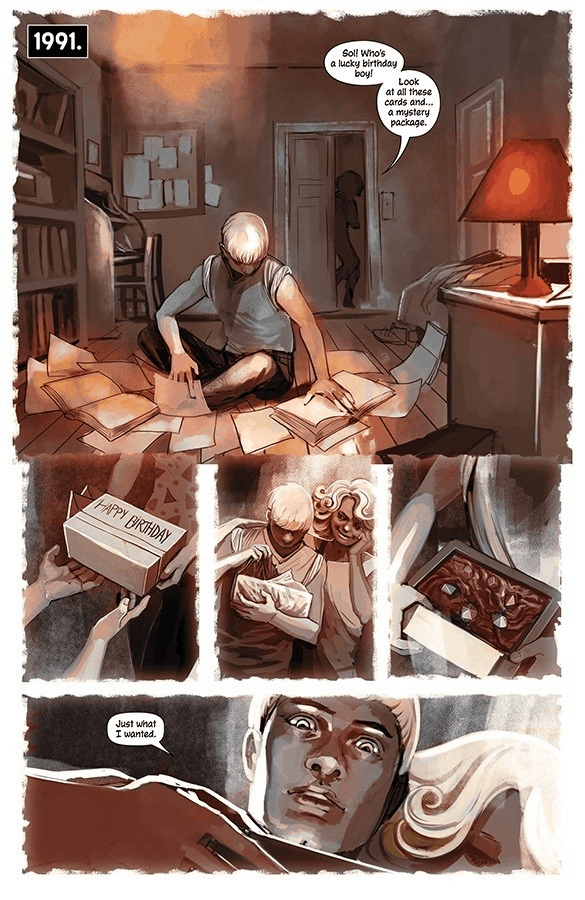 As the party finally confront Die — game, world, and entity — itself, it forces them to answer a single question: “What am I for?” The character design — a knight with a glowing D20 for a head — is playful but imposing; its tone is echoed by its speech bubbles. While Cowles gives many of DIE’s characters more standardized speech bubbles, Die’s speech is in a mechanical font enclosed in black decagonal bubbles reminiscent of dice in silhouette. The bright, empty surroundings it shares with the party are almost clinical and its exposition is indifferent. Die the entity is simply the mechanics of the game laid bare.

Die’s question — what are RPGs for? — has always been at the center of DIE the book, too. When confronted by the question, the protagonists struggle and ultimately find their way to a complex answer. Hans paints every pained expression of their conversation with an expert hand. Meanwhile Gillen, via the party’s answer, elegantly restates and answers the book’s thesis. 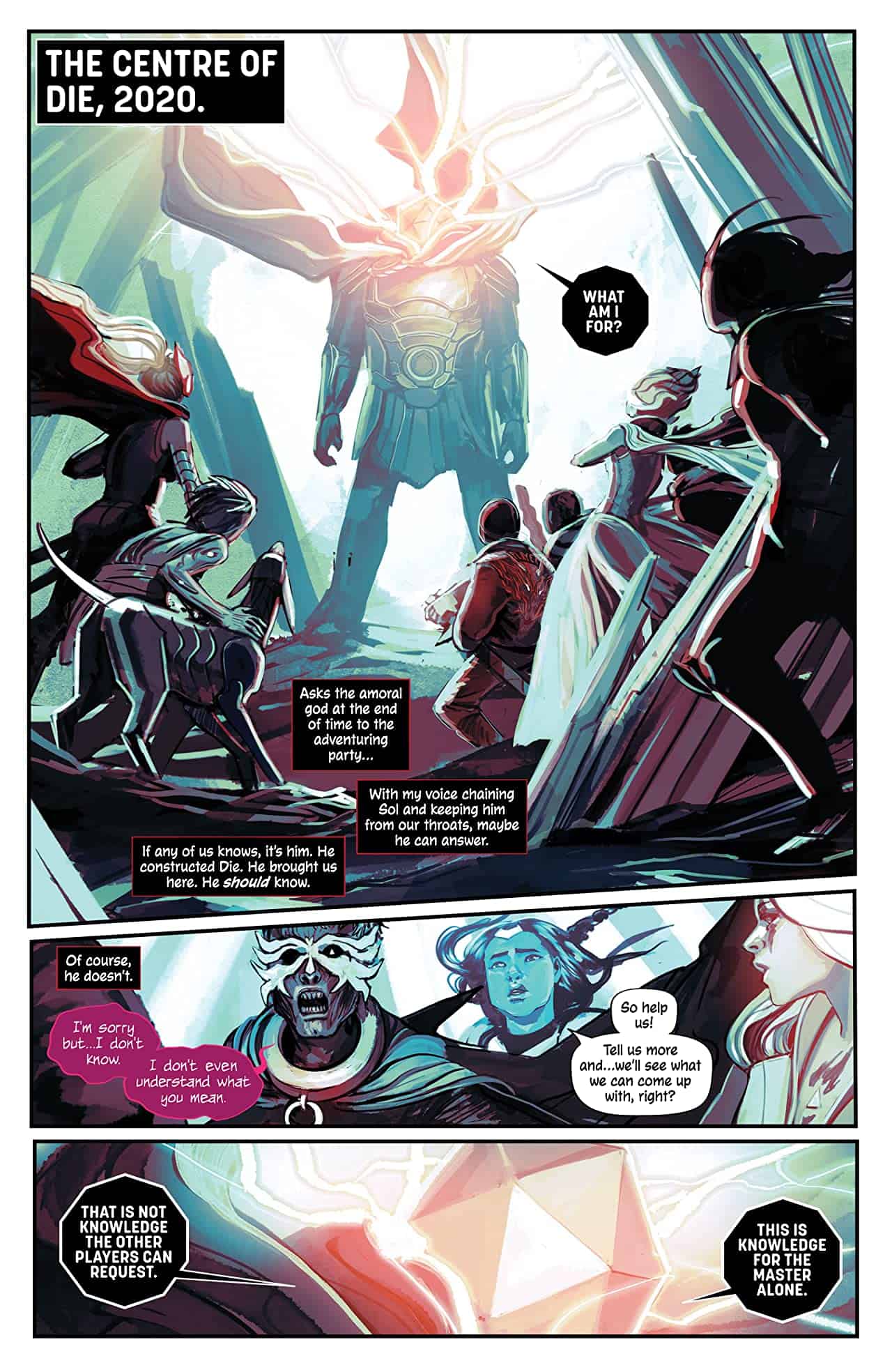 One of the answer’s many facets is that RPGs are a place for introspection. They’re also a place for escapism. As with RPGs, DIE as a story feels deeply introspective at times. It also acts as an escape for its readers. In DIE, we can experience someone else’s struggles, commune with dead authors, and see dragons. Much of DIE has been preoccupied with its protagonists’ struggle to return to the real world, but the potential for fantasy to combine with reality has simultaneously existed as a threat. The final issue of DIE hits hardest when it forces not just characters but readers to confront a shared morbid reality: the COVID-19 pandemic. However, the characters also return to a future filled with hope and new opportunities — things they would have missed if they’d stayed submerged in fantasy forever. 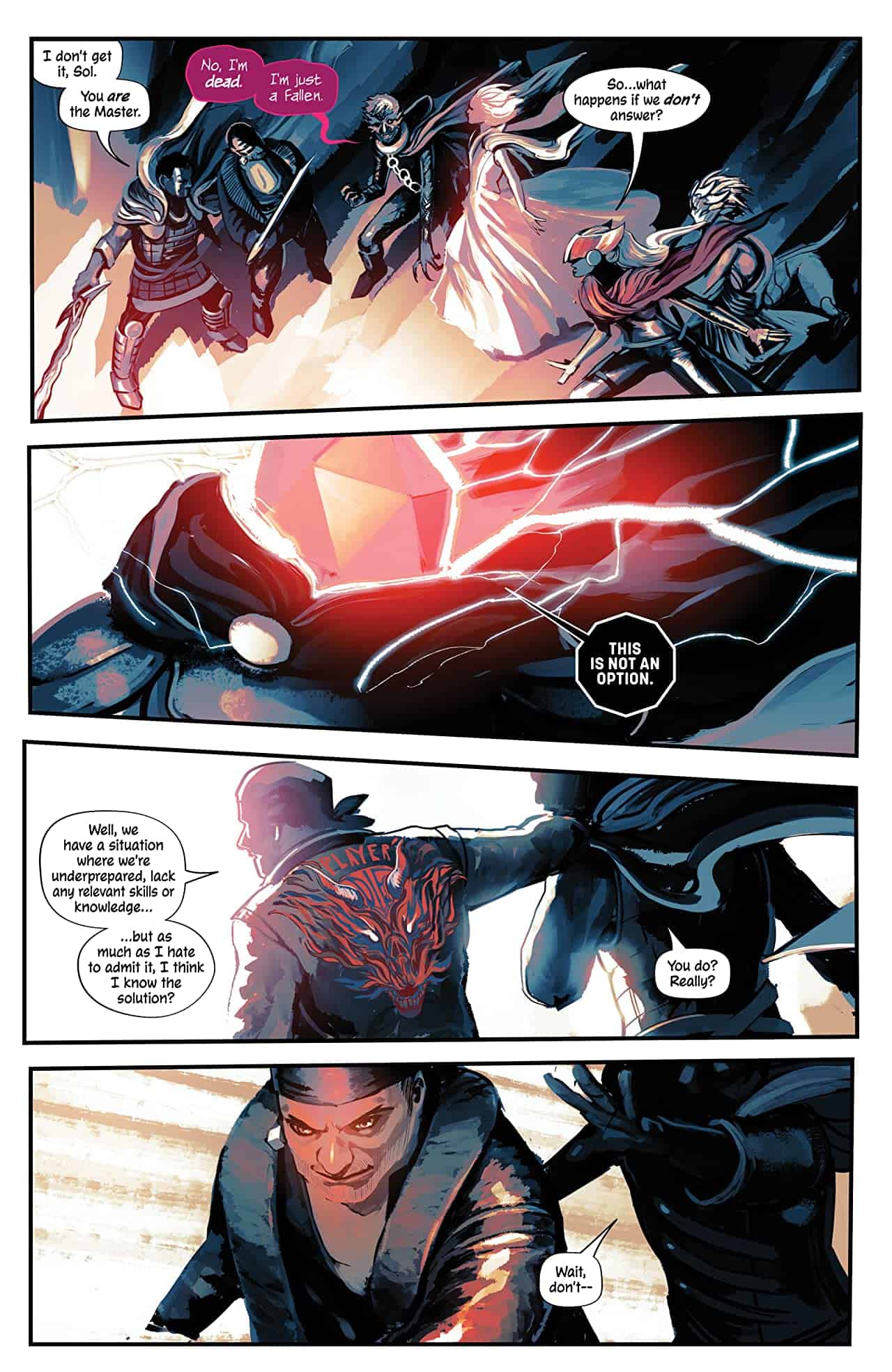 Like multiple works of Gillen’s, DIE ends with a specific fourth-wall break: on the last page, a character makes eye contact with the reader and imparts some final words. Then, like DIE’s characters, we are left by the world’s creators to go about our lives. However, we’re also left — invited — to find our own answers to DIE’s questions and to cling to hope. With this week’s announcement of a DIE RPG Kickstarter coming this November, perhaps some readers may end up searching for some of their answers there.

As with all things, DIE has come to its end. DIE #20 is a satisfying conclusion and bittersweet farewell to a masterful piece of storytelling.