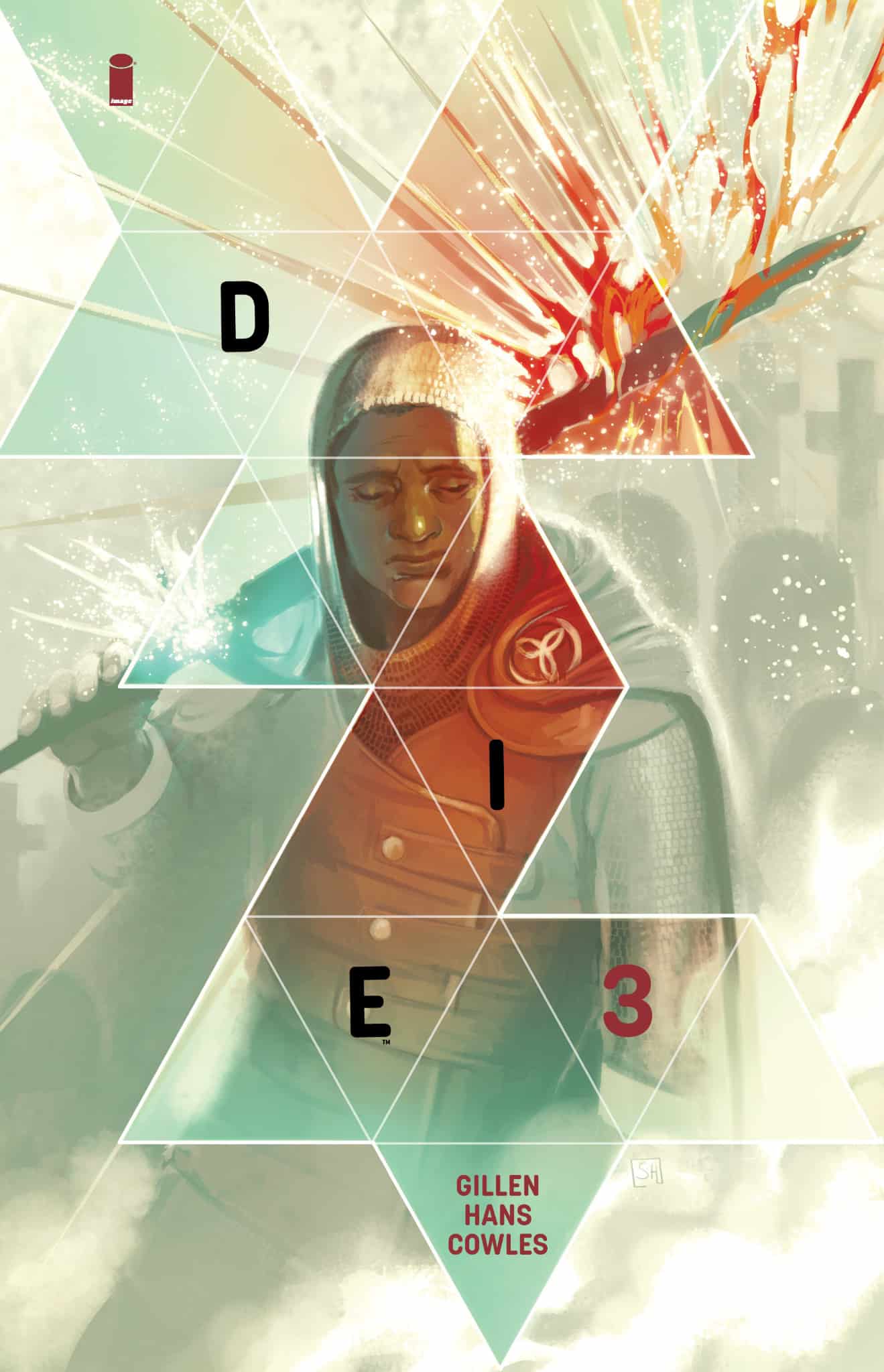 The crew encounters a dragon in a No Man’s Land.  Ash meets someone who is not a big deal and someone who is a very big deal.  There is a moment of catharsis as the party heads to their next destination.

Kieron Gillen and Stephanie Hans continue on their path of de-construction in Die # 3, taking us into slight, digression that further illuminates the nature of the fictional world our characters are journeying through.  The way in which Gillen chooses to depict a new layer of the structure underpinning this ‘fantasy’ world in this issue provides some very hefty emotional payoffs that is both extremely affecting and just…weird, but nonetheless satisfying.

I really enjoyed the way issue 3 starts out.  With all of the characters’ abilities and limitations established, now we just get to see them ‘play’.  Angela’s dependence on her faires is deployed as nice plot driver; providing much of the engine that puts our characters where they need to be in this installment.  It also underscores just how serious and potentially deadly her fantasy persona’s addiction to the element that powers her abilities can be. Chuck’s ‘luck’ ability gets to be on full display as well while Isabelle continues to snark at the deities who grant her life-saving favors.  One gets the feeling that these gods’ patience may have limits and that they’ll come to collect soon in a way that will be extremely unpleasant. 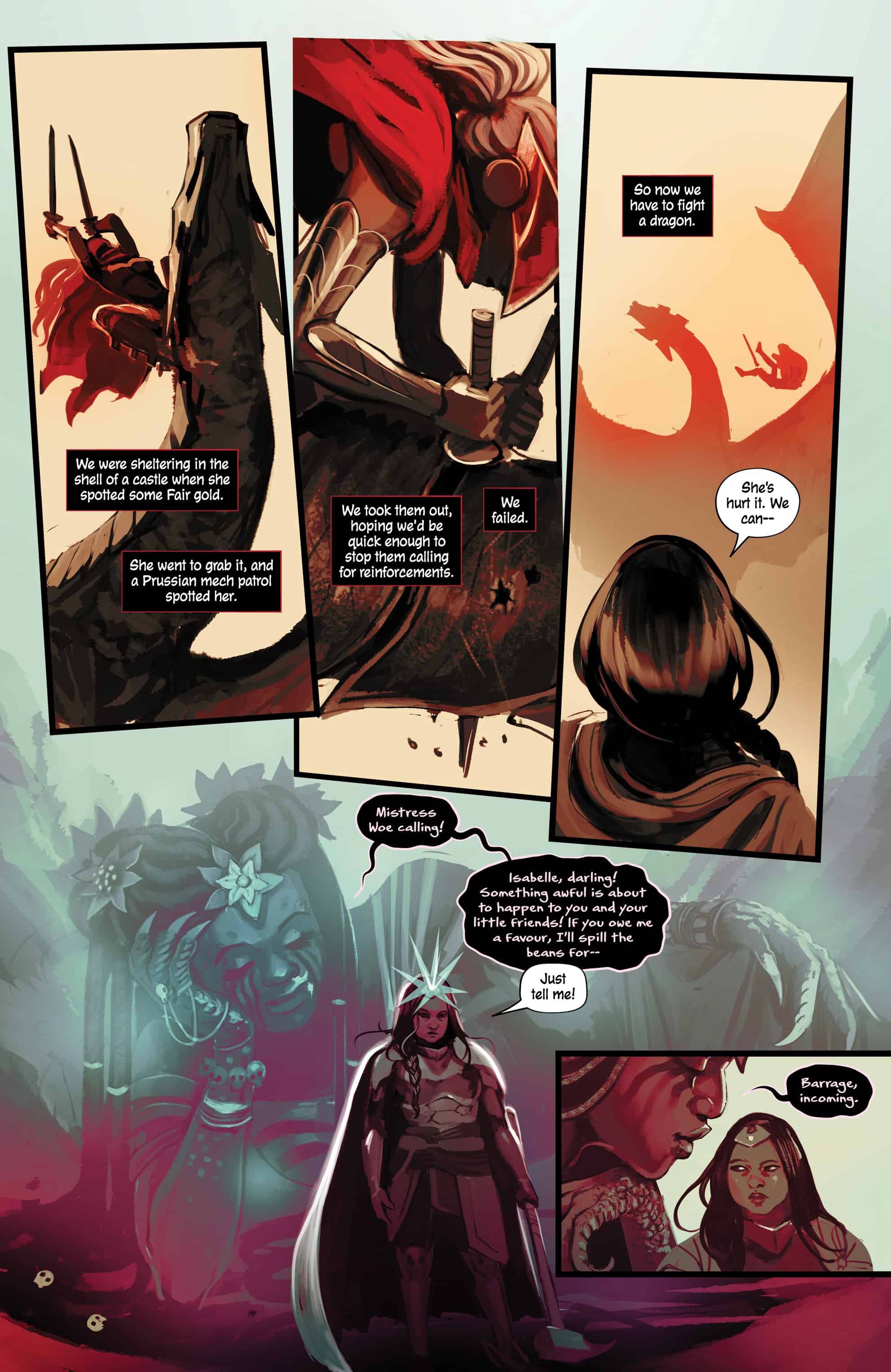 When the notion of an Eternal Prussia was introduced in issue 2, I had visions of a steampunk realm dancing around in my head.  It certainly could still be that, but Gillen leans us into a direction that is far less fanciful and far more harrowing and realistic.  There is a steampunk-esque dragon wreaking havoc that our team has to contend with, but the backdrop of this battle isn’t so much a fantasy realm filled with anachronistic tech but rather trench warfare pulled straight out of World War 1, populated with not-named-as-such-but-are-nonetheless hobbits, performing the ‘role’ of British soldiers caught in an endless, never ending engagement with the enemy.  Ash has an encounter with one such soldier, in a scene that surprisingly, sneakily ends in a very emotional, affecting way. 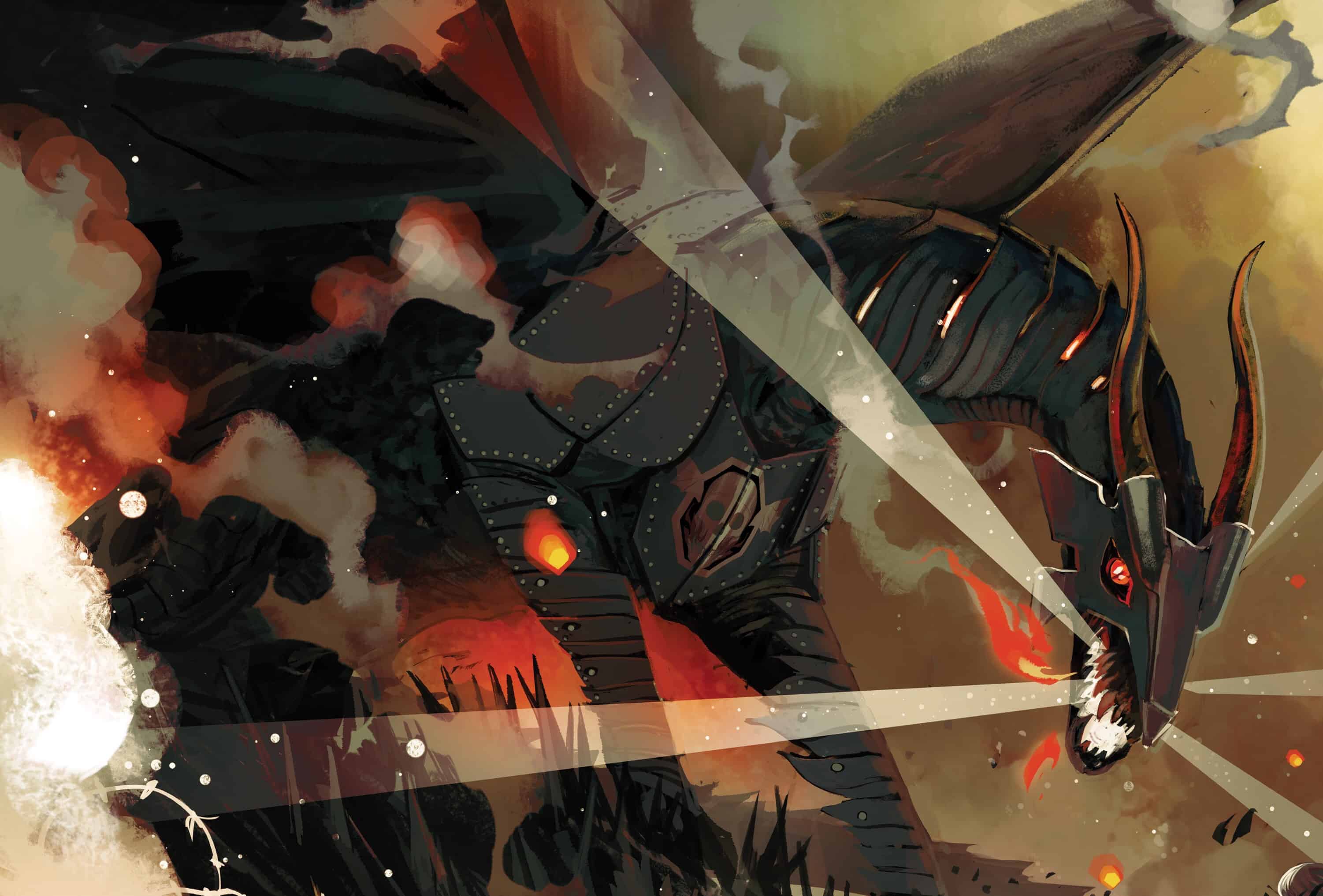 The way in which Gillen manages to illicit such sympathy and tenderness not just from Ash, but from me as well, for the plight of characters who are essentially NPCs in a video game is a testament to the strong writing of this series.  Through the simple act of dictating his final thoughts to Ash we learn so much about the cyclical nature of these beings’ lives; the unremitting and inescapable tragedy they endure and the sheer hopelessness of their ‘lives’. Admittedly, there was still a little bit of resistance and skepticism on my part.  Is this a trick? Why are we being asked to invest so much emotional affect for the fate of characters who are, and I realize how weird this sounds, not even ‘real’?

The answer comes a few panels later when we, along with Ash, encounter the master of this particular realm: a not-named-but-is-obviously Tolkien who orchestrates and manages the endless murder machine No Man’s land of Eternal Prussia/Little England.  Ash’s encounter with this literary figure continues the deconstructive motif that Gillen is playing with in the series, further elucidating the larger purpose and meaning behind the series and Gillen’s intent in writing it. Why do these fantastical stories that are so far removed from our ‘real’ world matter? Why does the tragic end of an unnamed non-entity character have so much weight and heft?  Maybe, it’s because beneath all the flash and fantastical elements that adorn it, stories like this in general and Tolkien’s in particular, have an undercurrent of real tragedy and pain that is yearning to be recognized and heard. As much as our characters are being put through the wringer by being stripped of the fantastical delusions that obscure the implications their characters’ actions and powers, now we see the quite real aspects underpinning fantasy in general.  GIven both how sinister our characters’ re-entry into this world was and Isabel’s exhortation last issue that the only ethical way to proceed in this world is to treat it as if it were real, feeling anything less than profound sadness for the fate of this ‘Frodo’ just seems nonsensical and inhumane. Structurally, the introduction of Tolkien here and the role that he plays in this realm also dangles more intriguing possibilities; what other realm masters might we encounter down the line and how might such encounters similarly deconstruct other fantasy RPG tropes and founding texts? 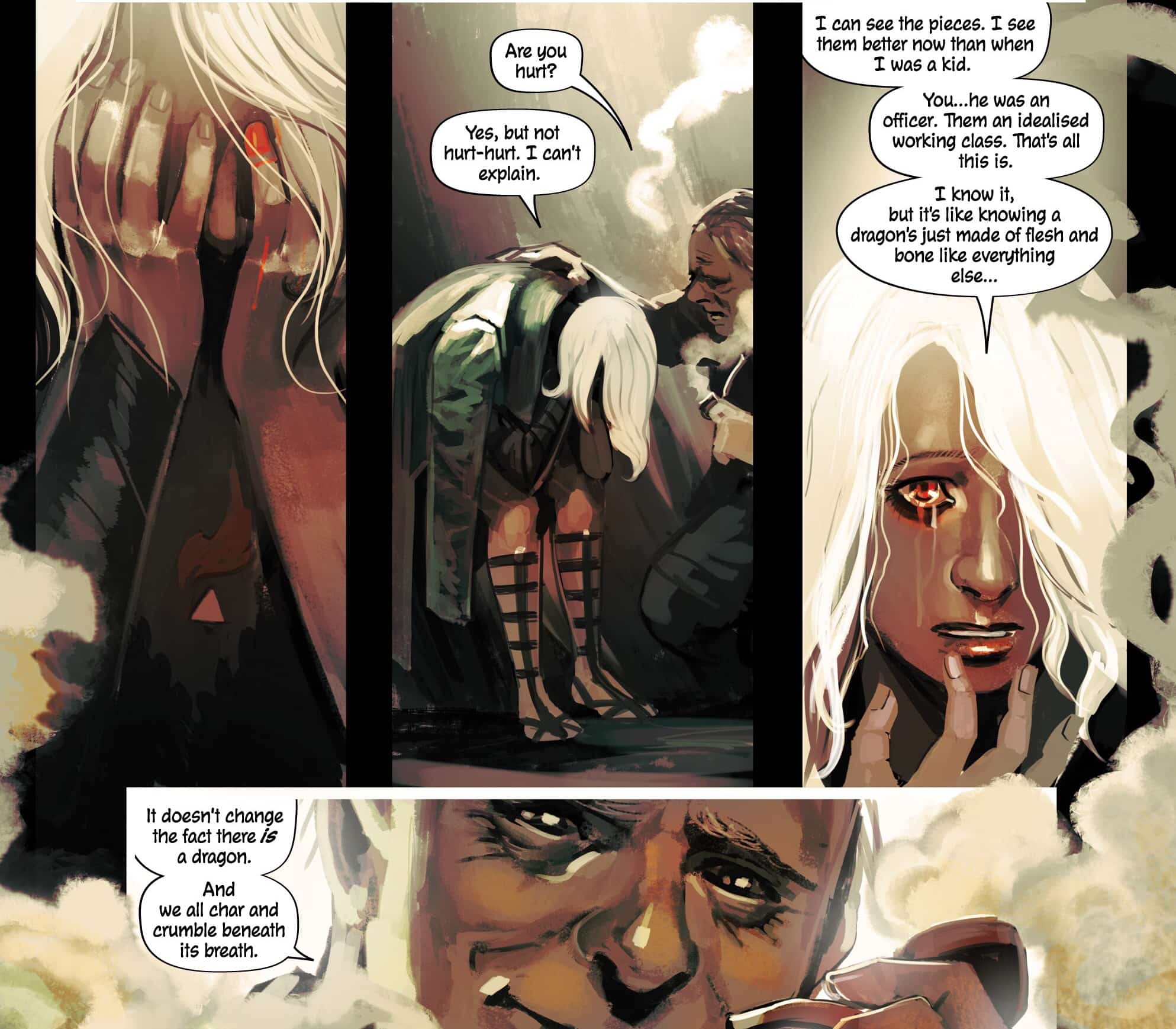 Hans’ art remains on point as ever.  I particularly enjoyed the less gritty, more illustrative quality of the ‘Hobbiton’ flashback scenes, which is a nice contrast to the very gritty, smoky and hazy environs of our characters’ present trench warfare environment.  Her strong sense of design remains evident with our Prussian Dragon and her depiction of the trench soldiers; a presentation that simultaneously, effectively evokes both the grit and gray of a World War 1 trench soldier and the vulnerability and whimsy of the denizens of Tolkien’s world.  Melded together, they effectively evoke just the right kind of feel and look for this series. 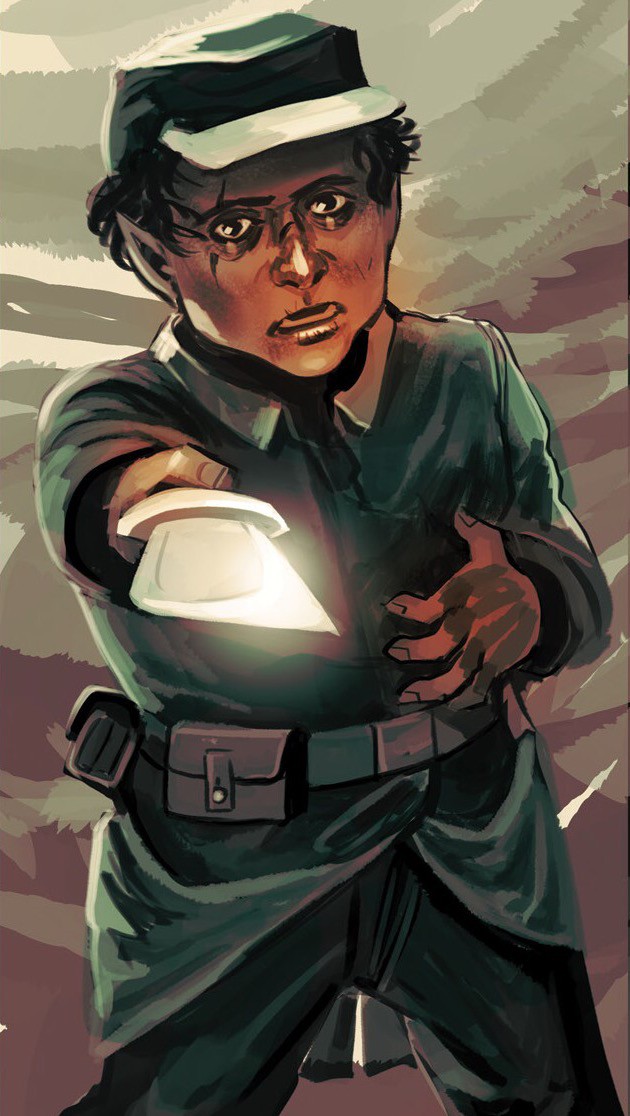 Die # 3 once again showcases why this series is quickly becoming the must-read-pull title of 2019.  It has character, genre, emotional and fantastical payoffs to spare, powered by Gillen’s careful and well-thought writing and Hans’ delicate and beautifully rendered art.  Gillen and Hans have created a darkly beautiful world that seemingly reveals endless horror and beauty.