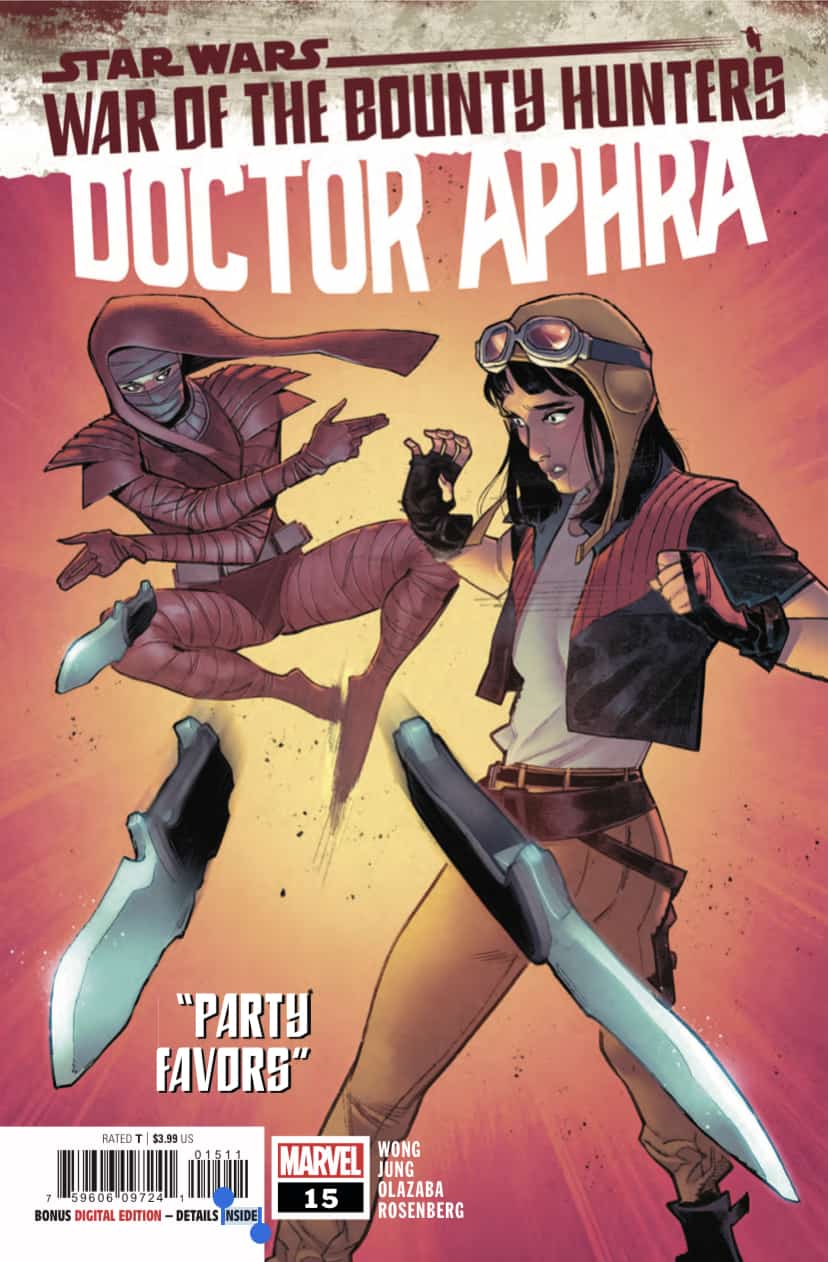 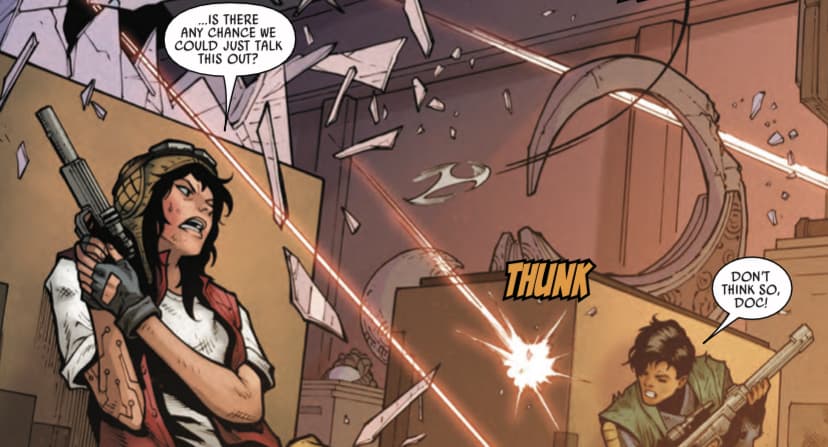 Doctor Aphra has broken out of the jail aboard The Vermillion. As is typical of Aphra, she goes from frying pan to fryer when she must confront Deathstick, one of Crimson Dawn’s most deadly associates. She must form a rocky alliance with Just Lucky to escape the assassin.

War of the Bounty Hunters” focuses on a lot of previously established characters, but still manages to add a few extra new faces into the mix. The most prominent of these characters is the Dathomirian Nightsister-trained Deathstick. She is basically a ninja trained by the people who helped form Darth Maul and Asajj Ventress. Deathstick really gets a chance to shine in this issue. She is all high jumps and shurikens, deadly poisoned knives and a concealed identity. Needless to say that Aphra and her crew are not exactly equipped to deal with her. In fact, the group has a handful of near fatal misses as Deathstick toys with them. Eventually Aphra discovers an artifact to help level the playing field, which is her specialty. All in all this chapter only goes on to further the mystique and over all coolness of this character. She is left in a dire state by the end of this issue, but it seems certain that she will show up again sooner than later. 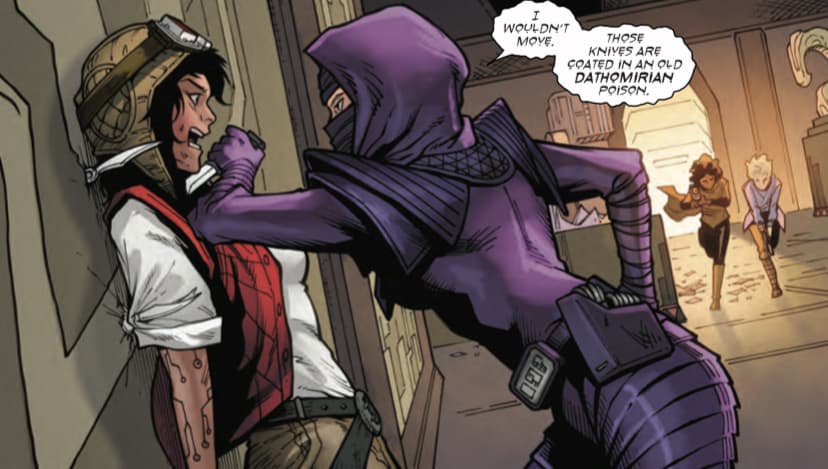 A common element to pretty much every Aphra story is her habit of forming frenemies. Even her current partner Sana Starros is not only a formerly betrayed enemy of Doctor Aphra’s but also one of her exes. This issue brings Aphra face to  face with a partner that betrayed her instead, Just Lucky. Both sets of characters have had stories in this series run parallel to each other, but only recently where they reunited. The entire issue focus on the fact that both these people hate each other, but are forced to help each other out temporarily too. This is really the only kind or relationship Aphra knows. There is fun bit of back and forth between Lucky’s partner Ariole and Sana as they display almost respect for each other despite being on opposing team. However, in the end Aphra plays a quick trick to get away from Lucky and Ariole and is free to continue her mission to bring Black Sun secrets back to Domina Tagge. 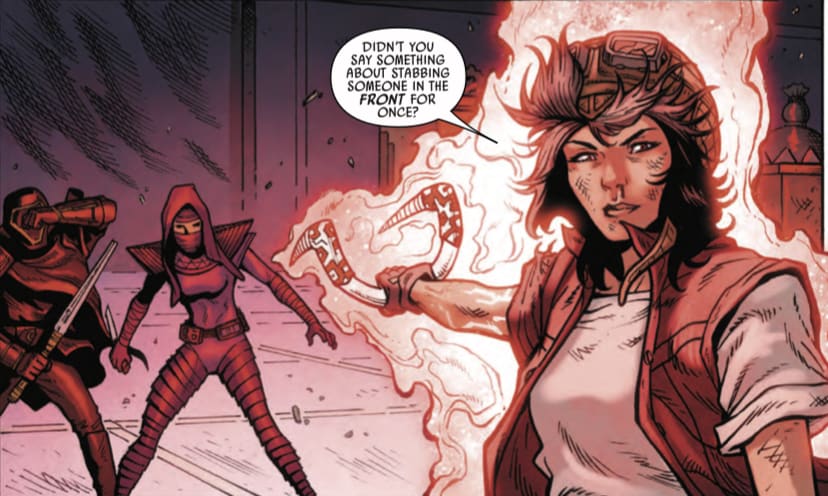 This issue could not have been more typical “Doctor Aphra.” It has all the key elements. There are a healthy amount of people in it that either want Aphra dead or at the very least harbor great loathing towards her. There are convenient ancient powerful artifacts to help her along her way. There is a huge amount of sarcastic dialogue, lots of action, and plenty of narrow escapes. The past year or two of “Doctor Aphra” comics involved putting her in really tough situations, or explored painful background history of her which brought down the fun element the character is known for. It’s nice to get back to some good old fashion tongue-in-cheek barbs quipped while fighting, followed by mysterious and dark power from an ancient artifact. “War of the Bounty Hunters” offered a great opportunity to focus on those classic elements, but Aphra’s place in that overall larger story is now complete. Aphra and Sana must return to their original mission. 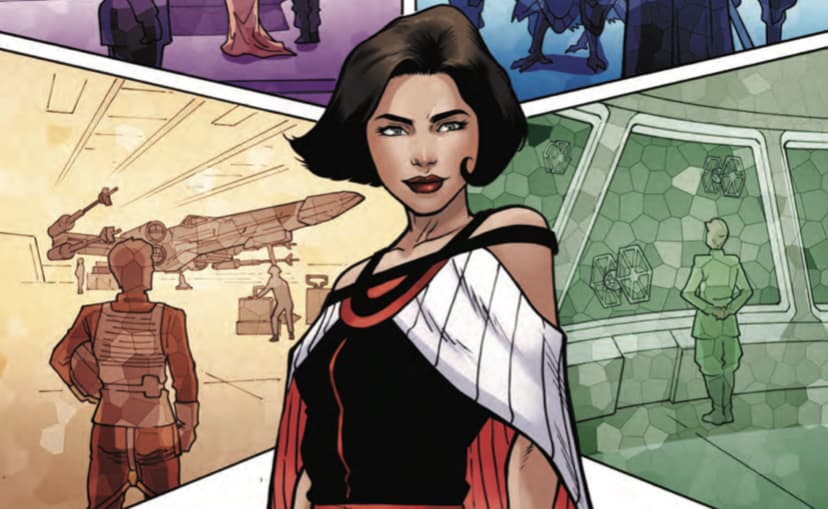 Aphra and Sana are headed back to Domina Tagge with their task completed. Unfortunately their exit from Crimson Dawn certainly left an impression. How long until Qi’ra and her agents catch up to them?