Doctor Aphra #17: You Can’t Keep a Good Enemy Down. 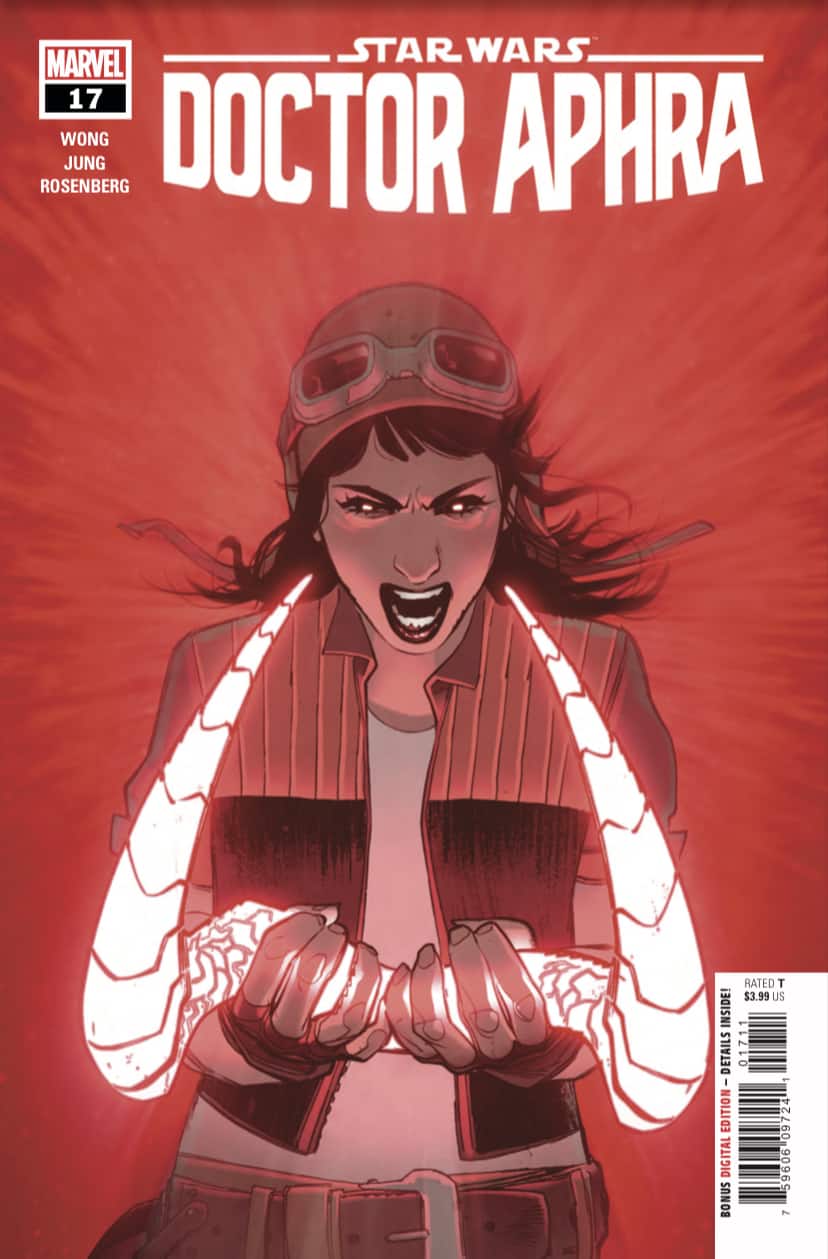 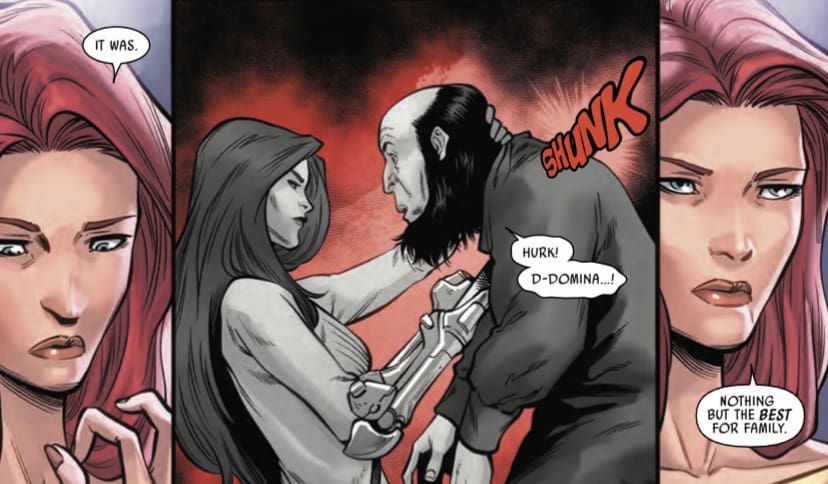 After escaping Crimson Dawn and returning to their boss, Domina Tagge, Aphra and Sana find themselves on a new mission. Much to Aphra’s delight this task involves a bit of archeology, Aphra’s main area of expertise. However where they are dangerous relics to be had, Aphra’s former colleagues turned enemies must also be nearby.

This particular Aphra series has been a bit rocky since it began. Uninspiring side characters have flooded the series, and the detour the series took for “War of the Bounty Hunters” did little to rekindle the previous Aphra series’ past charm either. That is not to say it isn’t still interesting and fun. Yet compared to the days Aphra was double dealing Vader, getting trapped in an imperial prison, or forming a death squad of dangerous known criminals, the series has not just been able to keep up with the previous one. Sana is a great character, but the more she continues to work with Aphra, the less bitter dislike she has for the rogue archeologist. It makes sense to continue the narrative of an ongoing series, but that bite is just gone. The continuous bickering between the duo is greatly missed in favor of a more proper partnership, which is actually slightly boring. If there is a saving grace in this story arc, it that Just Lucky seems to be absent from it. 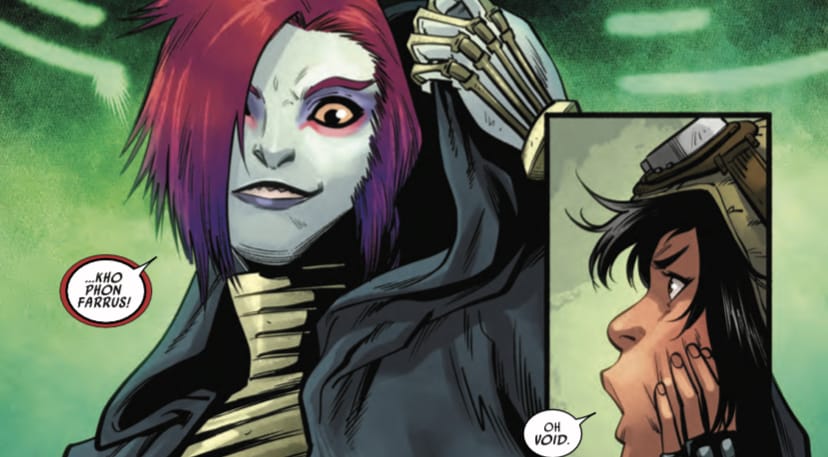 Where Aphra and her various associates seemed to be losing a lot of their individual charm, the villains in this series have been taking the spotlight. The Tagge family has in one form or another dominated the series as the main advisory. A few colorful other charterers have shown up to be as thorn in Aphra’s side as well. Aphra used to be the sneakiest and most selfish character in her own stories, but now she faces villains that live up to the bad guy game in a more traditional sense. This issue begins with the return of an old enemy from previous issues. It also introduces a new villain, a Force worshiping fellow archeologist with a grudge against Aphra named Kho Phon Farrus. This history between them is unknown but like with most of Aphra’s ex-colleagues, Farrus wishes only pain on suffering against the Doctor for whatever past they had together. It’s actually a bit disappointing not knowing that backstory because frequently the stories of Aphra betraying people closest to her is usually the best parts of any Aphra story. Hopefully future issues will cover that in flashbacks and fill in the betrayal. 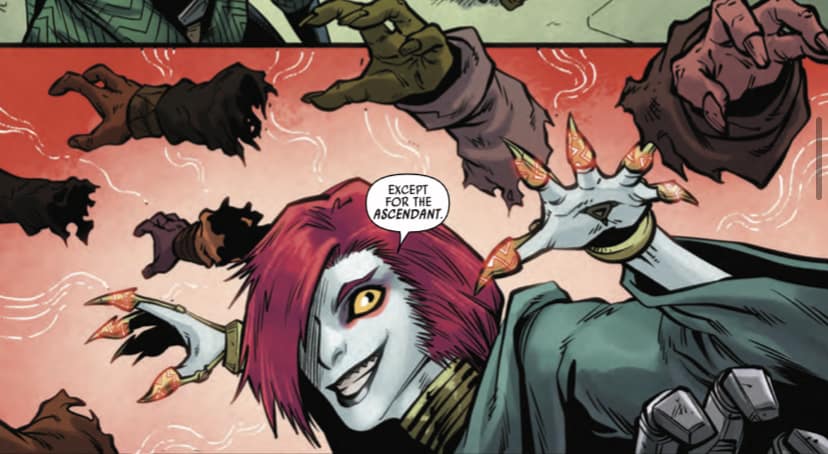 The colors in this chapter are impressive. Many Star Wars series, like “Darth Vader” plays with color very well, favoring red above all else. This issue plays with a lot of red and green backgrounds, the red only showing up when some sort of power is being used. The green is background. Red versus green is a classic Star Wars color scheme for fights, so this actually fits in very well. The art is pretty good in this chapter as well. Sometimes in past issues, Aphra looks like an entirely different person, but not only is she characterized well in this issue, so is everyone else. Artist Minkyu Jung is usually pretty good about this, but somehow this issue’s art seems to pop more. Bothe the art and color usage in this issue paints a very distinct picture of Farrus as brutal, cunning, and vibrant. The writing finishes the job, by making them look completely unhinged in the script. This issue does do a good job furthering the overall story, but even better than that it bridges the “War of the Bounty Hunters” series and the “Crimson Reign” series together very well. By the end of this chapter is becomes very clear that Farrus, the Tagge family, and Crimson Dawn are no where near done with Aphra. This chapter acts as sort of a set up for things to come and gives readers a taste of what’s in store. 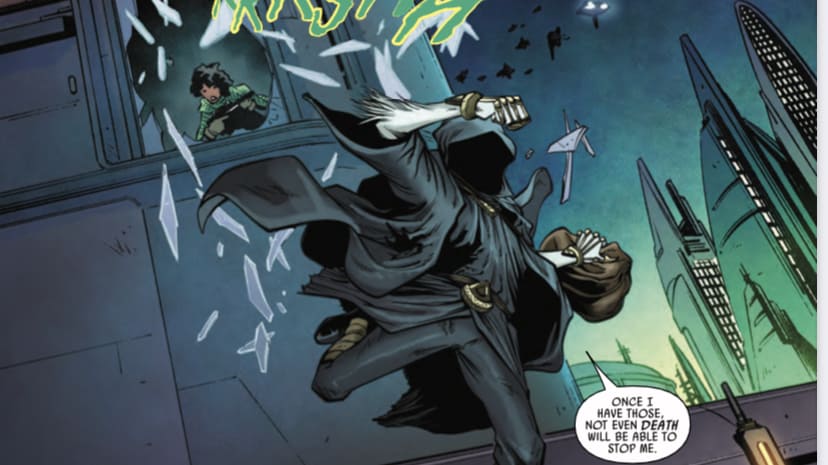 Aphra now has two enemies gunning for her, both representing large amounts of power. Aphra, in true form, awaits another conflict wit Farrus with a sly grin. Maybe the old Aphra is still in there after all.

Doctor Aphra #17: You Can’t Keep a Good Enemy Down.