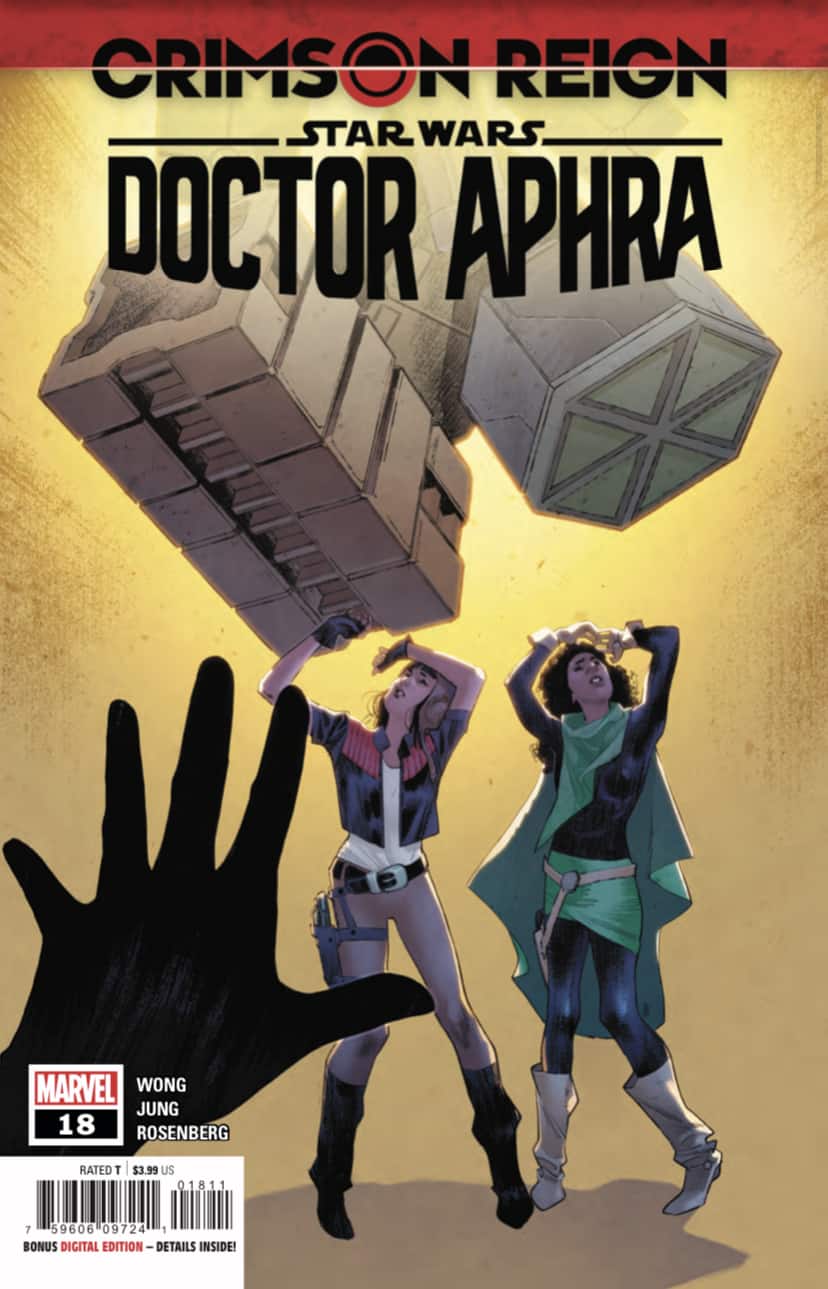 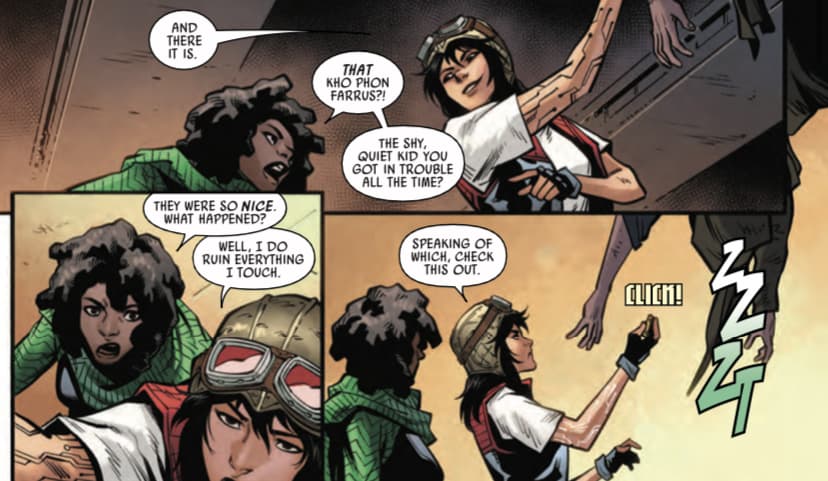 Aphra and Sana have been at odds with the entire galaxy it seems, but now they are in a race to get to Ascendant tech before wannabe Sith Kho Phon Farrus can do any more damage. It seems like they might need a little help, but where can they find assistance among so many enemies? Aphra always has a trick up her sleeve.

This series has had its ups and down. On one hand, it is nice to get to see Aphra actually using her archeologist skills for once, scouring planets for arcane technology. On the other hand, she has mostly been a pawn of others, hired by one baddie or another which takes away her self-serving nature. This issue returns a little to what originally made the character great, and that is the fun of watching her escape and trick her enemies almost to her pleasure. What makes this so satisfying is that many of the enemies she encounters are actually of her own creation. She created Triple Zero and Bee Tee One, the murder Droids. She even made her current begrudging partner, Sana Starros, a fierce enemy by betraying her after the two fell in love. This arc focuses on Kho Phon Farrus, a former classmate at Bar’Leth University of both Aphra and Sana. Aphra made a fool of Faruss and blamed them for things Aphra did. In doing so, she shaped the Sith obsessed student into a villain bent on obtaining artifacts to give them power to make them on par with a Sith Lord. Faruss is now searching for more Ascendant tech only to destroy their friend turned enemy, one Doctor Chelli Loni Aphra. 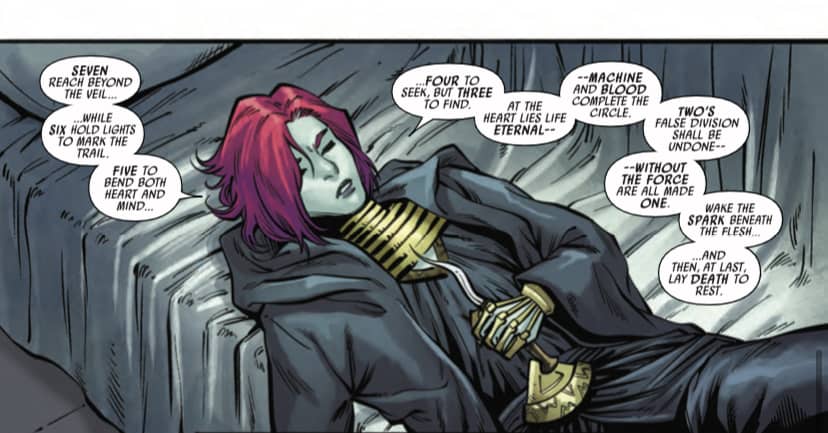 One of the things that made the character of Doctor Aphra and her series important is that it is hands down the most diverse and progressive series Star Wars has to offer. It has featured many gay characters, such as Aphra herself as well as a variety of multiracial humans. This issue really hits that nail on the head in a few ways. First of all, Kho Phon Farrus is presented as a non-binary character, only referred to as “they” or “them.” Having an alien who is not exactly male nor female isn’t completely new as far as Star Wars stories goes, but it feels more than at home in this series. To a great surprise in this issue, it is revealed that Just Lucky and his male professional partner Ariole Yu, have feeling for each other, which makes the almost bland character of Just Lucky much more interesting and multidimensional. This is in the same spirt of the entire Doctor Aphra saga. It is not revealed until much later after the character of Aphra was introduced that she was gay at all. It came about organically . The same with Sana Starros. She was introduced as a former wife of Han Solo, but it was soon revealed that it was only for a job they pulled together. It was only much later that the past relationship with Aphra was brought to light. 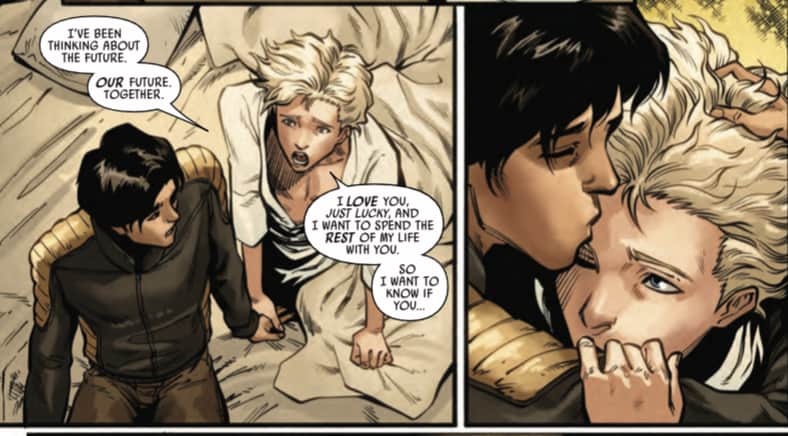 This issue ups the game in many ways. The art is much more expressive than in previous issues. Aphra’s classic smirk adorns many pages as does Sana’s surprise. Just Lucky and Ariole have tender moments where their faces tell half their story already. The coloring is amazing. Turning each page is like traveling through a rainbow as the story changes and so does tre pallet to match. No color is particularly dominant, which is unlike many Star Wars issues that tend to focus on a color theme all the way through. The writing takes on a life of its own to not only further the plot, but to redefine and sharpen focus not only on events and characters, but events to come. The only thing about this issue that is less than stellar is the cover, which seems almost too simplistic. This is a problem this series has had for a while. Previous Aphra series have had very detailed covers which would feature Aphra in some cocky pose to help sell the character. This series chooses to depict in the moment sequences, which is superfluous because readers will get to that point while going through the issue already. However, now that the story is getting richer, maybe the covers will too. 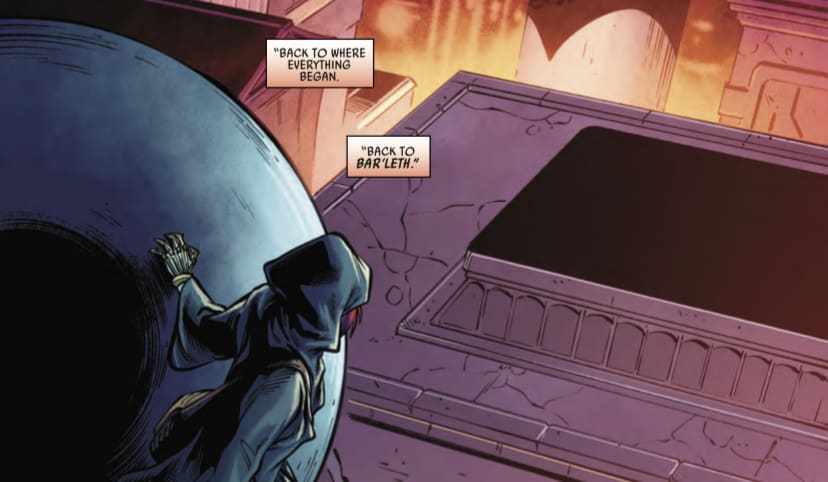 Now that Kho Phon Farrus’s identity is know, it is time to return to the very university where they, Sana, and Aphra first met. A showdown on familiar grounds is immanent, but first readers might get a glimpse into the past that originally brought the trio together.