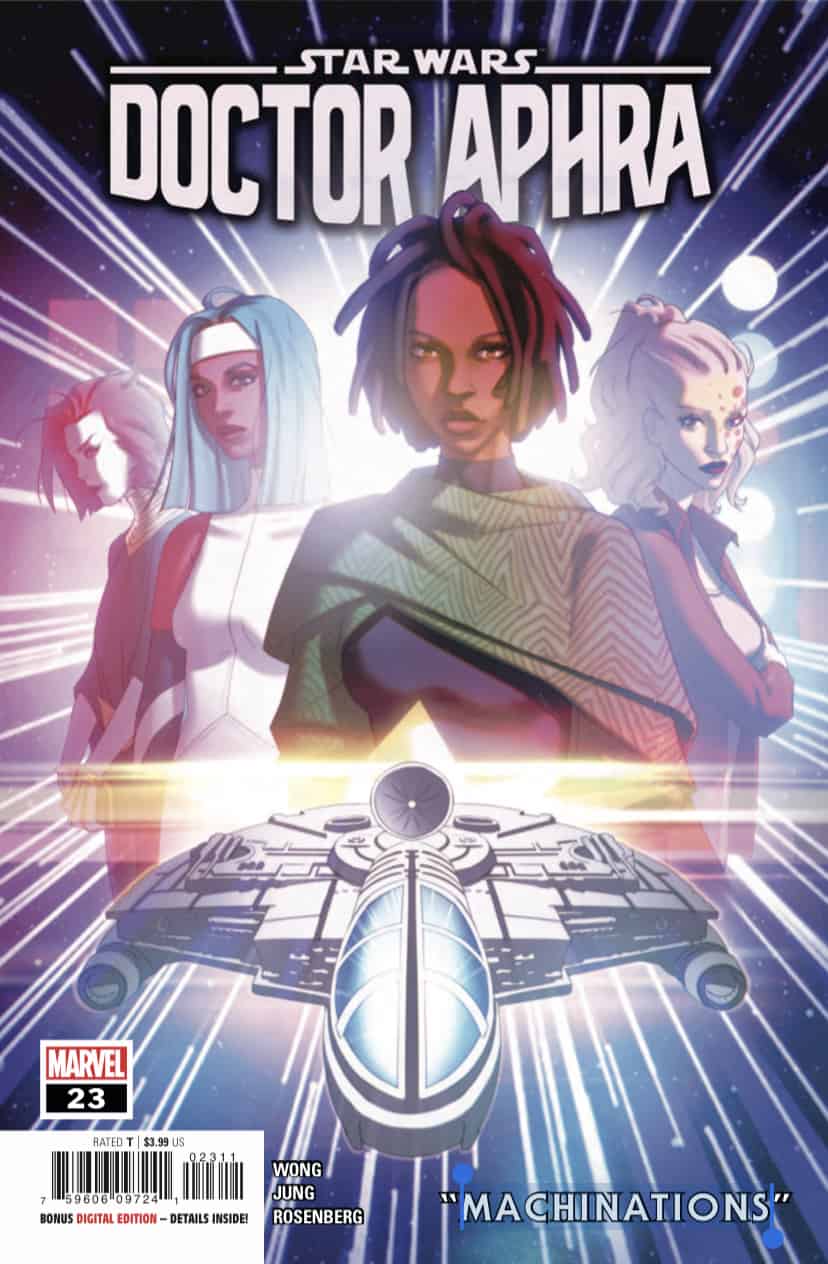 In her obsession with hunting rare and powerful artifacts, Doctor Aphra has found herself possessed by the spirit of The Spark Eternal. Sana Starros races to her aid with a team of some of the only people who have any shred of affection for her. Meanwhile The Spark has stolen Aphra’s body and aspires to put a plan of its own into motion.

The entire length of both of Doctor Aphra’s series runs a path of betrayal, disappointment, and heartbreak for the small handful of people she calls friends and family. Each one of them hates and resents her. Each one seeks some kind of universal justice against she who most hurt them. Sana Starros is the last person anyone every expected to partner with Aphra, but she has been present for most of this series. Somehow Sana seems to have forgiven Aphra for breaking her heart and tricking her into countless scrapes and mission gone sideways. Now that Aphra has been hijacked, Sana will not stop until she frees her. She begins to put together specialists to rescue Aphra made up of people who have cared about Aphra deeply, but ultimately were pushed aside by Aphra for her own treasure seeking ambitions. Sana hopes the fact that she can forgive Aphra is enough to convince them to put aside their anger to help save her. This group may despise Aphra, but they are also the very few that have any love for her at all. That is the main message of this entire issue. Aphra may be a broken serial betrayer, but that doesn’t make her any less loveable or worthy of it. This chapter makes the stakes serious. It is no longer simply Aphra or Aphra and Sana against the galaxy. Aphra is in trouble, and if her friends turned enemies turned friends are convinced to help her, it must be deadly serious.

This issue is a bit of a crossover. In the past year the criminal organization has been a huge part of the overall saga, even getting its own mini-series. Throughout last Fall’s “War of the Bounty Hunters,” and the “Crimson Reign” multi-series events that followed it, many new characters were introduced as Qi-ra’s closest allies and advisors. One such character is The Archivist. An expert in Sith lore and history, she acts as a sort of seer for Qi’ra. She makes a brief appearance in this issue. Jumping from one series to the next is a good step for a character. It shows their versatility and popularity, which is pretty much how Aphra became the powerhouse character she turned out to be. The Archivist may have a much larger future in Star Wars. With a third multi-series involving Crimson Dawn starts this Fall, they is a very good chance she and Aphra will cross paths again.

The impact on the overall “Doctor Aphra” series can be felt in the fact that this issue is a showcase of characters from it in particular. The chapter even works in a few pages of what’s happening with Just Lucky during all this. The heart of the issue is when Sana’s squad really gets into action. Her squad is clad in many colors and so is the planet the eventually land on. In stark contrast, the discussion between The Spark Eternal and The Archivist is a deep red, reflecting the Spark’s menacing power. Just Lucky gets his own color scheme which is completely in line with his typical section of any given “Aphra” issue. The art is consistent with the rest of the series, which is good, because characters become instantly recognizable if they look the same issue to issue. The art in this series has been some of the best of all the “Star Wars” titles and this issue represents that well. The action in it is especially smooth and easy to follow visually. The issue gives one more treat before it ends with a surprise for longtime Aphra fans to sweeten the deal.

Aphra's rescue team have run into some old friends who might make their progress harder for them. At the same time, Just Lucky tries to live up to his name as he is looking for Aphra as well.