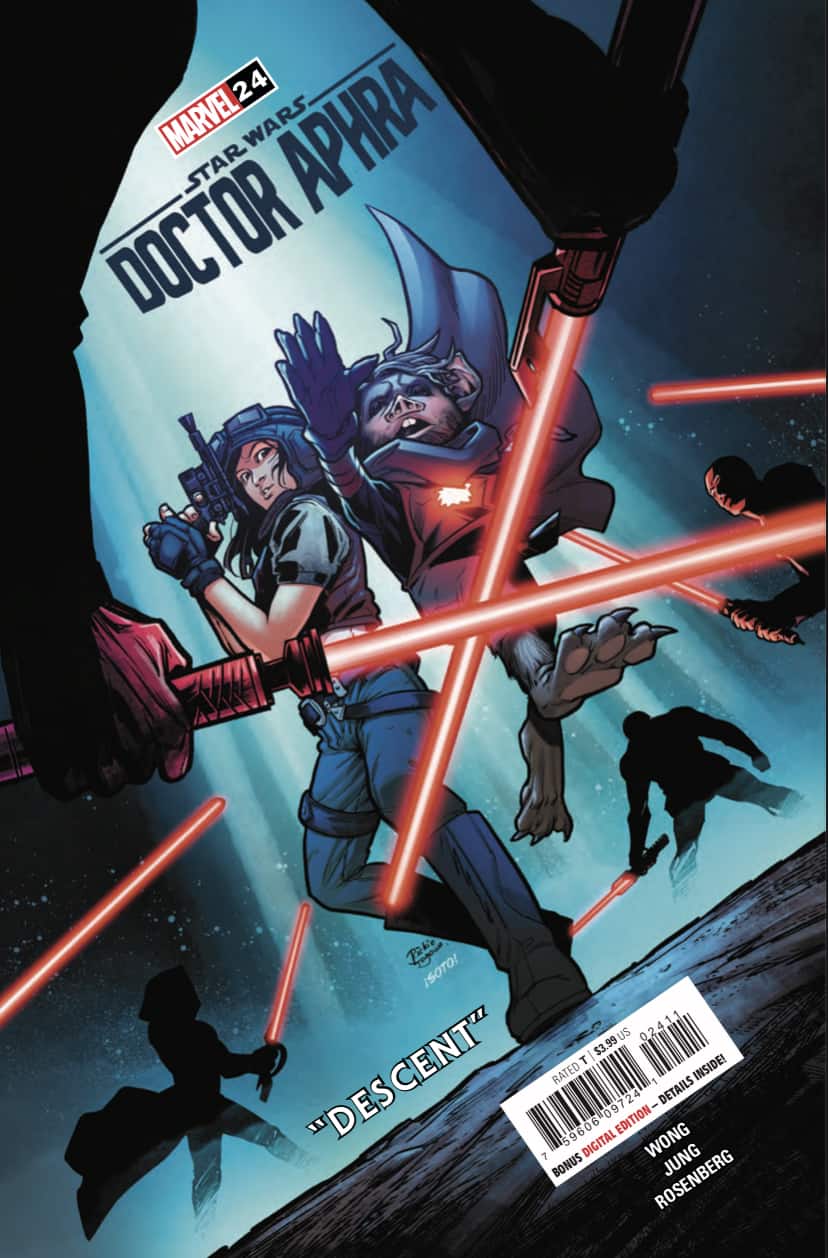 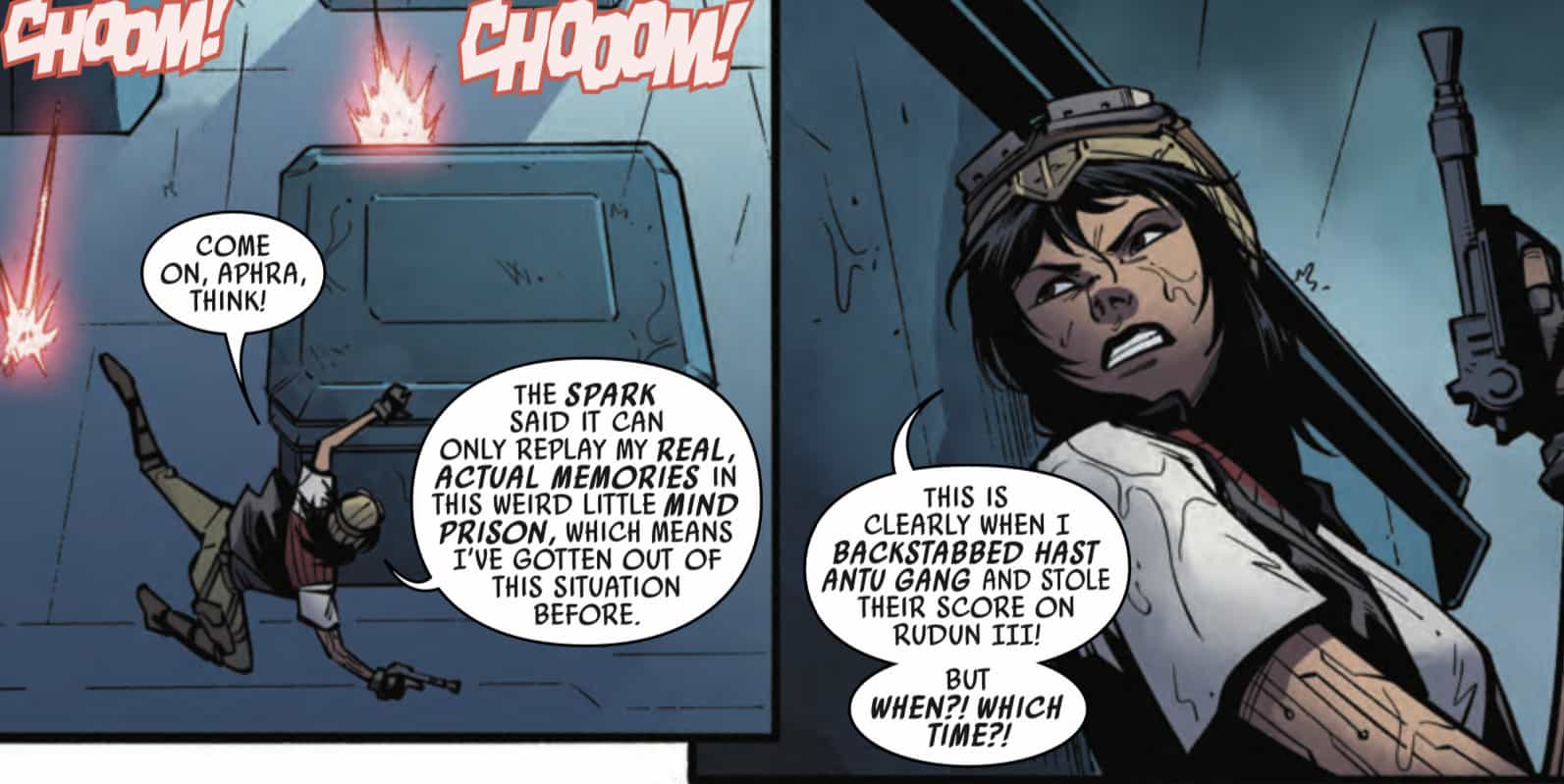 The Spark Eternal has possessed Doctor Aphra and taken her prisoner in her own mind. The powerful artifact occupied Aphra by showing her own memories mixed with those of its creator. Meanwhile her friends plot her rescue.

This series has had archeology front and center the entire run. The previous “Doctor Aphra” series and her original introduction in the first “Darth Vader” series involved her trying to stay alive or scheming, betraying one comrade after another. Those stories had very little top do with Aphra’s chief profession of archeologist. This series changed that drastically, having her searching for rings and powerful ancient weapons. This story arc pushed the envelope by making an artifact a character. The A.I. known as The Spark Eternal is meant to allow its user to mimic the Force techniques used by the Sith. In this case it has highjacked Aphra as it searched through her memories instead. This issues marks the first time The Spark shows any interest in communicating with Aphra directly. Beforehand Aphra has to watch helpless as The Spark fought her friends with her own body. What plays out is the history of an Ascendant scientist who created The Spark and how they were hunted by servants of he real Sith. It seems clearer and clearer as the issue goes on that the Chadra-Fan creator might just be the real personality of the Spark, or at least more than just a memory. 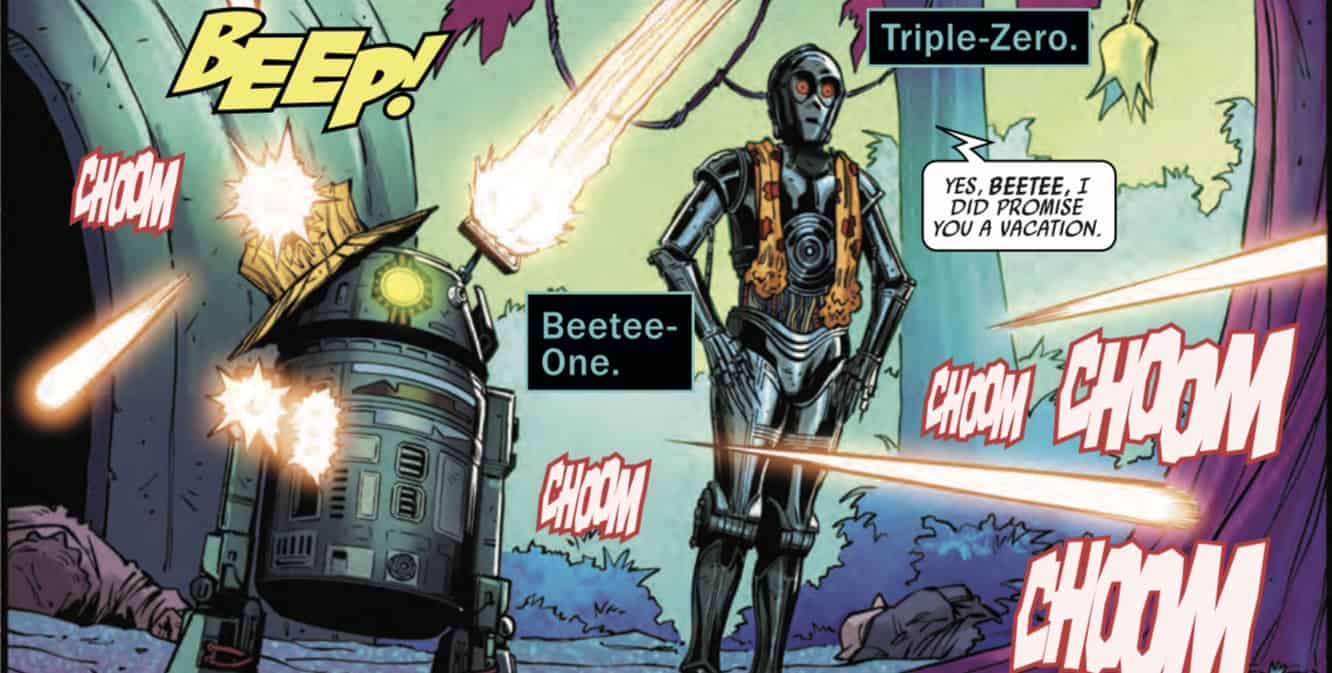 This issue, like many Aphra issues, is basically two stories being told at the same time. Often the formula is that the issue starts of with Aphra’s main plot, then cuts to Just Lucky in his affairs, then back to Aphra. This issue tweaks that equation a bit by replacing a Just Lucky segment with a Sana Starros one. She has assembled a team of former associates of Aphra. This particular chapter re-introduces Aphra’s murder droids, Triple Zero and Beetee. Hinted a couple issues ago, they made their grand reappearance and are now primed to join the story in earnest. These droids are fan favorites and date back to Aphra’s first appearances in the “Darth Vader’” series. The characters are simply very fun and funny characters, and will undoubably add a classic level to this arc. With this team now fully assembled, Sana has her crew and is ready for action. Her squad turns out to be a very well balanced team from all over Aphra’s history from the “Darth Vader” title through her series, including many from this one in particular. One thing “Aphra” comics have always done well is pulling together a group of interesting characters and having them form a massive team. Delightful chaos is sure to follow.

The issue runs a lot of double duty with art, color, and story having to cover Sana’s squad and The Spark’s vision. Both use very different styles and color schemes that offset the two separate settings well. Of course the memories of the Chadra-Fan fighting Darkseekers, hunters for the Sith, are tinted a Dark Sider red that mirrors the tone used in the current “Darth Vader” series to show his dark memories. This whole sequence is pretty unique to “Star Wars” comics of late. The comics stick pretty closely to the films, which really dealt with very little Sith warriors. Even “The High Republic” takes place in a time where Sith where hidden. The only times a new Sith or class of Sith underlings can be introduced is through memories or visions. This is something rare, but not at all unheard of. Getting to visit the memories of an ancient spirit who dealt with them directly is a nice way of getting to see a few red lightsaber blades as well as expanding the overall history of the Sith outside of the films and shows. Hopefully this issue won’t be the last time readers get to meet some Darkseekers.

Sana’s team is ready to go save Aphra. Meanwhile Aphra learns more of the Ascendants and is about to encounter another old friend.