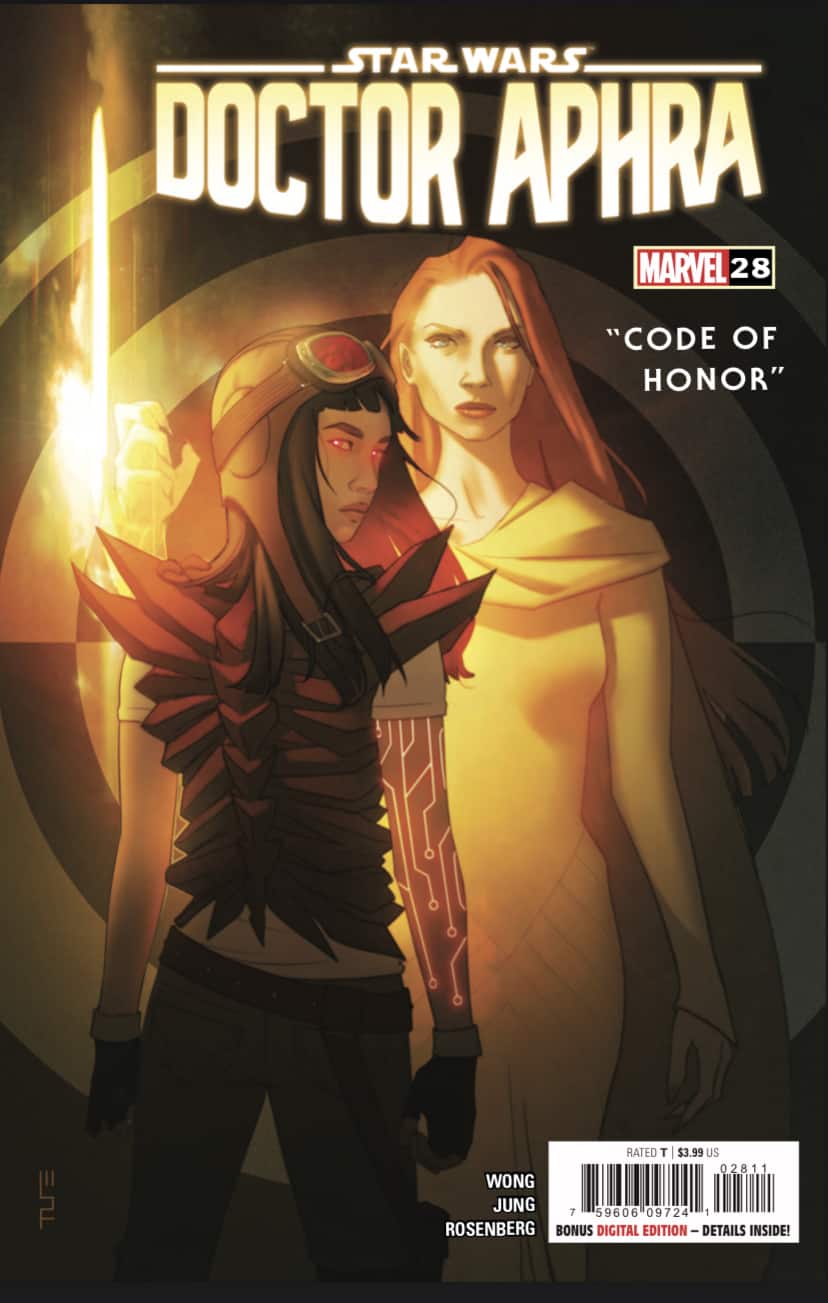 Ever since the beginning of this series, members of the Tagge family have kidnapped friends, sent Aphra nd her crew on impossible missions, extorted them, and used them as pawns in their conflicts with Crimson Dawn. Sana Starros aims to clear her debt by the only way she knows how, by going after the head of the Tagge family, Domina Tagge. Meanwhile Boushh and his crew have been hired to protect her.

The first and foremost thing that makes this issue stick out is the fact that Aphra is basically not in it, despite being the titular character. The cover art depicts her with Domina Tagge in a somewhat static pose, but she isn’t at all involved with the plot to kill her. All the characters in this issue have been, for the most part, characters that originated in both “Doctor Aphra” series, with most of them from this later series in particular. Aphra came from the first “Darth Vader” series, where Sana came from the first “Star Wars” series since Marvel has returned to publishing comics for the legendary franchise. Domina herself was a character from the original 70s “Star Wars” series. Despite those origins, these three characters have become constants of this series and play much more developed roles in these series than from when they were originally introduced. This is important because without Aphra there, this issue hold up extremely well with her support characters alone. The issue has some finality as far as the Tagge family goes, and although it doesn’t finish a specific arc, a lot of major plot gets tied up despite Aphra’s absence. These characters have grown strong in these twenty eight issues, including Sana and Domina, and they now stand almost on their own. With Aphra bring possessed by the Spark Eternal, she has been more or less diminished as far as her strength of character as of late which further allowed these characters to grow even more. 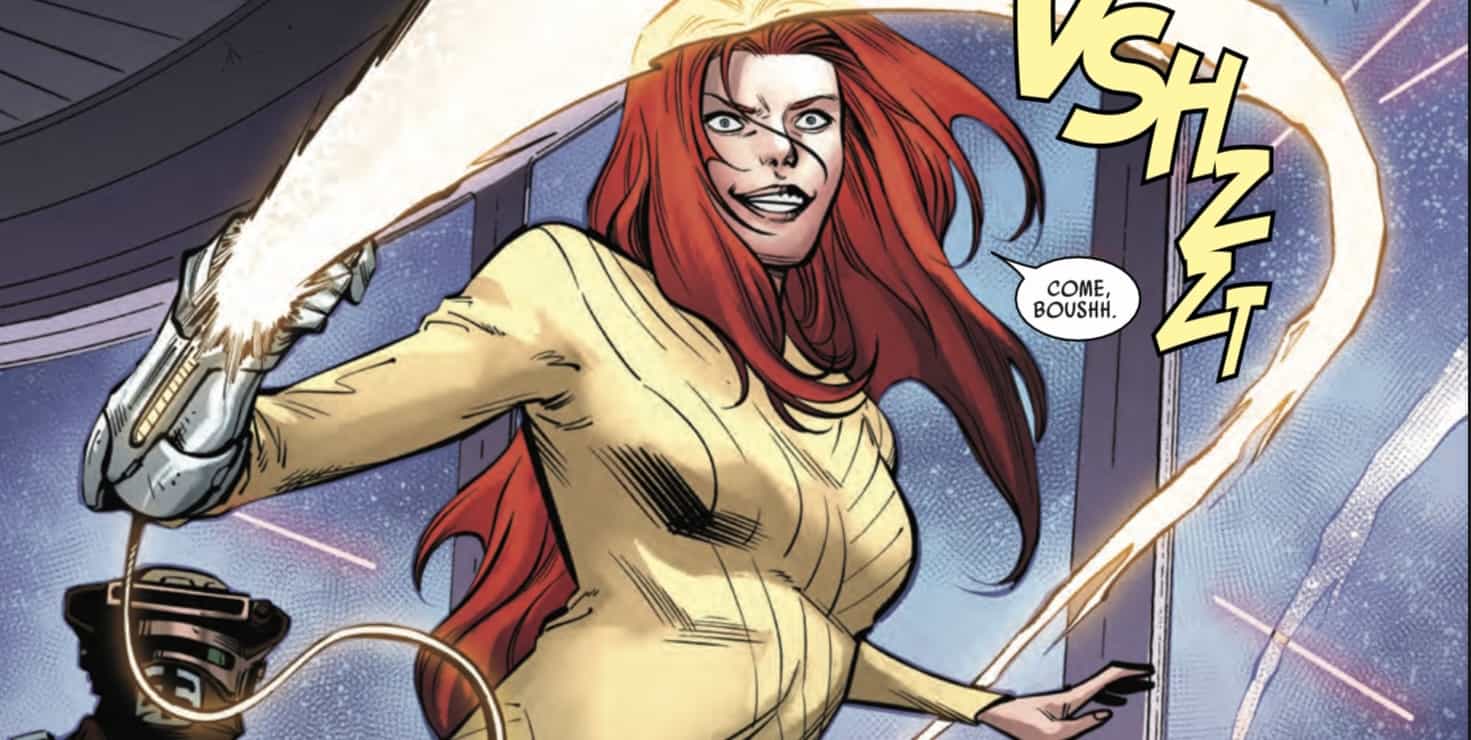 Another unique and great thing about this chapter is to get to see Boushh and his crew. This character has historically been just some faceless bounty hunter who lost his uniform to be used as Leia’s disguise in Jabba’s Palace in Return of the Jedi. The character showed up in a Star Wars Forces of Destiny animated short, but with little to no characterization. “War of the Bounty Hunters” brought him to light in a one-shot issue about him and his crew, who dress in a similar fashion. He makes return in this series with his gang and they get to have lots of action in it. They are some of the few characters in this issue that aren’t typical characters for the series. Readers get to see a little more of their personalities, similar to the Knights of Ren who were basically faceless baddies until they got comic book backstories. As far as this era goes, this timeline is getting extremely close to the events ofReturn of the Jedi where Leia has his suit. It would be nice to see the story of how she got that suit play out in comics, but with the amount of character establishment present in this issue it is clear that much more story could be told. Perhaps Boushh and crew might show up again earlier in the timeline as part of some other series. 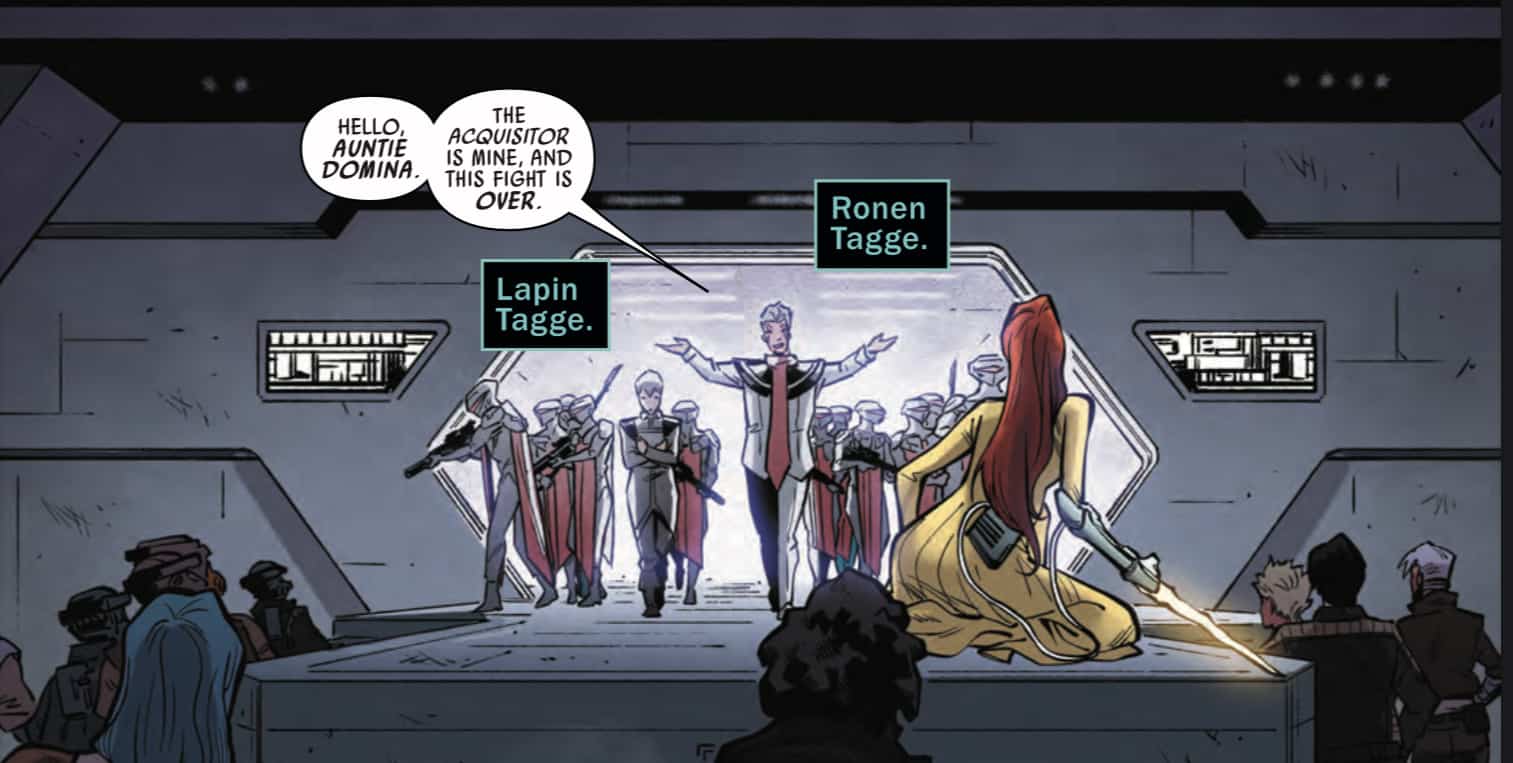 Everything in this issue fires on all cylinders. The art and colors pop all throughout, but they mostly support the writing. Not only is it a chapter that potentially wraps up a very long entanglement with the Tagges, but sets a great tone for how the series can move forward from here. On top of that the issue had a lot of humor, sarcasm, action, and twists to make it a classic. Accomplishing this without Doctor Aphra is also quite and achievement as she has been such a huge star in the expanded lore. Something that gets a bit more focus than a lot of issues in this series is that is has a big space battle. This is not at all unusual for “Darth Vader of the “Star Wars” series, but it is not something usually present in “Doctor Aphra.” It makes for an excellent addition to an already stellar chapter, which clearly fits into the overall saga surprisingly well. 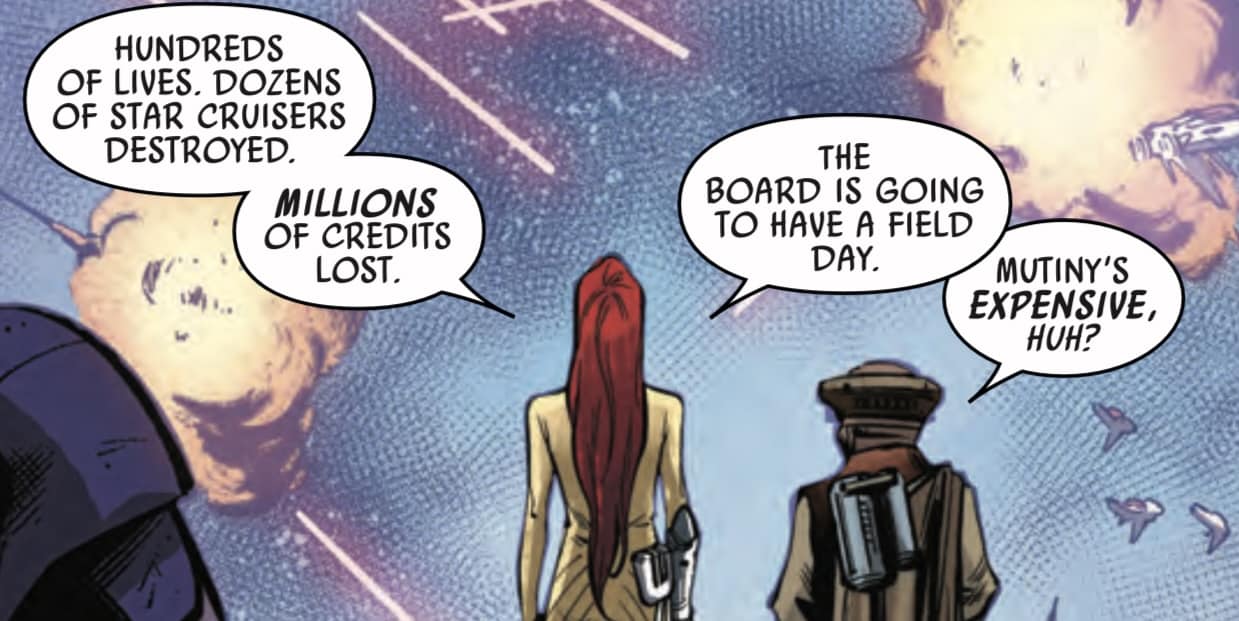 It’s time to get back to Aphra and the Spark Eternal as well as the troublesome Qi’ra, but Sana has made a big gamble that might have cost her the trust of the crew. They are starting to see a lot of Aphra in her, and that’s not necessarily a good thing.