Doctor Mirage’s mind-bending mystery to the other side leads her to a frightening new foe!

How death-defying is Doctor Mirage?

Featuring the first appearance of a terrifying new villain! Enter: the Embalmer!

The death-defying Doctor Mirage is forced to live up to her name in the latest issue which finds Shan wandering through a vibrantly unfamiliar Deadside with half-truths and secrets abound. To find Hwen once more, she will need to confront some truly terrifying and deadly forces leaving us to only hope she can make it out alive. 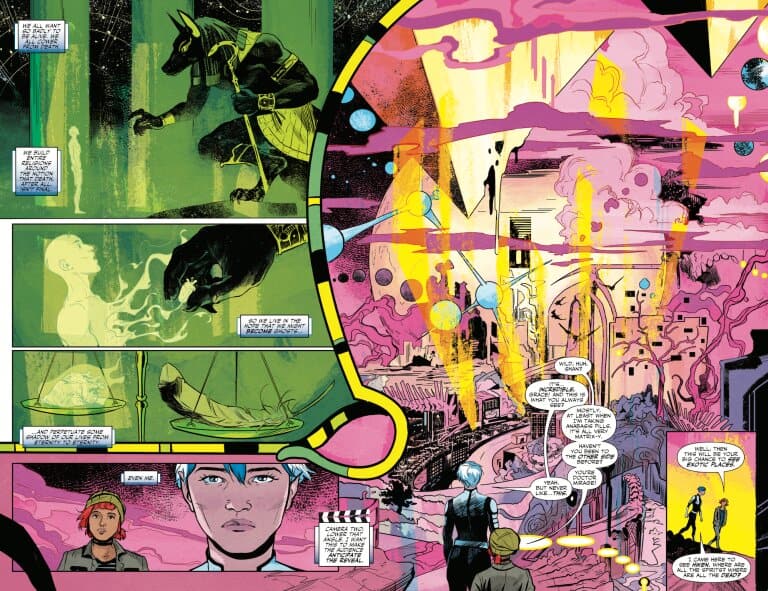 There is a moment in the beginning pages of Doctor Mirage #3 where the “director” voice that occurs in this series states “I want this to make the audience anticipate the reveal”. This anticipation and the tension it creates is ultimately the driving force behind Doctor Mirage #3. We follow Shan and Grace deeper into the starkly unfamiliar Deadside only to find a horrific new villain that delivers what could be the most shocking cliffhanger I’ve read all year.

Doctor Mirage #3 feels like the issue where this series finds its real stride. The pacing is perfect and the dialogue is engaging, which helps to keep you invested until that devastating reveal at the end. The danger of the journey isn’t just realized in the end though, the presence of evil is all around them and one even forces Shan to use combat magic for the first time in months. It was in the moment that Shan strikes down a deadly beast with a magical blast when I had the realization that this creative team should absolutely be given an ongoing series for Doctor Mirage. It’s just that good.

The visuals are some of the most powerful yet, which is definitely something considering just how much we’ve been given so far. The psychedelic influence is prominent, but the dark twist takes it to an entirely new place. Every page is just full of stunning artwork that begs you to keep looking.

The treacherous journey into the Deadside could be more than even Shan can handle though. While suspicions continue to mount surrounding Grace’s motives, there are much lethal foes at hand. The new villain, Embalmer, is nothing short of terrifying. The mythological-inspired design suits the immediate environment and helps to pull readers into the danger. This isn’t just some brief fight that shows Doctor Mirage adeptly handling another baddie. The confrontation is a struggle and we feel just how hard Shan has to fight in order to even hold her own. But the cliffhanger shows that even Shan herself might not be as death-defying as we may think.

If you haven’t been following along with this series, I couldn’t recommend it enough. It’s welcoming to both longtime and new fans alike, but it’s important to start at issue #1. By the time you get to Doctor Mirage #3, you won’t be able to stop talking about just how cool this series is.

Doctor Mirage #3 is easily the most powerful entry in the dark, yet remarkably vivid series that will absolutely capture your imagination. Take note, this is how you do cliffhangers.