Doctor Strange #15: Who You Gonna Call…Everybody 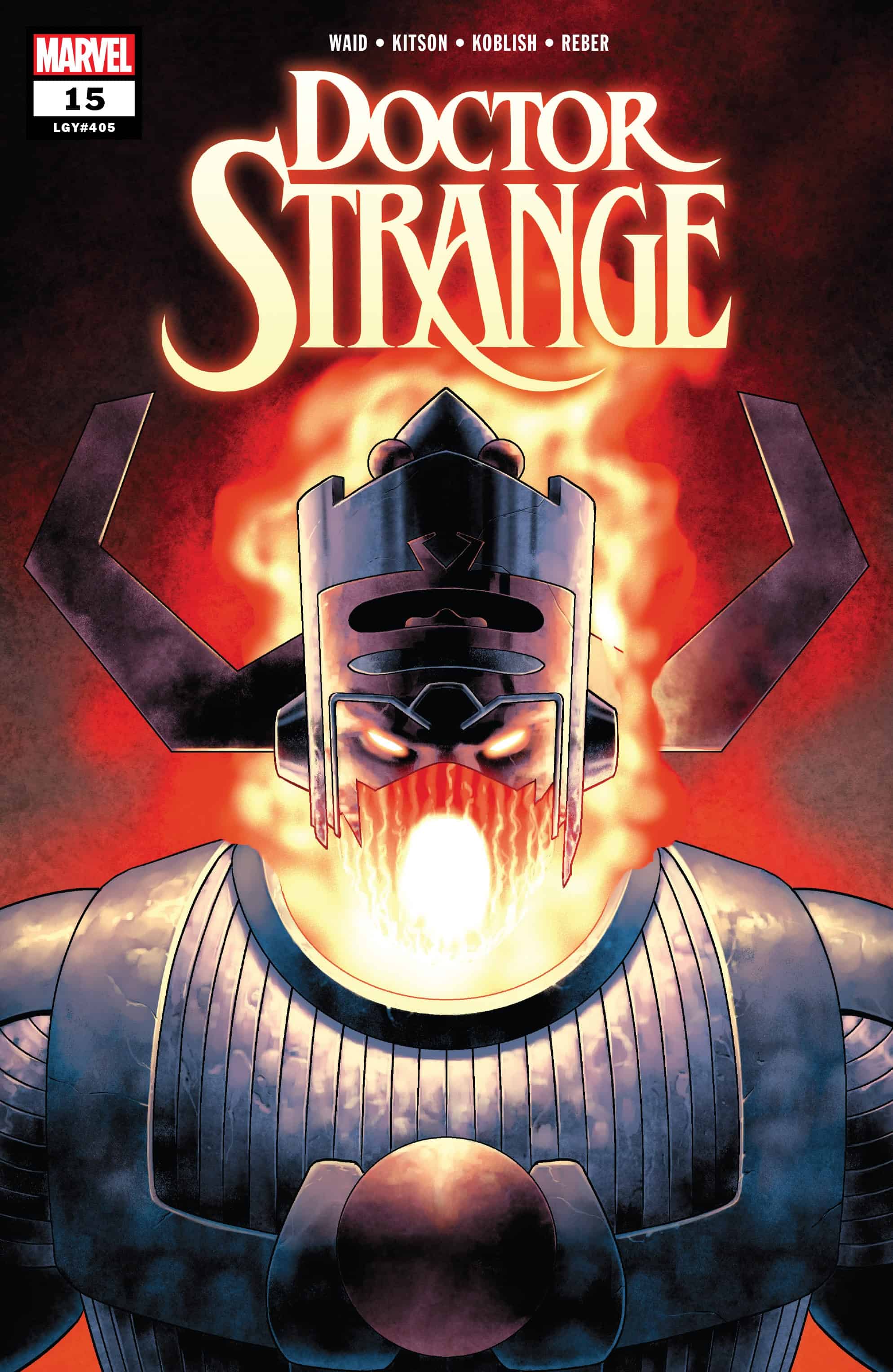 As Mephisto is revealed to be the invisible puppetmaster behind everything, Strange discovers the games of Dormammu. But Dormammu fails to heed his warning and falls victim to Galactus himself. In a bold counter move Strange vows to put a stop to it once and for all by making a series of deals. First with Ykolon to get to Mephisto, then with the devil himself, who tries to hide his own desperation at unfolding events and their effect on his domain. Strange goes on to implore the Abstracts for the fate of mankind, to no avail. In a final bid to resolve things himself he calls on everyone in his little black book and rouses them for an epic battle between science and magic. 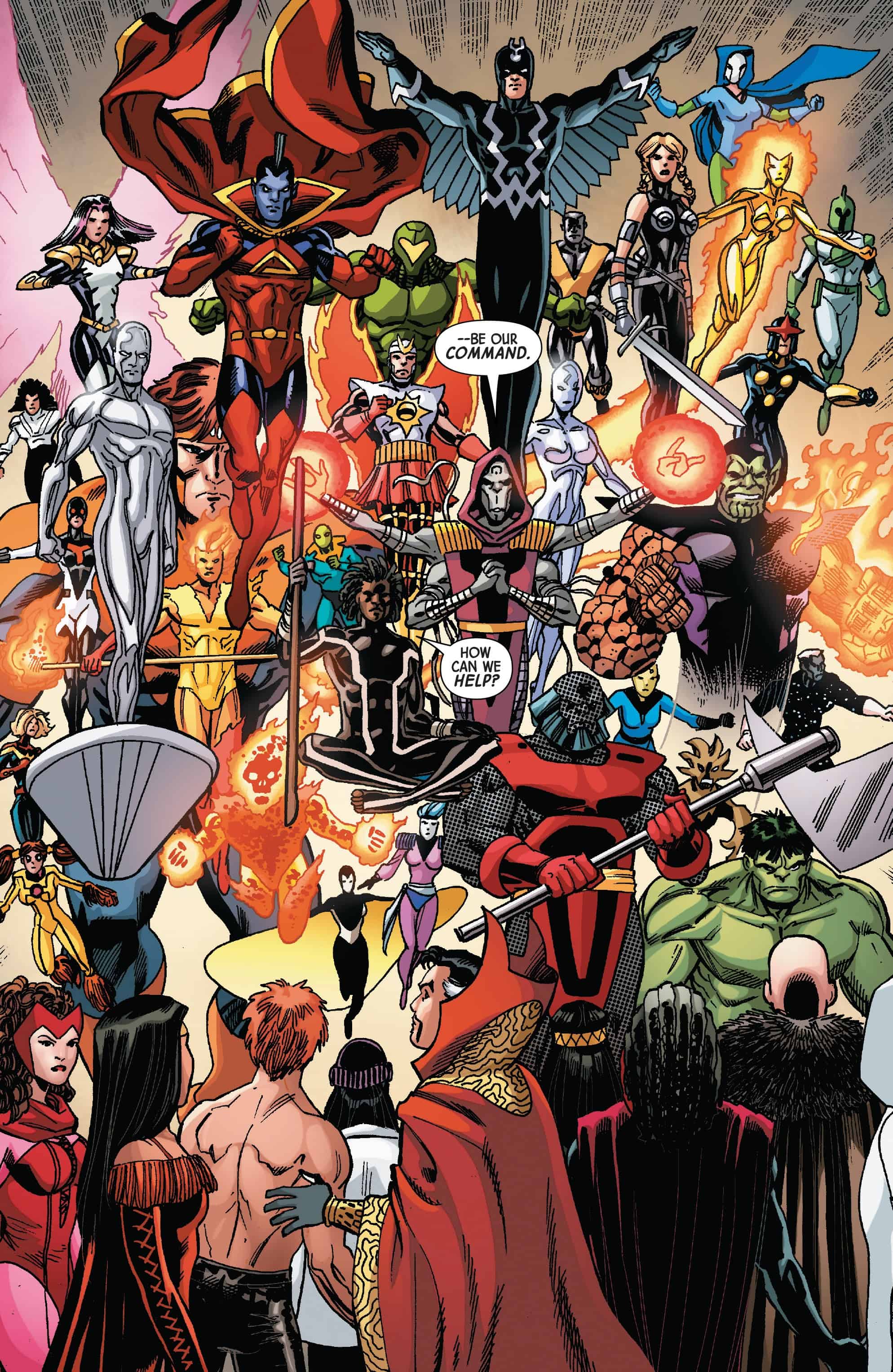 Story/Characters: Much like Dormammu I feel Waid has bitten off a little more than he can chew here. The plan is bold, but the execution is falling a little short. And I don’t think this is actually the fault of the writer. It’s the format. It’s clear that the plot, backdrop and cast of characters involved are so grand in scope it all lends itself to something more deserving of the status of Marvel Event of the year, rather than just an arc within a title. Especially a title that has been announced to be finishing in a few issues. When you throw in the Who’s Who of science and magic within the hero community, add the major movers and shakers that are basically End Level Bosses such as Mephisto, Dormammu, Eternity and the Living Tribunal it has the potential for some epic confrontations, that concerns pretty much everyone in the Marvel Universe. Throw in several other worldly domains such as the Shi’ar Empire, halls of Asgard, the Kree and every previous herald of Galactus known to man and you have yourself a grand space opera worthy of War of Kings or Annihilation. If only there was a way this could have happened. Something like a major War? Perhaps fought between Realms? 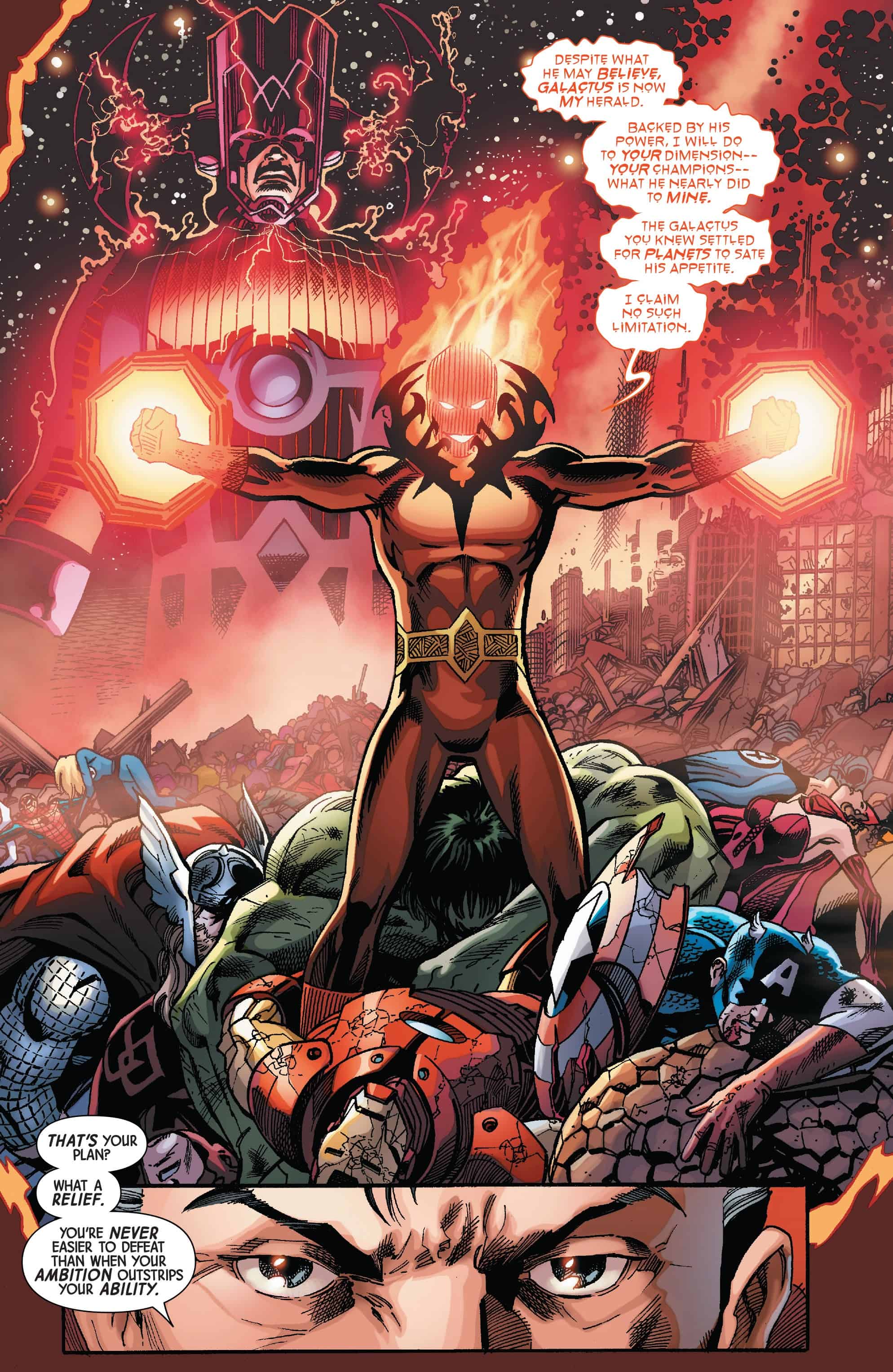 Writing: That being said the writing itself does an admirable job of attempting to catch lightning in a bottle and Mark Waid gives it his all. I had initially written this issue off as just an over bloated story with too many unnecessary characters. But with what is to follow I think it deserved a second read. There was dilemma after dilemma and rousing last minute saves that injected more drama than could be contained within even the staging area of the Mystic Realms. Brainstorming between Abstract beings of infinite power and demons from hell dimensions. Mephisto’s own kingdom begins to show signs of technological infection. Mankind witnesses the magical infection in it’s war effort. And Galactus shows signs of reaching his zenith point, going from a being of destruction and obliteration to one of creation. 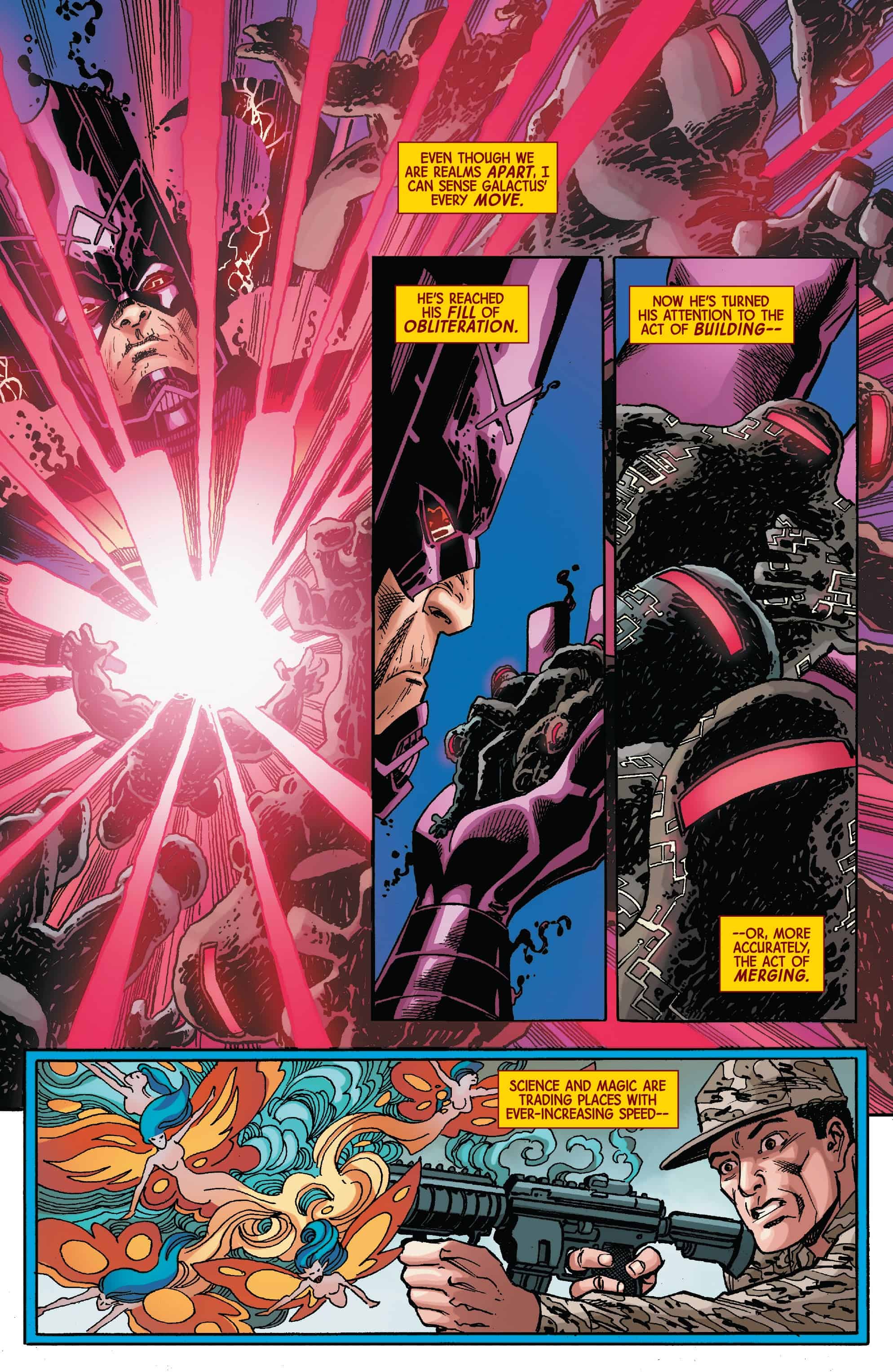 And there is even time for a little personal interest subplot as we see things heating up between Stephen and Clea, giving hope for reconciliation. Which I had hoped was going to be on the cards ever since the conclusion of Damnation, but had given up on since the start of his latest forays into space and the introduction of Kanna. I hadn’t even considered Waid would pick up on it at all, let alone make part of the unfolding saga. So it gives me hope that when this all ends things can be set up for a new stage in Strange’s tale in the future. 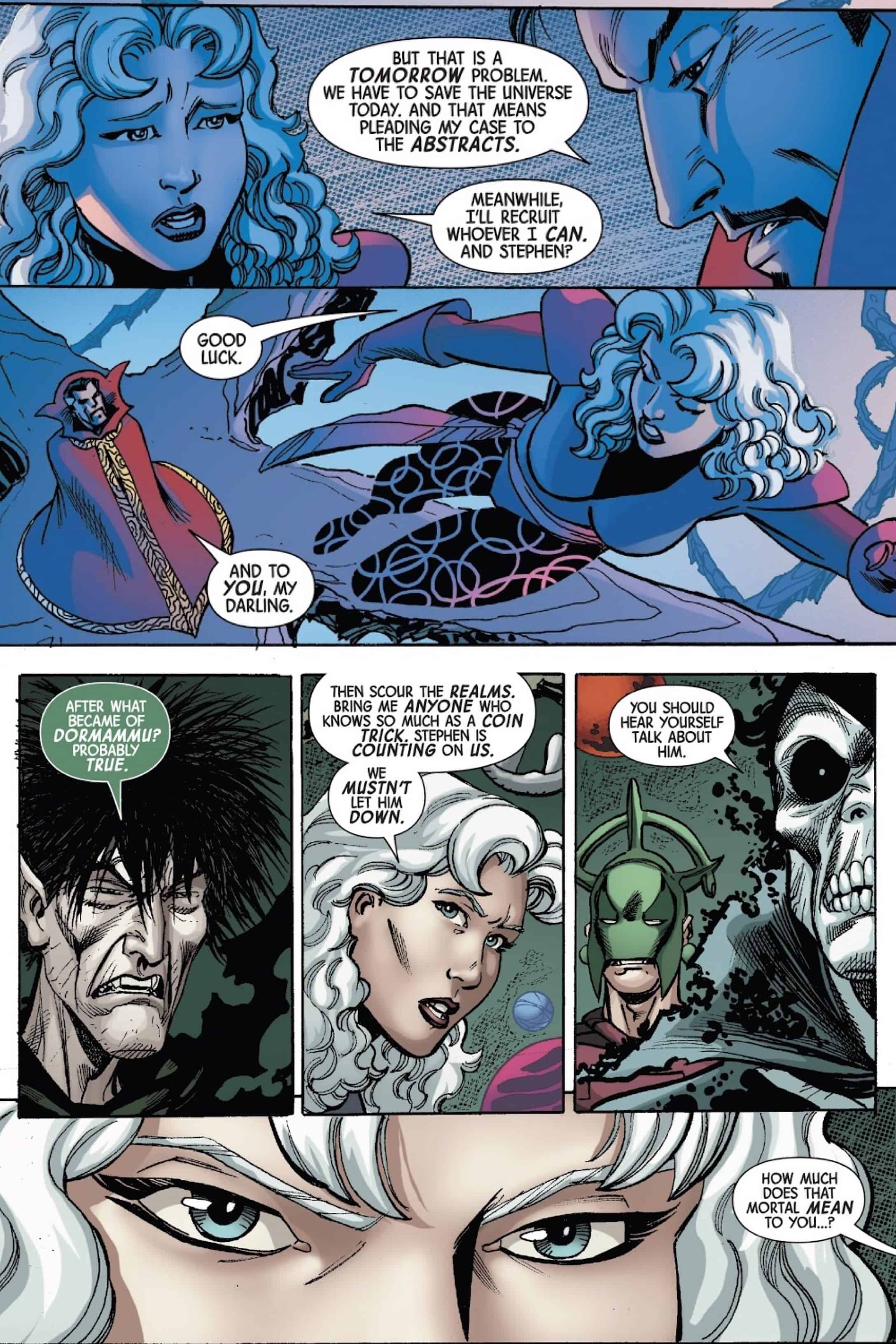 Art: And both Barry Kitson & Scott Koblish match Mark page for page with art that is once again reminiscent of the Kirby/Ditko era. From giving us a dramatic last minute ‘Endgame’ charge of the cavalry and some epic space opera style scenery. The image of Strange going toe to toe with the Living Tribunal and Eternity and still managing to look imposing, despite appearing dwarfed by the two omnipotent beings. And last but by no means least the awesome image of Galactus basking in his glorious transformation and becoming something that can barely be contained by the page. 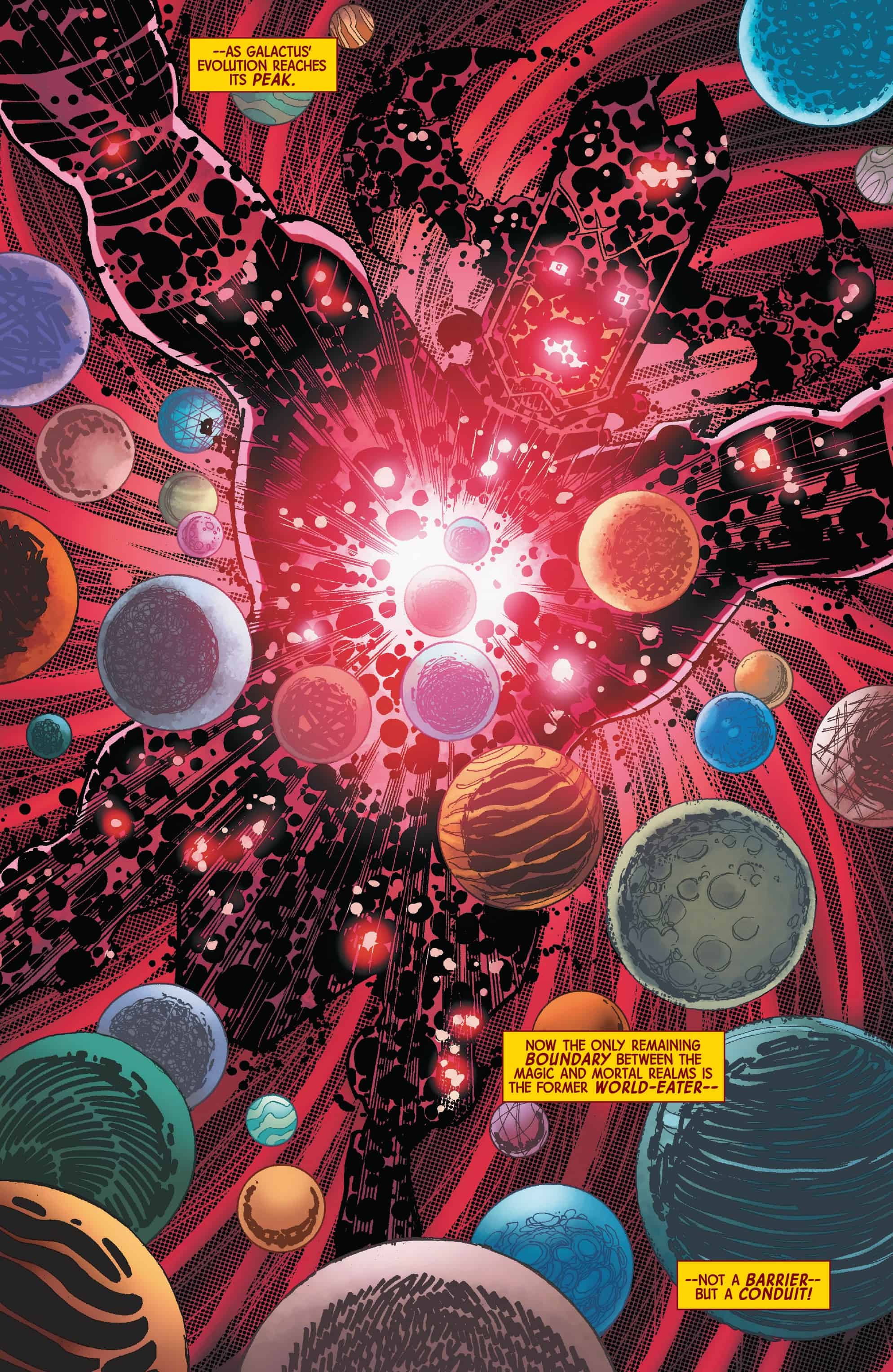 And once more Jesús Saiz reinforces this feel of the epic with his cover perfectly, the image clearly defining the grand scope of the story with the threatening image of Galactus harnessing the energies of Dormammu. And so I think it needs reiterating that this overall plot was wasted on an arc of a closing title and could have been another of Doctor Strange’s defining moments in the annals of Marvel history. This is always something Marvel seem to miss, from the Empirikul and the battle for all magic, Loki: Sorcerer Supreme and the reintroduction of Sentry, up to and including Damnation with the birth of the new Midnight Sons that never were. So many implications for the wider Marvel Universe that are just hidden in the background rather than made a big deal of. Shame on you Marvel.

An intriguing idea that just doesn’t seem to follow through on its potential. The magical tip of an iceberg that could have rocked the boat for all wielders of science and magic. If only it were given the stage it deserved.

Doctor Strange #15: Who You Gonna Call…Everybody