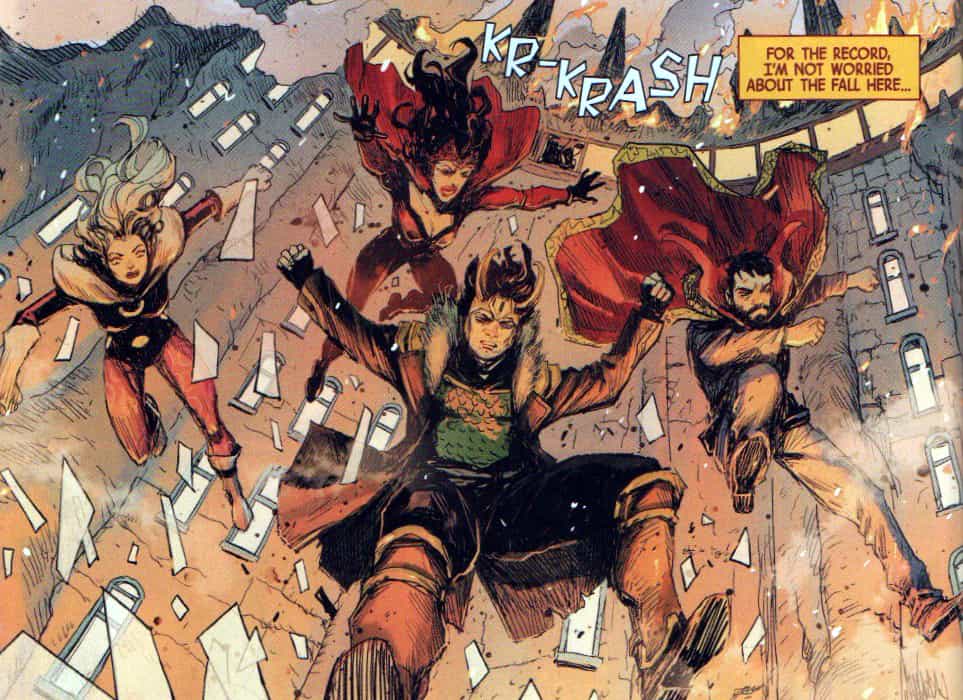 Strange needs a miracle and the help of some good friends to escape Hell after Mephisto catches him cheating at cards. But he won’t get far on broken legs. 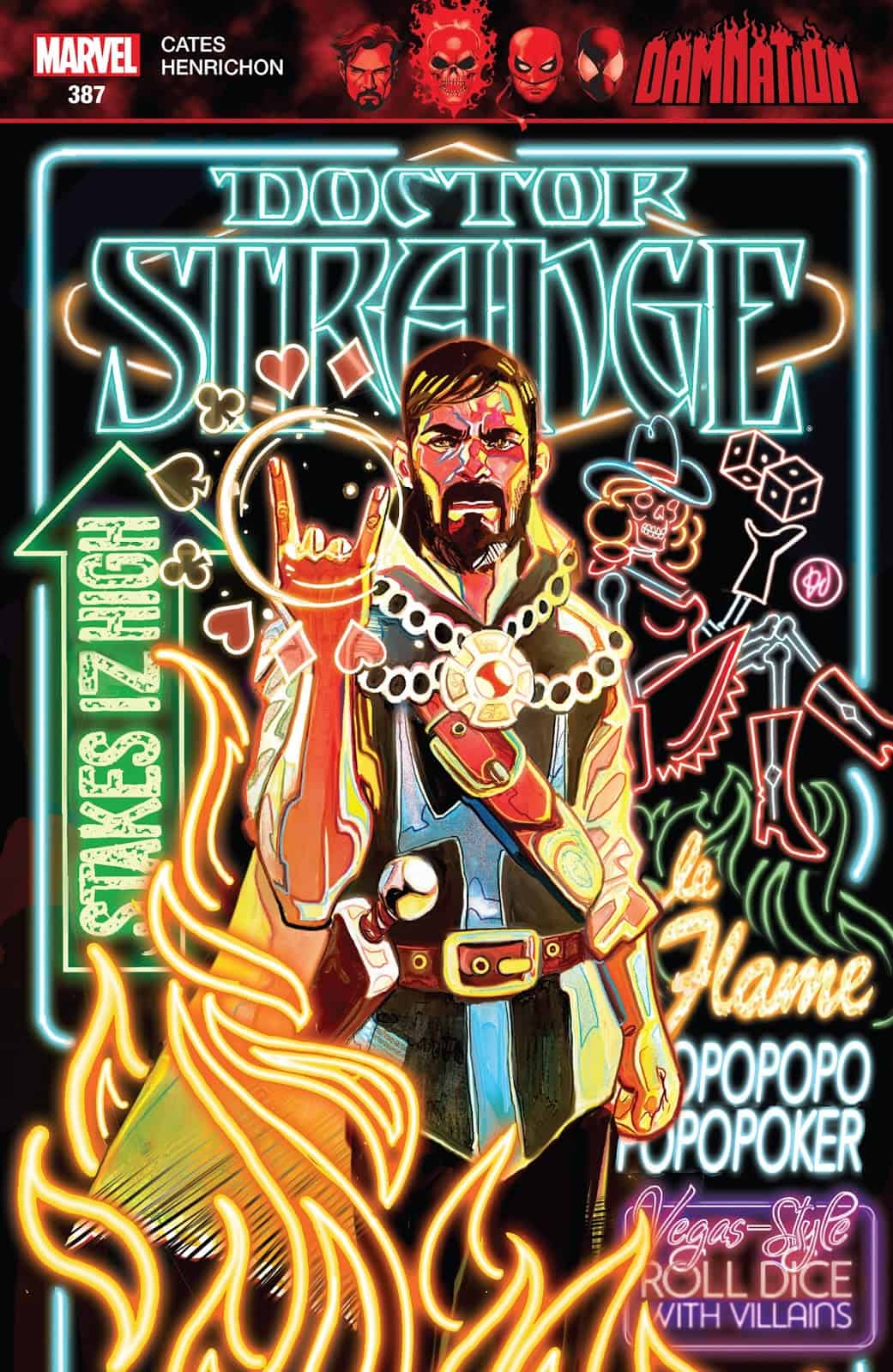 What You Need to Know:
Having been rumbled cheating against Mephisto at Brimstone Blackjack Strange lies literally broken after facing a possessed Thor. Meanwhile thanks to a warning from Bats, Wong gathers possibly the only individuals qualified to rescue him from Inferno Tower.

What You’ll Find Out:
These events take place alongside those of Doctor Strange: Damnation #2 and Ben Reilly: The Scarlet Spider #15.
As Strange lies battered and broken he hears a familiar voice and opens his eyes to a vision shared by Wong of current events. As Wong fills him in on the reasons for his choice of champions he breaks the news to Strange of the transformation of the Avengers as well as the city below and its people, telling him to be ready to leave when they arrive as Strange tries to tell him of his predicament. 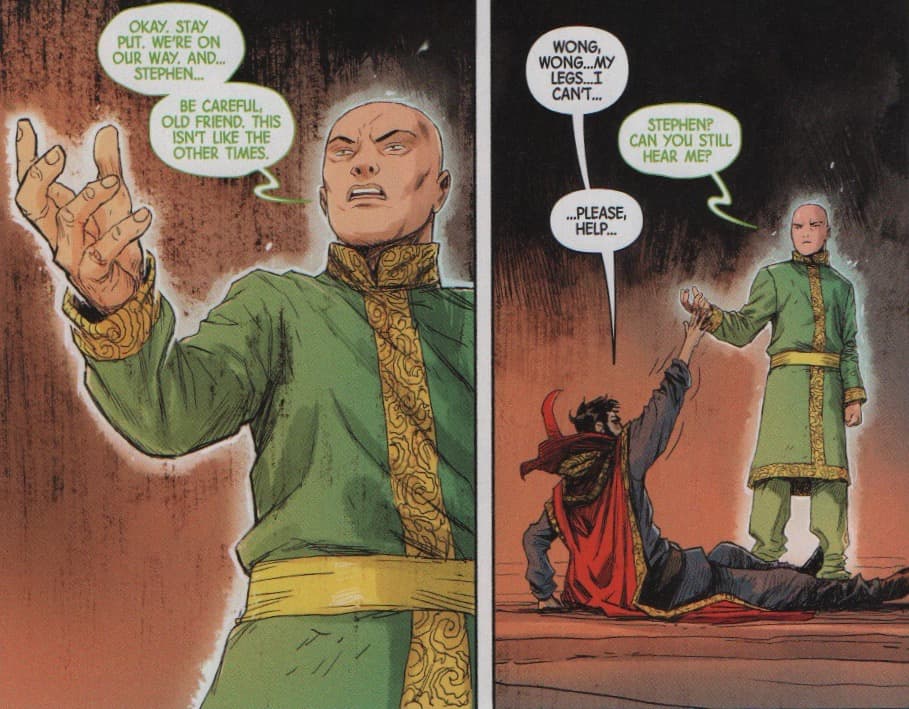 Wong seemingly cannot hear and just goes on to tell him they have someone on the inside and that they lost contact but that person is still around. Strange tries to ask if it’s Zelma, as he believes she has been compromised based on knowledge Mephisto has previously revealed to him. However, Wong is cut off from telling him one last thing as a shadowy figure breaks through the spectral image. 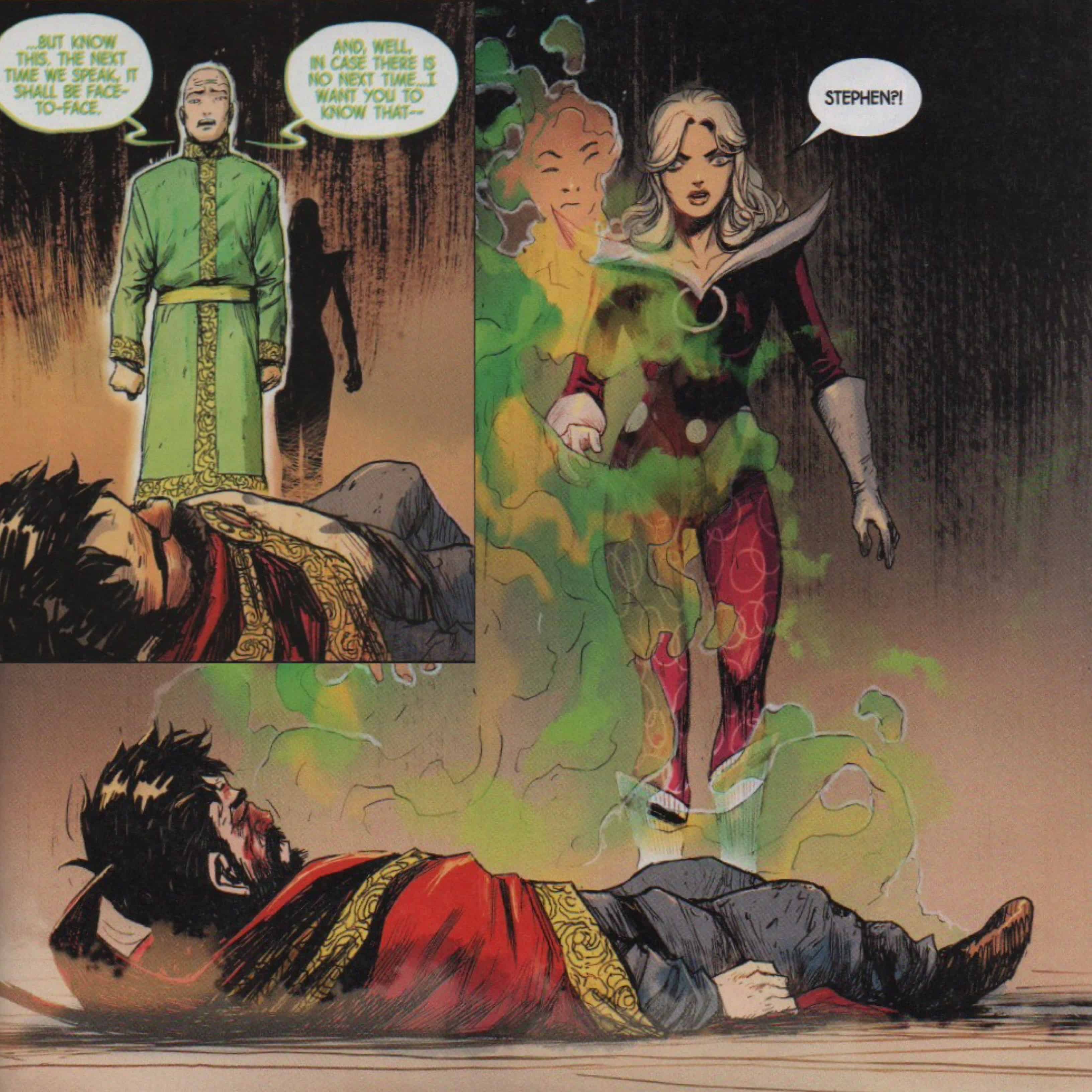 As he muses on the possibility that he has died, Clea informs Strange she was the agent on the ground and she has come to rescue him. Convincing him to trust her she hugs him and begins to examine the damage to his legs. She comments she overheard him tell Wong that he thought it was Zelma and she remarks it is interesting he didn’t think it was her. Clearly uncomfortable with the turn the conversation is taking Strange asks why she is bringing this up now and she confesses it is to distract him while she sets his broken leg. Telling him she needs him stable before the cavalry arrives he asks her to let him get his breath before doing the next leg, as he knows there will be time before Wong shows up. Ignoring his request she reveals it isn’t Wong she called. She has been there a while and has been busy. 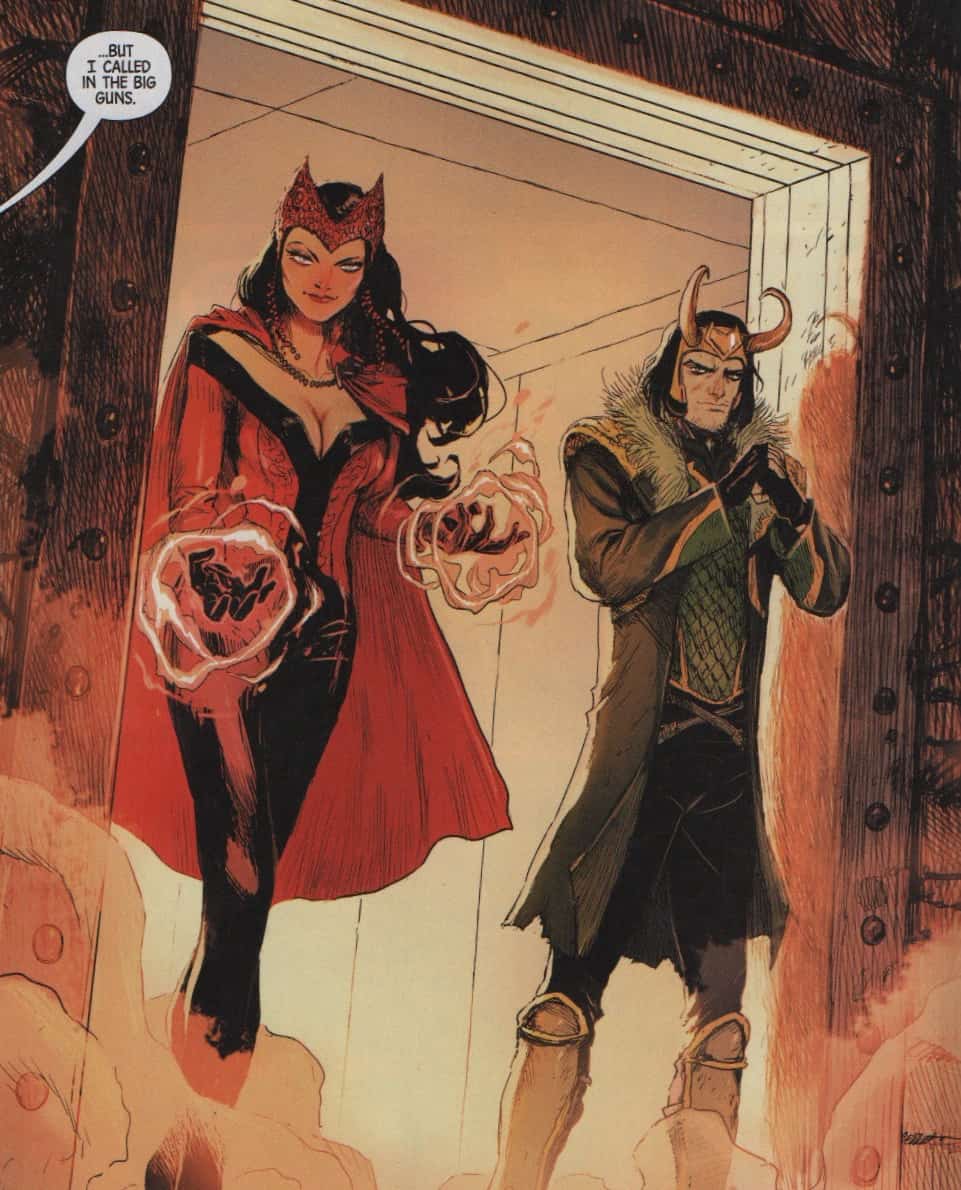 Strange doesn’t even try to hide the fact he is none too pleased to see Loki as Clea protests she had to do something. Loki reminds him he warned him of the very thing going on around them and as they begin to settle into the bickering routine they know so well and it takes Wanda to break them up. Stephen points out his legs are still broken and Wanda fixes them, wickedly commenting that it would be a sight to see having Loki piggyback him out. Loki joins in offering to break them again if he’d like and Strange has to relent he’s pleased for the rescue but is worried about their souls being added to Mephisto’s ranks. Wanda flippantly comments they have a plan for that, to simply not get caught. Loki points out the corridor outside is infested with demons and offers to deal with them, before Clea states that they could just be transformed humans and they have to find another way. Thus prompting him to kick out the window, allowing them all to jump out and land amongst a mass of demons. The jumping doesn’t worry Stephen so much as where they are landing. 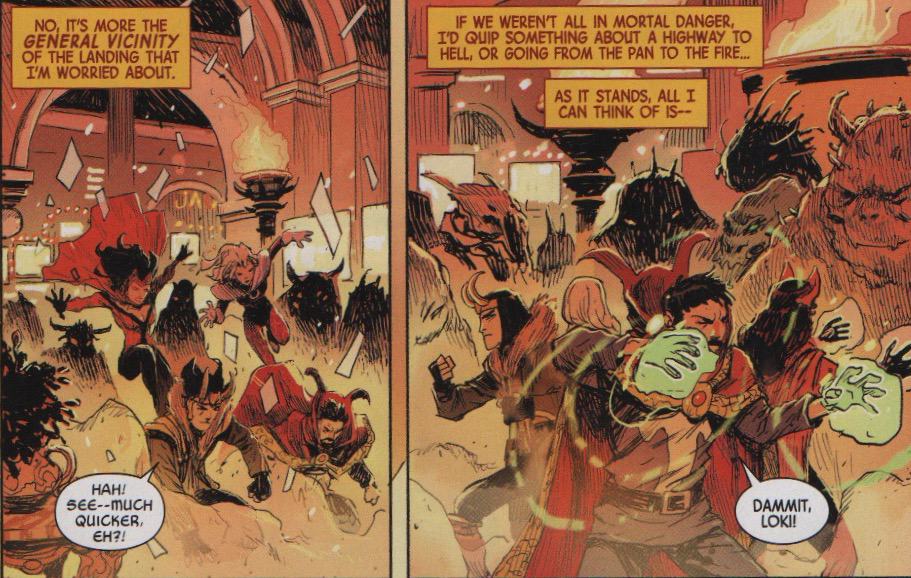 Strange nags Loki for trying to be overly dramatic, remarking that this is why he was a lousy Sorcerer Supreme, with Scarlet Witch telling him to shut up before Clea gets grabbed. Finally letting loose Strange vents his anger and disperses the demons surrounding them, clearing the field. But it’s too late, Clea is gone. Wanda remarks at Strange’s show of power but it may not be enough. Loki notices their missing compatriot is the least of their problems. 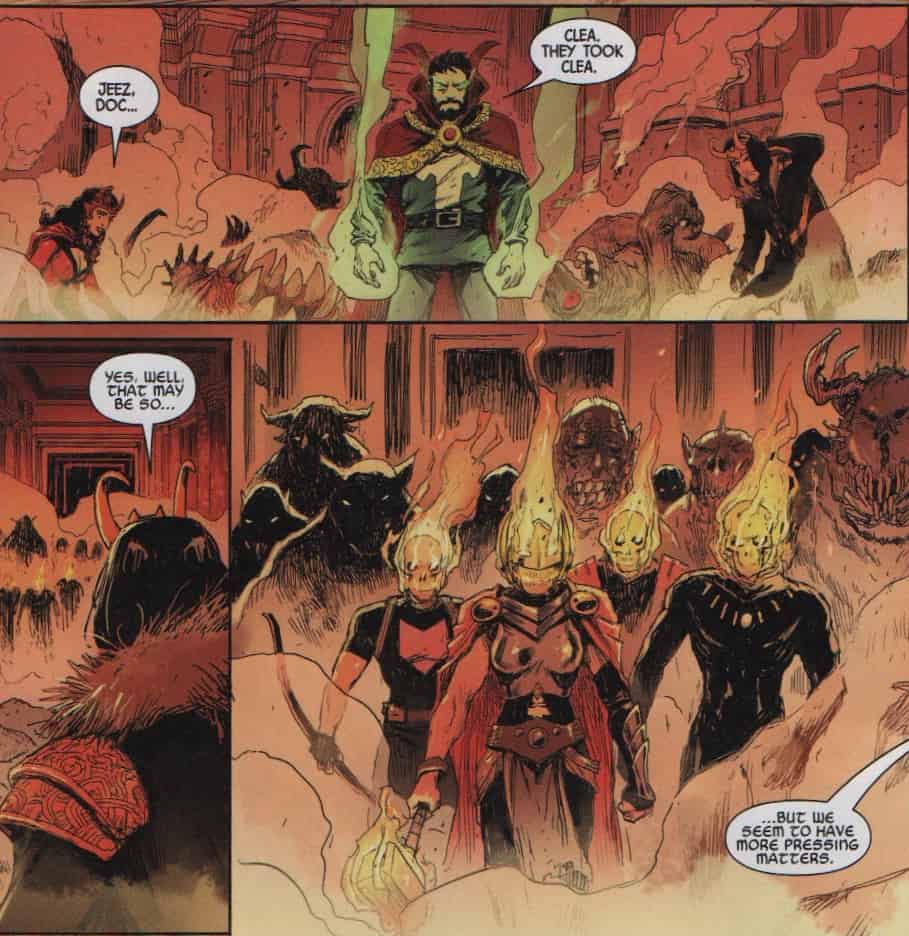 Watching from his tower Mephisto muses on the fact he hasn’t seen a good show like this in ages and congratulates the figure emerging from the shadows. Holding out a Martini glass he is joined by none other than Clea and he tells her to remove her disguise and she reveals herself to actually be the possessed Captain Marvel. As he asks her if Strange had any idea she remarks he didn’t feel her take a thing and the glamour seems to be holding. As they watch the spectacle beneath them we see that, what Strange perceives to be he and his allies holding back the possessed heroes, is, in fact, something else entirely. 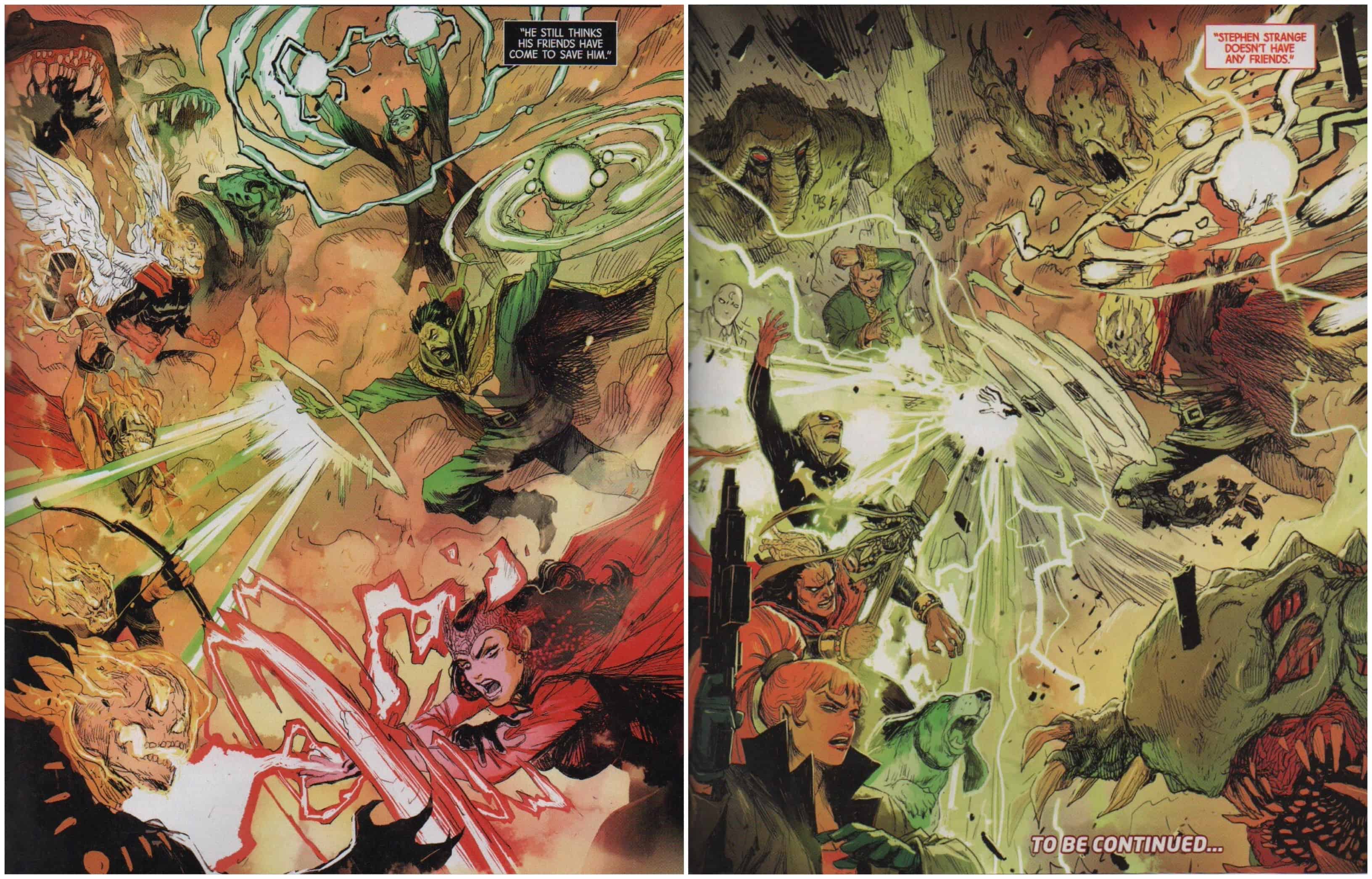 Mephisto gloats that Strange is alone without friends but he may soon be eating his words. Stephen has more friends than he thinks. Zelma still hasn’t shown up yet. Of course, anyone who has already read Damnation #2 (and if you haven’t WHY NOT?) knows it wasn’t a rescue but still even I had a moment where I hoped he stood a chance of getting out. And for some reason I still really wanted it to be the real Clea and not a possessed and illusory Carol. I had a moment where I wondered why Mephisto even needed to use her to do that and still simply use demons masquerading as Loki and Scarlet Witch, but it made sense as he would have needed to believe in Clea first then the rest would have been easier. Even doubting that it was also Loki and Wanda it was still interesting and fun to see the interchange, especially Wanda’s comparing wands comment. But even then it is clear the ribaldry goes a little deeper than friends rescuing a belligerent and unwilling Stephen. The ribbing Loki and Wanda both give him should have been his first clue. Maybe not Loki so much as this was true to form but definitely Wanda being so scathing was an indicator.

Wicked art this issue as well, in every sense of the word. The image of the final shot in juxtaposition with what Strange THINKS is going on was stunning but is far from the only treasure this issue. From Clea showing up to minister to her once beloved master, the ‘Wandemon’ smiling devilishly, Strange all glowy-eyed and full of magic right down to Clea revealing who she truly was, literally face-meltingly hot, this arc seems to suit Niko very well. 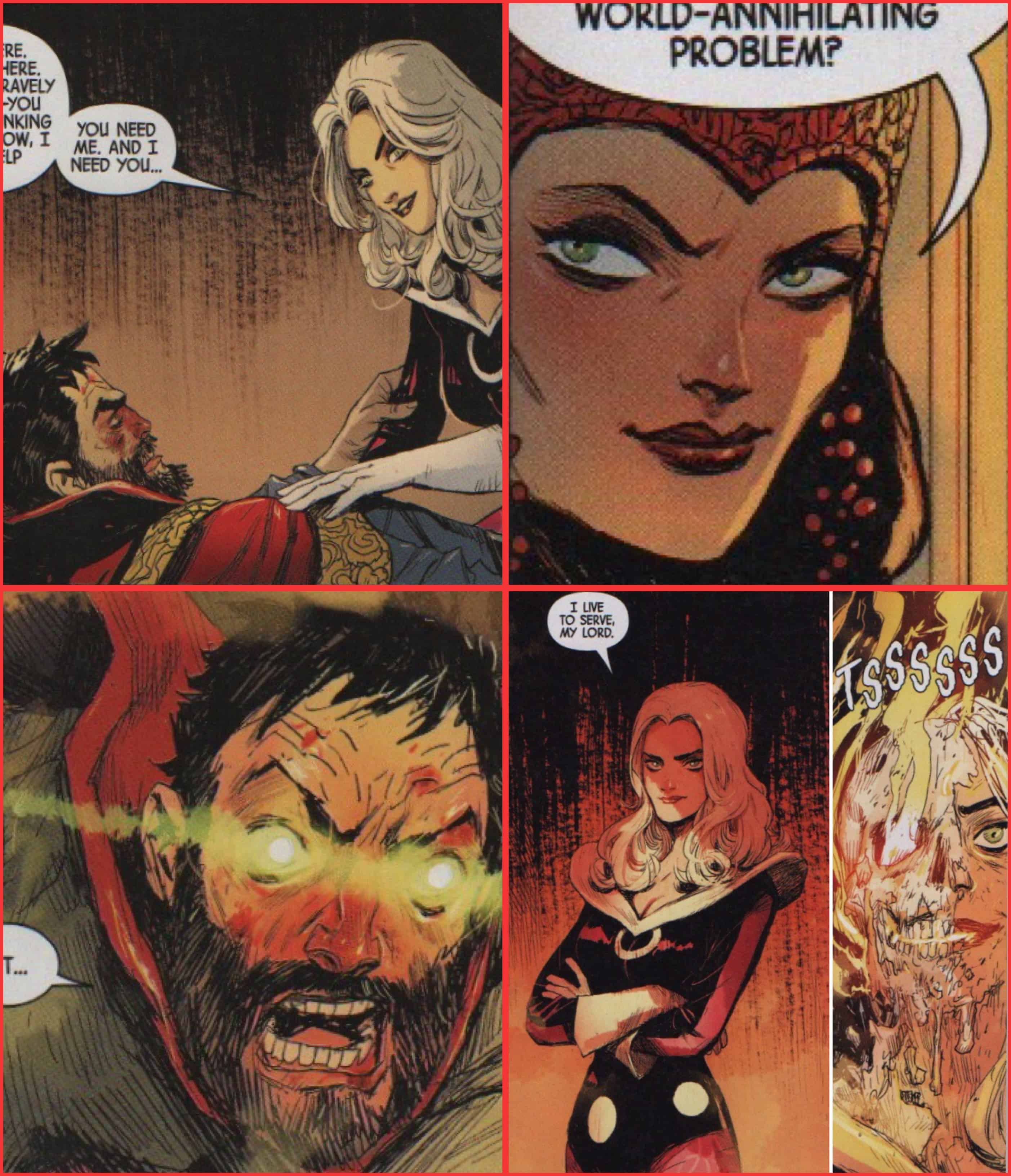 Donny must surely be a trickster god himself as even knowing things weren’t as they seemed I wasn’t 100% as to who was who here. Was Clea bewitched? Was Wanda being manipulated and the secret cause of all the glamouring from the outset? Had Loki been planning this all along? The fact he even reminded Strange he had warned him of this had me guessing it could have been him, especially when asking after Bats.

Final Thought: Champagne for my real friends and real pain for my sham friends. Who can you trust in Hell if you can’t trust a witch and the God of Lies?