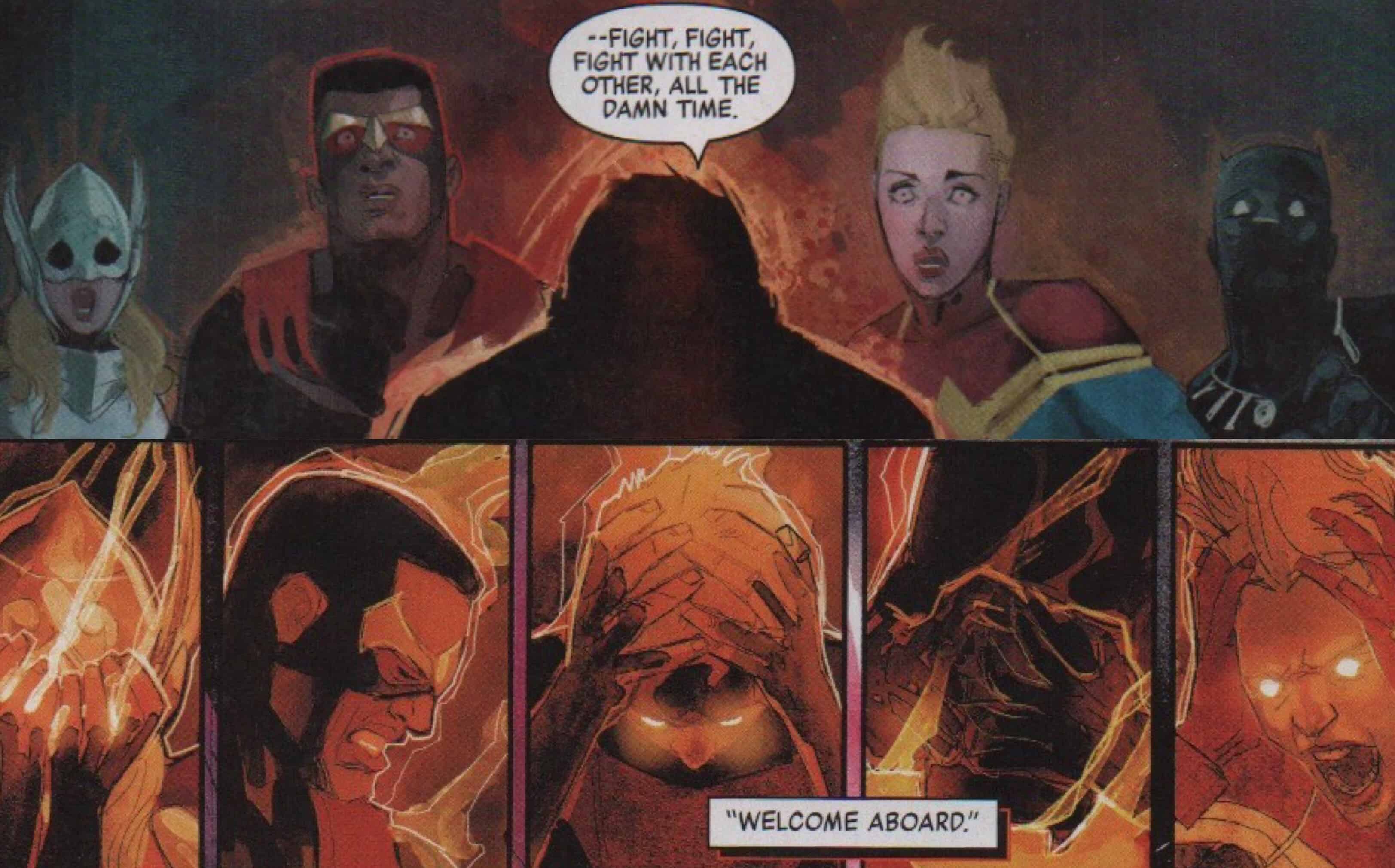 Fresh from his victory over Loki, Strange has decided for an encore to resurrect Las Vegas and return the many lost souls to life. 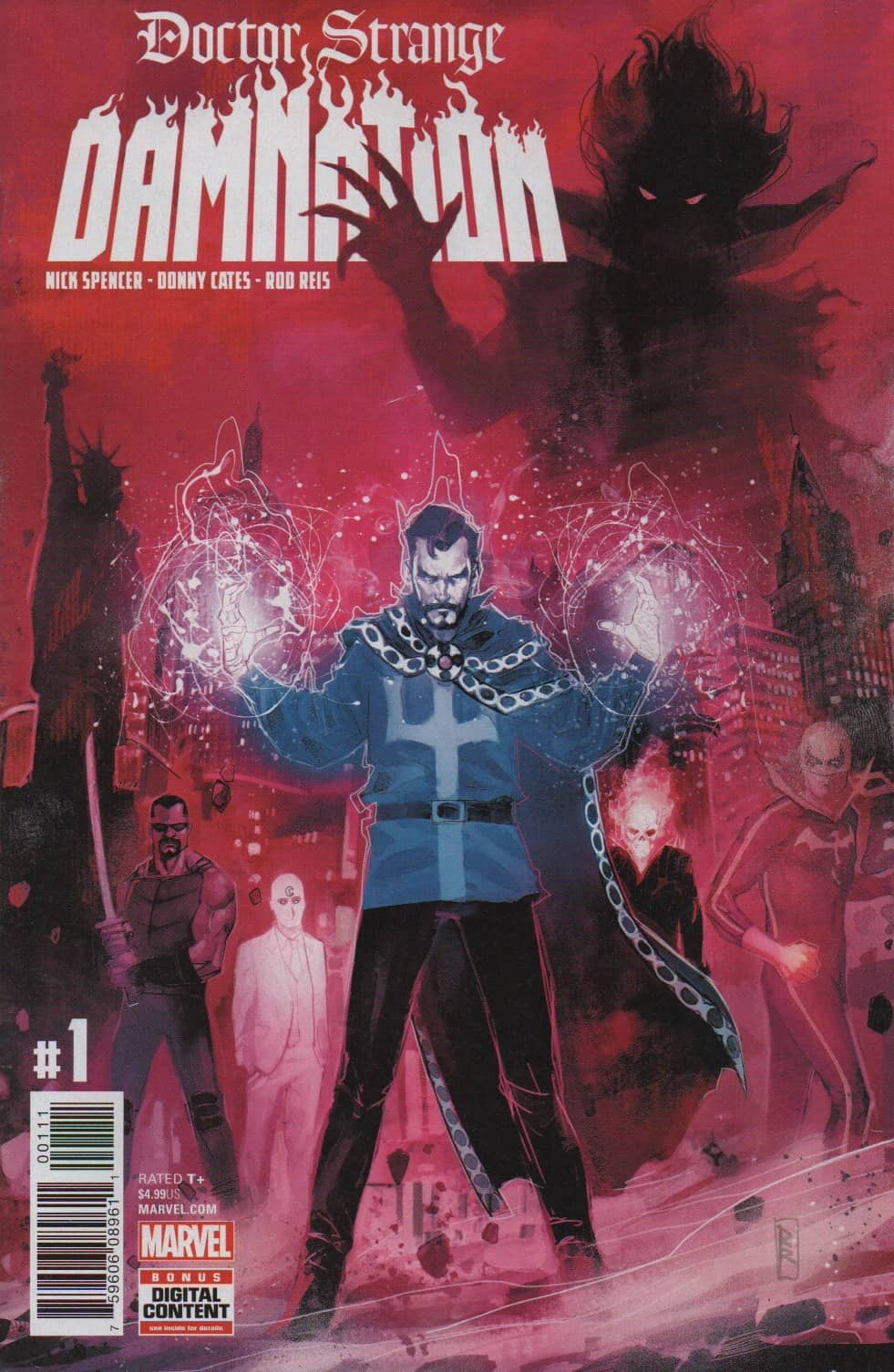 What You Need to Know:
The recent war with Hydra and a cosmically altered Captain America has taken its toll, with the destruction of the city of Las Vegas and the loss of many lives. In an unrelated event, Stephen Strange has reclaimed his mantle as Sorcerer Supreme and thanks to the meddling of Loki, magic has returned to Earth.

What You’ll Find Out:
At a televised memorial for the fallen denizens of Las Vegas (last seen destroyed in Secret Empire) Falcon is accompanied on a stage by Thor, Captain Marvel, Black Panther and Hawkeye. In the middle of making a vow that the assembled heroes will honor the lost by protecting the future, he is interrupted by Doctor Strange. Appearing out of nowhere and making a vow of his own, all attention focuses on him as he muses it’s time to try something different and with an awesome show of power resurrects the city of Las Vegas from the ruins. As those around him question his actions and the cost of the magic used he replies that the cost was worth it, as we see a reunited mother and son. His reveling in the outpouring of love and joy of many other such reunions is cut short, however, with an ominous rumbling and the darkening of the sky. The ground opens up beneath them and as everyone is sent crashing to the ground, Strange looks on in shock as a vast tower emerges from the split earth. A shadowy figure appears and heralds the arrival to the recently returned city of it’s latest attraction, The Hotel Inferno. As he launches into his sales patter the grinning ghoul hurls VIP tickets into the air like so much free candy. Picking up one of the many invitations Strange deflects a chiding from Sam and assures him he will deal with it as he strides off to face the new threat alone. 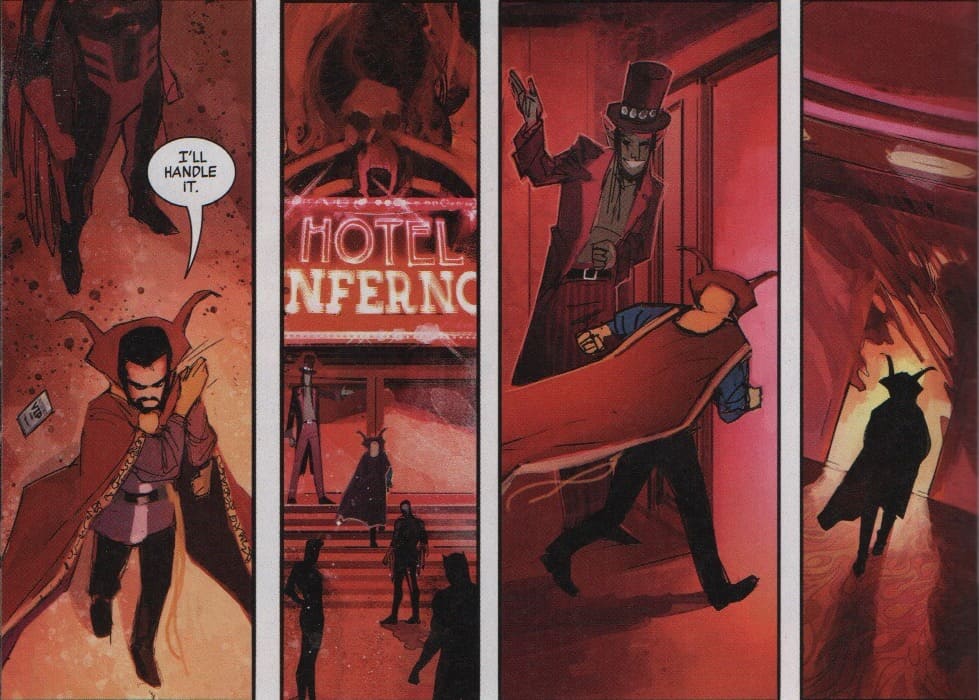 Entering a casino to encounter various villains playing games of chance, he catches the attention of a horned waitress and asks her where he is. Ignoring her offer of a drink he insists on answers brings him to the attention of security, in the form of an overly large demon he seems to recognize as Asmodeus. The demon doesn’t seem to like being recognized and tells him the boss wants to talk to him, which reveals to Strange that the culprit is exactly who he suspects of being behind the transformation. And so enters a suited and booted Mephisto, who sees Strange’s presence as one of endorsement and greets him with a smile. Strange has a different slant on things however and demands answers. Mephisto is mortified that Strange suspects him of foul play and playing innocent victim insists he is being maligned. As Strange remains skeptical, suggesting not only is he lying but possibly he even invented lying, Mephisto immediately goes out of his way to connive and convince him. 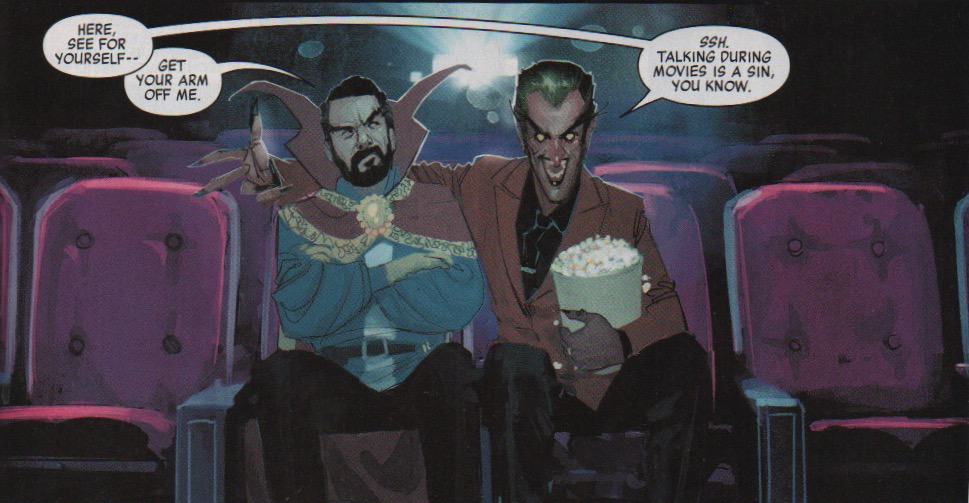 Mephisto launches into at a rather one-sided view of the arrival of Vegas in his domain and his attempt to welcome the new players. A pleasure which, after eons of torturing souls, made a nice change but was suddenly snatched away by recent events of Strange taking his toys away. Decrying his part in events he claims he isn’t happy with the state of things, not to mention the new arrivals.

Speaking of which, the heroes outside are watching from a rooftop, discussing the saga unfold below and what to do about it. Falcon informs the others he has tried to talk to the Mayor, who not only insisted he was confident in Strange but rubbing his hands together at the prospect of an increase in so many happy potential voters. As T’challa muses they must simply hope the streets stay quiet, Clint counters with his own doubts based on his own experiences in Vegas. As if to bear him out Sin City begins to show signs of living up to its name. 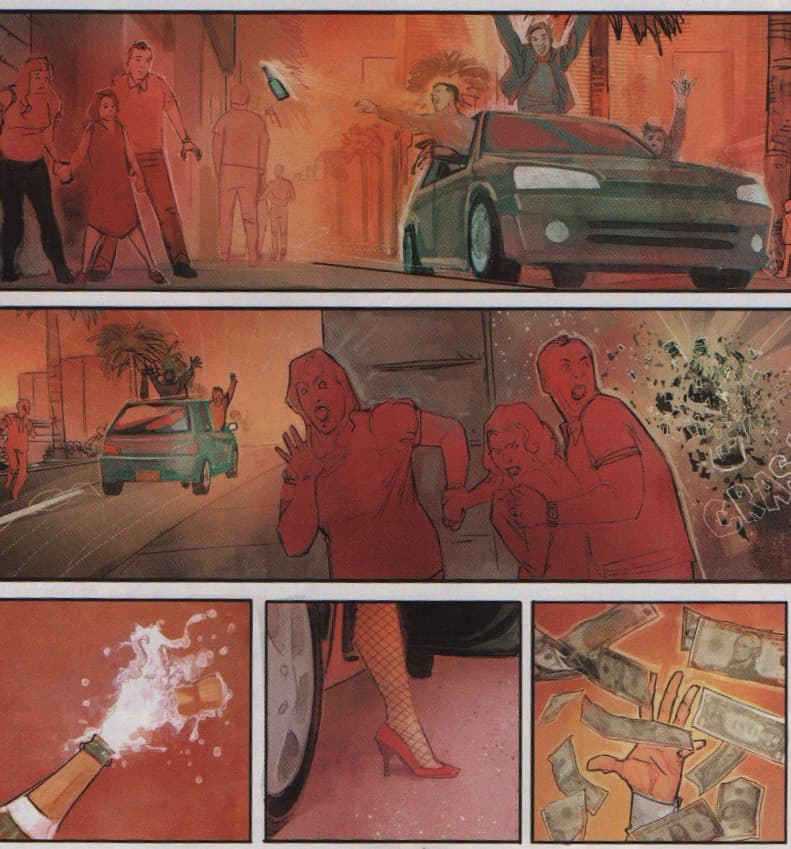 Mephisto watches from the window of his penthouse office and tells Strange maybe it isn’t so bad and he can work with it after all. As if to distract him from the goings on Mephisto takes Strange to his vaults, where he shows him he has acquired a considerable amount of wealth as the city above is beginning to heat up, literally. Demons are taking control and people are having to watch helplessly as loved ones burst into flame and melt in front of them. Meanwhile Strange inspects the piles of gold ingots and dollar bills and even as Mephisto smiles and offers him a bar to keep as a souvenir he notes something very bizarre. Each note and shiny bar of gold houses a trapped soul, screaming to be set free. In disgust, he points this out to Mephisto, who insists they all deserve it…mostly. Strange has had enough and demands Mephisto stop what he’s doing and return to his kingdom. Mephisto retorts that he IS in his kingdom and goes on to explain some home truths about the human condition and that he is merely serving a purpose. Strange argues that he is wrong and people won’t buy into it. Mephisto balks and asking if he means the heroes, casts doubt on their virtue and offers Strange a challenge in the form of a bet. Strange reminds him they have played this game before and Mephisto agrees that he is a creature of habit, but presses that to win the soul of the Sorcerer Supreme would give him endless cred with the other hell lords and that this is exactly what Strange is best at. Strange concedes and agrees to play along for the right to win the freedom of the trapped souls in Mephisto’s vault.

Things are turning ugly outside as Thor loses patience with the crowd. As Falcon attempts to dissuade her from direct action Jane shows her chagrin and goes on to accuse humans of never taking responsibility. Captain Marvel calls for calm and talks tactics, as Black Panther chimes in to raise the subject of the planetary shield. As the heroes begin to bicker and recriminate amongst themselves Hawkeye exhibits physical signs that alarm those around him and T’challa notices the gathered heroes all seem to be going through a transformation. Back in the casino Mephisto seems aware of the unfolding drama and deals a deck of cards and warns Strange about being overconfident. 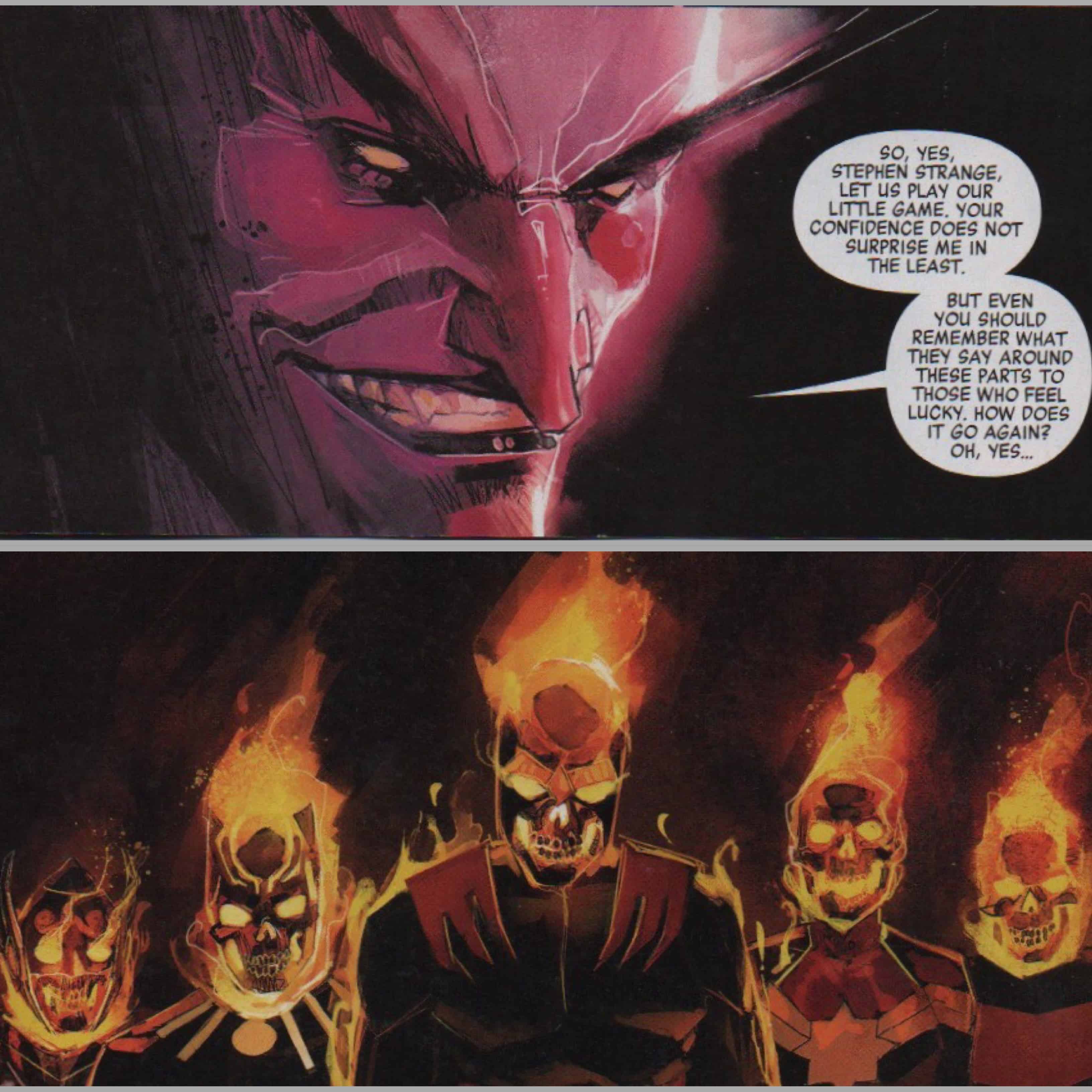 In an interesting epilogue, Wong is sat at home oblivious to the goings on, watching Jeopardy and investigates a scratching at the door to find Bats the Basset has made a house call. His declaration that he’s allergic and slamming the door falls on deaf ears as the ghost dog simply walks through the closed door and a brief exchange occurs on what is and isn’t considered rude. 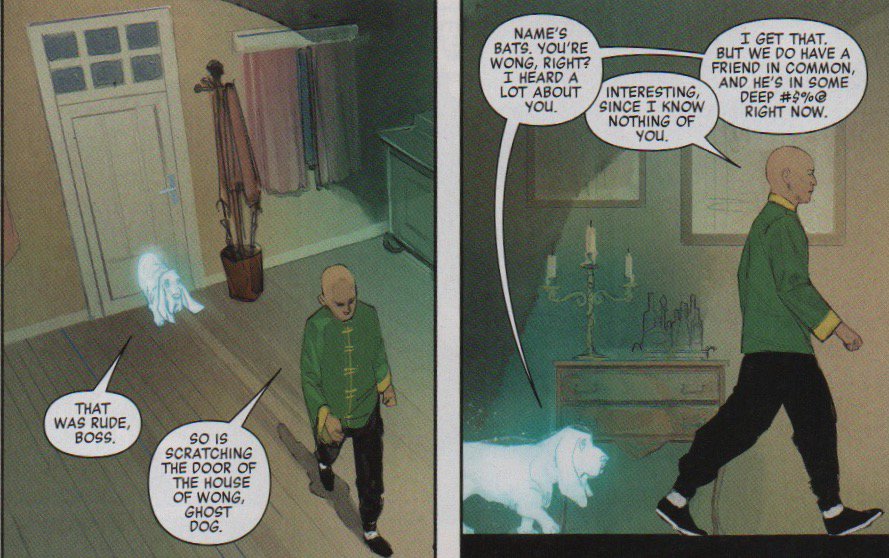 Bats implores Wong to help and when Wong makes it clear Strange doesn’t listen to him anymore he continues, informing him of what has happened to Vegas. Wong looks for himself, not via the news but a scrying pool in his cauldron. As Wong muses that Mephisto is too strong for them to face alone (Bats chiming in with a suggestion of the Hulk) he creates a spell summoning several champions, who not only have faced similar challenges before but are also themselves of a mystical or demonic nature. Enter the other players in this latest devilish crossover. 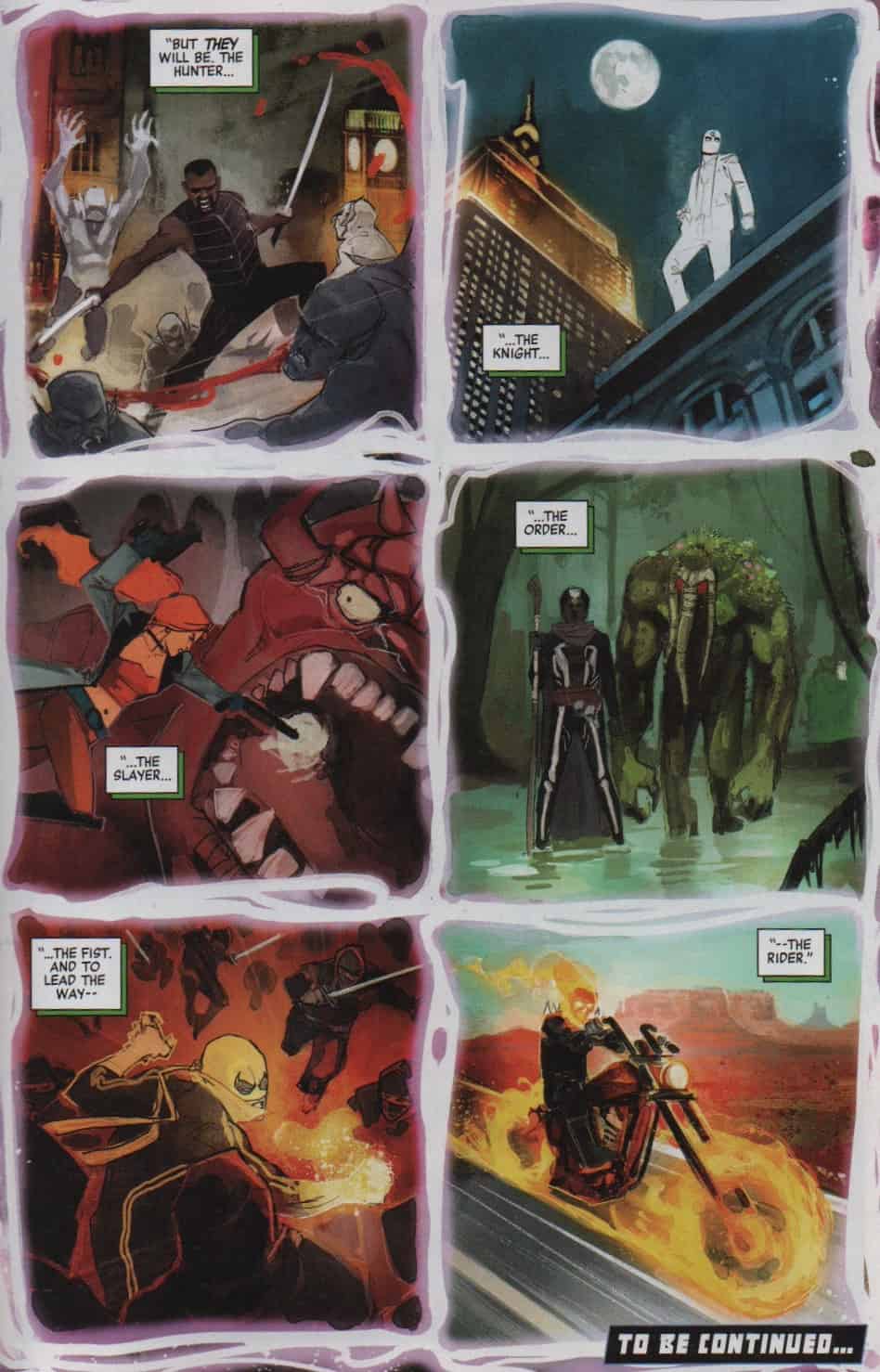 What Just Happened?
Just as Strange stole the limelight from Falcon, Mephisto shows how a true master does it with a prime bit of grandstanding of his own. His patter is deliciously wicked as he tells Strange of what has occurred and explains his role in the grand scheme of things. The choice of gambling for souls isn’t a new one of course and the casino of the undead was a recent backdrop for Hercules where we were witness to such delights as dead superheroes gambling to win the chance to return to the land of the living. Here the art is that much more ethereal, putting me in mind of Limbo as drawn by Sienkiewicz. Also, a very nice touch having Mephisto call his hotel Inferno. I wonder if someone with a “Pryor” claim will call copyright?

Wong’s reluctance to help here is a little contrary considering he just got done helping Strange in his battle with Loki. Maybe Sentry told him how their last meeting ended and he was taking his side. Loved the nod to Lockjaw here and Bats distracted by the TV. Maybe he can join the Pet Avengers??? PLEEEEEASE?

Unless Strange has a tick list he’s working on that we don’t know about, it comes out of left field that he decides to head straight to Vegas. Also, Strange’s decision to pull this stunt off at all comes off a tad random. Over in Amazing Spider-Man, as recently as #795, we just had Peter tell Loki (before losing the mantle of Sorcerer Supreme obviously) that Strange always warns of the cost of magic and would never be so reckless. Which also had an interesting parallel in that there was a little ‘One More Day’ reminder of Spider-Man’s own meeting with Mephisto. Characters going off script though is a small price to pay for this event to unfold. Dual writing duties work very well here, with Spencer and Cates different styles, we clearly get two separate voices vying for power in Strange and Mephisto. Also having Reis on board for the return of Vegas is inspired given that he also was there for its destruction in Secret Empire lending a seamless segue into this story.

Final Thought:
As quick as the introduction to this latest crossover is, it delivers a grand opening and the overture is unmistakable. The deck is shuffled. All the pieces are on the board. Let the games begin.