Wong and the Midnight Sons face off against the Ghost Avengers and a possessed Strange. The stakes are the very souls of all Las Vegas…and possibly the world! 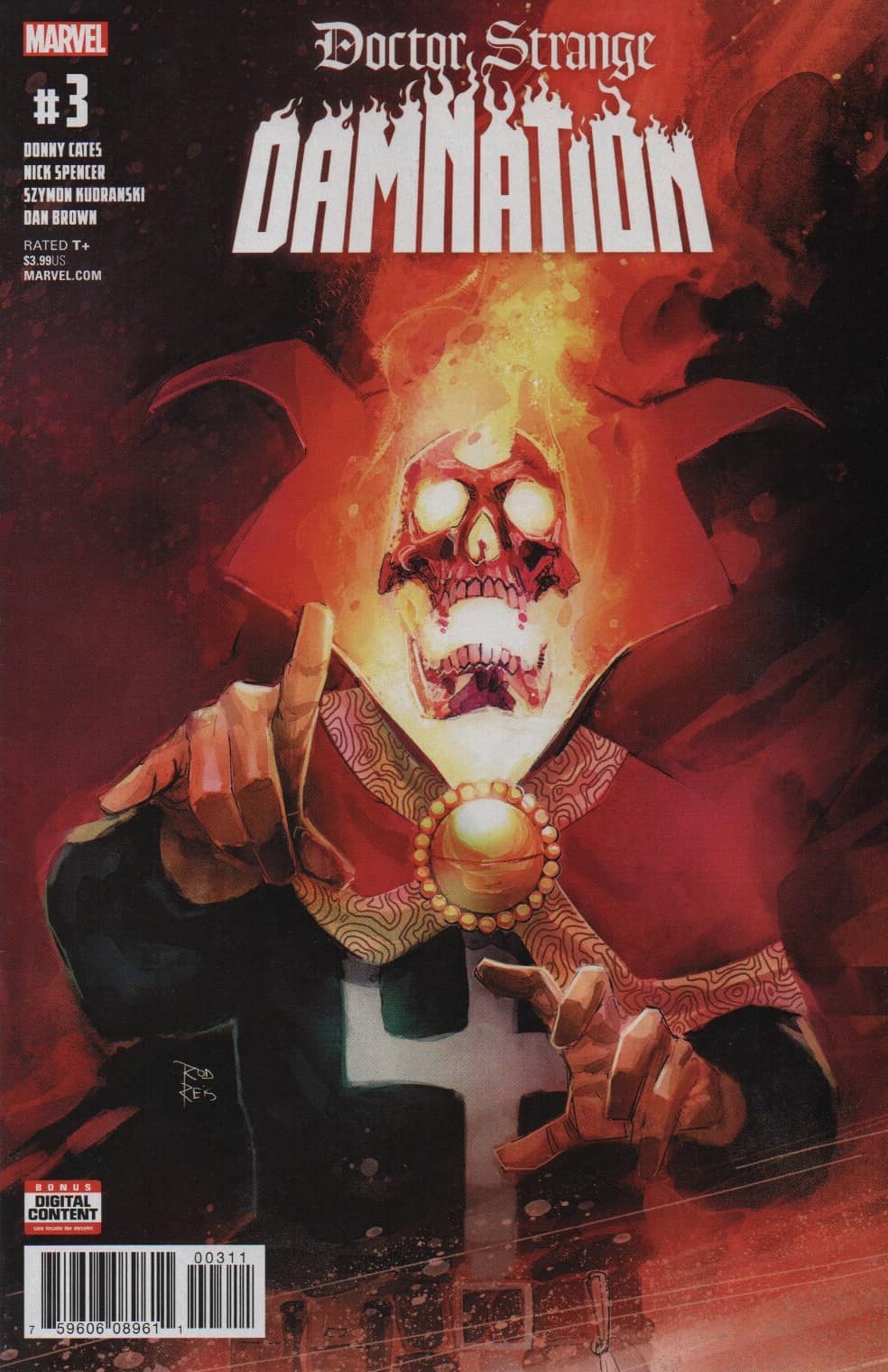 After losing to Mephisto at cards Strange is brutally punished by a possessed Thor. Wong mounts a rescue attempt and assembles a squad of Midnight Sons who, due to their very nature he believes are uniquely qualified and capable of themselves avoiding possession. Arriving in Vegas and confronted with the possessed Avengers he leaves his allies to distract them and sets off to find Stephen. Their number is further depleted by having Blade fall under the hammer of Thor, however, a new arrival swells their ranks in the form of Ben Reilly, The Scarlet Spider. Meanwhile, Wong has come face to face with Doctor Strange and it isn’t looking at all good.

What You’ll Find Out:
We rewind back to Wong giving himself a pep talk and being interrupted by Johnny Blaze, before heading the meeting with the Midnight Sons to discuss the situation. Despite Wong’s doubts, Johnny reminds him he can sense what Mephisto is doing and if the demon succeeds in his takeover and gets as far as L.A. the whole planet is doomed and so assures Wong he trusts him. 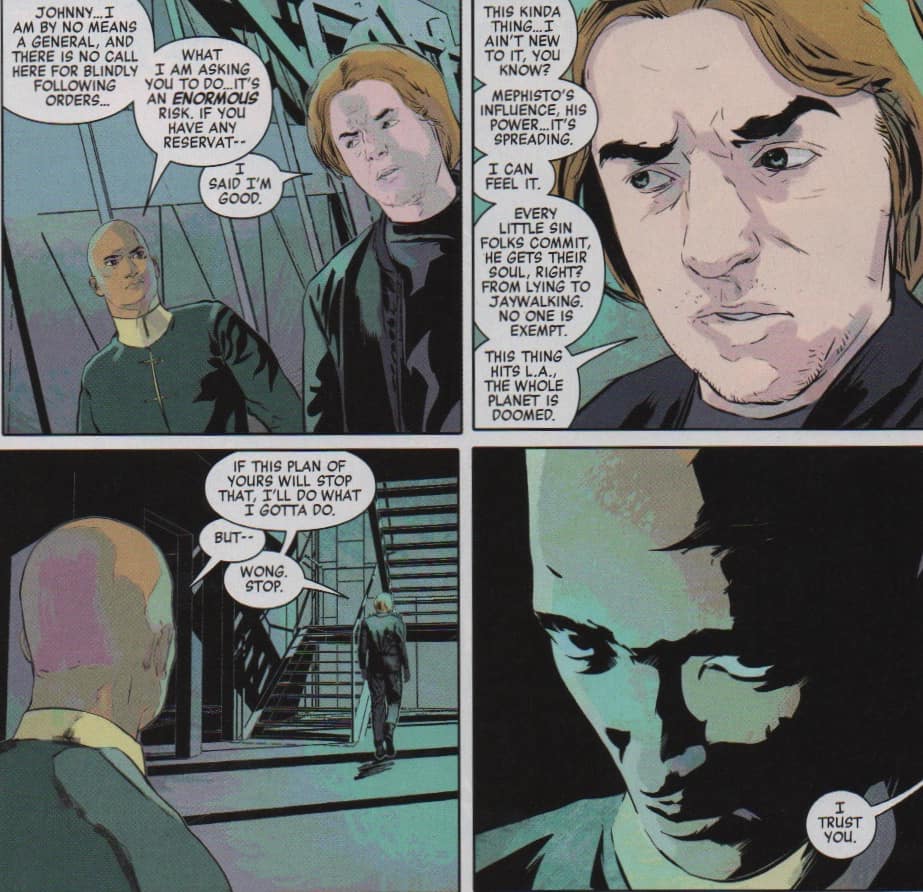 Cut to where we left our team and their attempt to deal with the problem of Blade pinned by the mystic might of Mjölnir. As Man-Thing secretes a pain blocker to help the vampire killer, Brother Voodoo attempts to stop the flames. Moon Knight offers to help and Jericho quips that unless he is deemed worthy then no, he can’t. Moon Knight posits that of all the personalities in his head he believes one of them must surely be worthy. Ghost Rider tells him to stop messing about, Blade needs a doctor. Which brings us to… 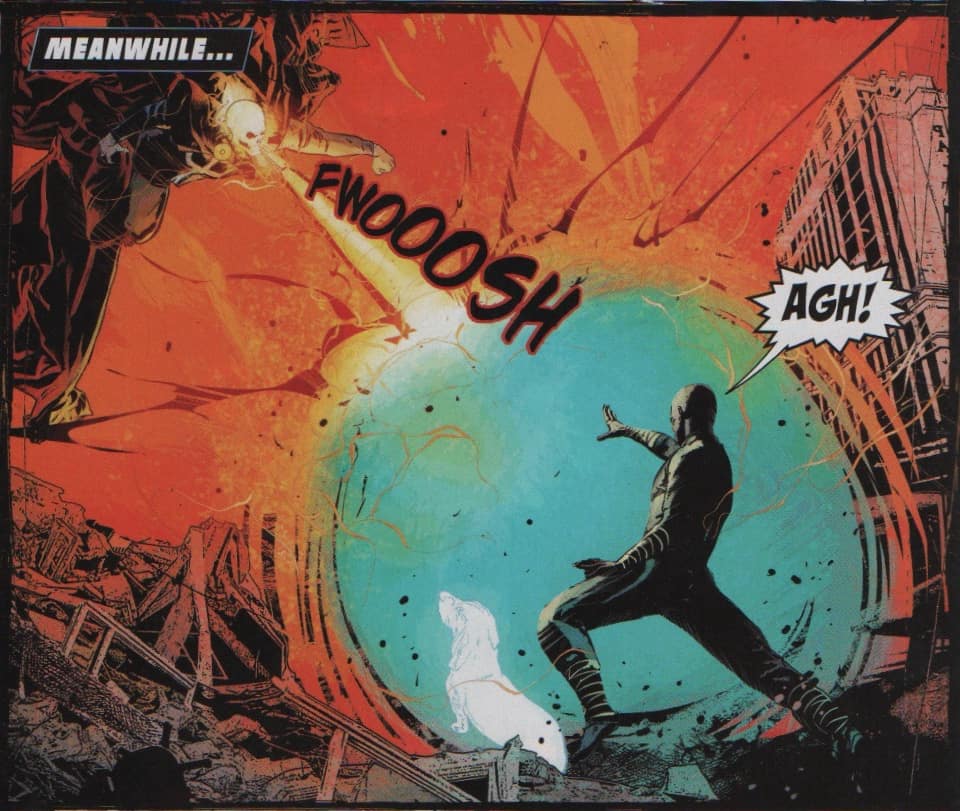 The not-so-good Doctor is in the house and is making things difficult for Wong. Bats suggests they try to talk Strange round, believing he is in there somewhere. But Wong isn’t so sure that he is. As the possessed Strange grabs Wong by the throat and begins to deliver a Penance Stare, Bats implores him not to be so soulless and in so doing has himself a lightbulb moment. Suddenly just when all seems lost the tide shifts and Bats voice emanates from the flaming skull in front of Wong. Once Wong gets over his shock and how odd it is to be saying “good boy” to Bats while looking at his former master he asks how long he can hold him. Bats is unsure, declaring it to be a mess and rather painful. Wong reminds him it isn’t over and to do his best. 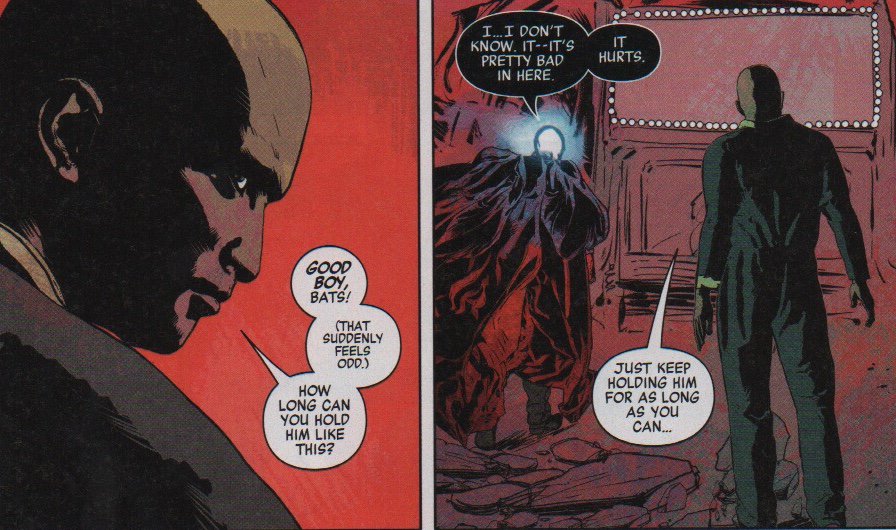 Moon Knight meanwhile has clearly gotten delusions of grandeur and is attempting to lift Thor’s hammer while Scarlet Spider tells them all they have to move. Elsa manages to critique his dress sense at the same time as refusing to leave Blade behind and ALSO refute Knights claim he can feel the hammer budge. Both Knight and Elsa are almost convinced though, when it does begin moving, that it is down to him, when in fact it’s Thor redeeming her hammer as she calls the Ghost Avengers to assemble. As Elsa returns Knight to reality she realizes in her trademark potty mouth style that Thor is making it rain blood. Also, Iron Fist notices that Blade is no longer down, just in time to see him leap to attack Thor, driving his sword home.

Thanking her for the blood rain he beats a hasty retreat leaving her with a parting gift of his own as his sword is set to explode, but all to no avail. Just in time Wong arrives and is in the process of explaining that the possessed Strange is now re-possessed by Bats when Blade interrupts in true Blade style and the Midnight Sons rally to the cause to finish the job at hand. Wong again doubts the wisdom of his plan and as each of his team picks a target he instructs Ghost Rider to make his move (apparently part of the plan they were discussing at the start of the issue). But Black Panther is having none of it, throwing him off his bike and doing his own Penance Stare, which clearly has no effect at all. Ghost Rider resorts to some below the belt tactics and leaves him with more than wounded pride, as he mounts his bike again and roars into action performing what must be one of his most daring stunts to date. 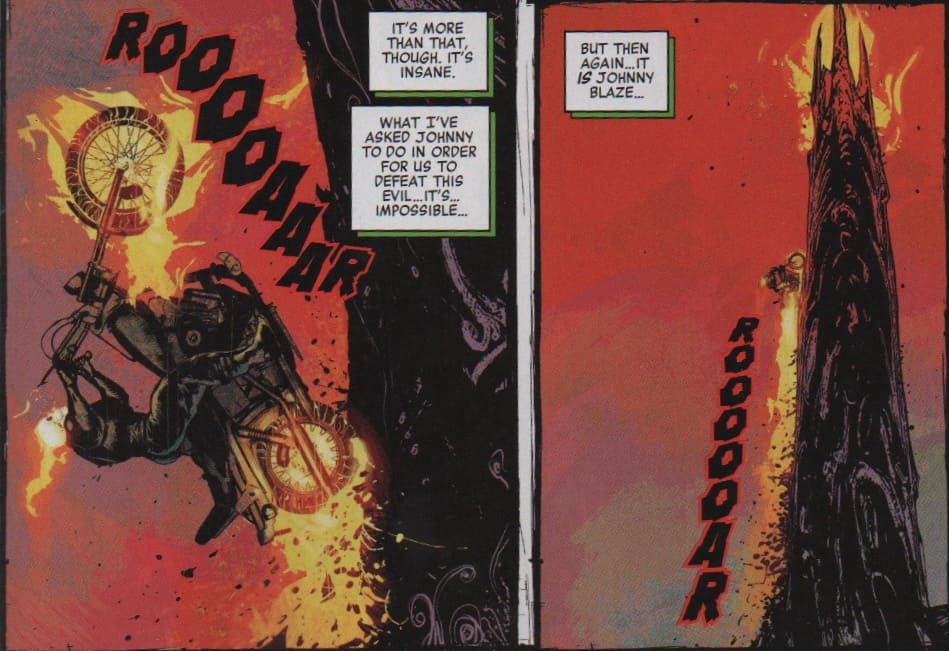 As Ghost Rider comes crashing through the window to face Mephisto our dapper demon sits coolly drinking and makes it clear he is totally unimpressed. Ghost Rider retorts that their face off has been a long time coming and as he proceeds to demand they end this once and for all, Mephisto does just that. With a wave of his hand and a breath of air, he blows out the infernal flame surrounding the former Ghost Rider. As Johnny’s shocked countenance is revealed he asks what Mephisto has done. Mephisto replies he has lifted his curse once and for all and when the all too human Johnny asks why his reply comes in the form of a brutal kick through the wall of the tower and a swift fall down to earth. He isn’t conscious however to hear Mephisto say… 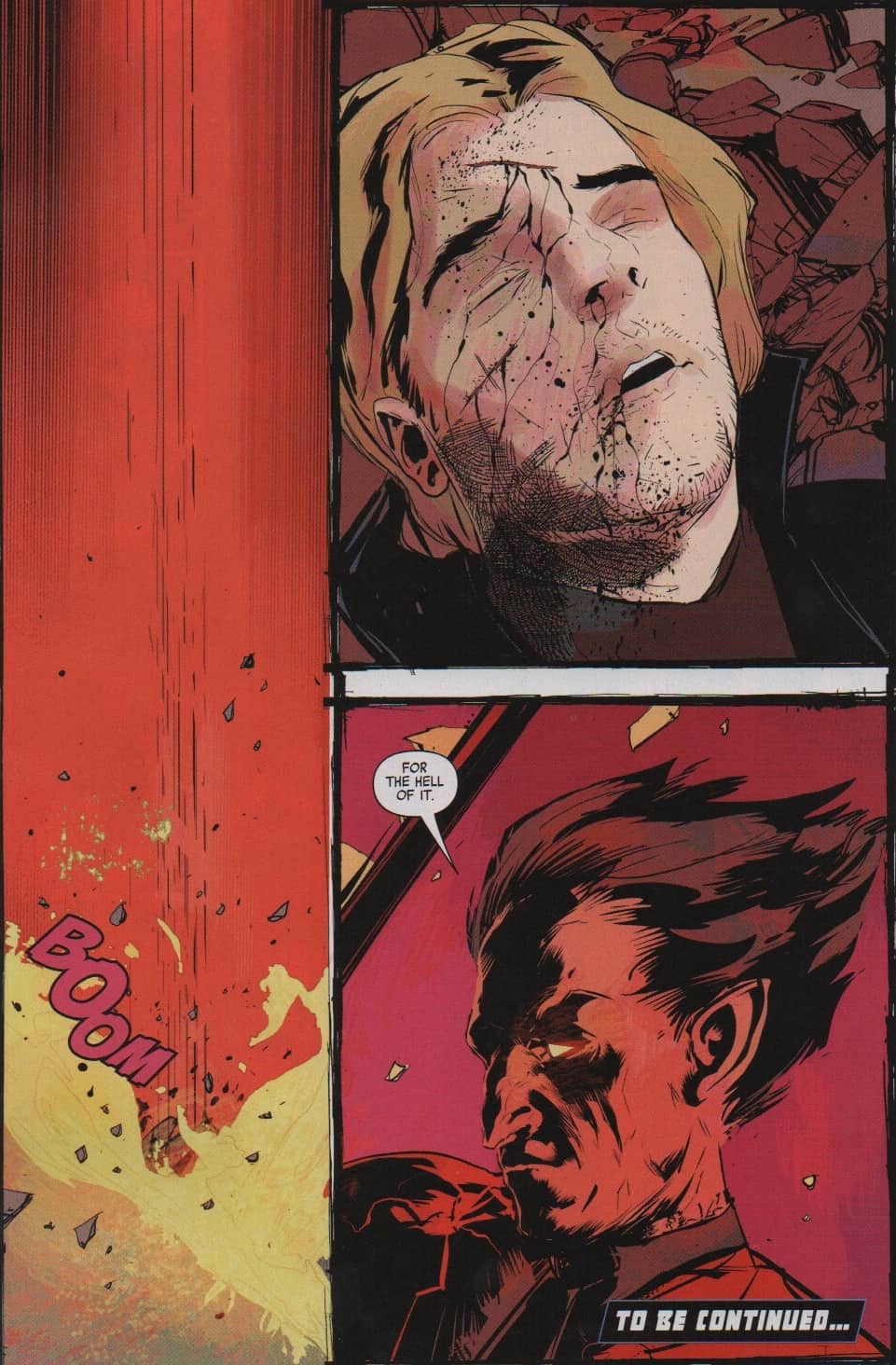 What Just Happened?
So, to the Dramatis Personae, or Monster Squad…love it!!! Blade delivers. And how! He is as curt and surly as always, cutting through the chatter and getting to the point, both verbally with Wong and literally when it comes to Thor. OUCH. The sight of Strange shooting and also vomiting fire at Wong, who barely manages to shield himself is, dare I say, flaming awesome. Some down and dirty fighting here from all concerned, with everything to play for. As well, Bats reveling in the glory that is opposable thumbs is a sight not to be missed.

Note the panel where we see Iron Fist face off against Hawkeye, this doesn’t end well for him (for the fate of Danny Rand be sure to pick up Iron Fist #78) And I wonder if Storm has been talking to Ghost Rider and suggested that well-placed kick to Black Panther there? Speaking of whom, that surely looks to be the most fun he’s had in years, careening up Inferno Tower. Shame it is cut all too short as he comes face to face with Mephisto only to be dealt with in so offhand and brutal a fashion, leaving him broken and bloody at the foot of the tower. 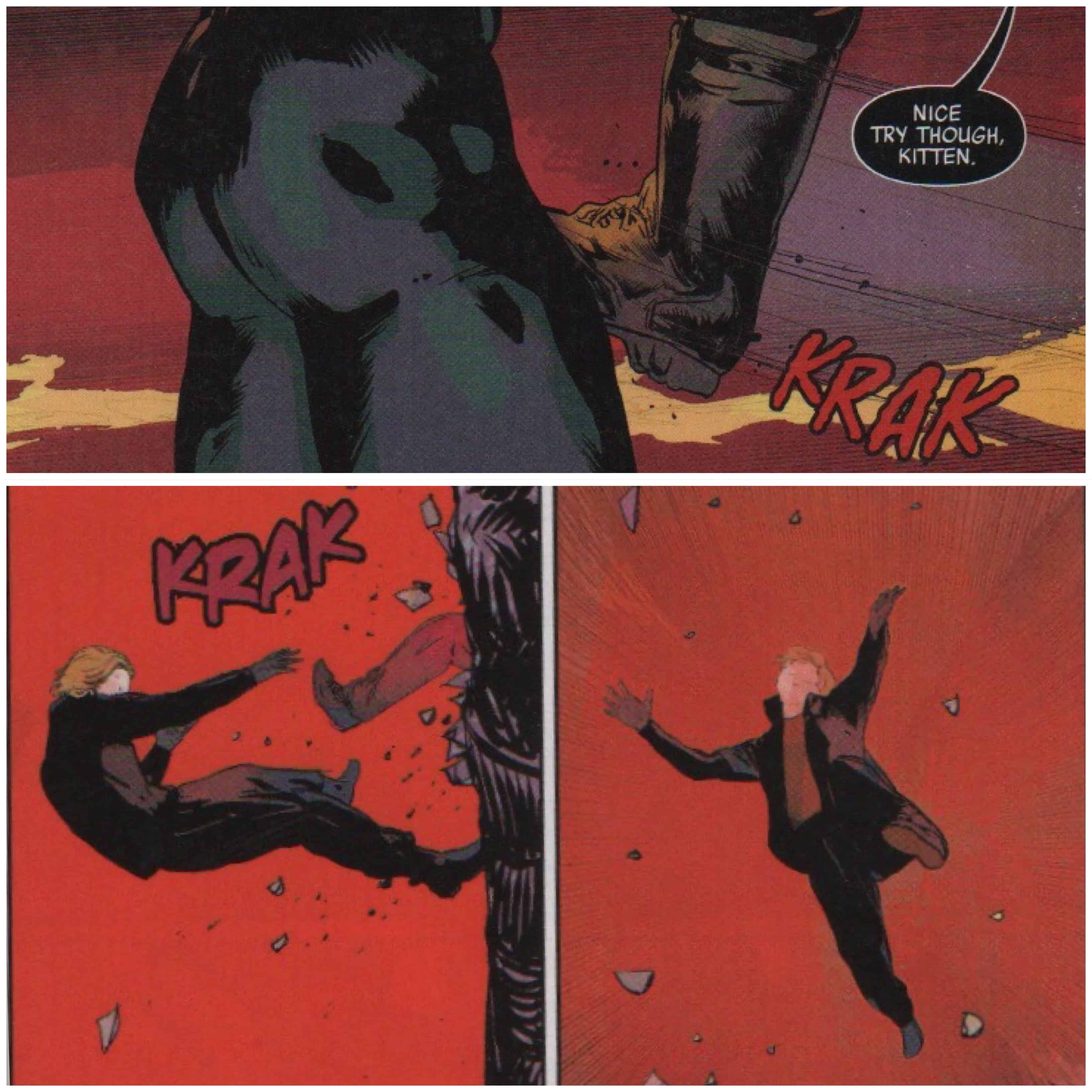 Speaking of brutal…YAY, we finally got swear emoticons from both Elsa and Blade. It’s like Travis Lanham heard me, many thanks, Travis. And Szymon Kudranski again showed his true talent here, from the determined expressions of the combatants, right down to the end shock on Johnny’s face. And I have to say having half the assembled combatants all flaming skulls (and two of them on the side of the Midnight Sons) could have been confusing but, no he managed to clarify perfectly well who was who and which characters to root for. No easy task I’m sure. As for the writing team, witty and shocking all at the same time as usual with so many twists and some great action. Having this line-up of characters working together is an inspired move and the dialogue is on fire. Hats off to Donny Cates and Nick Spencer. And the colors are always a perfect accompaniment as Dan Brown shows us in full glorious style just how hot Sin City can truly get.

Final Thought: Not long to go now until the grand finale and it’s all to play for as we enter the final round. Does the House always win? Let’s hope not…for all our sakes!