With Cave Carson in Retconn’s clutches, reality itself hangs in the balance. His cybernetic eye has collected heroes from far and wide and is bringing them to Final Heaven. It’s time for a final showdown between good and corporate greed. Will the Milk spoil everything? 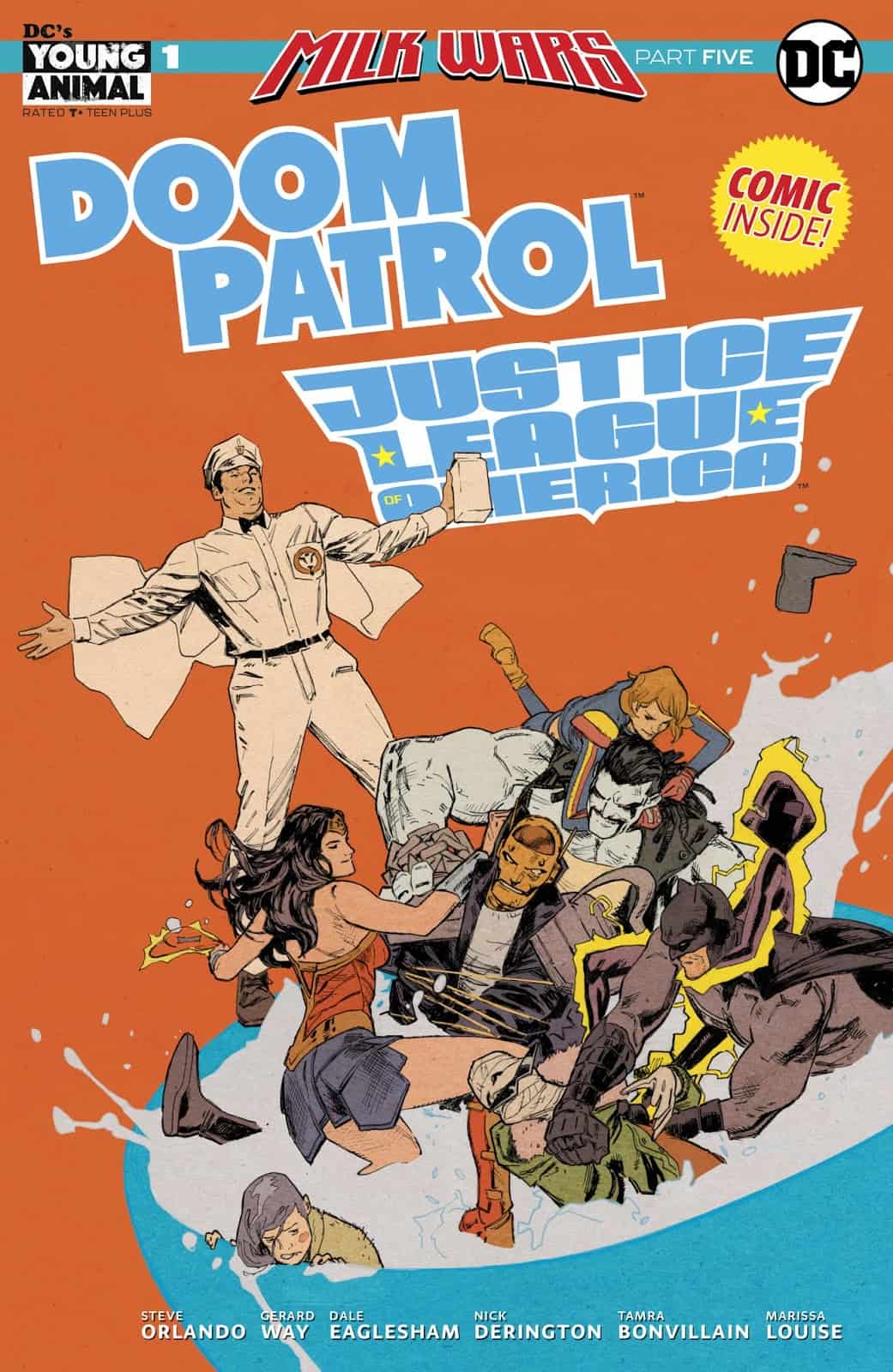 What You Need to Know:
Retconn, a shady group of realtors for reality itself has come to the DC Universe and are planning to sell it to Manga Khan. In an effort to make it more desirable, they use psychoactive milk to brainwash and make Earth Prime less weird. With the help of the Doom Patrol, Mother Panic, Shade the Changing Girl and Cave Carson’s cybernetic eye, Batman, Wonder Woman and the JLA are broken free from Retconn’s control, and head to Retconn’s main office in Final Heaven to set things back to normal, or back to weird depending on how you look at it. 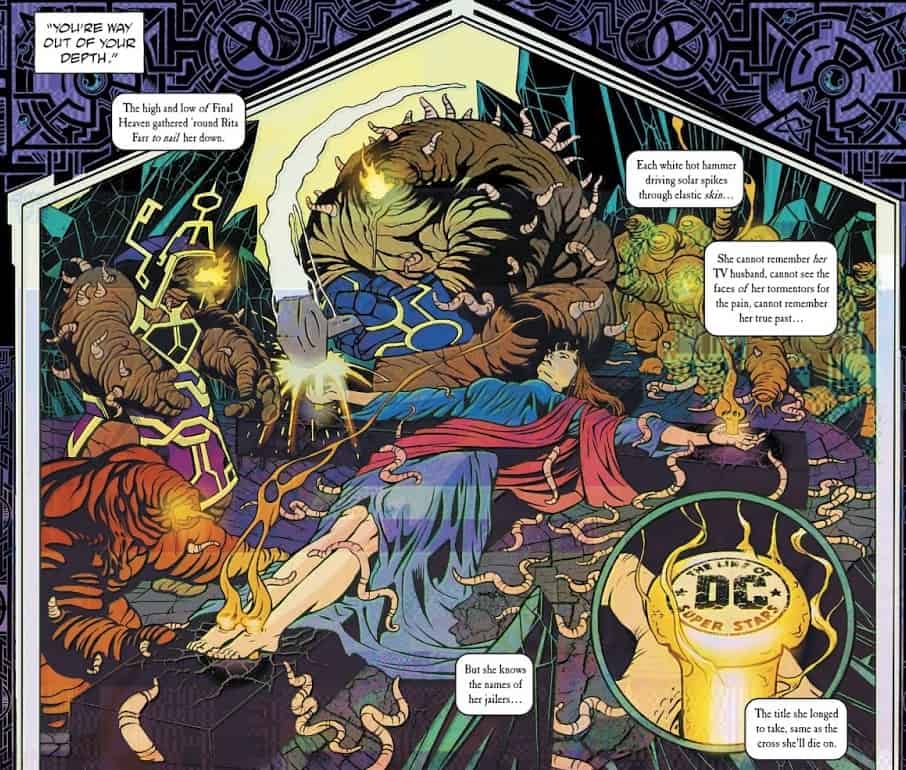 What You’ll Find Out:
We open on Rita Farr, an original Doom Patrol member, trapped in an artificial crucifixion fantasy world. She has been hinted at through all the previous issues, and somehow everything ties to her. Deeper in Retconn’s offices, Milkman Man is torturing Cave Carson. Cave gives him nothing, and suddenly his eye returns and all of the heroes from the previous specials burst forth. While they fight, the men running Retconn are trying desperately to sell Earth Prime to Manga Khan. Manga Khan says no, and they offer to give Earth to his buyer if they take care of the meddling heroes for them. Manga Khan makes the call and reveals that his buyer is Mr. Nebula, who promptly refuses the deal. Meanwhile, in the fight below, Casey Brinke talks her son Milkman Man down and makes him realize that Retconn was using him, while everyone else fights a milk slinging commando monster. After this heart to heart, they all head to the main office to stop Retconn. With no buyer left, the main Realtor decides that if they can’t sell Earth Prime, they’ll destroy it instead, and pushes a scary looking Jack Kirby-esque button. Reality begins to dissolve around them, and Batman convinces Flex Mentallo to use a power beyond his Muscle Mystery to save the universe. With Retconn no longer imprisoning her, Rita Farr stretches her body into everything, all of reality itself. With Flex and Crazy Jane’s help, Rita stops reality from breaking down and puts everyone back to where they were meant to be. In a flash of white, all of our heroes are returned to Happy Harbor at the original Justice League headquarters. Rita is with them, and somehow Cliff is no longer a robot. Everyone is happy and vaguely remembers what has happened, except for Casey Brinke. She feels the loss of her son, Milkman Man, but can’t exactly remember what has happened to him. 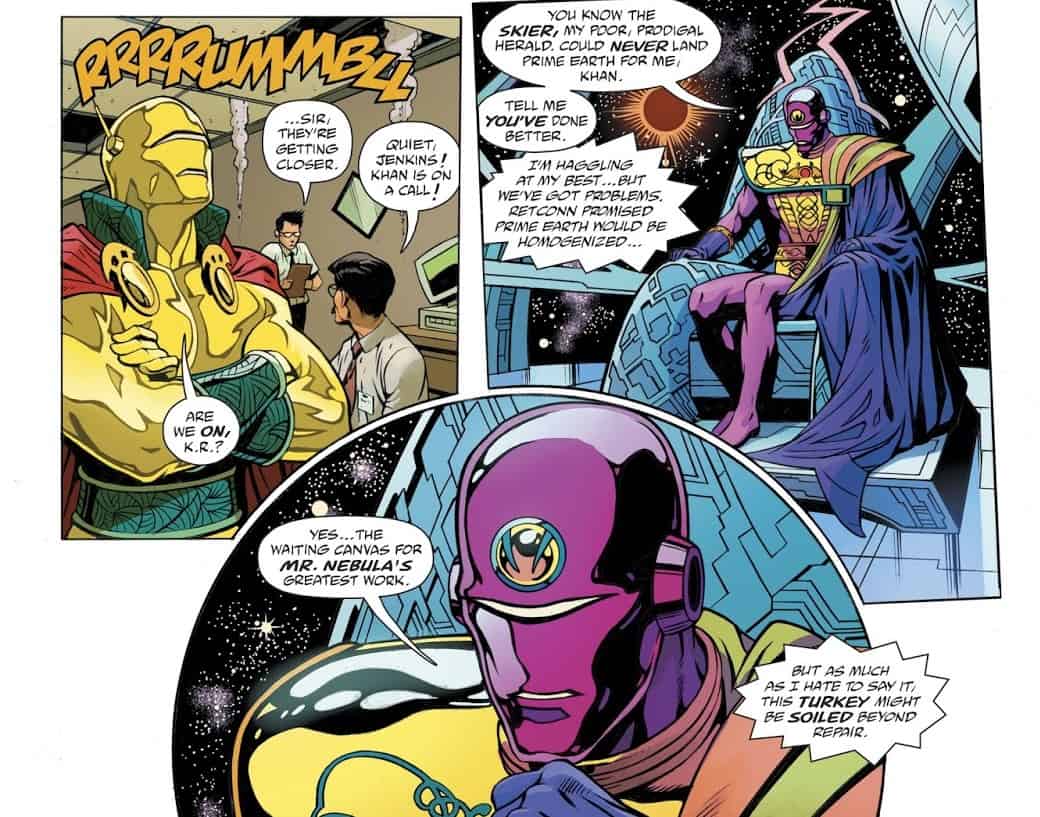 What Just Happened?
Overall, I really enjoyed this crossover. It was cool to have such a giant, reality-altering event that had real repercussions but didn’t scrap everything prior to this. I also really enjoyed the fact that all of these weird fringe DC Characters got to interact, which is something DC hasn’t really done since The Children’s Crusade way back in the heyday of Vertigo. This crossover and Young Animal, in general, has really captured the spirit of the glory days of the Vertigo imprint. 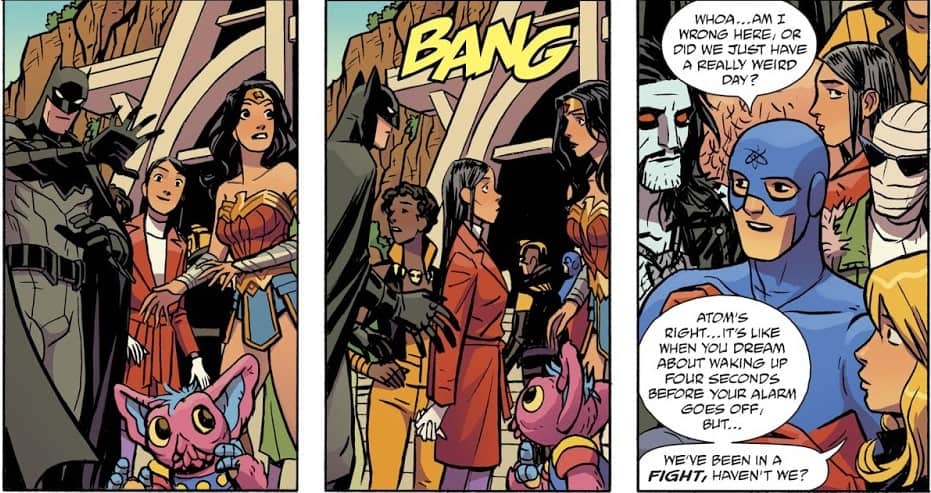 I’m a fan of the original Arnold Drake Doom Patrol, and it always bothered me a little that Elasti-Girl wasn’t around for the seminal Morrison run. The Doom Patrol run leading up to this by Way and this crossover especially feels like the perfect mix of the Silver Age weirdness and the modern Morrison cerebral qualities of Doom Patrol.

One of the coolest things about this issue is the art. Dale Eaglesham absolutely kills it on the pencils. That would be enough to really make the art pop, but they go one step further in this issue by letting the artists from each of the Young Animal titles draw a panel from their comic in their style, and by letting Nick Derrington do the art in the prologue. It’s a real treat to see Eaglesham draw these characters, but also a cool nod to the main artists.

Final Thoughts: The Milk Wars have been a wild and sometimes confusing ride, but this issue ties everything together beautifully. The perfect closer to a very fun event, full of twists and genuinely touching moments.