Doom Patrol Weight of the Worlds #1: Fitness ‘Till Death!

Doom Patrol Weight of the Worlds #1 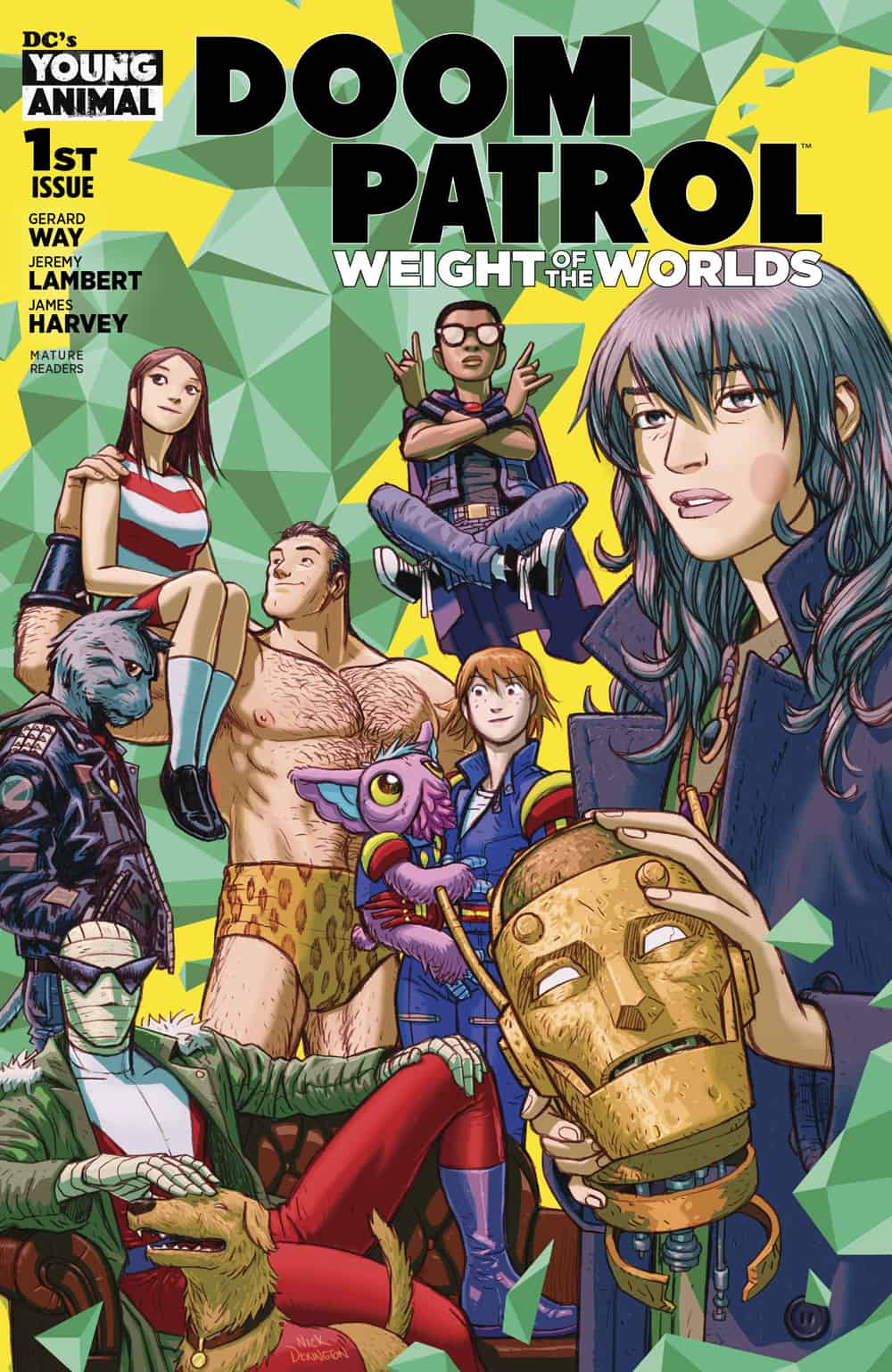 All hail the Supreme Shape! Gerard Way and the World's Strangest Superheroes return in an all-new series that takes them beyond the borders of time and space! Featuring artwork by acclaimed cartoonist James Harvey, this issue finds the Doom Patrol facing off against the fanatical fitness fiends of planet Orbius and the Marathon Eternal! Meanwhile, Cliff Steele, formerly known as Robotman, must come to terms with his new body of flesh and bone...yet the real test turns out to be something far more frightening: his mom.

Gerard Way’s wacky and zany interpretation of the classic misfit superhero group is back after last years ‘Milk Wars’ event, checking in on all of our favorite characters to see what’s next for the Doom Patrol. 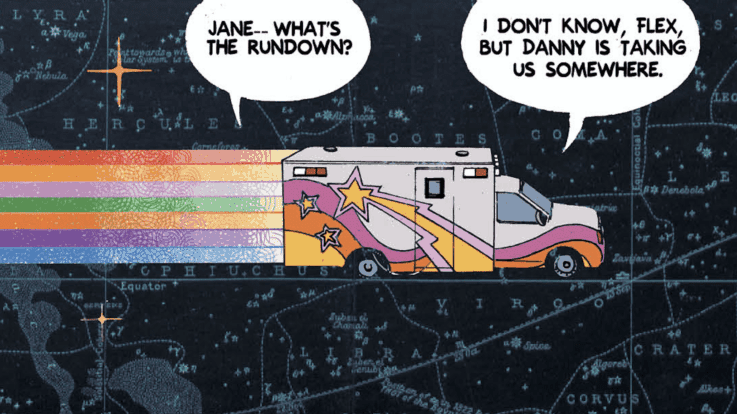 For those who have followed this iteration of the Doom Patrol since the Young Animal imprint’s debut issue in 2016, this story will be a welcome continuation to the outwardly whimsical run. For those just jumping in, things are going to look and feel very different than what you are used to. Gone is the sometimes bleak tone of Morrison’s famed run, having been replaced with a quirky sense of positivity that feels incredibly natural for this group of misplaced heroes.

Gerard Way brings a distinct voice to his stories that works distinctly well for character-driven teams who are a bit more on the wild side. The recent success of ‘Umbrella Academy’ is a testament to this ability, and he seems to bring this unique flair to the Doom Patrol rather effortlessly. The first issue in the Weight of the Worlds story brings all of the charm and awkwardness you could want, but it starts to feel convoluted as the story begins to take shape. There are a lot of character development moments that probably should have happened, but instead, we are thrown right into another outlandish story focused on an alien interpretation of societal body dysphoria. It’s a topic that feels right on brand for what Young Animal brings with its comics though, walking the increasingly thin line between imaginary and reality with just a hint of dark humor masked by an overcompensating sense of positivity.

The density of the issue and the story itself is something that is apparent from the initial pages. There are multiple callbacks to previous issues and for those who aren’t caught up to speed, it could be more than a little confusing. Cliff is a human? Danny is an ambulance? And why is there an anthropomorphic cat? While this is an ongoing issue with heavily character-driven stories such as this, if you can accept the book for what it is – which is more akin to issue #13 in Gerard Way’s Doom Patrol rather than just another #1 issue – there is a lot to be enjoyed. Pulling a God out of a hole isn’t even the craziest thing that happens. 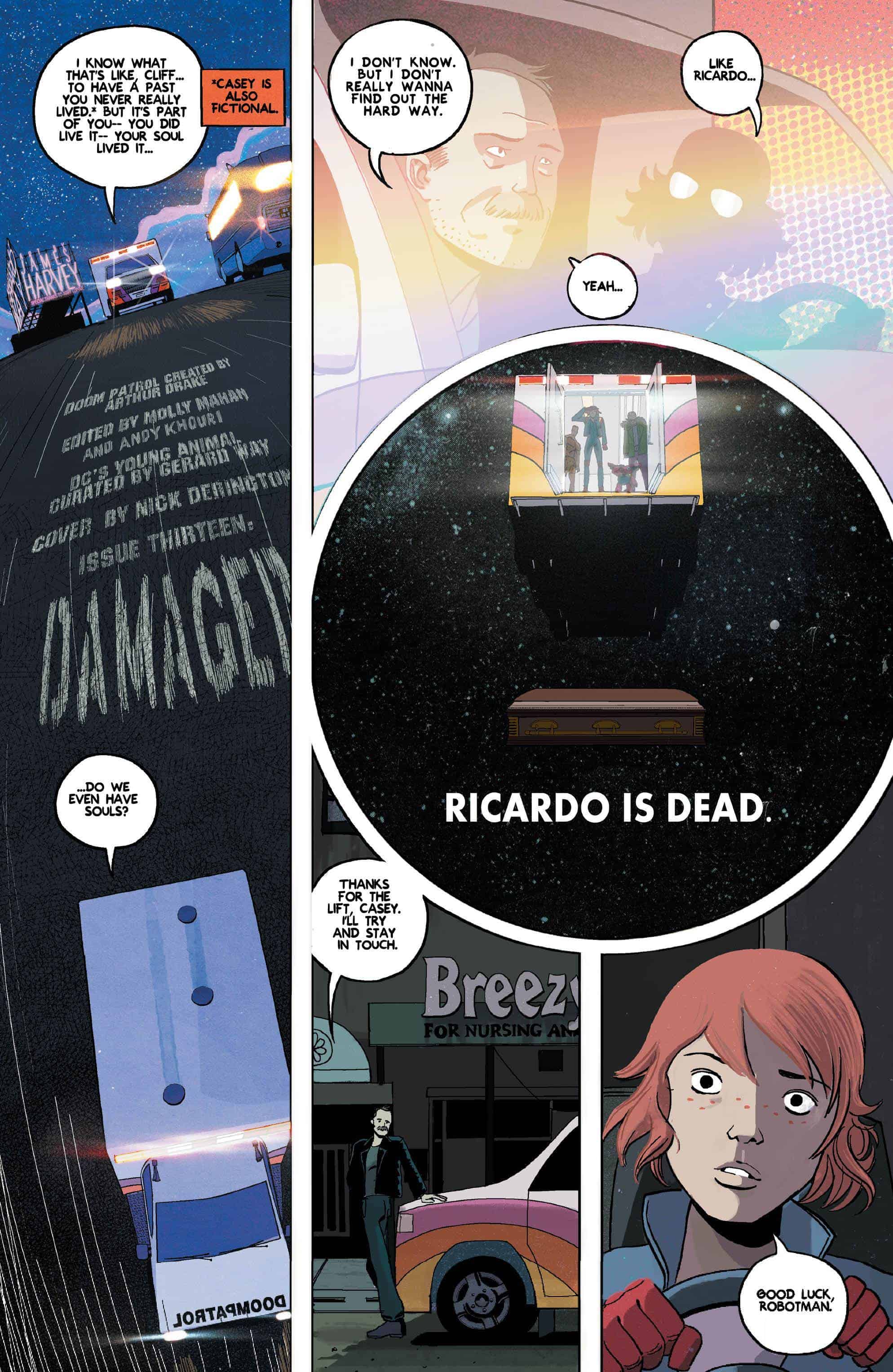 Sometimes there are runs that become so iconic and important to comic lore and the fandom in general they create standards and expectations that future creative teams simply must consider. Grant Morrison’s run on Doom Patrol is one of those runs. There are undoubtedly many fans who simply cannot accept a new interpretation or are unwilling to give a real chance to a book that does not channel exactly what Morrison delivered. That is just the reality of the situation. Doom Patrol Weight of the Worlds #1 is an offbeat and surreal comic with spectacular visuals, surprising twists and a positive spin…

But it is not Morrison’s Doom Patrol.

This difference might be too different for some fans, but it still strikes a chord that really resonates with me. The team of misfits can actually be relatable, and Gerard Way utilizes not just their circumstances, but their outlook on life to bring something entirely new to the table. That is what I appreciate most about this book and Young Animal as an imprint.

The one-shot nature of the story was a perfect introduction back into the lives of these characters as well, and it helps to setup a solid foundation for the overarching narrative. However the density of the information presented ultimately weighs down the emotional impact of these character’s journeys, especially in instances like the cliffhanger at the end. It was a truly impactful moment, but it was hindered by the steps that were taken to get us to that point. If we can get a more focused and sensible story going forward, truly great things are certainly in store!

Overall, the creative team behind Doom Patrol Weight of the Worlds #1 delivers a fundamentally well-executed issue despite a few missteps. And while it feels like a welcome return to form for their own interpretation, it could scare off potential newcomers with its outwardly zany positivity.

'Doom Patrol Weight of the Worlds #1' is a whimsical return to form for Gerard Way and company. With spectacular visuals, intricate plotting and a unique perspective of positivity, the return of Doom Patrol proves that DC's Young Animal pop-up imprint still has a lot to offer.

Doom Patrol Weight of the Worlds #1: Fitness ‘Till Death!