Doomsday Clock #11: A Fistful of Strings 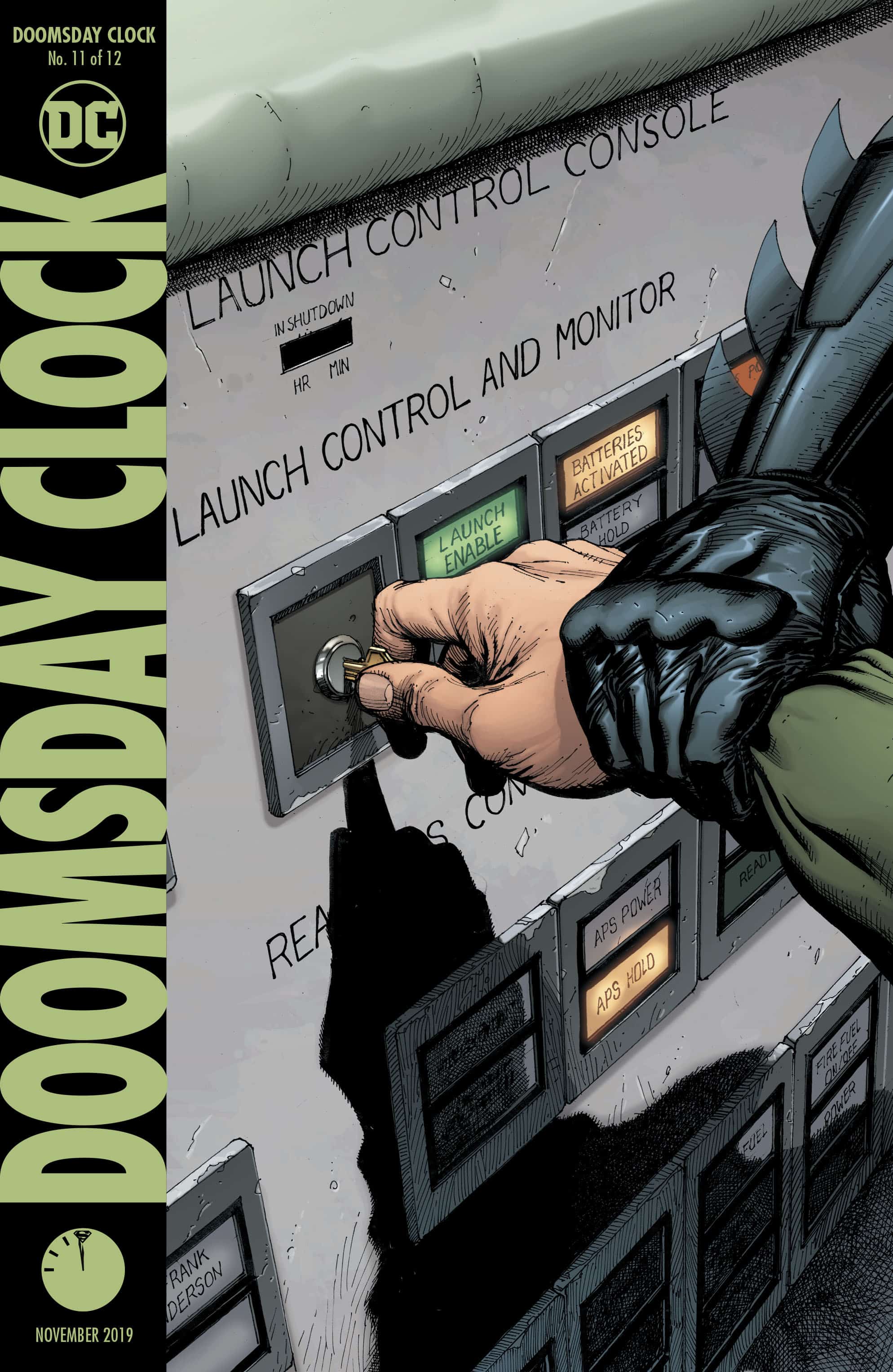 The critically acclaimed series by the renowned team of writer Geoff Johns and artist Gary Frank marches toward its conclusion. In this penultimate issue, the truth behind “Rebirth” is revealed as Batman searches for the one person he believes can help him save the world…Rorschach! 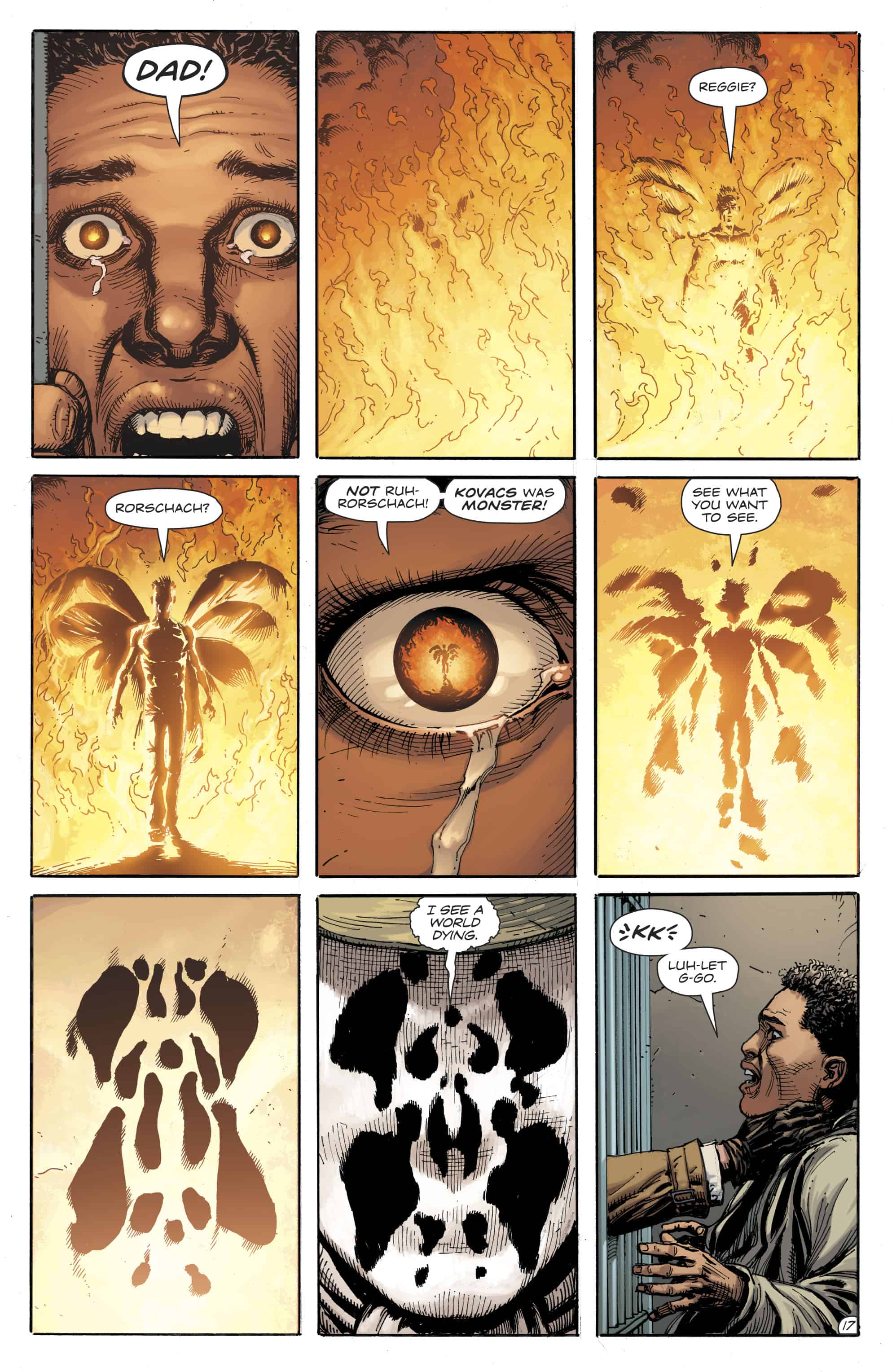 After a three-month wait, Doomsday Clock #11 is finally in our hands with no certain timetable as to when the over-sized finale will arrive. Given the wait time for this issue, there seems to be some understandable backlash as to what this particular issue brings to the table. Obviously the art from Gary Frank is immaculate as usual but in a tale that is set to upend everything we know about the DC Universe for generations to come, the content—the driving force of the series—seems somewhat lacking in this chapter. But is that a problem or just the nature of a maxiseries such as this? 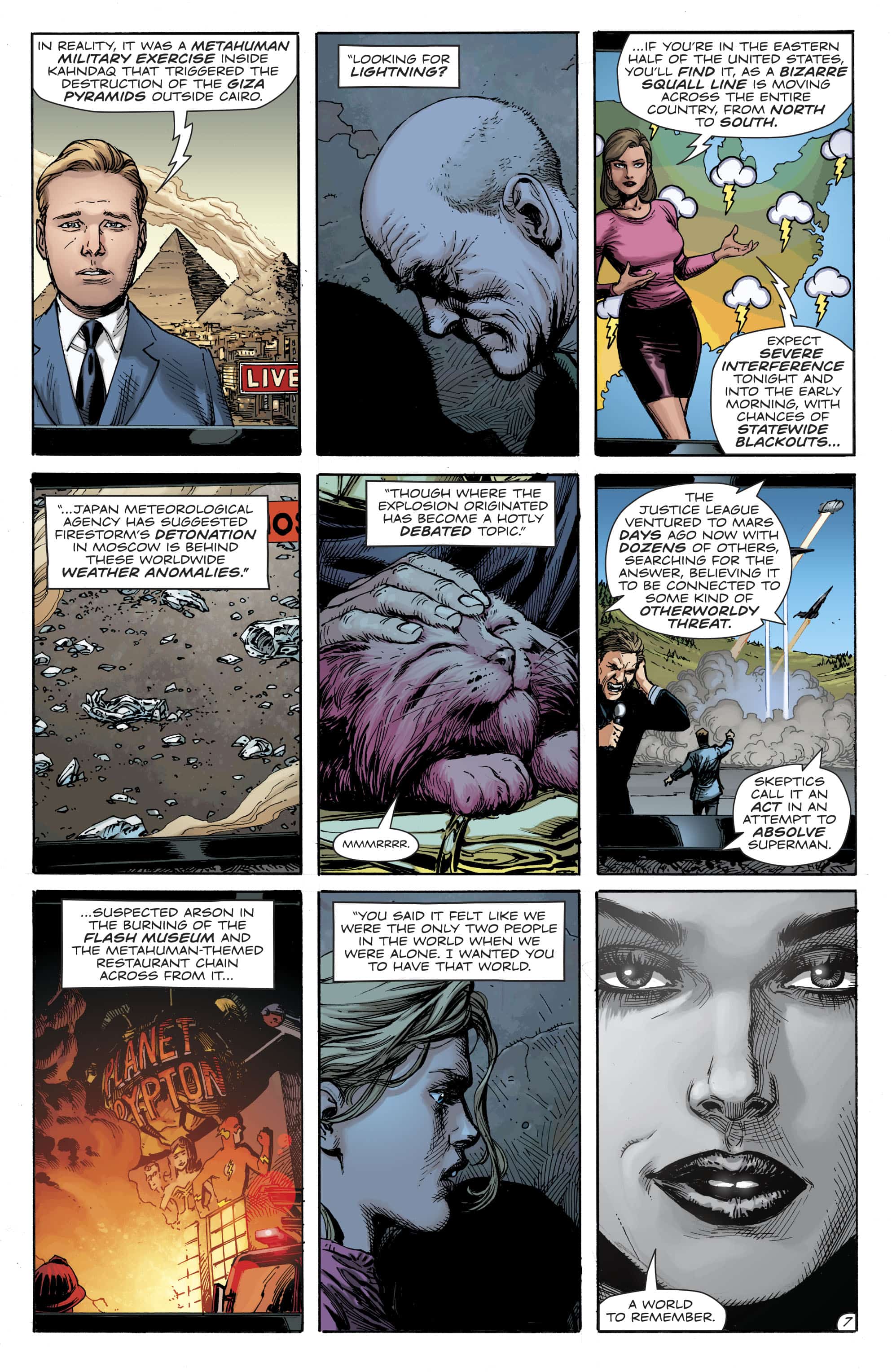 When moving through the Doomsday Clock narrative, one finds a story that is constantly reinventing itself. We began with the adventures of Marionette and Mime, then moved forward into the tensions between the US and Russia regarding The Supermen Theory. The heroes confronted Doc Manhattan on Mars and we learned more about the underpinnings of the Multiverse than had ever been considered before. Issue #11 is where all of these disparate threads and several more are brought together—gathered like strands of string in a closed fist—waiting to either be woven into something beautiful or perhaps only to be slashed and discarded in the end.

Watchmen is often described as a deconstruction of the SUPERHERO, and rightfully so. Moore takes all of the traditional superhero tropes throughout the work and dissects them with the grace of a medical examiner working on a post-mortem body. In the era of the Cold War, as the clock inched closer to oblivion, what need was there for hope and idealism in the face of a stark reality? That was Moore’s project, or so it seems to many, and Johns’ project, with its direct ties, seemed primed for something similar, and in many ways it is. Johns’ subject is not the SUPERHERO, but the superhero GENRE. At just over 80 years old, the comics superhero genre was due its day in court. By uniting the connective tissue between Watchmen and the greater DC Universe, Johns takes that same scalpel Moore used and begins looking for the roots of the genre, from countless retcons to the trouble of having continuously contemporaneous heroes move across a world that ages much quicker than the heroes themselves. In doing so, I would like to argue that Johns positions Doc Manhattan as a stand-in for The Reader. 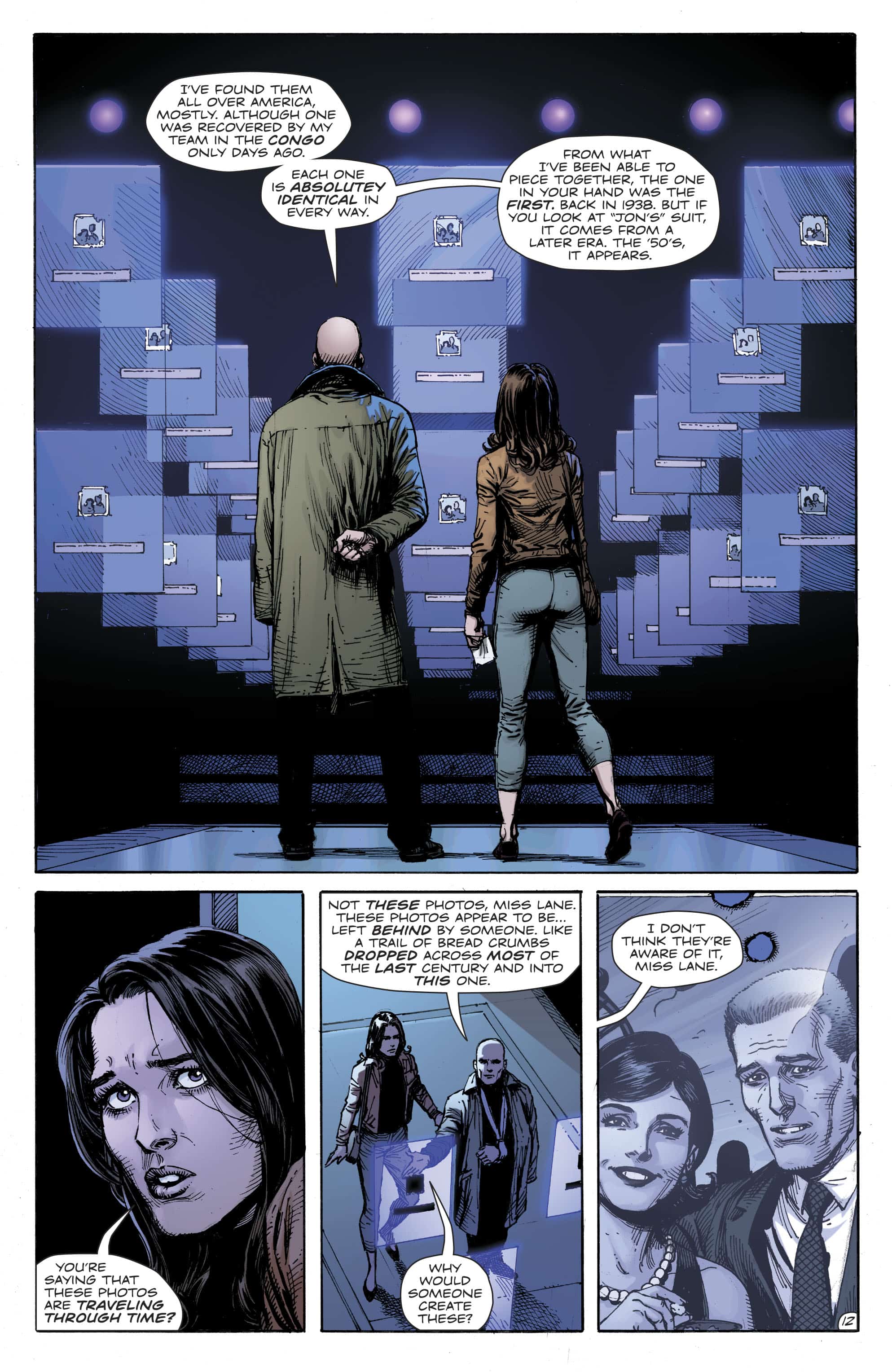 While we, the readers, squabble over tiny bits of continuity and when such and such character’s origin was changed, so too is The Reader standing amidst this Metaverse trying to figure it out. Move an origin here and what happens to the rest of the structure? Will anybody notice is Metropolis migrates from one region to another? What is the impact of these heroes back then versus these heroes in a contemporary setting? All of these vital questions The Reader is asking (and actually enacting) serve as an analogy for the readers navigating the comics industry and its history.

Of note here is that the first person on Earth 0 that Doc Manhattan encounters is Coleman Carver, an eerily familiar tale of an actor who struggles in the industry until one iconic role breaks him into the limelight only to be viciously murdered. On the day that Action Comics #1 debuted on our world, and that Superman first appeared (for the first time) on Earth 0, The Reader meets, essentially, George Reeves, the man who would one day become the first live-action depiction of Superman in Adventures of Superman in 1952. Each of the photographs that Lex has collected can be traced to a crucial moment in comics history in our world, the largest single clue throughout this series that Johns is not merely crafting a comic book story here but is writing the textbook for how we move forward with comics. And the statement he is making, as I read it, is that at the center of everything is The Reader.

Much has been made about how this story will relate to the greater DC Universe moving forward and very few clues have really been given on this point so far but this issue offers one of the biggest clues thus far. We see Ozymandias in conversation with Saturn Girl (of the Legion of Super-Heroes for the newer readers). As the story goes, three core members of the Legion travelled to the past to meet with the man who would eventually ensure that there was a future—the inspiration for the Legion in the 30th / 31st century—a young Clark Kent. In this scene, as Saturn Girl assures Ozymandias that Superman will save the future, Ozymandias questions whether Superman will remember having met her, which we know he does not, causing her to fade away. The future is uncertain. Things are playing out differently this time as we have already seen in the pages of Brian Michael Bendis’ Superman. But as she fades, her Legion Flight Ring remains. On the back cover of the book, what previously had seemed like blood flowing in from the top of the page is revealed to be Superman’s cape. To quote a fellow reviewer, Matt Meyer, I would submit these two articles as evidence of “a subtle nod from Johns that the hope and optimism of Rebirth will be fulfilled.” The future is uncertain but the lines drawn from the events in Doomsday Clock appear to be more direct than ever before. 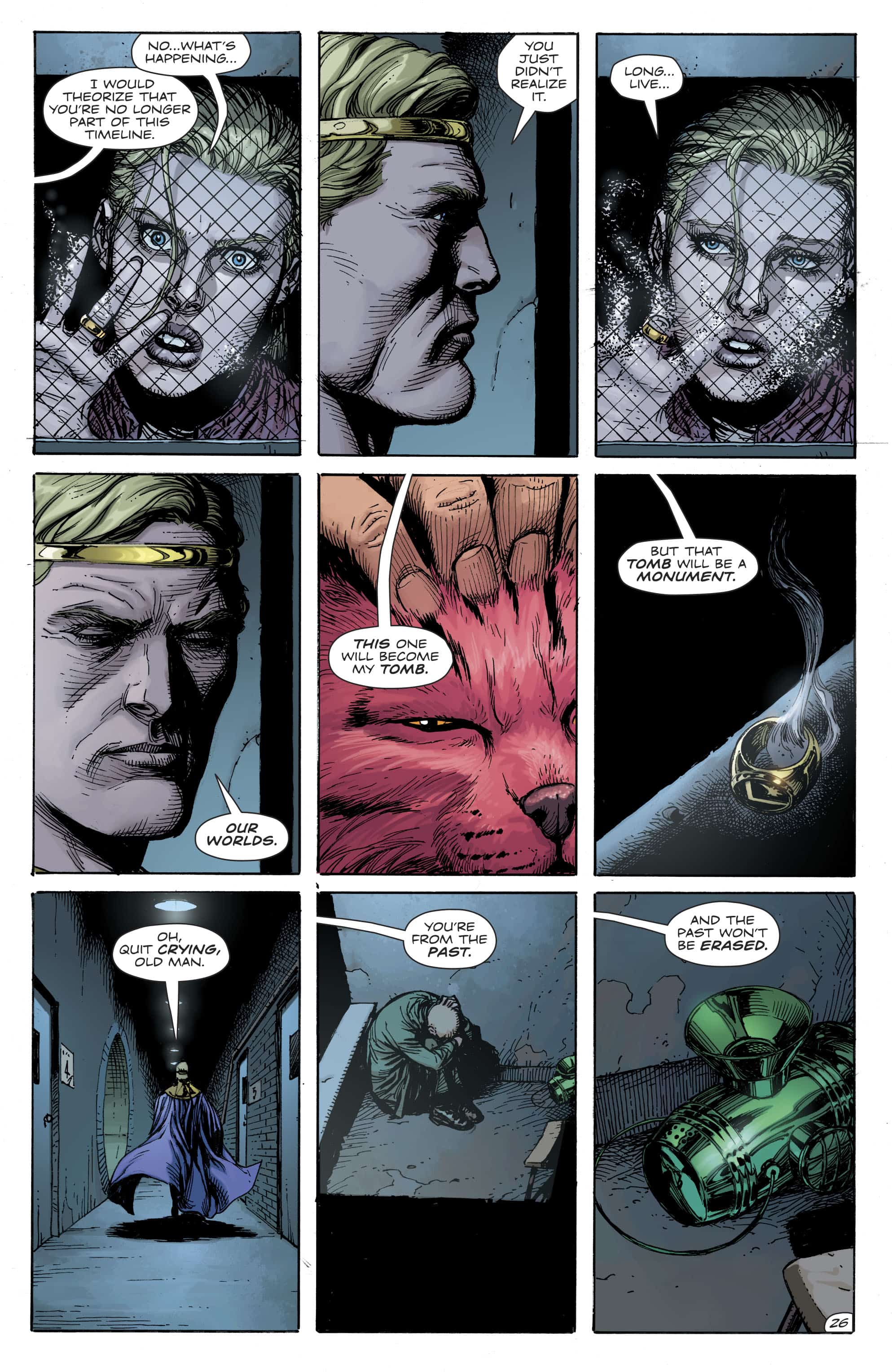 As a way of a final note, I’d like to call attention to the parallels between Coleman Carver’s film that plays throughout the narrative in the background to Moore’s integration of the “Tales of the Black Freighter” comic in the original. In both instances, the narratives of the fictional works being consumed throughout the series mirrored the central narrative of the comics series at hand, but also in both instances, these media artifacts seem chronologically displaced. They are antiquated forms of media that don’t necessarily fit in the time periods they are being consumed. Pirate comics were hardly the typical fare for a 1985 youth to be reading nor is there a large market for noir detective films in 2019, yet in both cases they appear. I don’t have a sound theory yet as to the significance of using discarded media forms as a mirror in these cases other than to say it is another element of the storytelling used in both texts that suggests there is much more bubbling beneath the surface of both epic tales than is immediately consumed.

The penultimate chapter of the most important comics series of the century is here as Doomsday Clock #11 (Johns, Frank, Anderson, Leigh) begins to gather all the various story threads to prepare for the conclusion.

Doomsday Clock #11: A Fistful of Strings