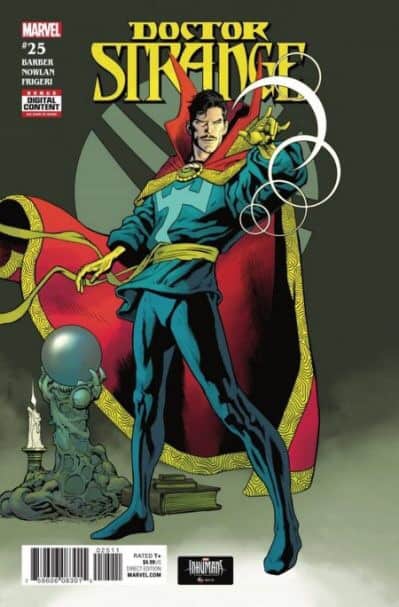 In the wake of Secret Empire this special anniversary issue brings the return of a mysterious menace whom our mystic Mage barely defeated in the past and has no recollection of…at ALL!

New artistic team, new story arc. Taking over the reins from Dennis Hopeless and Nico Henrichon are the writing talents of John Barber (Doctor Strange/Punisher) and bringing with him not only a hefty extra sized 25th issue but a small army of artists to tell the whopping flip flop flashback fandango.

Magic on earth is recovering in the wake of a narrowly snatched victory against an attack by anti magic zealots from an alternate dimension. While retrieving one of the last remaining enchanted artefacts Strange was poisoned, causing his friend and new apprentice Zelma Stanton to transfer said poison to herself. In turn the good Doctor bestowed upon her some of his magic immunity, considerably weakening himself against magical attack. This however clearly isn’t defence enough for the new apprentice…

When Zelma exhibits a form of demonic possession at the breakfast table it suddenly becomes apparent that morning coffee and waffles won’t do the trick. 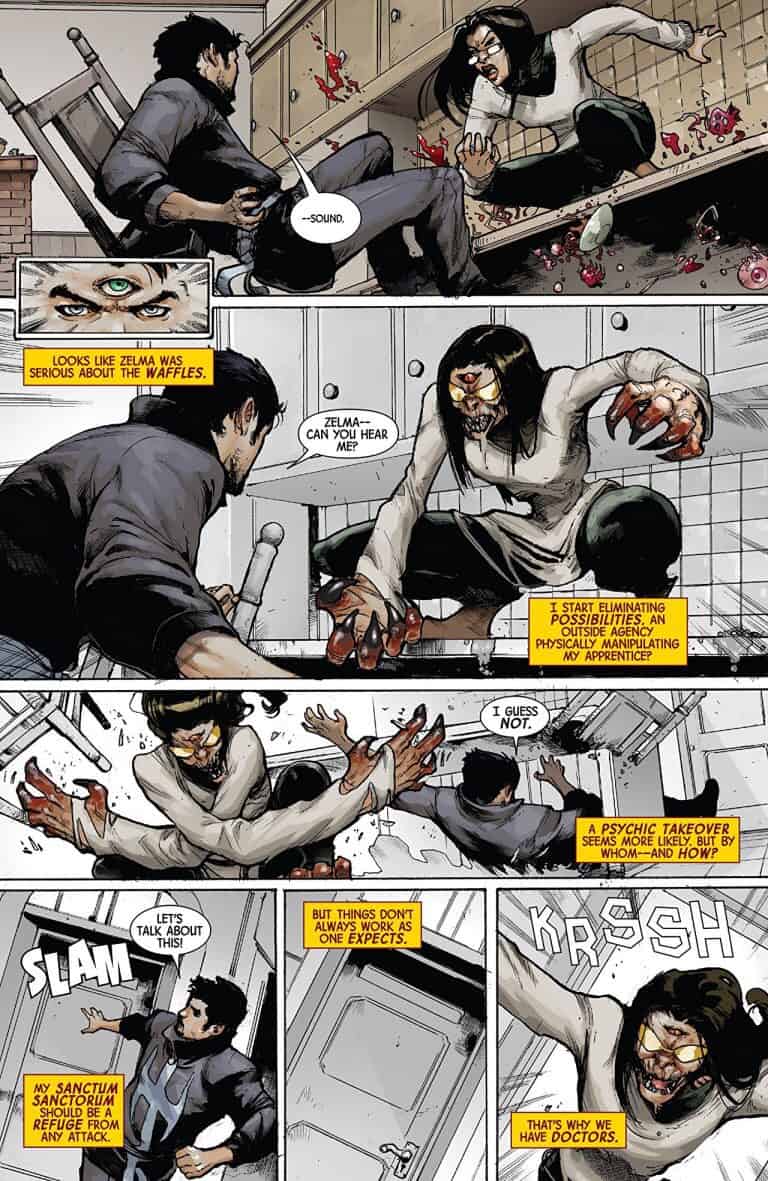 As Doctor Strange witnesses that not only Zelma, but all of Greenwich Village has fallen foul of a greater threat than simply becoming its demonic denizens the nagging feeling occurs that he’s been here before. The situation is of course complicated by his weakened state and the fact he cannot risk openly fighting a horde of demons for fear of hurting the people of New York City now seemingly controlled by a forgotten threat from his past. A threat which has now reemerged, due to recent events within the magical plane having weakened his previous spell, a spell he has forgotten and an enemy he didn’t even realise existed. Truly the repercussions of recent events have come home to roost in a way he could never have suspected. The ensuing battle takes place not only in a foreboding fortress within the confines of the past as he fights off demons with naught but his trusty Eye of Agamotto, but simultaneously in the present on the streets of New York as he battles in true mystical style with what limited weapons our previous Master of the Mystic Arts has to hand….including a hastily appropriated Stop sign and an ax. All of which takes him on a path that leads to a mental asylum where he finds the building crammed to bursting with wheelchair bound ne-er do wells, demonic nurses and patients literally climbing the walls to get to him, each hell bent on stopping him reaching his levitating nemesis. 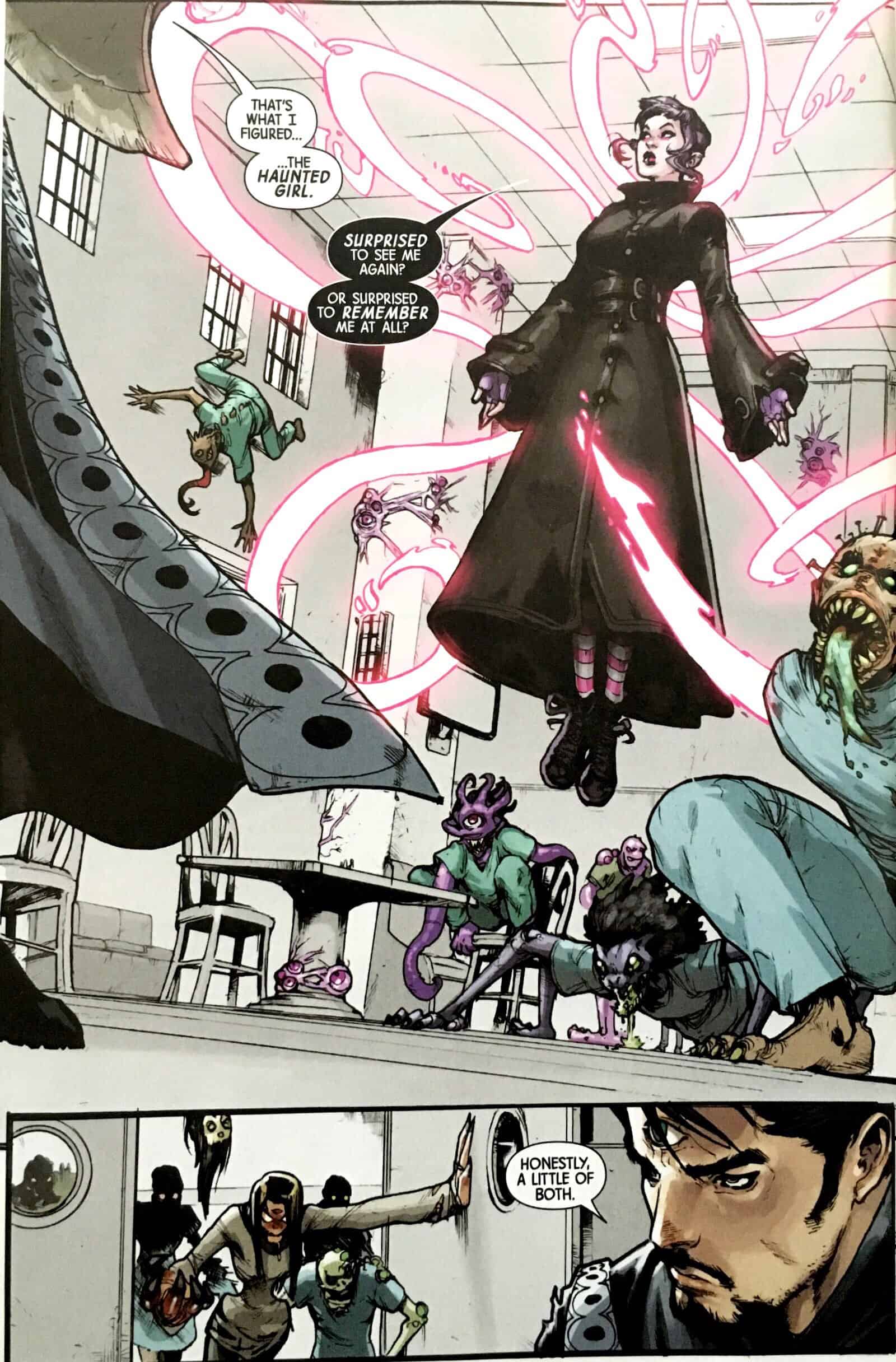 The inevitable face off brings him to the realisation that when he previously encountered the girl as a child he had blocked her burgeoning powers rather than attempt to train her in their use, as they were seemingly out of control, using a spell which also made him forget the incident. He also has to come to terms with the fact he was wrong all along and she was neither a demon or controlling people to become demons, her power was simply to see other peoples fears and memories and make them take form. As the two discuss things in a way that leaves us in no doubt the solution to the past dilemma was a complete failure, not only was the girl not under any previous spell or possession but the power he had denied her in the past has come back due to his weakening spell and she simply wanted him to answer for what he did. Not only does she reason he was wrong for blocking her and not teaching her how to control it but now when he offers to help her and take her as an apprentice she realises she had been wasting her time. As well as refusing his offer she adds insult to injury and flies off to do what she wanted all along and ‘help’ people via their memories. Thus leaving him with the double dilemma of having to explain to Zelma how her jaw got hurt by an errant Stop sign as well as try to encourage her to have a late breakfast she wasn’t even keen on in the first place as it consisted of eyeballs…..no waffles in sight.

As the story flips back and forth between his current dilemma and the past situation, hauntingly familiar to Strange from the depths of memory, we are treated to an artistic smorgasbord of imagery from both the present style and the past. The historical part is drawn in part by Nowlan (about time he got his hands on more then the covers) and joined by the bold colours of Tartaglia, it all lends a style reminiscent of yesteryear with appearances by both Clea and Wong and scattered with “Eternal Vishanti” and “Hoary Hosts of Hoggoth” aplenty. The narrative cleverly helps avoid the common pitfall of a disjointed flashback tale by clearly defining the dialogue and visuals of the past, placing the present well and truly in seamless tandem by use of great pacing and threat of imminent danger. It also acts as a reminder to both him and also all of us at the same time not only just how far he has come from those early days but also of his new limitations. All of which serves to avoid the feel of a fill in issue as it builds to the inevitable conclusion and wrap up as we forge ahead to the forthcoming inclusion into the Legacy era.

Final Thought: It will be interesting to see the progress our hero makes as we reach the penultimate issue next month as Strange and Zelma make their last house call in the finale which finds him not only stripped of magic but with just his crippled fists for defense. All of which comes before the new beginning, when issue #381 follows on with a tale unnervingly monikered Loki: Sorcerer Supreme. Having only read previous installments desperately searching for the illustrious Illyana myself I find I am now actually quite keen to learn what this new apprentice will bring him and what she can learn. The art of Bachalo while missed has been successfully and adequately replaced here by Nowlan (did I mention it’s been a long time coming for him to be given more than the odd cover to do?) giving me the feeling things are in good hands and the way forward will be as demanding and challenging for Stephen Strange as ever before. The Doctor is most definitely in. Bring in the mischief I say.