DUNE: A WHISPER OF CALADAN SEAS #1: There’s No Place Like Home…

DUNE: A WHISPER OF CALADAN SEAS #1 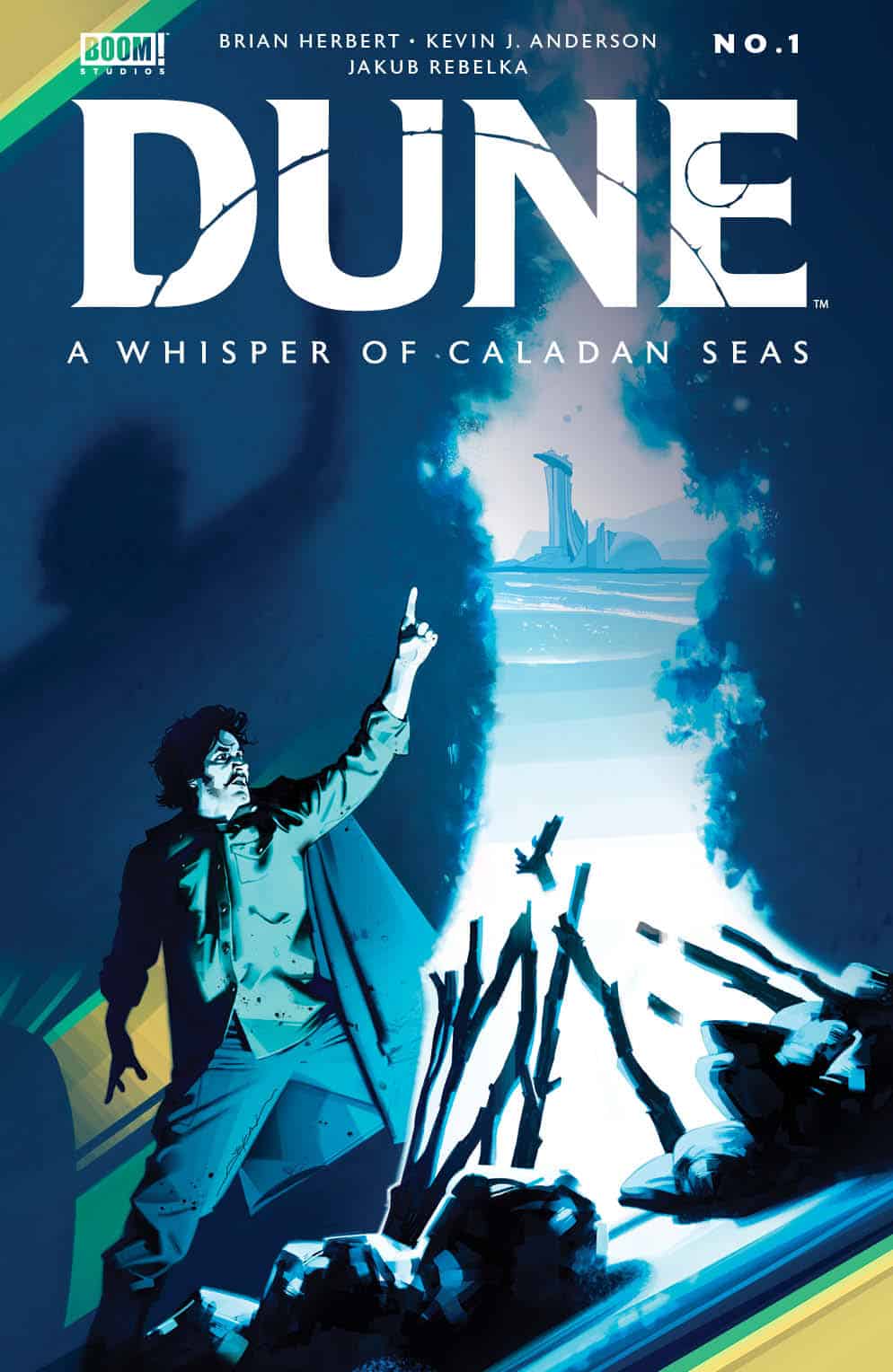 During the chaos of the legendary Battle of Arrakeen, a group of Atreides soldiers get caved
in. So while Paul Atreides meets his destiny in battle, Sgt. Vitt uses his family’s gift of
storytelling as a Jongleur to transport his men from their tomb to their homeworld of Caladan.
Can Vitt mentally transport them back to the lushness and vast oceans of Caladan and give them
the gift of hope in the darkness?

Herbert and Anderson once again take us back to the same pivotal moment in DUNE history
recently examined in the excellent DUNE: BLOOD OF THE SARDAUKAR #1… The Battle of
Arrakeen.This time however the tale is told not from the point of view of the attackers but
rather that of some members of the beleaguered Atreides forces who are backed into a corner
after the vicious attack finds them trapped in the caverns in the shield wall. 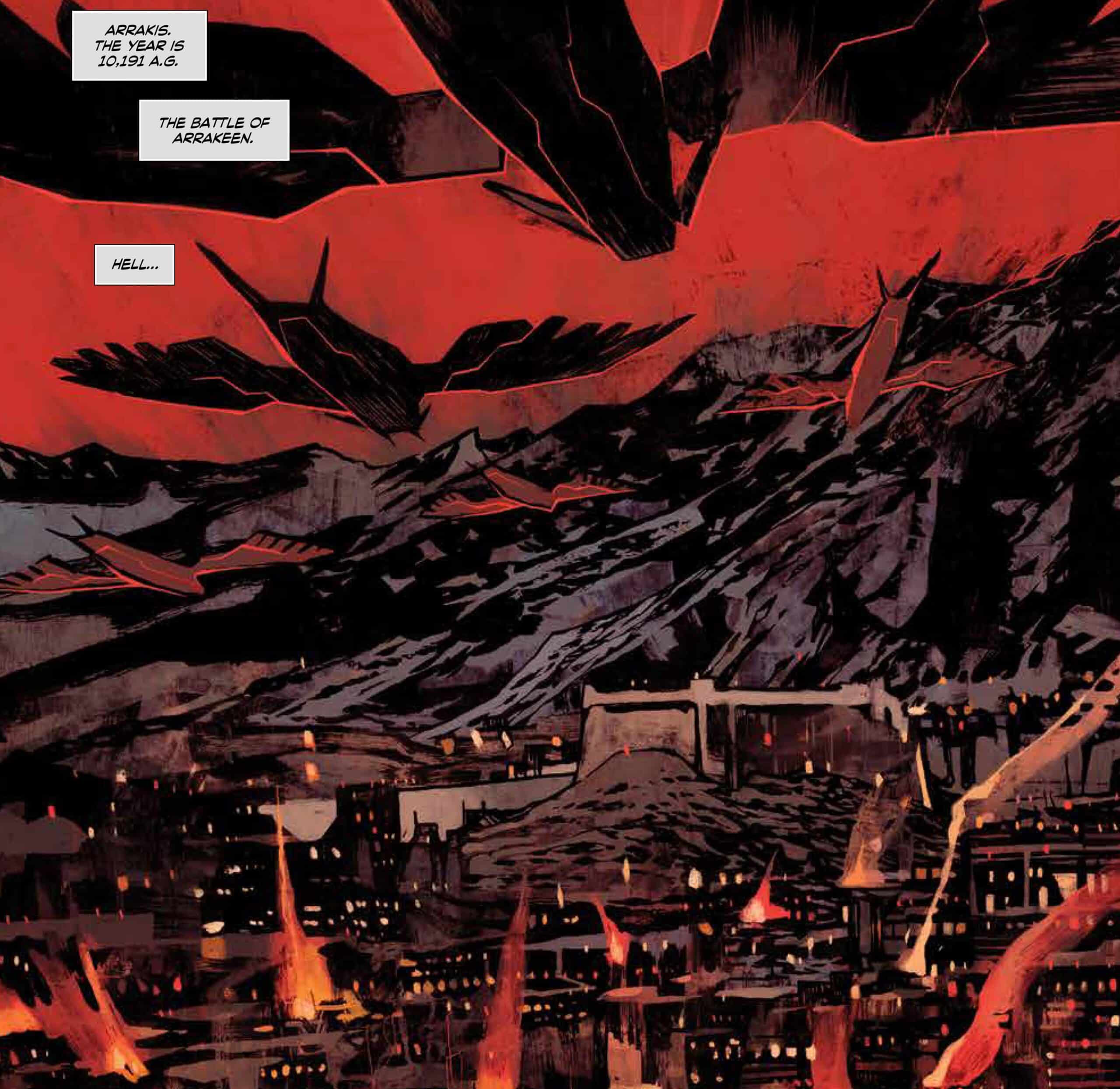 It’s a grim tale but at the same time, poignant as an Atreides Captain Hoh Vitt formerly of the
fallen House of Jongleur gives what little succor he can to the doomed men he leads including his injured nephew in the form of master storytelling that can transport their imaginations
away from the dire situation they find themselves in. Herbert and Anderson create a mood of
deep desperation. It thoroughly drives the point home that the Atreides forces were never truly prepared for the harsh planet they were sent to and that leaving Caladan behind made them the literal fishes out of water…and we all know what happens to those.

The brief insight into the idea of House Jongleur and the idea of the power in storytelling and
the ability to capture the conscious and unconscious imagination of one’s listeners to the point
of being able to use storytelling as a weapon is fascinating and I would love to see a comic
about the fallen house at some point. 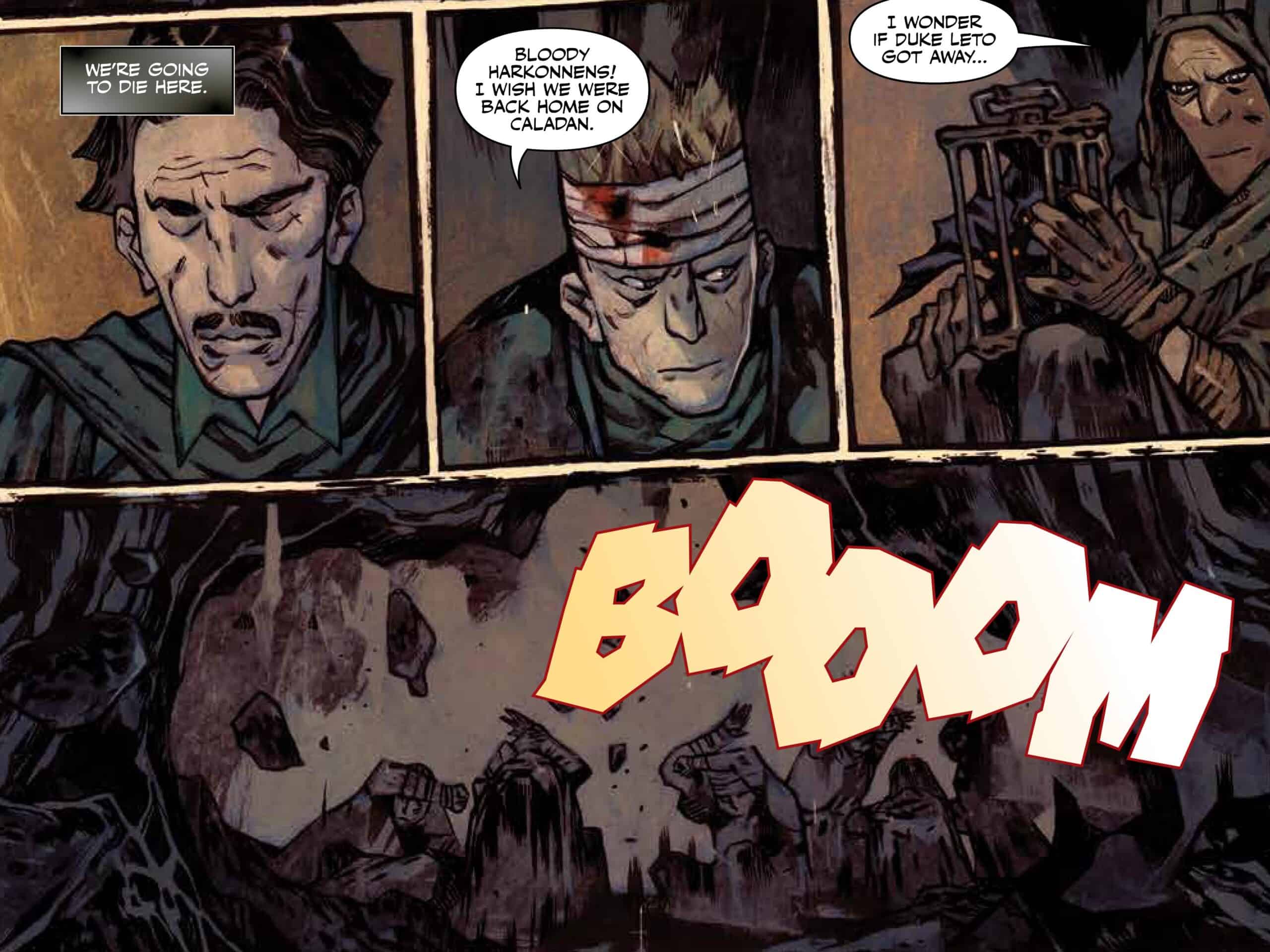 Jacob Rebelka whose work I am familiar with from the sci-fi series ORIGINS is on art duties.
Rebelka has a very different art style from the artists that have been working on the other comics but there is a pleasing consistency to the look and feel. The Harkonen uniforms match the art in the previously mentioned DUNE: BLOOD OF THE SARDAUKAR #1. Rebelka’s painted style brilliantly captures the brutality of the Arrakeen attack, the cruelty of the Harkonnen forces, and their surprise artillery bombardment so unexpected in an era of Lasguns and Shield. Rebelka’s deep angry reds burn the city of Arakkeen even as he smartly contrasts the desperate muted blacks and browns of the soldiers stuck in the cave with the beautiful foam topped blues and vibrant colors of the life filled world of Caladan as Captain Vitt does his master storytelling, sweeping his men away from the harshness of the world they are trapped on. The contrast is startling and while Rebelka’s work skews toward the abstract in many places it never breaks down fully with harder lines (especially with the human characters) and the place where he finds that balance makes for a gorgeously rendered comic that is a study in contrast that ultimately lifts the very grim subject matter to something I would definitely read again.

Jeff Dekal’s main cover is as always a work of art that could (and should) hang in an art
museum somewhere. Ed Dukeshire does some awesome sound effect work especially with the BOOM of the artillery and all in all it’s a stylishly packaged whole which helps with the rather
morose nature of the tale.

This is a stylishly told tale of woe that captures another facet of an iconic moment in the
story of Dune from a new perspective. Marvelously emotionally impactful art elevates the
writing which combines to deliver a vignette that is melancholy, tragic and to expand the canon
in a small yet moving way.

DUNE: A WHISPER OF CALADAN SEAS #1: There’s No Place Like Home…