DUNE: THE WATERS OF KANLY #1: The Art Of Vendetta

DUNE: THE WATERS OF KANLY #1 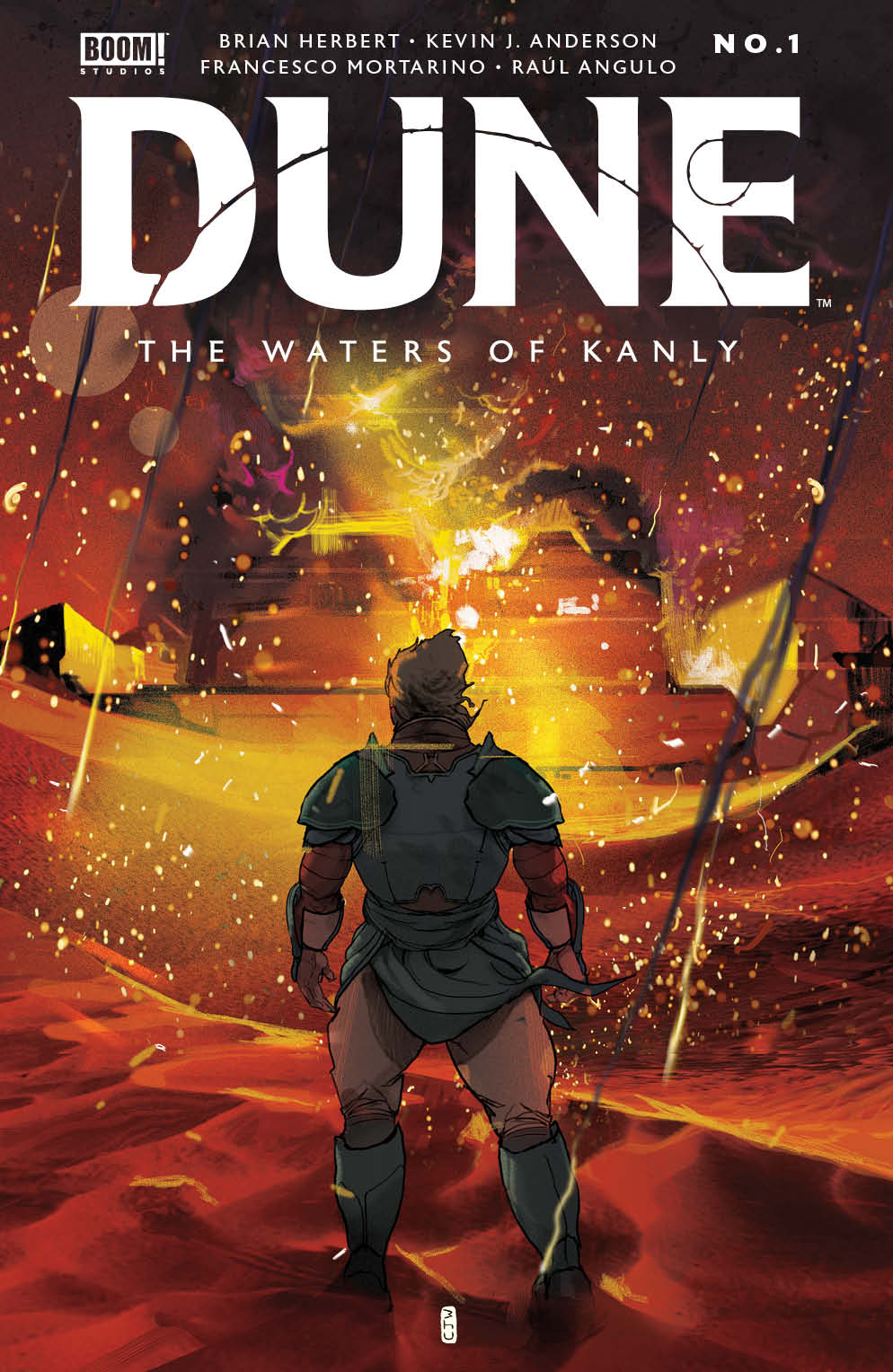 In the aftermath of the battle of Arrakeen, legendary House Atreides warmaster Gurney Halleck takes refuge with spice smugglers, vowing revenge against the Harkonnens no matter the cost. Halleck has a plan but will he be able to bring his Kanly vendetta to fruition?

Dune: The Waters Of Kanly is the third installment in a series of stories from Brian Herbert and Kevin J Anderson which all stem from the pivotal moment in Frank Herbert’s original DUNE when House Atreides fell to Harkonnen and Imperial treachery. The focus of this new four issue series is warrior trubadaour Gurney Halleck and his thirst for vengeance against House Harkonnen for the fall of his beloved Duke and House Atreides.

Herbert and Anderson waste no time setting up the premise here in issue one which starts on the night of the fall of House Atreides and then shoots forward to a year into Halleck’s time with the smugglers. Halleck is still smarting from the loss of his Duke and so are the loyal men who managed to survive the night with him. His constant melancholy for his lost Duke and his thirst for vengeance are a source of conflict for his new smuggler compatriots. Herbert and Anderson give us a brief history of Halleck which readers of the books would be familiar with but folks who have only seen the movies may not. In fact there are several characters used here which have never made it to the big screen. These include the Count Hasimir Fenring, the Emperor’s ambassador to the smugglers and Staban Tuek, leader of the smugglers and as a reader of the books it’s good to see them used in these new stories.

The story revolves around the idea of Kanly or the art of vendetta which must be paid in blood but has strict rules. Halleck wants revenge and Herbert and Anderson use the language around this from the novel to drive home Halleck’s deep need for vengeance against those who he believes are responsible as well as his personal need for vengeance against Beast Rabban. The characterization of Halleck bothered me at first until one takes into account that the man is in his darkest moment as he believes he has lost everything to the Harkonnens. He hatches a plot for revenge which along with the brief history lesson is what this opener offers us as readers. Herbert and Anderson adhere to the canon set by the books but have wiggle room here because of the lengthy time period (2 years) Halleck is with the smugglers to craft something original and interesting. There’s no major action in this as its mostly set up but it’s decently executed set up ahead of the drama to unfold. 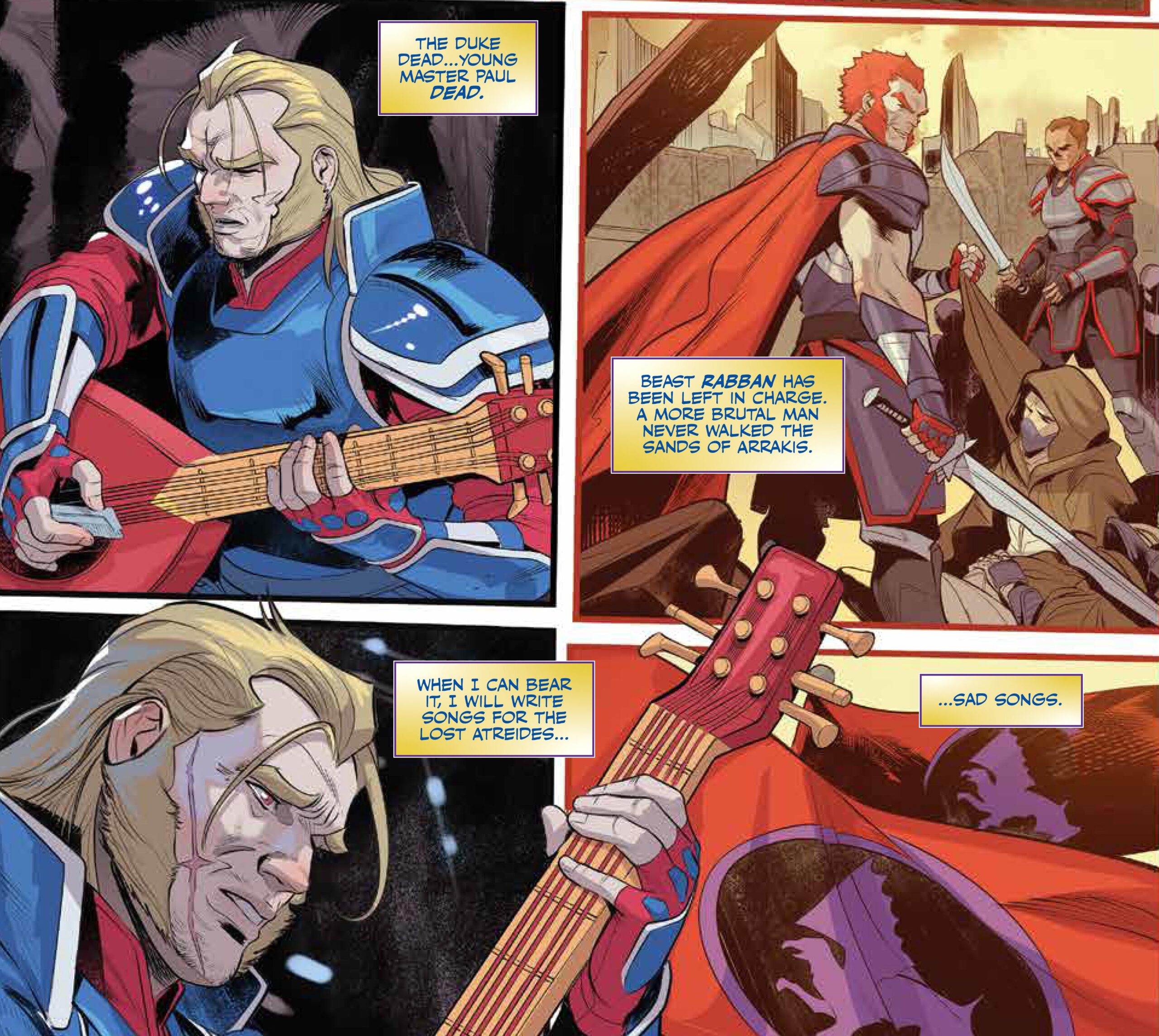 The art from Francesco Mortarino and Raul Angulo is excellent, colorful and has in my opinion elements in common with books like Seven Secrets and some of Dan Mora’s work. There’s a mangaesque feel to the way the book is paneled and I was reminded of older anime series I have watched before (in a good way) especially with facial expressions and character close ups. If I am going to be crticical of anything, its perhaps the artistic choice to have Gurney and several other characters remain in armor on Arrakis, only covering up with desert outer garb and not to put them in stillsuits. While the “Knightly” armor look Mortarino puts Gurney in isn’t completely out of place in the futuristic feudal society we are part of, having Halleck in his Atreides armor a year on doesn’t sit well with me. Overall though the art team has created a thoroughly credible opener set in Herbert’s fictional world. Ed Dukeshire is rock solid on letters and the main cover from Christian Ward is a flame scorched thing of tragic beauty.

DUNE: THE WATERS OF KANLY #1 is an excellent start to a series that focuses on one of the Dune Mythos's favorite and colorful characters Gurney Halleck. The issue is a well executed and engaging start on all fronts from writing to art and sets up what promises to be an exciting installment in the ever expanding mythos of Frank Herbert's DUNE.

DUNE: THE WATERS OF KANLY #1: The Art Of Vendetta