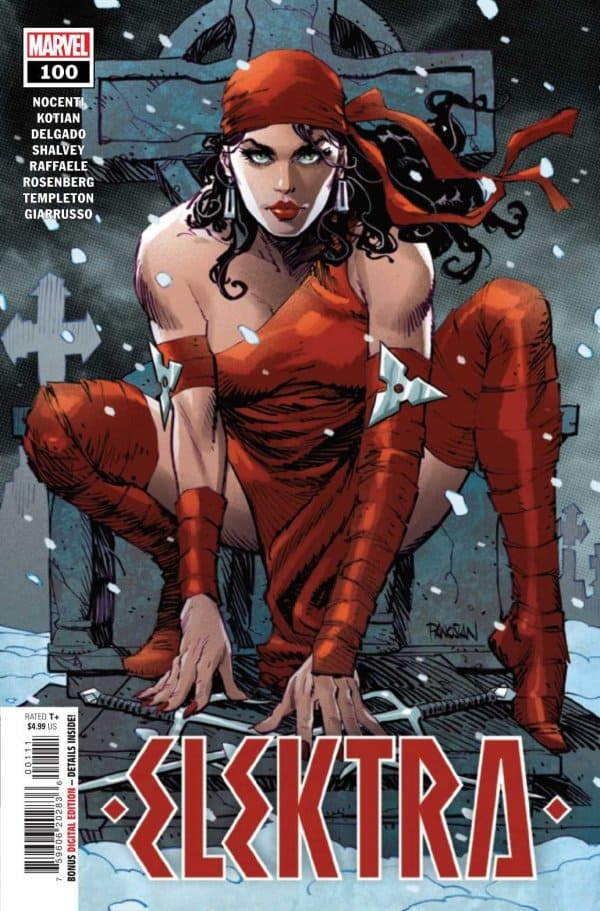 Elektra has been many things – a pawn, a pariah, and even a provocateur. But through it all, she has been one thing above all others: the most dangerous human being in the Marvel Universe! Everything that has happened in her long and storied life has been leading to this: the 100th issue bearing her name, and the starting point of what is to come!

I’ve been enjoying all the Elektra love these past few months. As a fan of the history behind the comics, I’m always down for celebrating the legacy of superheroes. Here, we have Elektra #100, a milestone for the crimson-clad assassin, with the headline story written by comic legend Ann Nocenti.

As I said, Ann Nocenti is an absolute legend and is responsible for the creations of Longshot, Mojo, Spiral, and Typhoid Mary, the latter of whom is the focus of this chapter. I’ve always been a Typhoid Mary fan, but from a distance as I wasn’t a regular reader of Daredevil or even Elektra until recently. But I had her action figure and her trading cards — she was definitely a presence in my comic book fandom. Here, we see Mary in all her personalities penned by her creator and I loved every second of it.

Of course, Elektra is the protagonist of the story, but the recent Daredevil run by Chip Zdarsky has me (as well as many others, I’d imagine) very invested in the Elektra/Typhoid Mary relationship. Part of me wants to complain about Elektra not receiving as much devoted page-time as Typhoid Mary in her own special, but this story was so darn good that I just cannot. Nocenti’s dense script had me nostalgic for the classic 80s comics which were filled to the brim with as many speech bubbles as possible. And despite the claim that “nostalgia is death,” I find it a very fulfilling feeling.

I’m also very happy that someone is bringing Typhoid Mary to the forefront. Her marriage to Kingpin was, I felt, rushed. We never really got much of Mary’s own thoughts on the matter. But here, it’s explored in its entirety. We also get some cameos from some of our favorite superheroes (Storm!) which is always a nice surprise even if we don’t really see Elektra or Mary interacting with them. Also, I’m not sure who Lady Midas is, but I loved seeing her and her other goon watching the fight from afar like a boxing match.

The art by Sid Kotian and colors by Edgar Delgado fit the story quite well. Kotian’s pencils have a sort of retro feel which bolsters Nocenti’s writing. I’m also crazy about Mary fashioning her hair into horns.

Before the next short story is a gallery of each of Elektra’s 100 cover arts. It’s such an unnecessary add-on, but I really appreciate whenever Marvel offers us a look into the past with pieces like this.

This tale may be very brief, but I was surprised how romantic the creative team was able to make this entry into Elektra #100. The relationship between Daredevil and Elektra is one of the most iconic in all of comics. This was a nice love letter to that relationship, with absolutely gorgeous art from Stefano Raffaele and Rachelle Rosenberg.

I’ve always loved the Mini Marvels pieces by Chris Giarrusso. They’re adorable and lighthearted but still relevant to the time period of comics. This one has Elektra inducted into the Daredoubles, a group of characters who have filled in as temporary Daredevils in the past. Great for a good laugh.

I love a good throwback to classic newspaper cartoons. Elektra’s not the first character I’d think of to put in a cartoon-inspired homage, but I enjoyed these pieces nonetheless. Part of me does wish we could’ve had another serious Elektra story mixed in, but we’ve had so many good Elektra stories recently, including the main story from this issue, that I just can’t be mad about it.

Whenever Marvel celebrates a major milestone for a superhero comic book, like a 100th issue, I expect greatness. And greatness is what we get here, particularly in Ann Nocenti's story. Elektra's relationship with Typhoid Mary is one of her most compelling, and what we didn't get in the main Daredevil title is explored here. I strongly recommend this special for fans of Elektra, Daredevil, Typhoid Mary, or the recent Devil's Reign storyline.