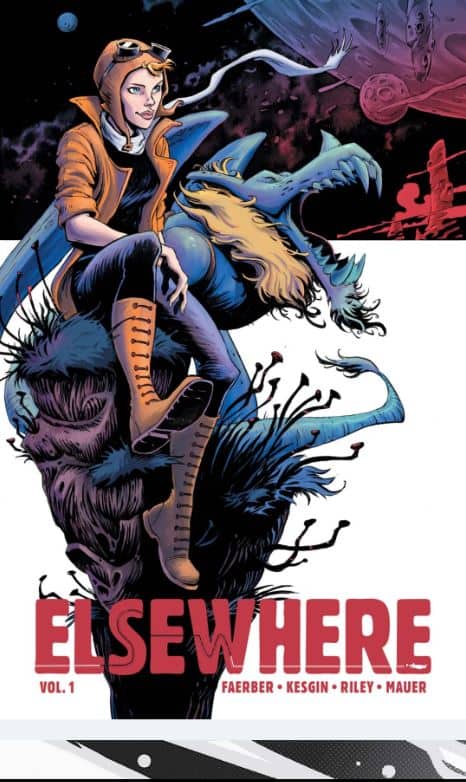 Elsewhere is a beautifully drawn and executed alternate universe story, set in a fantastic world with flesh eating bugs, dragons and flying rocks. The story follows a couple Korvathians who find a mysterious figure dangling from a tree…

The world of Korvath is beautiful and dangerous, ruled over by a despot named Lord Kragen and his army from his massive fortress. He has ruled over this land for decades, but a movement is working to overthrow him, two freedom fighters have escaped from the citadel and are working to get back to their home when something shocking and unexpected happens.

This is the first trade paperback collecting the first four issues with lots of art extras which Image often includes. With a book like this, the extras really sell it and Image clearly knows this as they are phenomenal. 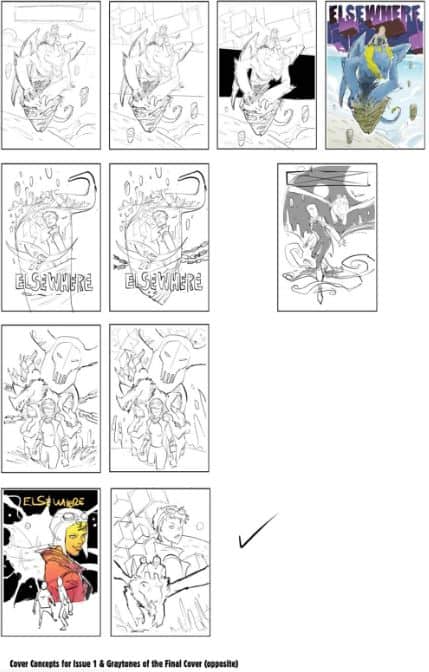 The story opens on Lord Kragen’s fortress, two voices are coming out of a sewer grate, suddenly the grate is kicked out and the two figures emerge. As if it wasn’t clear enough we aren’t in Kansas anymore, they’re clearly not human. Cort and Tavel are Korvathians, about the same size as a person and humanoid, with several visual differences. They sprint for cover as a search party flies overhead, consisting of several gigantic bugs and a rider on a strange flying machine.

A voice calls for help in the distance, Cort wants to investigate but Tavel thinks its too dangerous. Cort points out the yelling will attract attention soon and Tavel begrudgingly agrees. They soon find an alien creature hanging from a tree. The alien says she needs help, Cort climbs up and gets her down. He introduces himself and she does the same, her name is Amelia Earheart! 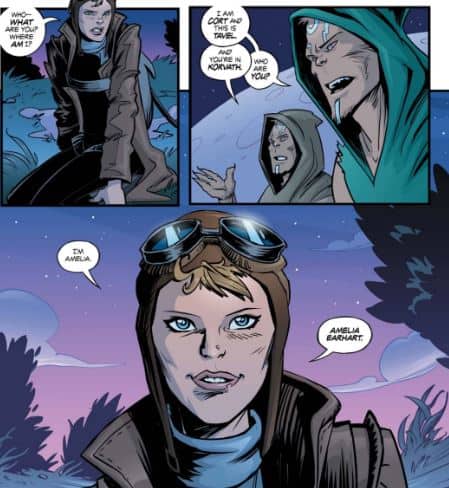 She explains that they had engine trouble (“what’s engine trouble?” haha) and they had to bail out, Tavel says that’s nice but they gotta go. Cort is more concerned with who else came with her. She says her navigator Fred was with her and starts shouting for him. This attracts the attention of the search party. As they run Amelia asks if she’s sided with criminals and they explain Kragen is the criminal, they just want freedom.

Suddenly they come across a building, Tavel and Cort light up, their salvation is near. They open the doors and inside are some kind of dragon type monsters sleeping in a huge barn, the Korvathians explain these are “Steeds” and they’re getting out of there. The mounts can only carry one at a time, Amelia is going to have to take her own. 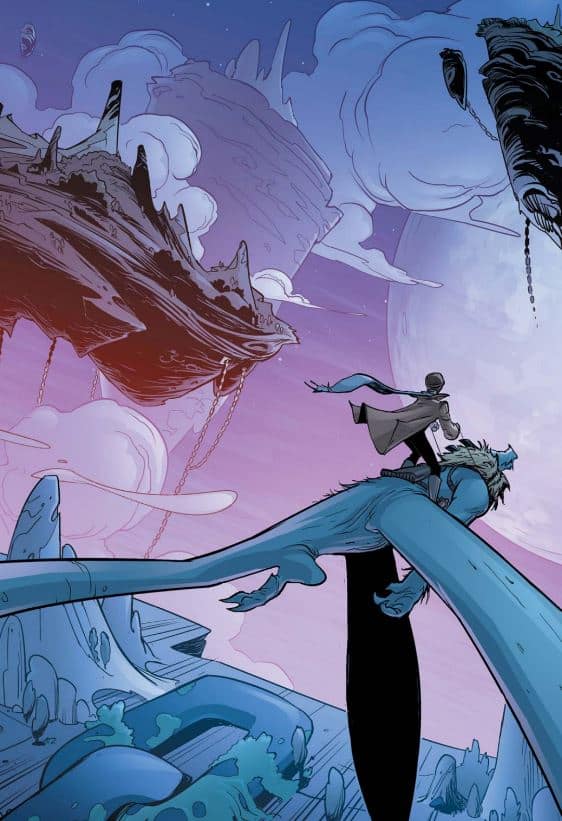 After several pages of truly stellar landscape art (like Jack Kirby good) as they fly the Steeds across the region, they find a place to land. They ask Amelia why she was talking about a plane, they’ve only heard that word once before, from the cell next to theirs. Lord Kragen has Fred. Amelia wants to rescue him, the Korvathians agree to help her after some discussion, but they need to know more, what exactly is a plane? 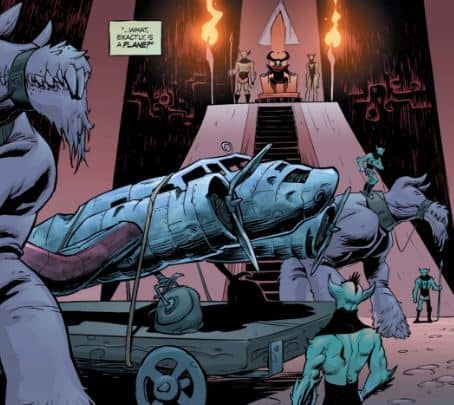 We cut away to the spotters looking for the trio, one says they aren’t going to find anything, another asks if he wants to go tell Lord Kragen that, they keep looking. Suddenly they find Amelia standing in a field waving her arms. She’s ready to come in.

In the jail she protests, she didn’t even know she was trespassing, they tell her to shut up and throw her in a cell. A figure sits in the shadows, she calls out for Fred. He replies “Who the hell’s Fred, my name’s Dan Cooper, call me DB.” 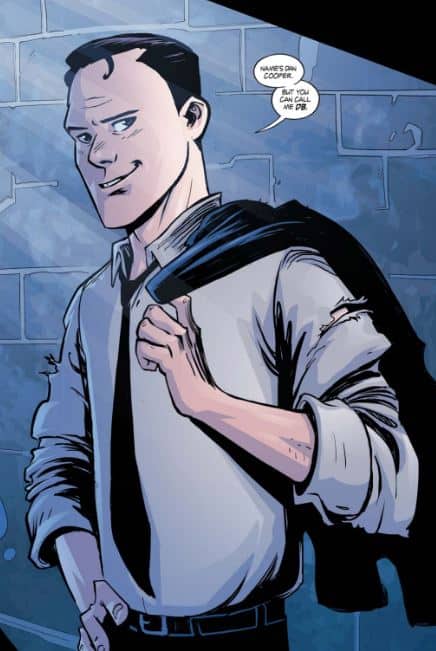 End of the first issue, read the rest of the story in Elsewhere volume one, available in stores January 3rd, 2018.

This might be one of my favorite new series in recent memory. The idea of famous pilots mysteriously disappearing and finding themselves in an incredible fantasy world is brilliant and something that could only succeed at Image, I love the concept. The story has some brilliant reveals at multiple turns and rarely does what you expect.

I do wish we got more background on the Korvathians, some questions are answered but it doesn’t feel like they get fleshed out as much as I’d like by the end, in comparison Amelia is believable and likable from the get-go, a decisive go-getter who will stop at nothing to find her friend. Conversely DB stays somewhat aloof and doesn’t volunteer a lot of info, which also is in line with my idea of the famous criminal. 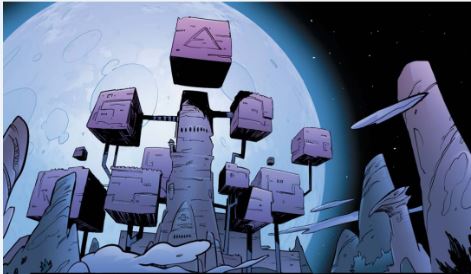 It’s hard to express how incredible the art in this series is, every landscape is flawless and epic and Kragen’s fortress is amazingly detailed. The creatures within are very well designed as well and help hammer home that we are far from home. The Karvathians are just human enough to be empathetically interesting while being just different enough to be visually interesting, a perfect balance.

Image Comics is really good about putting extras in their regular trades, rather than deluxe editions or hardcovers like some companies that I won’t name. One of the benefits of an artist owned company I suppose. This trade contains concept art, character designs, landscape concepts, a variant gallery, a couple pages with the script, a pin-up gallery and some cover process breakdowns. Incredible, I went over every page three or four times the detail of Sumeyye Kesgin’s pencils is amazing. The extras could be a book of their own (and with some companies they would be) and are such a welcome bonus as incentive to read this in collected format. 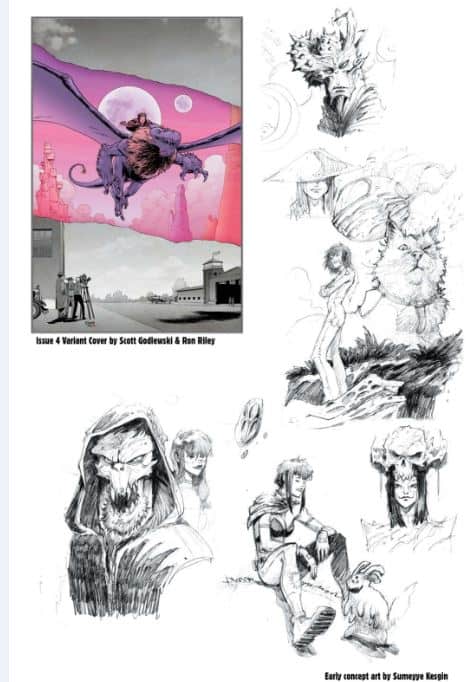 This series just made my pull list, I loved reading this book and will be fully recommending it to anyone who will listen for some time. If you haven’t been getting the regular series do yourself a favor and pick this up.