Eternals #12: You Got Me Running Around in Circles Over You 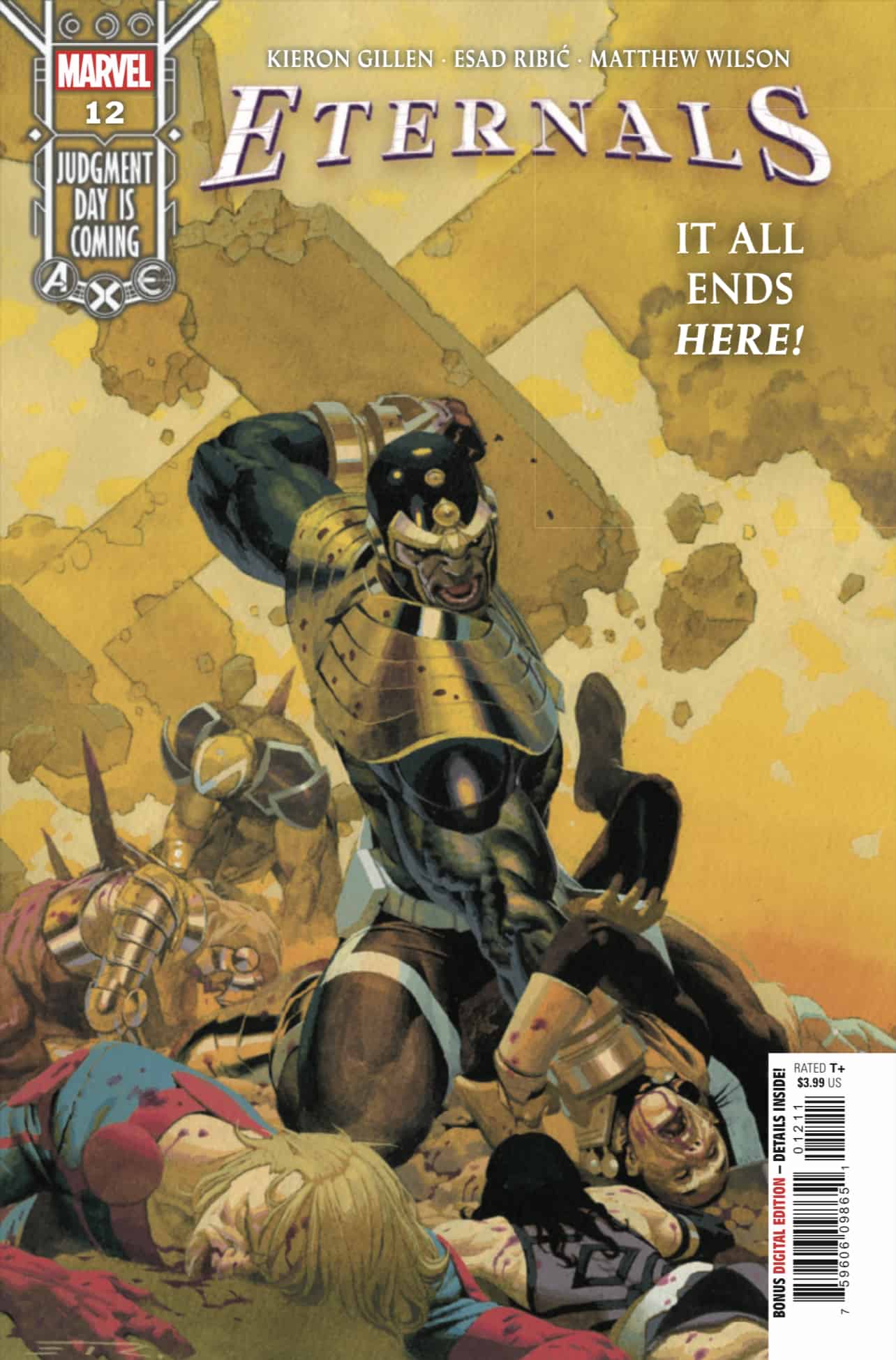 Thanos makes his closing strikes to destroy our world. Can the Eternals settle their variations with the Avengers in time to do something about it?

This is it! The last issue of the Eternals before the big summer blockbuster event between the Avengers, the X-Men, and… hey, the Eternals! Keiron Gillen and Esad Ribic have been tasked with shepherding this oft neglected franchise, and they’ve brought us a world lush, and ready to be explored. Whether you’re in the Exclusion, Olympia, Polaria, or Lemuria, there were so many layers waiting to be peeled back to give you a fuller world for Marvel to discover, build, and celebrate. Much like Wakanda or Atlantis, the Eternals have a world that’s ready to be shared with the greater Marvel fans, and this crossover could be the perfect time for it.

Over the last twelve issues, plus various one-shots, Gillen has built a framework on who these characters are, and how they can be used outside their own sphere, including the new Eternals that have been introduced in this run. With the secret of how Eternals are reborn, what happens when the life they take is not some nameless civilian, but of a known superhero? Will this secret remain kept from the greater Marvel universe, or will it be the straw that unleashes the Eternals secrets to the rest of the world? I think Gillen tried to give the Eternals resurrection some gravitas with the Toby Robson reveal, unfortunately he wasn’t given enough of a story to connect readers with. If we had suffered the death of someone we’re already familiar with, I think the impact would have had a bigger impact. Hopefully we’ll get a season two where we can see more of the impact on both Eternals, and the greater Marvel universe, as this reveal will be able to humanize these veritable “children of the space gods.”

One of my biggest complaints is the pacing of this story. Gillen really poured on the decompression here, and mixed with the delays, it kind of hurt the momentum this book needed. Especially considering Black Panther is no longer an active Avenger, and has been replaced by others. Another big issue was how closed off from the rest of the Marvel universe this book was, up until the last couple issues where they sneaked into Avengers mountain. The Eternals and Avengers have usually been on friendly terms, especially considering Sersi used to be a member of the group, so the need for subterfuge seemed kinda forced. It felt like this drama was created in order to put some friction and conflict in order for the two groups to butt heads in the upcoming event. Gillen is one of those authors who delivers, so I’m hoping to see where he’s going with this, and if the missteps pay off or not.

As far as the art is concerned, Ribic is as Ribic does, and that’s craft these big, larger than life images that lends itself to just how big these moments are. Esad Ribic’s style is very black and white, either you love it, or you don’t. Luckily I love it, minus a few of the faces (what was going on with Captain Marvel’s face in these issues?) It’s a style I’ve grown to really enjoy over the years. When we get issues (like the last issue) where Ribic isn’t there, it comes off as…not quite right. The guest artists aren’t bad, but it just doesn’t seem to have the same epic feel that Ribic’s tends to give to these types of tales, and he really went all in on this issue. I just kept staring at the panels, and breathing in the sci-fi masterpiece.

The finale between Thanos vs. the Eternals vs. the Avengers, and the blocks have been laid to lead into the upcoming summer event that’s going to rock the Marvel firmament…until the fall event arrives. Gillen & Ribic has done an excellent job world building these oft-neglected Kirby characters, so there’s a lot of hope that we’ll see more of them once AXE is finished.

Eternals #12: You Got Me Running Around in Circles Over You