Excalibur #1: The Sword is Drawn

Why has Betsy Braddock, who already has (one must admit) her share of identity issues, taken up the role of Captain Britain? Find out in this issue.

This issue provides a solid start to what promises to be an engaging, enjoyable — if hardly groundbreaking — comics series. There are enough handholds to the original series (the Braddock family, and their troubles, Otherworld and the accompanying joyful madness, a Krakoa gate in the family’s olde ancestral home) to engage fans who enjoyed the original series while at the same time rooting the series firmly in the new status quo of Mutants on the island.

It was good to see that humans are indeed allowed to live in the mutant nation. Shogo lives there; Brian can visit — Megan and Maggie, of course, can go there whenever they want. It was nice to see Jamie alive and, erm, well. The ideas cementing the series are absolutely fascinating — that the very presence of mutants in the world disrupts the working of Magic and that Morgan Le Fey herself is out for genocide — will lead to many interesting storylines. 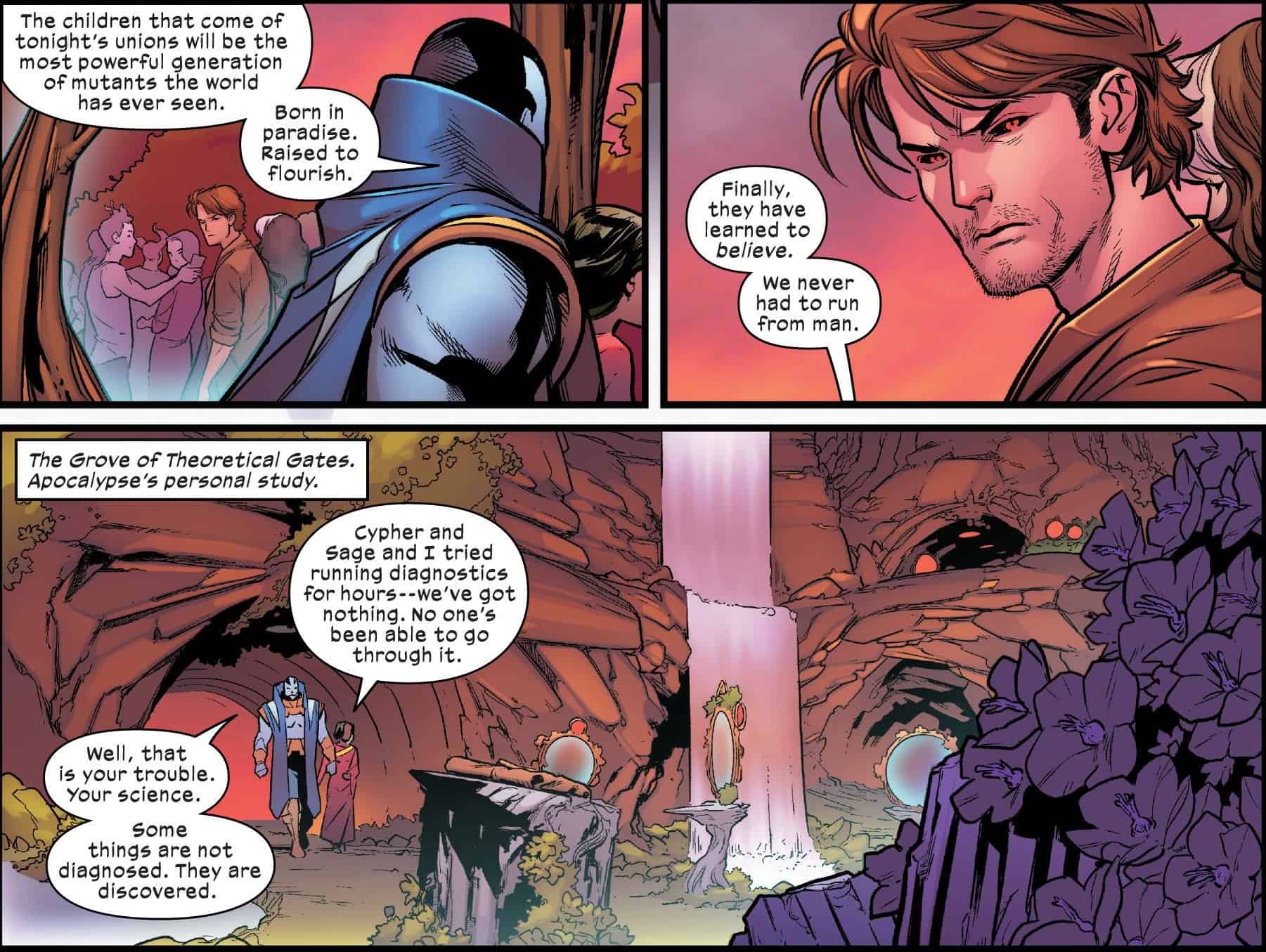 But there were a few off notes. It was deeply odd, for example, to see a character like Apocalypse (who has adopted a new name) so easily dismiss Science as an institution when so many of his plots have revolved around using that art to further mutant superiority. It was odd to see Rogue contemplating children so soon after the conclusion of her series led her in very much a different direction. There were also a few issues with the pacing of this book. For a text so rife with Magic, it felt a little slow. Some of that can be dismissed as the necessary exposition of a first issue, but by no means all.

However, these moments were balanced by other aspects of the writing. Trinary was defiant and snarky. Jubilee has, thankfully, not been regressed to teenage mallrat. No, she’s a single mom with a taste for mimosas. That’s truly an excellent direction for the character. I say that with absolutely zero snark. It fits. I loved that she and Betsy are still close and that Betsy herself is dealing with the repercussions of her stint playing a sexy yellowface cis het male fantasy — even inadvertently.

As for the art, it was ok. The colors were amazing. Erik Arciniega can imbue anything with an almost numinous energy. Unfortunately, Marcus To’s linework was unclear (who was that demon-tailed figure on the first page? TJ? But she’s in a storybook. It was too short and feminine to be Kurt) and too many of his female character seem to be sharing a face. Maybe this was just first issue jitters. Perhaps he’ll improve.

Taken as a whole, this series is extremely solid, but far from unmissable. Those who enjoy it (as I do, beyond a critical capacity) will likely continue to do so for some time.

Excalibur #1: The Sword is Drawn