EXCELLENCE #6: Trespass Against Us

Spencer Dales, a young man from a family of magical protectors comes into his powers late and frustrated, but with perspective that challenges the status quo. His potential is constrained by rules of a society that forces him to be unseen while protecting those who others deem worthy of his protection. As his powers excel, Spencer seeks the approval of his father, live up to the expectations of the family name, and confront the unjust rules of society.

Last issue, memories and all the feelings with them collide as Spencer deals with the aftermath from fighting with his buddy, Aaron. Meanwhile, Spencer’s dad has his own regrets and demons to fight. Mr. Dales reveals two major bombshells and Monique seeks out her mission, but Spencer is wise to his father’s spy. Secrets and lies may destroy the Dales family yet and there may not be a magic wand strong enough to fix the corruption. As many fathers, Mr. Dales’ choices are to make his son the best of the best. However – Excellence is real and it is a two way street; as many would say.

Most fathers want the best for their children. They want their young ones to turn out to be understanding, knowledgeable adults who contribute to society. Some fathers, believing that their young adult children are too inexperienced to make decisions, pull all stops to manage their lives. They inadvertently become the “monster” who interferes with their children’s activities and relationships. Others become pushy and to an extent, narcissistic; they enforce unreasonable expectations on their kids.

Excellence #6 hits the reader to the core of father and son relationship. This book speaks volumes for many young black male adults and fathers alike. The beginning of this issue, we see a flashback of the 12 year old Brother Spencer Dales and it is so intense, that I had to pause and feel what I just read. Young Spencer struggles to cast spells while being berated by harsh adult dialogue during a magic trial. A difficult childhood is often the reason for a person’s erratic ways. Throughout this book, I keep coming back to this page. Having a controlling father can wreck your nerves. However, maybe he was taught the same way as young Spencer.

Back in present day, we see Aaron waking up to his best friend’s thoughts. This is an important part of the Excellence series. Being able to predict how other people might feel, act, or react is a skill that helps us build better relationships. Pick up emotional cues, often from body language, tone of voice and other non-verbal elements of communication. Listen well to what people are saying, actively checking their understanding. Show sensitivity towards others, and understand their perspectives. However, be real as @#$%. It is not wise to overlook poor behaviors developed through a given point of view. Help other people appropriately, based on their understanding of their needs and emotions. Developing empathy, and particularly the skill of understanding others, is not just important to your interpersonal relationships, it can also have a much wider impact.

Aaron was given a gift of these skills through magic resulting from a fight with his best friend. No matter the skills acquired, like many people; Aaron’s feelings of fear, regrets, and shamefulness hinders the progress of improving relationships. Spencer consistently reaches out to Aaron only to be rejected time and time again. Now, this is where things get even more interesting. Spenser is developing into a bad ass wizard with some fire in the future for the Aegis! Keep in mind that in a world with magic and manipulation, nothing is ever what it may seem. Note: Spencer has learned many tricks of the trade by his father.

Monique is successful in returning Spencer back to his father. Mr. Dales is reading Ralph Ellison’s “invisible Man”. Brandon Thomas has brilliantly placed a story of politically awakening with deep and profound points in black culture. If you picked up on this, you may have compared Raymond Dales as a calculated master manipulator. Mr. Dales consistently micromanages tasks on Spencer’s behalf, fearing that he will make mistakes. His actions make his son feel as though he cannot be responsible for himself. It doesn’t even matter; Spencer Dales “excellence” in techniques proves he is this stories bad ass hero that this story needs.

I am now a huge fan of Brandon Thomas. He writes from the soul that people need to hear and understand. As a white privileged multi-cultural dude, I have had the experience that many do not; loving and living in the black culture. There are things that can only be learned through experience…until now. Excellence is a book that speaks to the soul with open eyes. After centuries of slavery, decades of segregation, and Jim Crow, continuous of “policing” and years of false fear placed on the black community – how could one not “understand” the well-deserved sense of anger? To this day, there are statements that plague our daily lives with racism. No “one” person can speak to everyone, but Thomas brings life to comic book writing through a black male perspective in Excellence!

Khary Randolph’s artwork excels a hip-hop superhero style that intrigues the imagination during the action scenes. Emilio Lopez uses beautiful bright and vivid colors to bring out the magic in each panel. It’s the power of Deron Bennett lettering that draws the attention and guides the reader to connect the all aspects of this story. 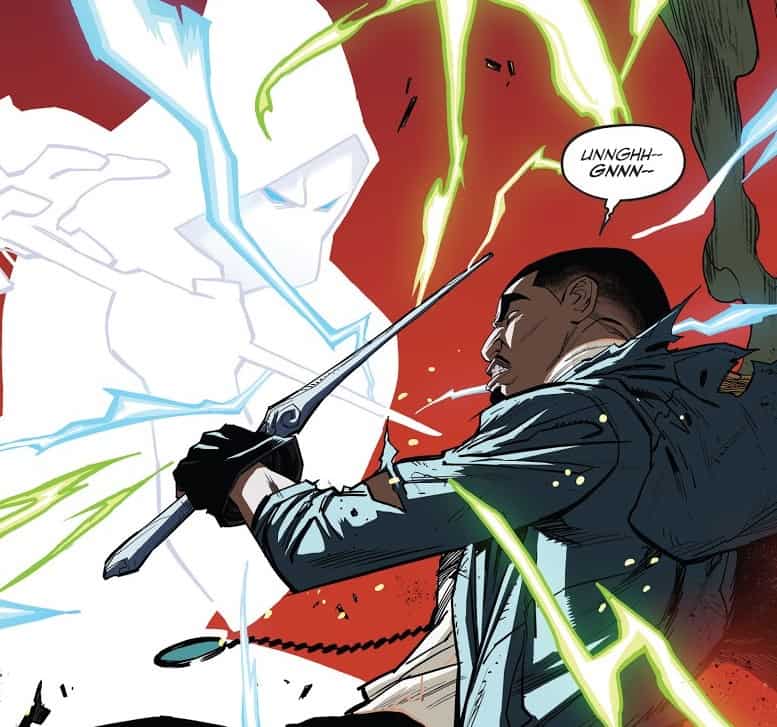 Bodily and mental happiness always depend on others, because gratifying the body and mind is dependent on one’s body and its culture.

The trespass against us may be hard to take in and digest. Excellence #6 is the bitter sweet life lessons that need to be absorbed.

EXCELLENCE #6: Trespass Against Us