Exciting Comics #18: An Amnesiac, a Sick Superman, a Genetic Anomaly, and a One-Ton Pre-Teen Walk Into a Bar… 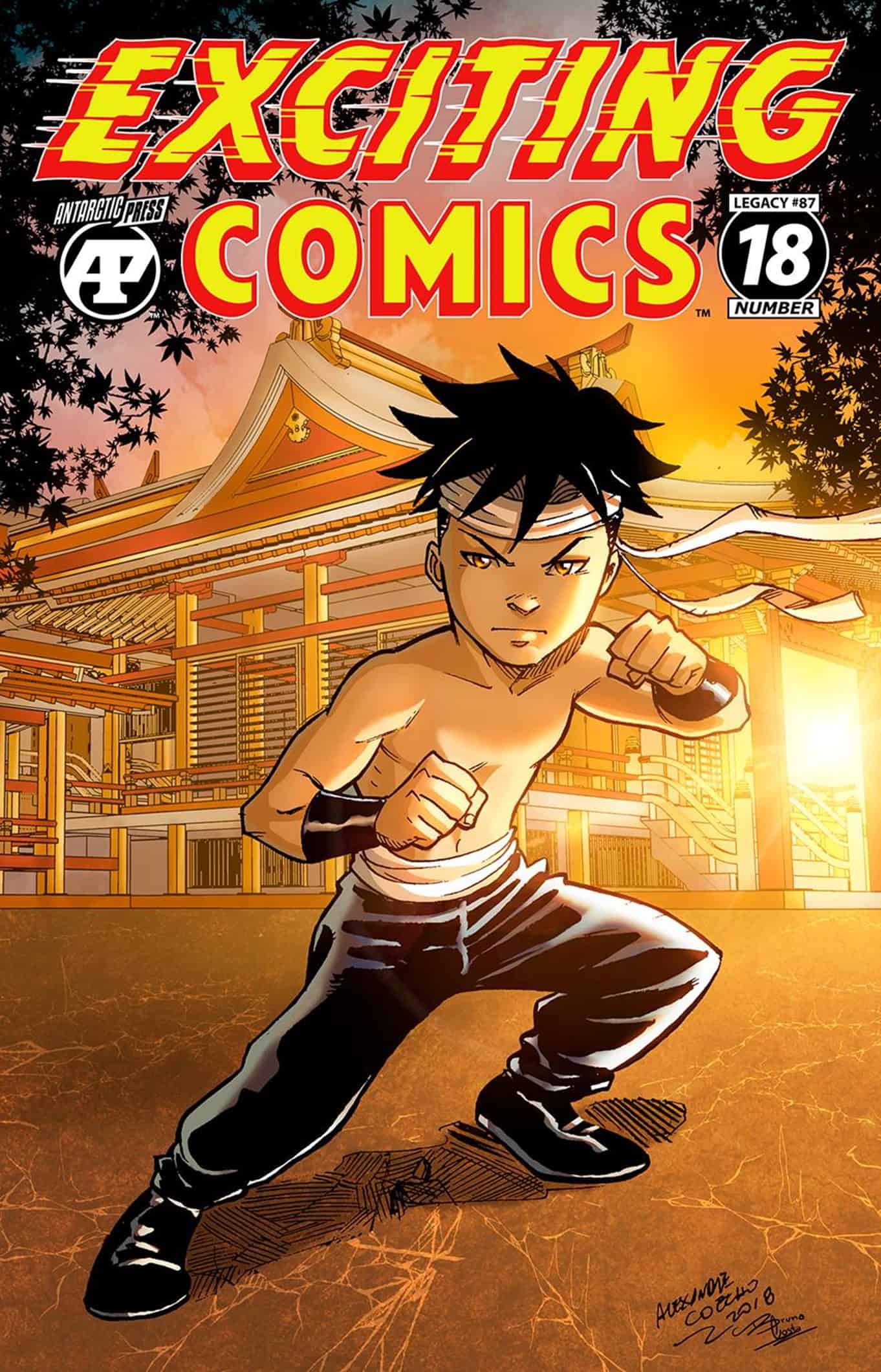 Exciting Comics is a continuation of the popular golden age comic that ran from 1940-1949, which most famously featured the now public-domain hero, Black Terror.

Like its gilded predecessor, Exciting Comics contains several superhero adventures per issue, most of which are serialized through several installments.

Antarctic Press founder and editor of Exciting Comics, Ben Dunn created this anthology series with the hope of creating a superhero universe (dubbed the “Superverse”) for the long-time publisher. And while many of the characters and stories have yet to formally cross-over as with other traditional comics universes (each individual story is creator-owned after all), the 18 issues thus far have provided more than enough interesting characters and worlds to lay the foundation for one.

Let’s dive into this month’s corner of the Superverse with Issue #18’s four installments:

The story so far: After his first day at a new school, boy superhero Hiro Tokunawa has just accidentally revealed his powers, when he crushes a speeding car to save his new friend, Robbie.

In this latest chapter, we learn Sumo Boy’s origins in a brief, narrated flashback sequence as he relates his past to Robbie. Hiro came to weigh over a ton as a result of a curse from ancient Japanese folklore in which babies would be slowly turned to boulders – a fate he was able to avoid due to a compassionate sorceress who would eventually become his mother. Flashbacks are pretty common in origin stories; however, I much prefer proper action and dialogue sequences to tell those stories rather than illustrated exposition.

Sumo Boy is perhaps the most innocent of the superhero romps told in Exciting Comics thus far, possessing a mild art style and low-stakes concept. While it certainly does not offend, it is not terribly engaging either.

The story so far: Justice Theta is a Superman analogue who has discovered he is dying of untreatable cancer.

In the latest chapter, Justice Theta deals with the fallout of brutally killing the villain, Tragedy (half of the fraternal felon duo of Comedy & Tragedy). Comedy has gone insane from losing his brother and begins to plot his revenge. Justice Theta learns that his cancer is a result of the alien technology that gave him his superpowers; and we are given some foreshadowing that this may cause more uncharacteristic behavior such as severe mood swings and personality changes – a great setup for a storyline that might take a turn like the falls of Superman in Injustice or Plutonian in Irredeemable.

Fallen Justice is an excellent get for Exciting Comics. Originally published as a seven-issue series by Red Handed Studios, the preexisting scene breakdowns fit remarkably well in anthology format. The writing and art both balance the seemingly paradoxical tone of a serious life issue taking place in the context of a whimsical superhero world.

The Fallen Justice chapters alone are worth the price of the comic.

The story so far: After the destruction of Paradise City, an amnesiac hero (or villain?!) is being hunted by an elite, government military force using imprisoned superpowered beings known as “hyprids” as their weapons.

In this chapter, Nothing-Man, who was cleverly named by a local reporter who mishears him respond to a question about saving people from a burning hospital by saying, “…it was nothing, man,” is on the run after the impromptu rescue. He and his companion Diana are joined by the villain who started the hospital fire, Firecracker, who has now been freed from her captives.

This part includes another origin story detailing Firecracker’s life of government testing and imprisonment – it is told through illustrated exposition (for my thoughts on that, see above). While we mostly get dialogue in this sequence, it is well paced and effectively establishes the trio as our protagonist team from here on out. I am really enjoying this story but must say I am not a fan of the intentionally, overly sexualized art style.

The story so far: A young woman named Pamela has made national news due to an ultrasound showing her baby is bearing wings. The superpowered Nyobi has been called in to protect her from growing, violent protests of those calling for the death of her child.

In this brief chapter, Nyobi sits with Pamela in her home discussing her options for her pregnancy when they are interrupted by the appearance of an angelic villain sent from the Vatican to protect the child.

I am not caught up with my X-Men lore, but this story would fit right at home in that universe. Indeed, much of the world-building so far seems to take direct inspiration from Marvel’s merry mutants, called “G-Noms” (short for Genetic Anomalies) in Nyobi’s world.

At the core of the story is Pamela’s struggle to decide if she should maintain or terminate her pregnancy. These kinds of stories, especially if not written by women, have a very tight rope to walk if they want to pull off a believable and unobjectionable story. Thus far, it seems both feet are still on the proverbial wire and Nyobi has a chance to pull off an interesting take on superfolk. There is also unsubtle subtext about religion and society that are welcome as well, so long as they don’t fall into cliché.

Larry Higgins is juggling a lot of heavy themes in this story that could at any chapter provide a satisfying superhero parable or fall into a botched, tone-deaf hot take. Here’s to hoping Higgins and co. stick the landing. I’m ready for the next chapter!

Admittedly, Exciting Comics #18 is not the best jumping on point, but here’s why you should care: Exciting Comics is an anthology series that takes open submissions from comic industry hopefuls, giving them an opportunity to showcase their work in a legitimate comics publication.

Such a premise is admirable, though it does come with its downsides. Anthologies like this provide a refreshingly wide variety of style and content in a single issue, but unfortunately that means quality can also vary (copyediting is not a strong suit of this series). I’m as die-hard a fan of Marvel and DC as anyone who manages a comic shop, but I’ve personally always loved indie superhero stories. If you can relate, then this might be a great title for you.

Overall, are the chapters of Fallen Justice and Nyobi gripping enough to prompt you want to read where they began (Exciting Comics #15 and #17, respectively) and get you, dare I say, “excited” for the next chapter? I’ll answer for you: yep!

Exciting Comics #18: An Amnesiac, a Sick Superman, a Genetic Anomaly, and a One-Ton Pre-Teen Walk Into a Bar...