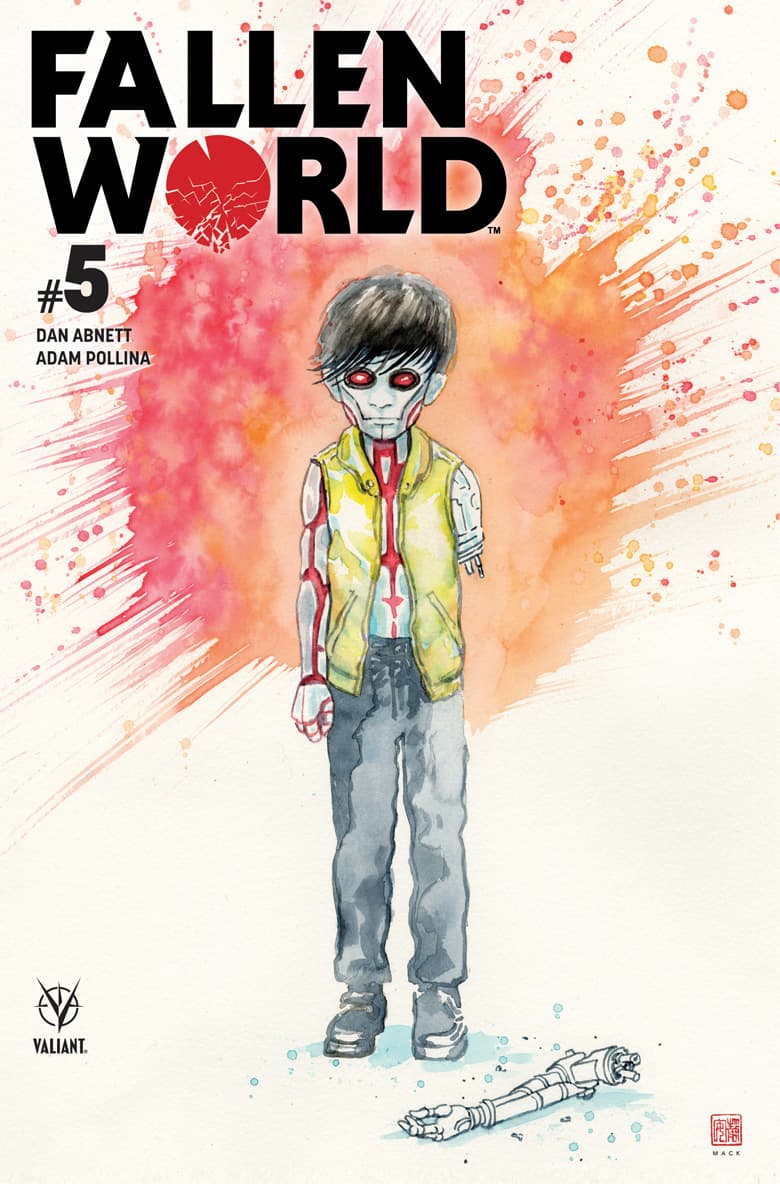 Bloodfather and his "Deathstar" loom over the few remaining survivors of New Japan in Sontaku Sector, the fallen colony turned sanctuary. His hordes war against Rai and his allies the Kortunga aka mutant animals which are also fierce barbarians. Bloodfather's campaign of death shows no slowing down as he also "infects" the city's defense systems and prepares to turn them against the people of Sontaku as well. To say they're in it deep is a massive understatement but Rai and his allies refuse to quit, to just lie down and die against insane odds.

The betrayal of Bloodfather by his older son Raijin, the prototype of Rai becomes apparent when he reveals he's thrown a monkey wrench in Bloodfather's plans. You see in order to return to cybernetic "godhood" Bloodfather must reclaim 12 back up systems in the form of androids hidden across chunks of the decimated New Japan, now scattered across the face of the Earth. Raijin, who is more C-3PO than Darth Vader (but he can still totally kick butt.....more on that later) destroys one of these fragments and in revealing his intention to betray Bloodfather creates a window of escape for himself and Rai.

This brief respite gives our hero and his allies the time they need to evacuate the doomed city but not before a cavalry like no other arrives to sway the tide of battle. No spoilers but what promised to be a titanic battle also delivers a titanic end. You'll have to read for yourself how this pans out for Rai and the gang but suffice it to say this final issue is everything you've been waiting for and doesn't leave you hanging. 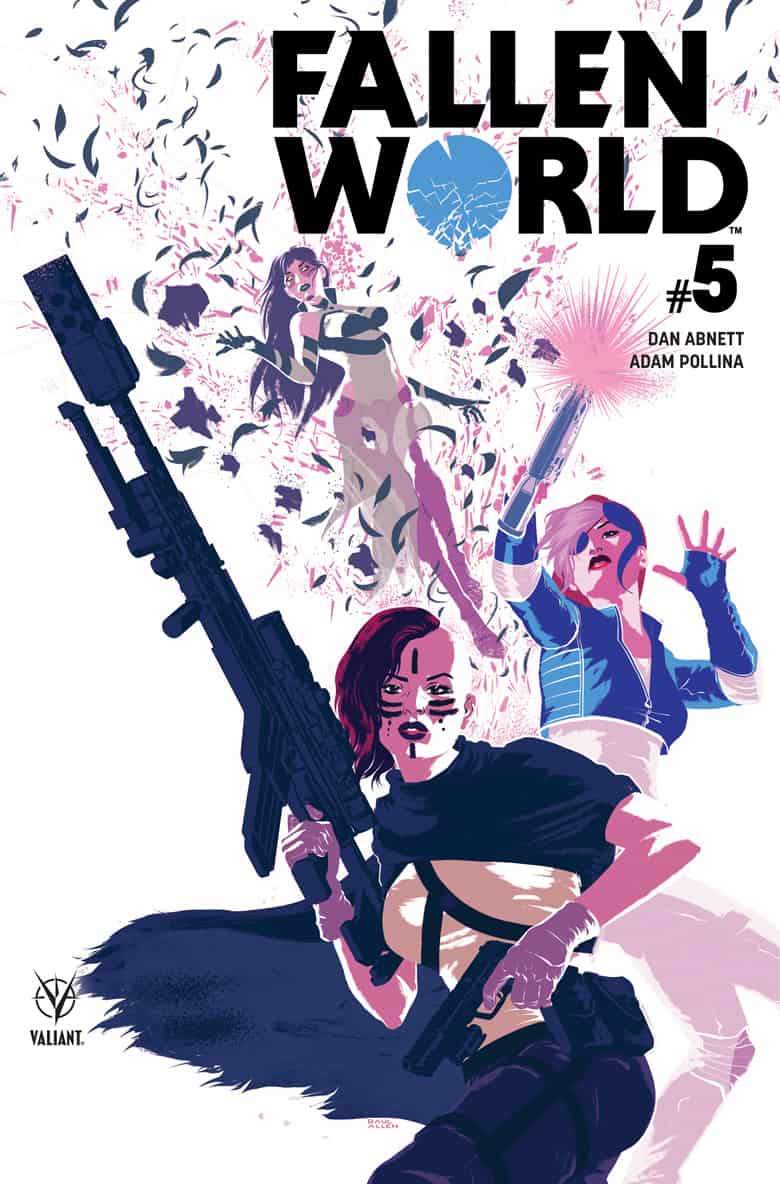 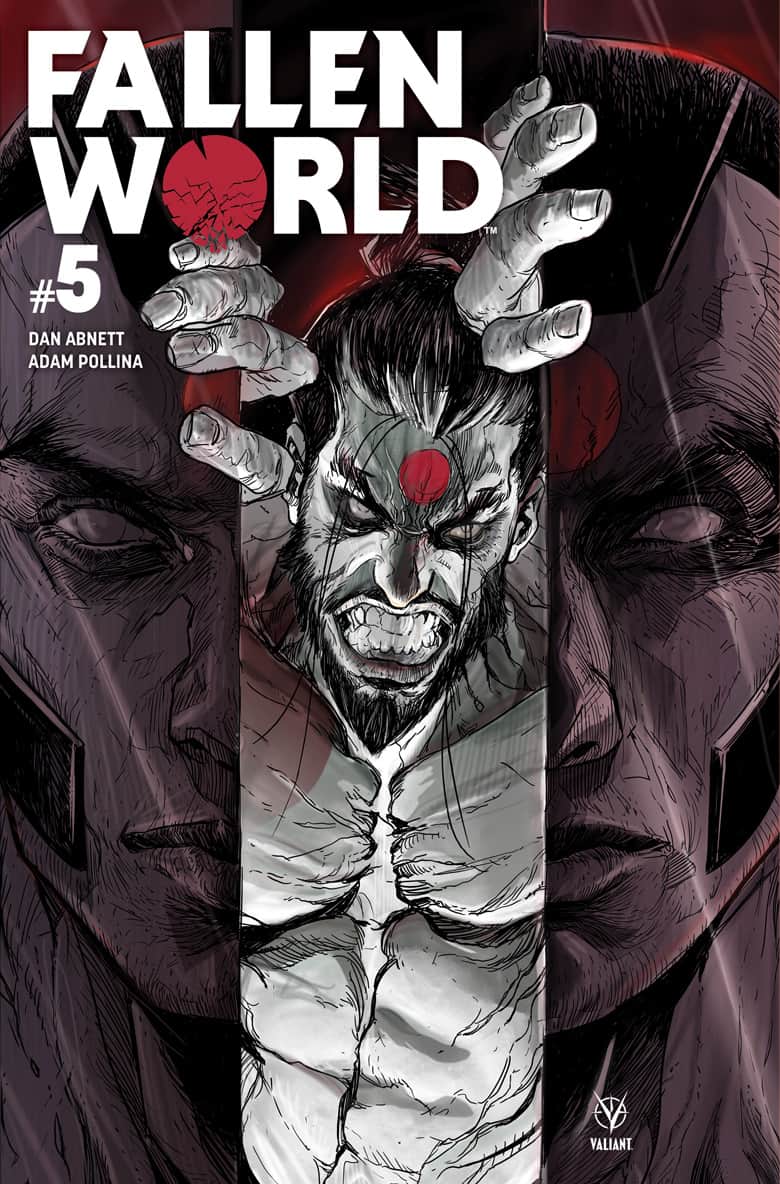 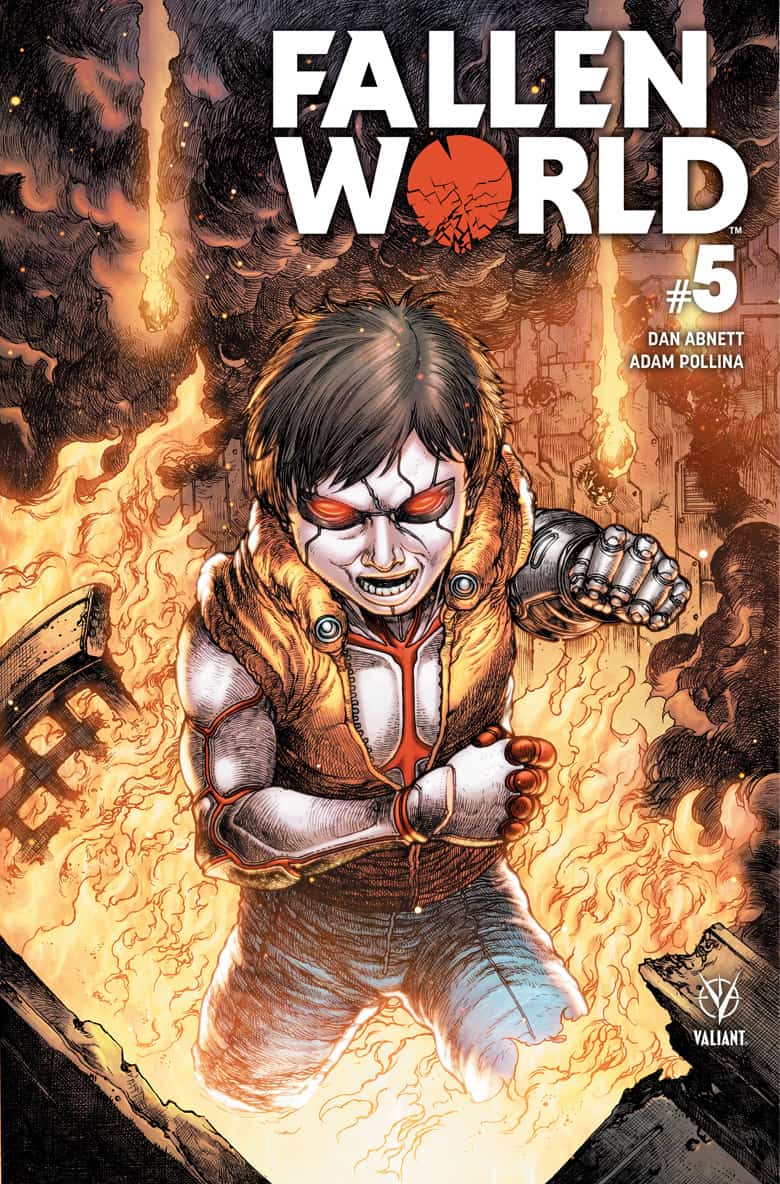 Of all the issues of Fallen World, this one is the swiftest moving. Somehow Dan Abnett finds a way to satisfyingly wrap up this chapter in the history of Rai and Valiant’s future without skipping over essential elements or leaving important things unanswered. Fallen World has had every single issue end leaving you with a dire craving for the next issue, while this one is no different it also satisfies that craving in the short term. 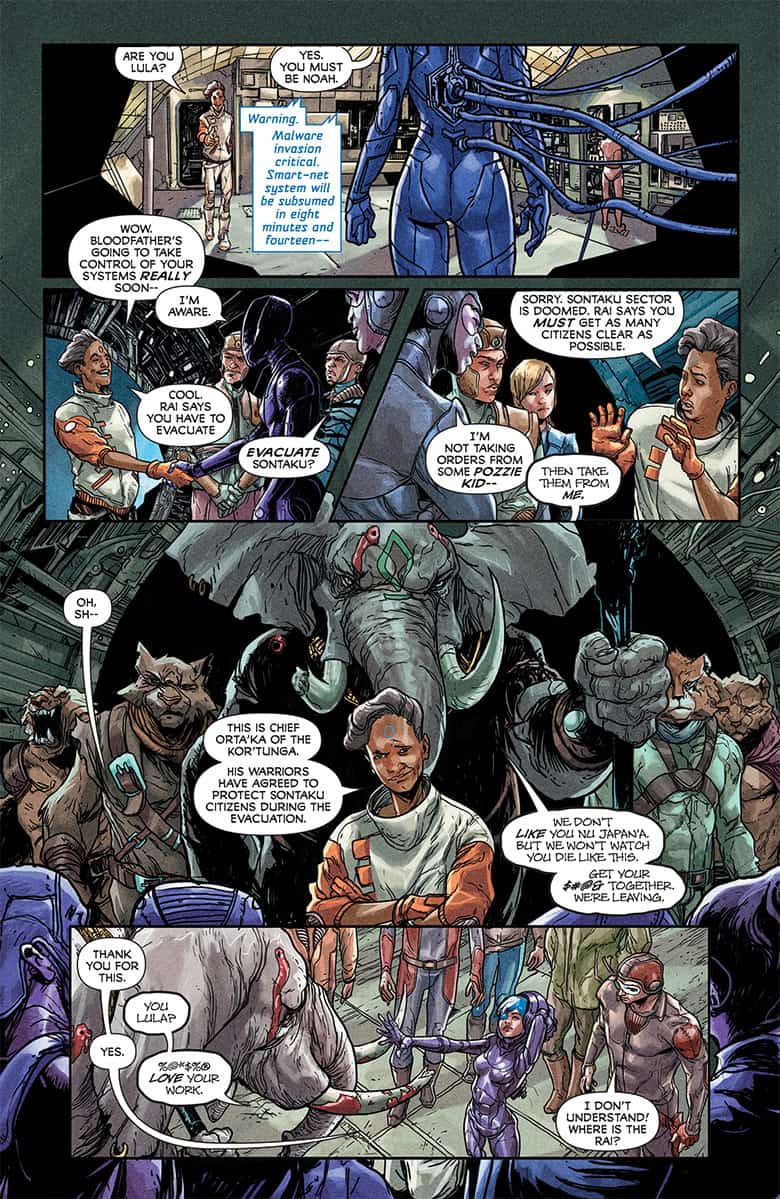 Whether it be 4000 AD or Rai proper there’s also been a sort of “coolness” to it, surgical, metallic even despite how engaging it is. Abnett flips this on its ear by bringing in plenty of Kamandi-esque vibes that are just undeniable in their awesome. The new brother duo of Rai and Raijin already shows great promise as a comedic and an action oriented pair. The interactions between the two beings crafts an entirely new aesthetic to a book that already has a million reasons to read it (I mean bloodthirsty, foul mouthed elephant man crushing all challengers, how can you read that and not immediately want to see what this book is about?).  The coupling of them is also interesting to see their unique charm and personality when it comes to being a Rai. 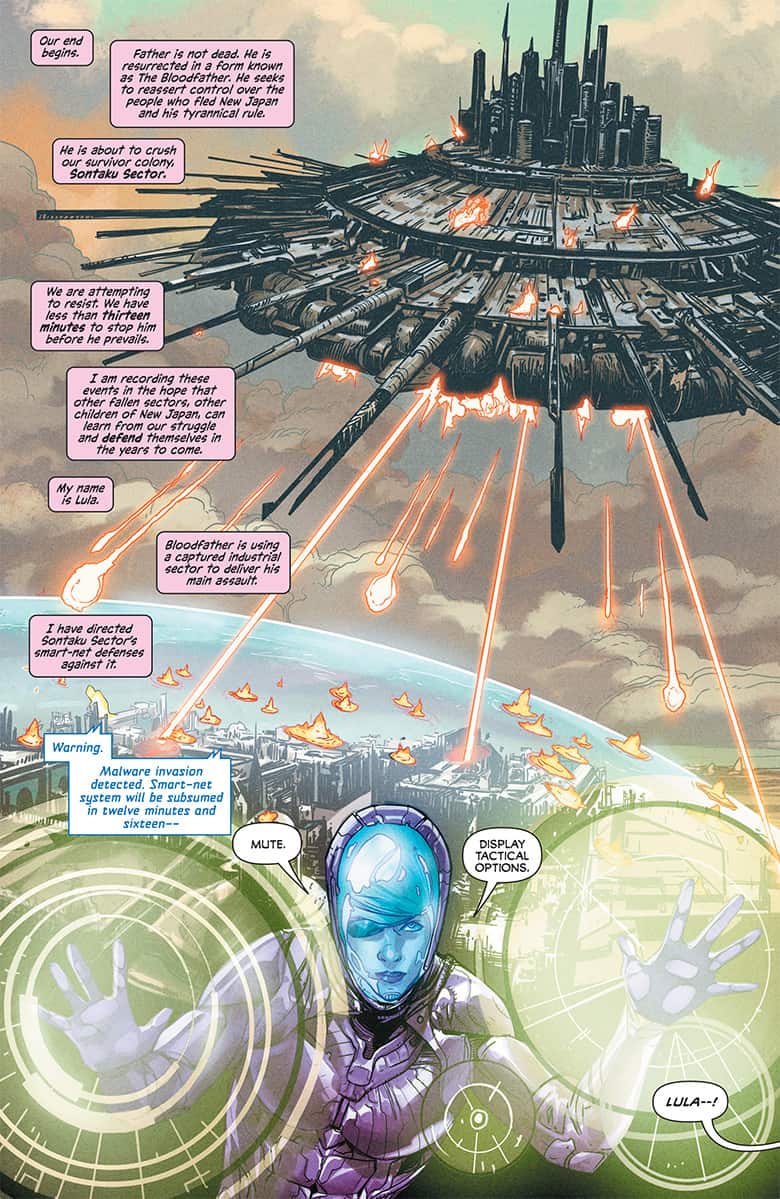 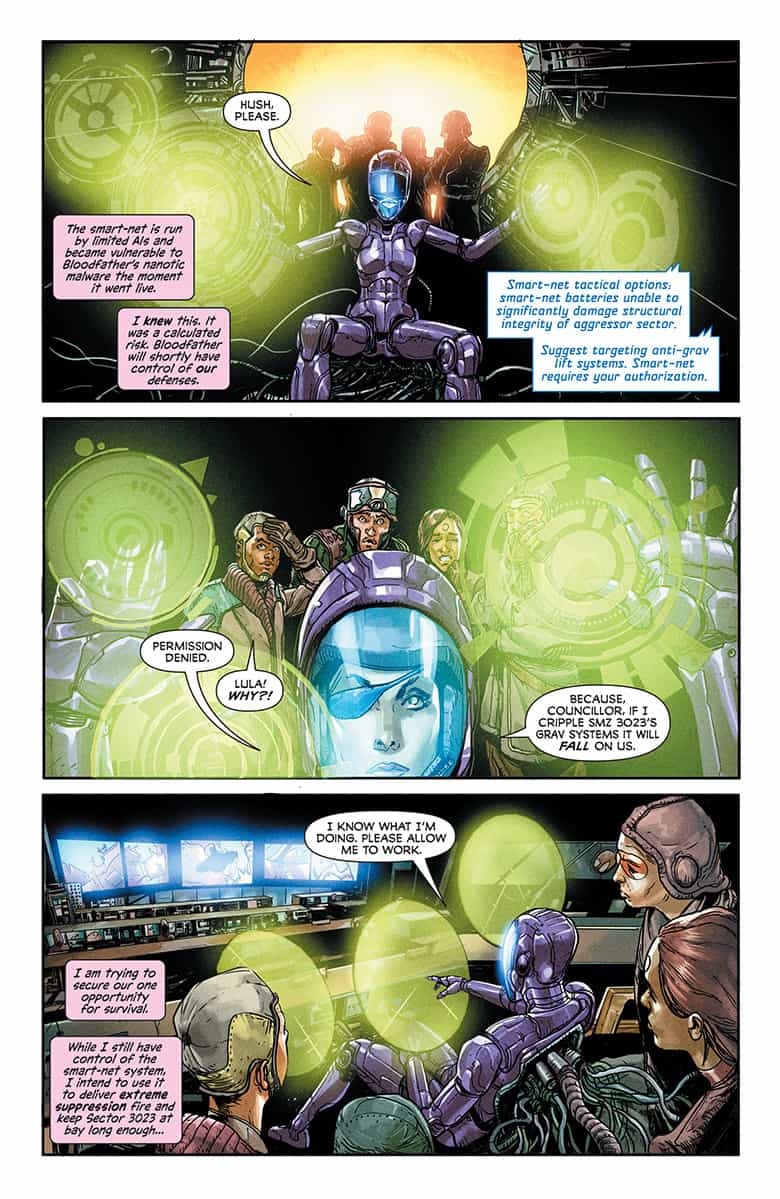 Spoiler alert: Also when Abnett had the Geomancer ride into with the cavalry to save the day, it’s just amazing. In previous issues the Geomancer was a staunch pacifist with her very life in danger of being taken so that another more militant Geomancer could rise in her place. Arriving as she did flexing Geomancy might unlike any power she’d shown before while also sticking to her principles was just a cool tidbit to see thrown in. Abnett has given all the heroes their own special niche and it does nothing but improve the quality of an already amazing miniseries. 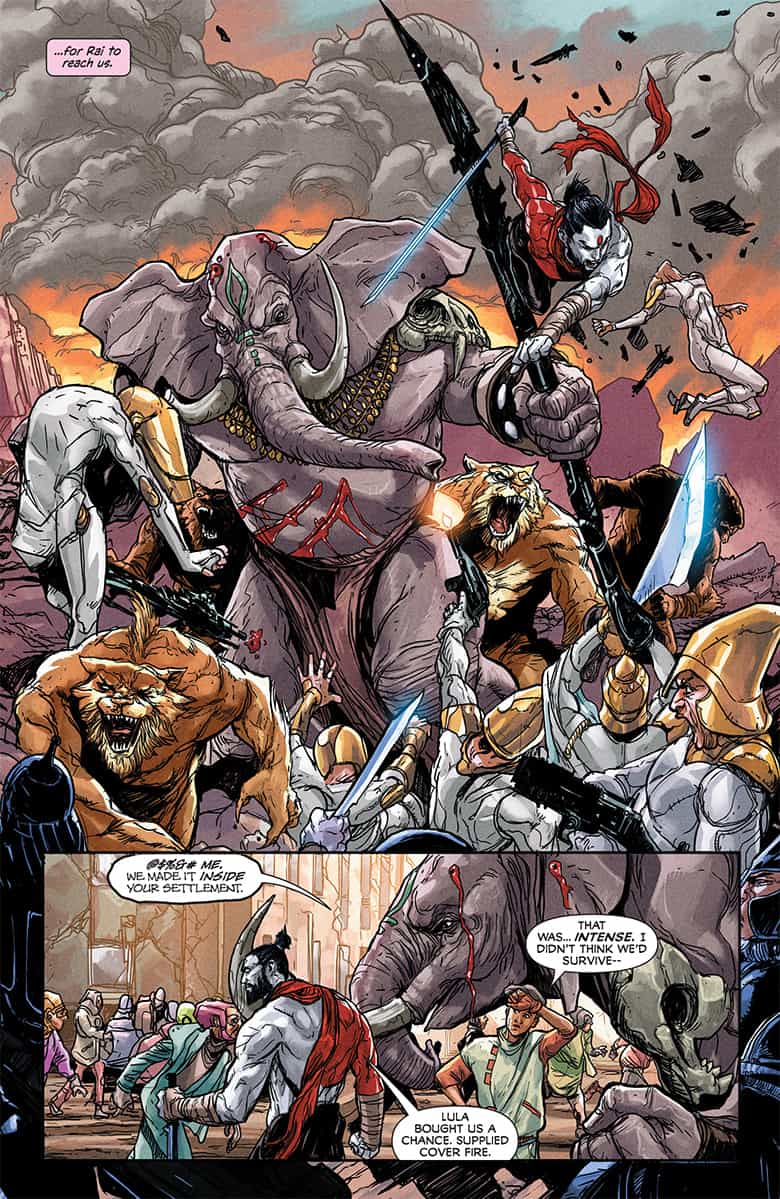 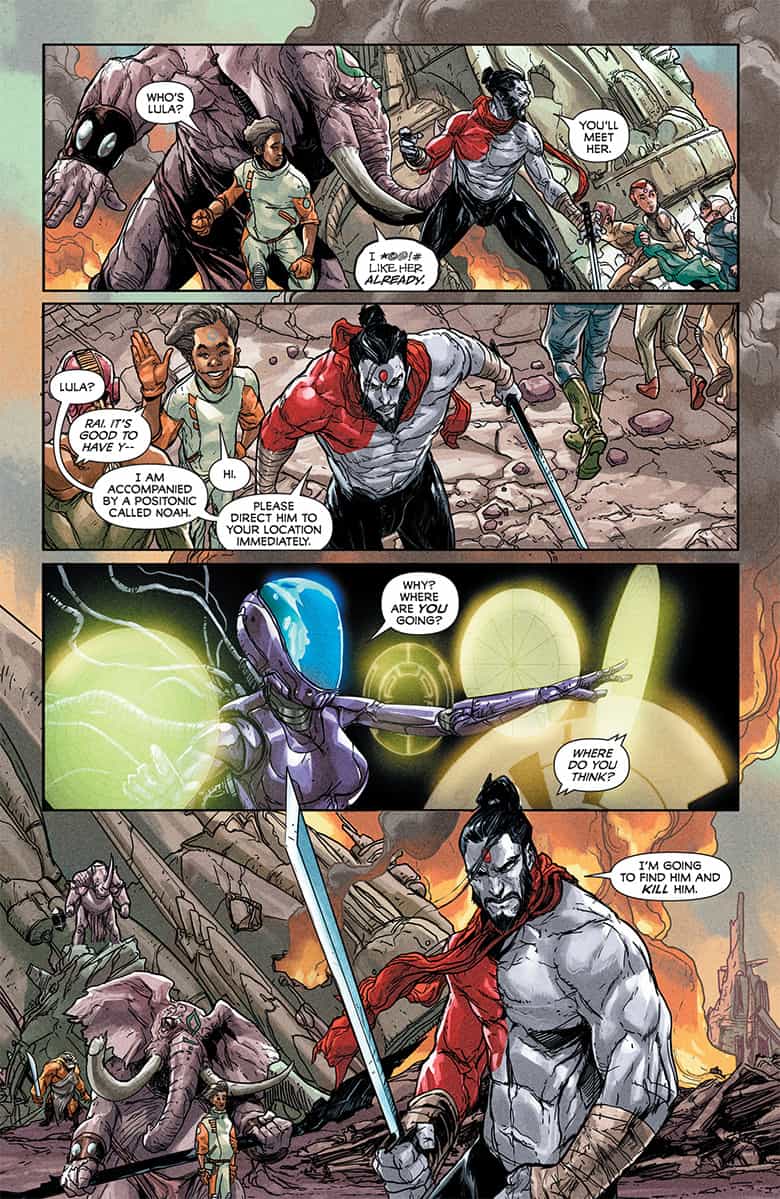 If all that wasn’t enough we get to see a glimpse into the future team up of Rai and Raijin as they journey across the volatile landscape in their almost suicidal mission to kill Bloodfather once and for all. As I mentioned earlier every single issue of Fallen World left you hungry for more so what could be a better pay off than this one ending with the same vibe while also saying “you want it, ya got it!” and delivering what promises to be an outstanding monthly book based in the crazy and intriguing land of 4002 AD Earth.

From the art to the dialogue of each and every panel, Abnett and Gorham hit grandslams all the way through Fallen World. The epic conclusion of this chapter is no exception and gives us the cyberpunk, wandering samurai/ outlaw cowboys, Mad Max war story you didn't realize you needed this bad.