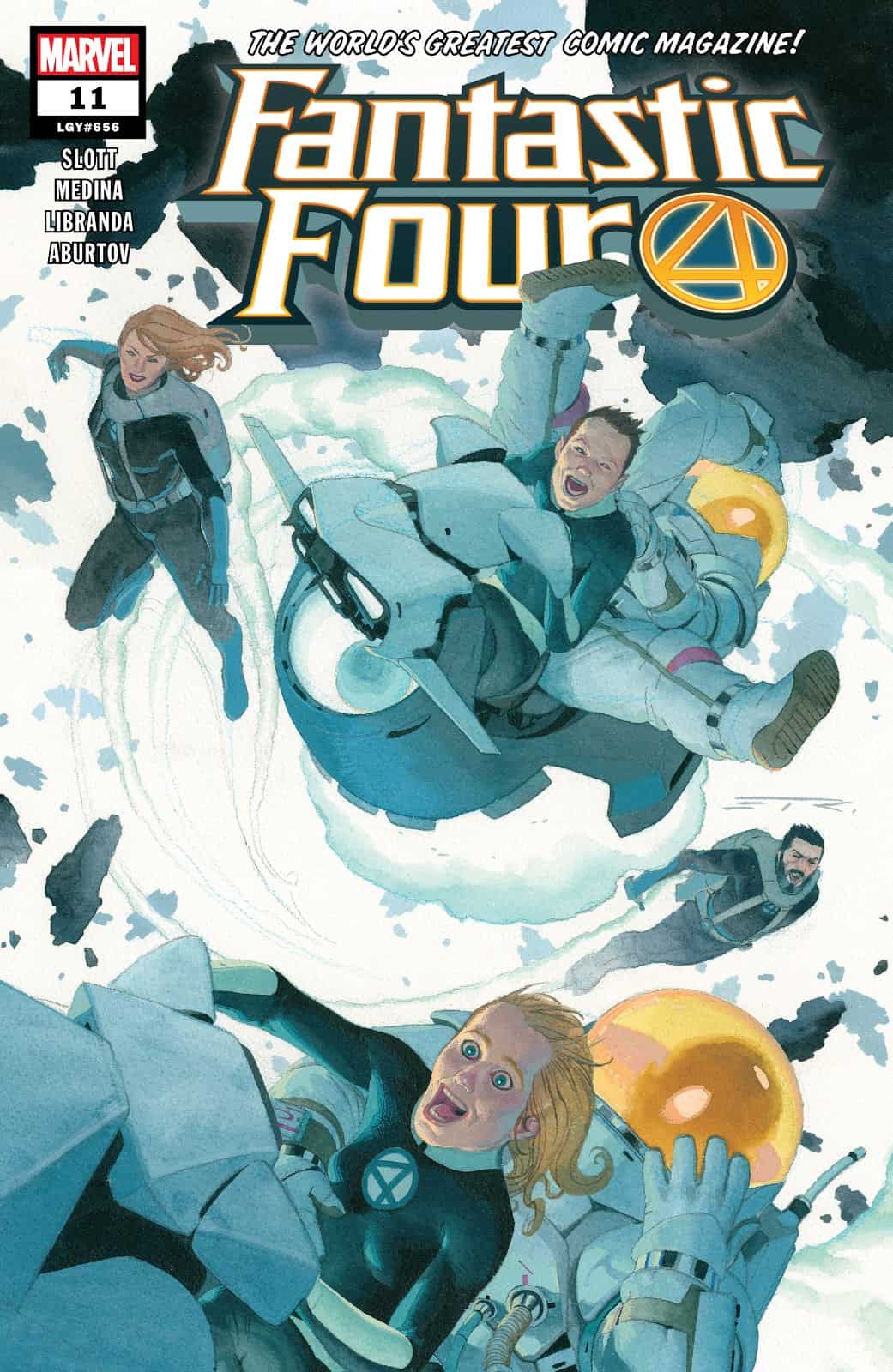 To begin, I misspoke at the end of our riotous review of the last issue.  The latest smackdown between The Thing and The Hulk is scheduled for Fantastic Four #12.  This is Fantastic Four #11 and, while part of it sets up that story, there’s something else going on here, pertaining to the Richards kids and especially Franklin. 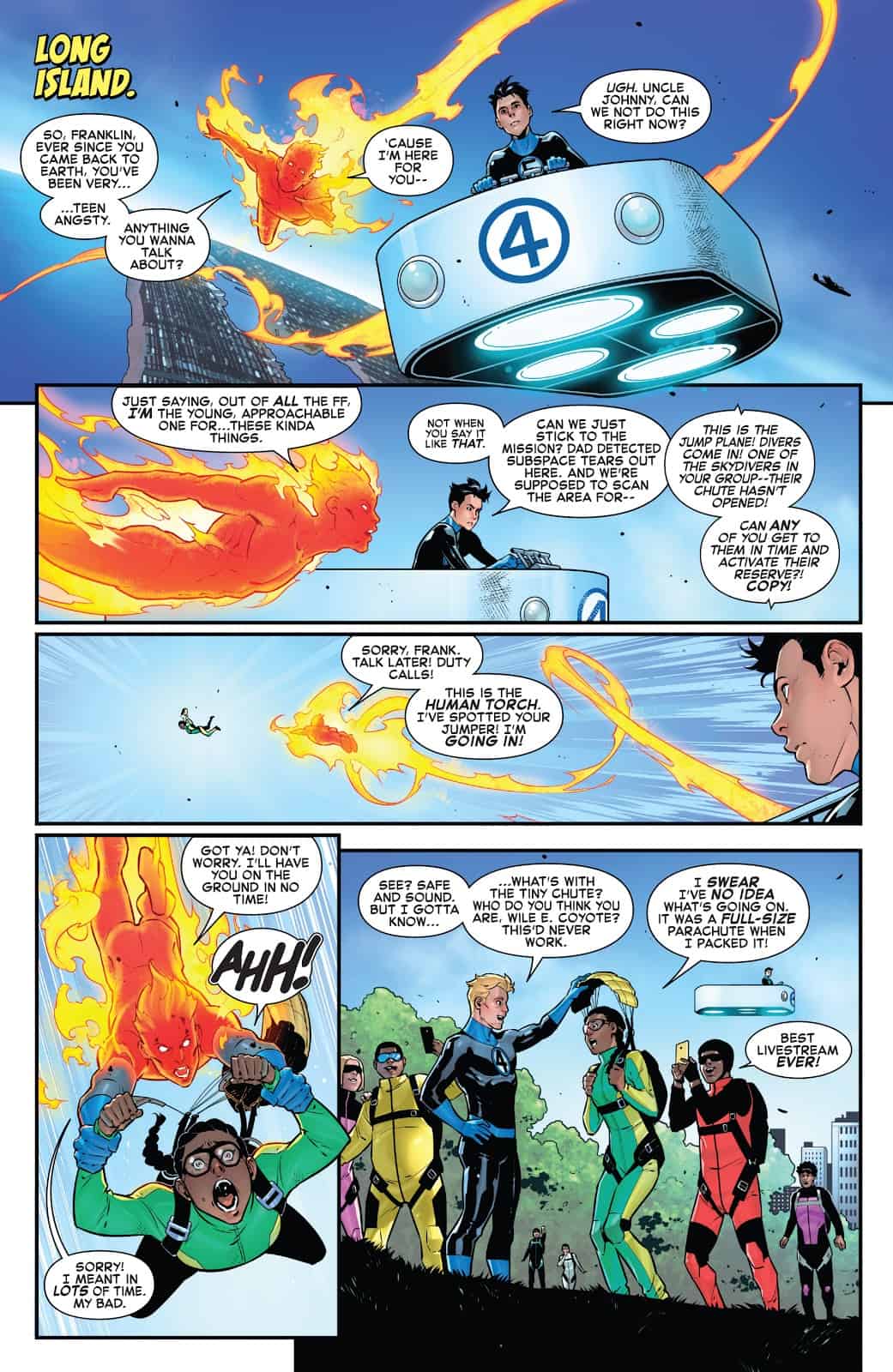 The Torch continues to notice that Franklin is depressed and sullen over the attrition of his once-omnipotent cosmic powers, and just like a teenager, Franklin doesn’t want to talk about it.  But since this is The Fantastic Four, they have bigger things than adolescent angst to worry about (for which we can be thankful).  Strange matter/energy phenomena are taking place all over New York City, and it’s the kind of strange super-science crisis tailor-made for Earth’s greatest heroes.  The Torch correctly identifies the source of the problem when he remembers rescuing a skydiver who thought she packed a full-size parachute, which opened out into the size of a paper towel.  Whatever is going on, it’s coming from the Microverse, that realm of Sub-Atomica and Psycho-Man that has been part of The FF’s adventures since issue #16!

Meanwhile, how about that scene at Coney Island?  When The Invisible Woman cloaks the weird alien crystals that have caused everything to change colors, restoring everyone to their natural coloration, one of the grateful civilians asks her if she can de-cloak it in time for the Pride Parade!  How cool is that?  Do you remember that the very first mention of someone possibly being gay in a mainstream Marvel super-hero comic book was in Fantastic Four #251?  (I’m not kidding; look it up.)  How appropriate that there’s a casual acknowledgement of Pride Month in this of all comics! 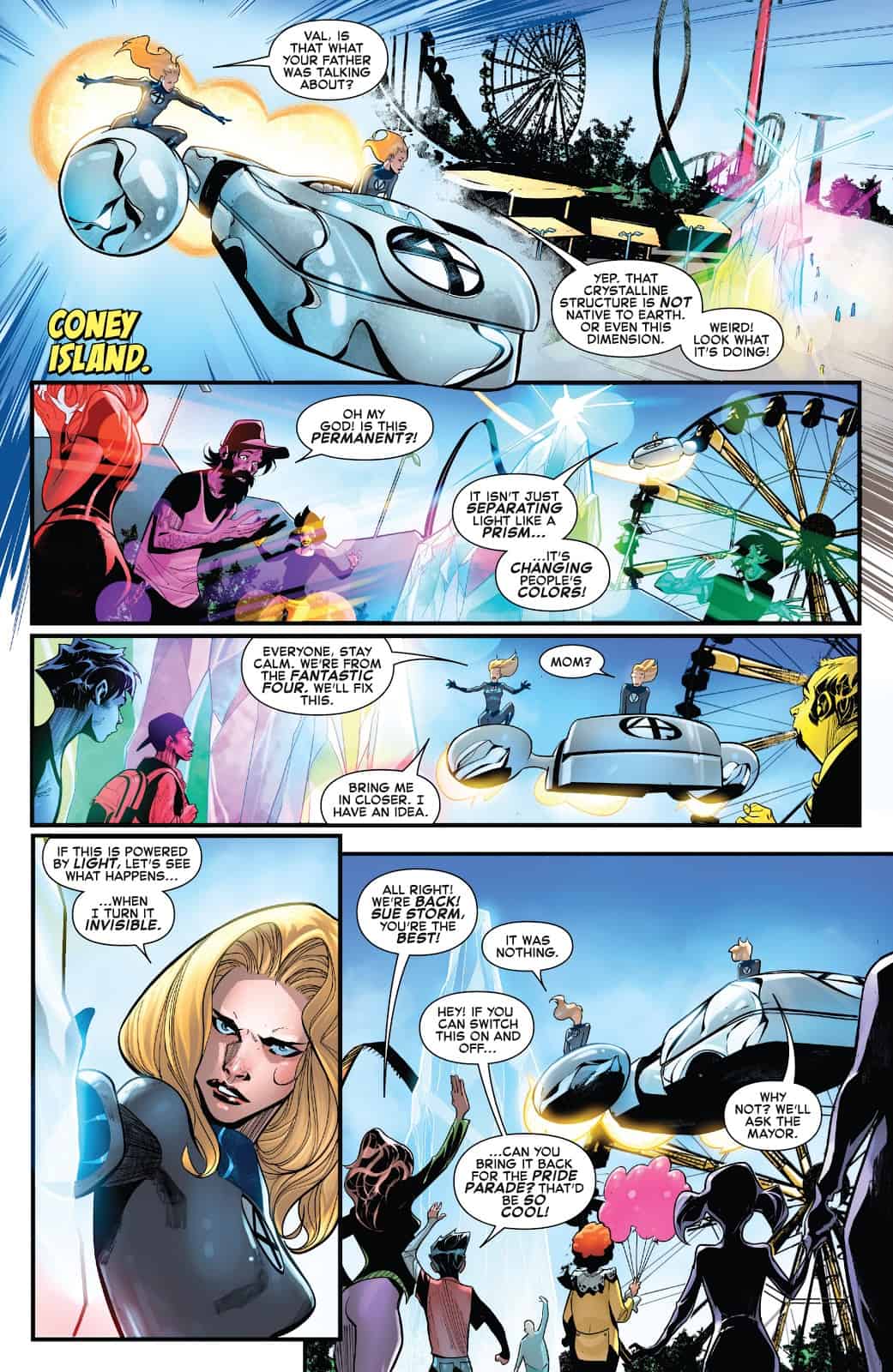 Anyway, the other dilemma before our Fantastic family is that someone at one of the problem scenes called 911 on “a major felony being committed by The Fantastic Four,” who were actually there to help.  (You’d think The FF were a black family or something; this book is getting really timely.)  That brings the authorities to 4 Yancy Street in the form of two agents of the DEMV—Department of Extranormal Motor Vehicles—who are citing the Richards kids for operating the family’s exotic flying vehicles without a license!  Franklin and Valeria are grounded until they’ve passed a road test, meaning they must study everything about The FF’s flying craft and the super-tech of the vehicles inside and out—and Valeria is a much quicker study than Franklin.  Possibly being left out of The FF’s adventures for lack of a super-car driver’s license, as well as his fading powers, is making Franklin ever more resentful and has him fighting with his little sister.  Even a super-powered family is still a family… 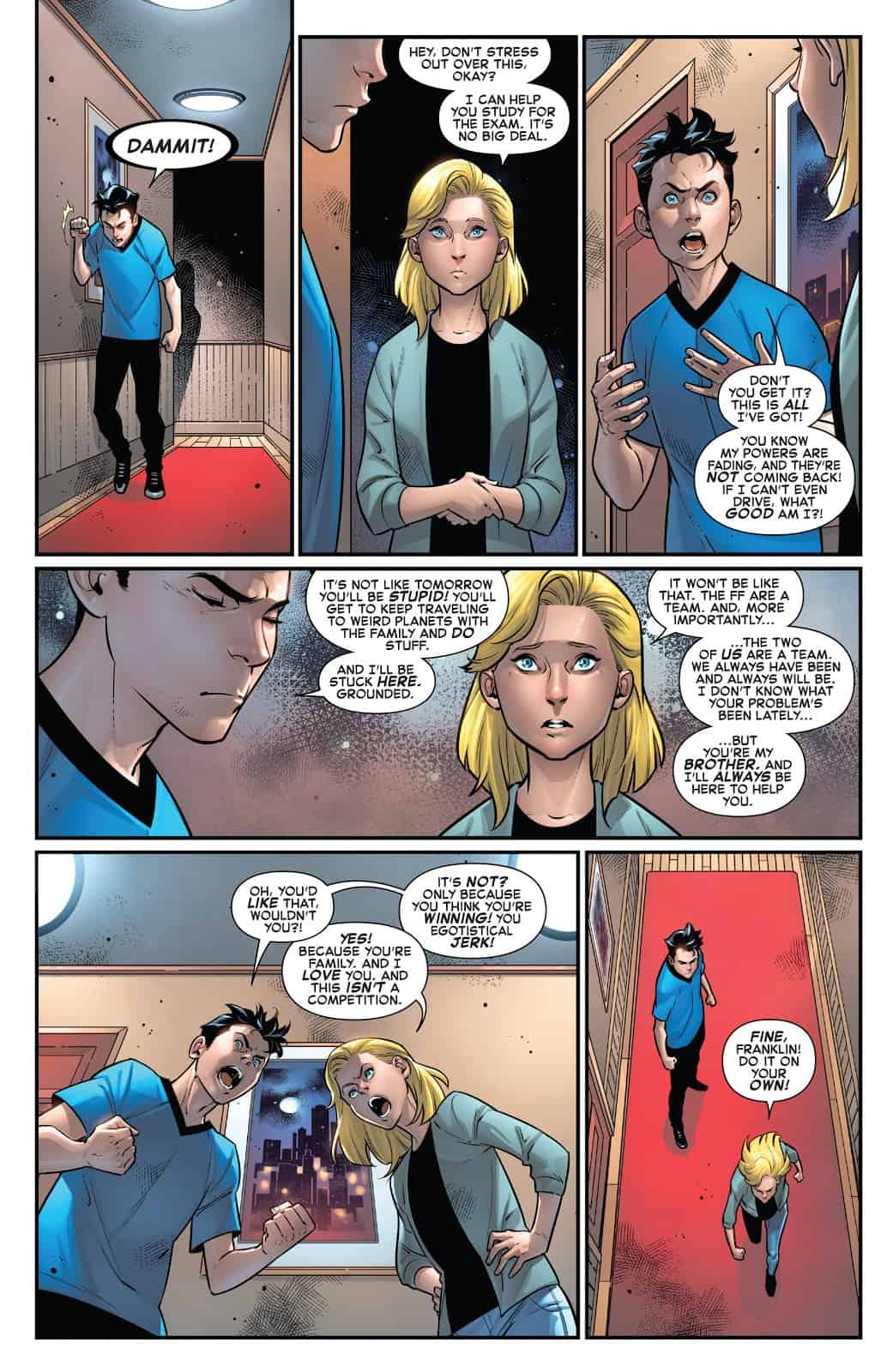 Of course, right during the aerial road test over New York City, the weird phenomena come back, stronger than ever, and the whole family and the DEMV agents get sucked right into them.  The cause of everything is an adversary we’ve never seen before:  Gargantua, Empress of the Infinitesimal!  (And is it just me or does she remind you a bit vaguely of Granny Goodness from Jack Kirby’s Mister Miracle?  Just asking.)  Gargantua’s plan is to “grow” the Microverse into our own universe, obliterating our physical reality in the process!  She calls the whole thing off only when Franklin shows her the photos and videos on his phone of ordinary, mundane reality on Yancy Street.  Thoroughly unimpressed with what she’d be taking over, Gargantua powers down her “dimensional up-sizer” and retreats—so it’s Franklin’s teenage malaise over possibly being rendered less than Fantastic that saves the day! 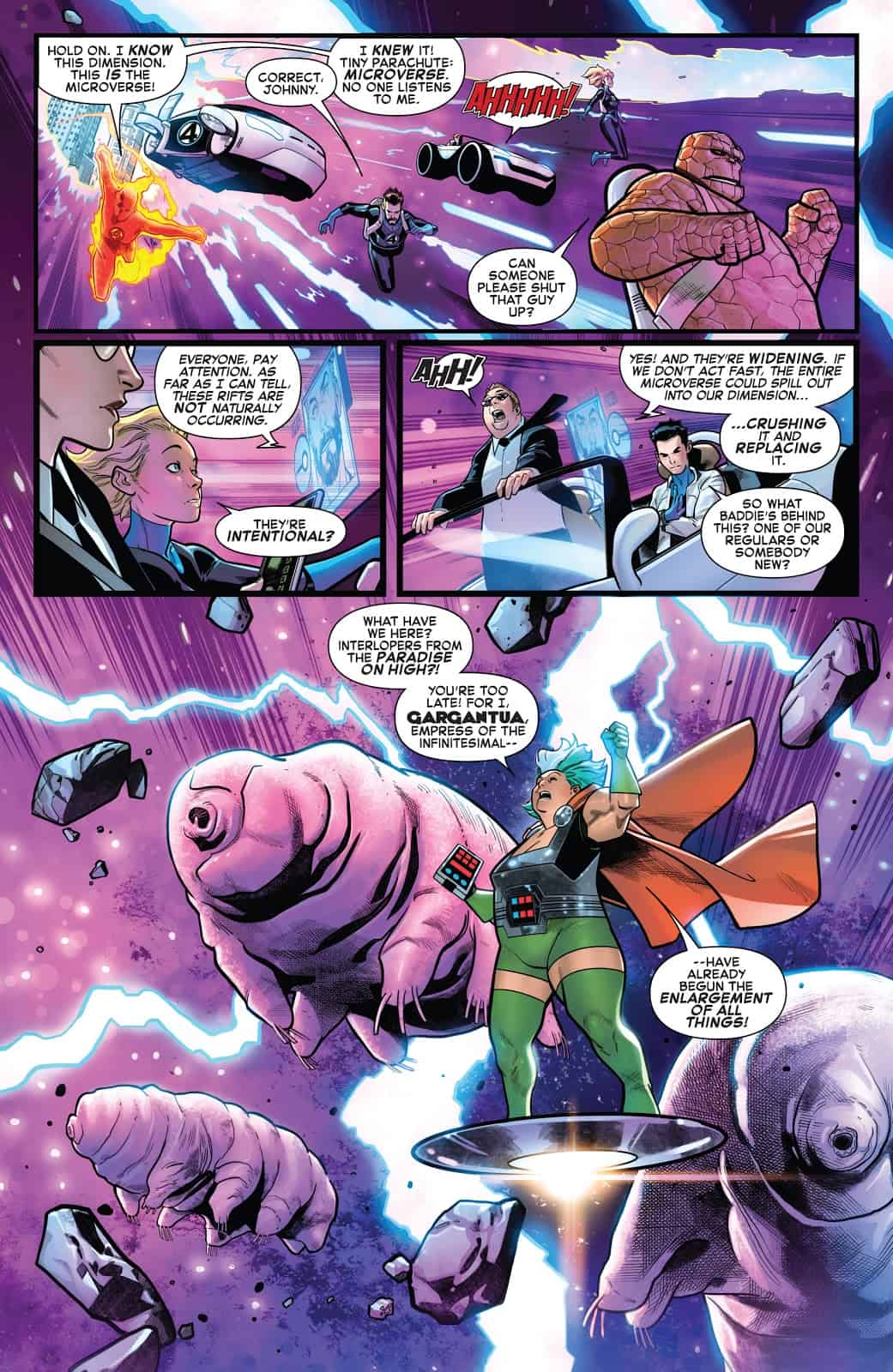 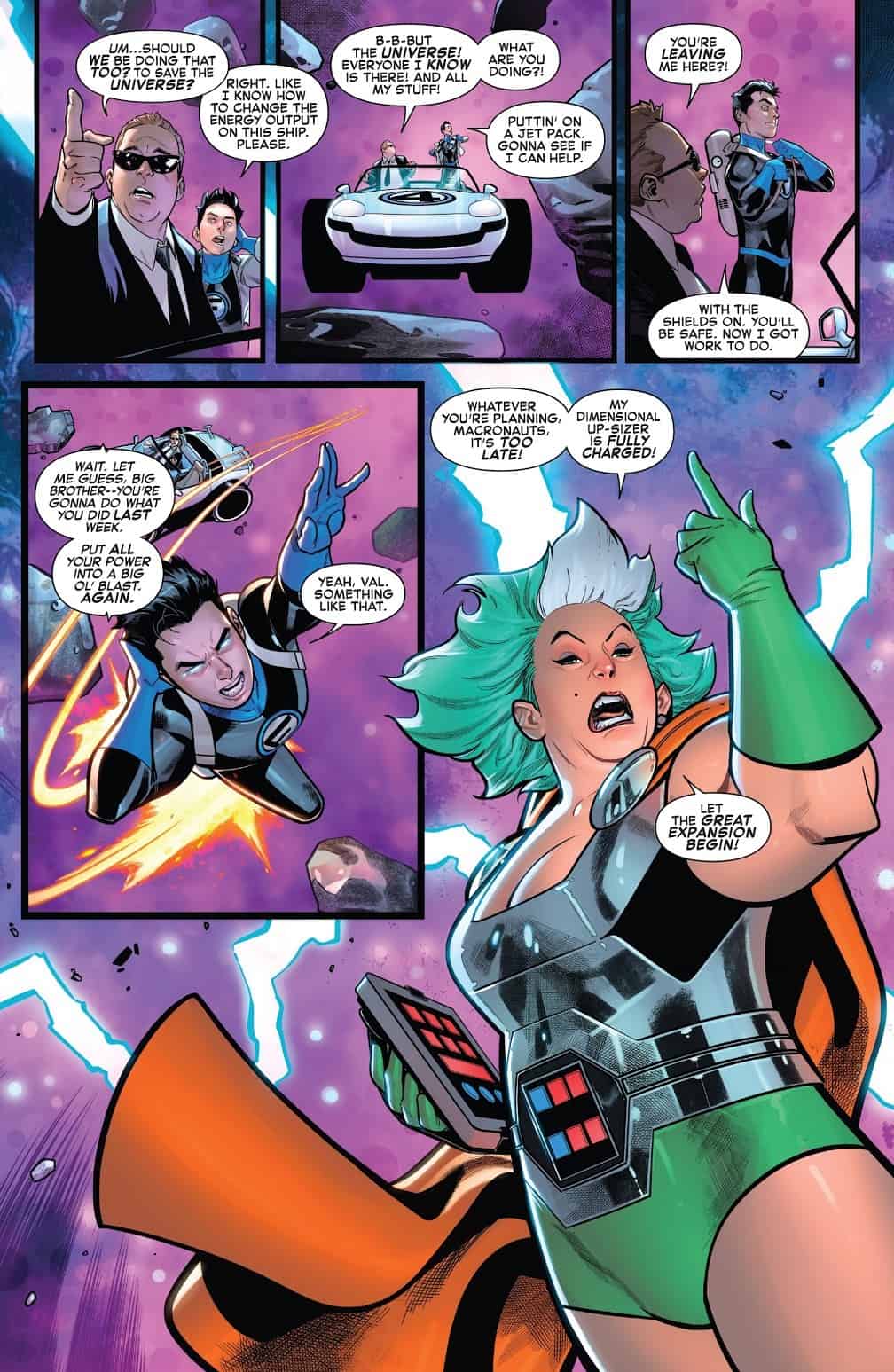 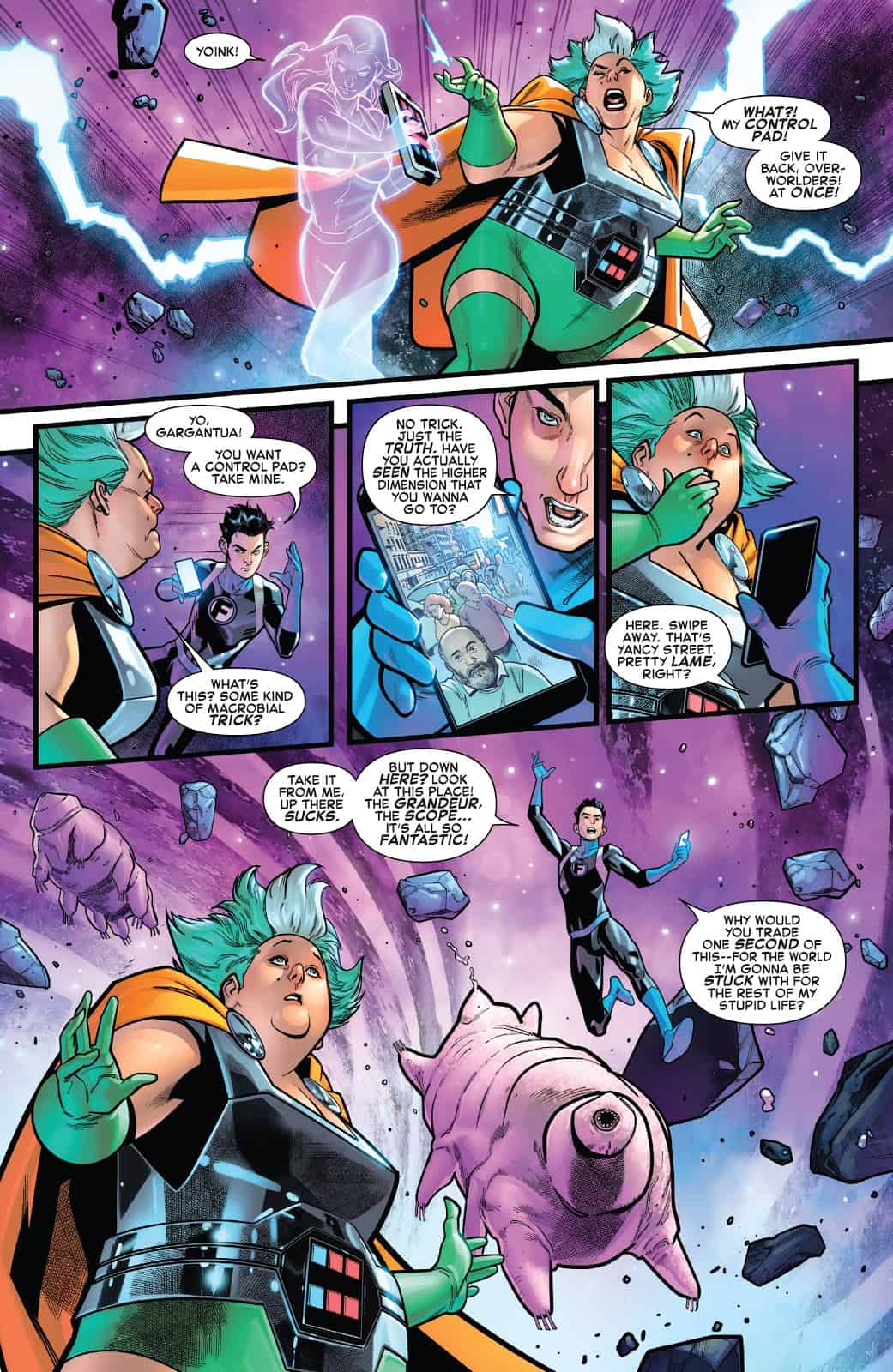 Ironically, though, it is Franklin and not Valeria who passes the road test!  Valeria’s examiner writes her up for operating other super-tech while driving and flunks her, saying she can re-take the test in a year; while Franklin’s examiner passes him for pulling over and seeing to the safety of the examiner, his passenger, first before confronting Gargantua!  So not only did the sullen, angsty Franklin see off the villainess, but he’s the one that gets the license—much to Reed and Sue’s dismay when they realize how much their son takes after his Uncle Johnny!

Meanwhile, in a subplot, Dr. Doom, stewing in wrath against The FF for destroying the infrastructure of Latveria in shutting down his plan to tap Galactus’s powers, has discovered that some of the soil in Latveria is now charged with Power Cosmic—and it has given the Monarch of Evil an idea.  He sends a drone to the super-prison where a certain villain is being held—which thus presents a fresh supply of radioactive clay to The Puppet Master. Doom is aware, of course, that The Thing’s new stepfather-in-law will know exactly what to do with it.  And that brings us to the battle we’ll be seeing next issue! 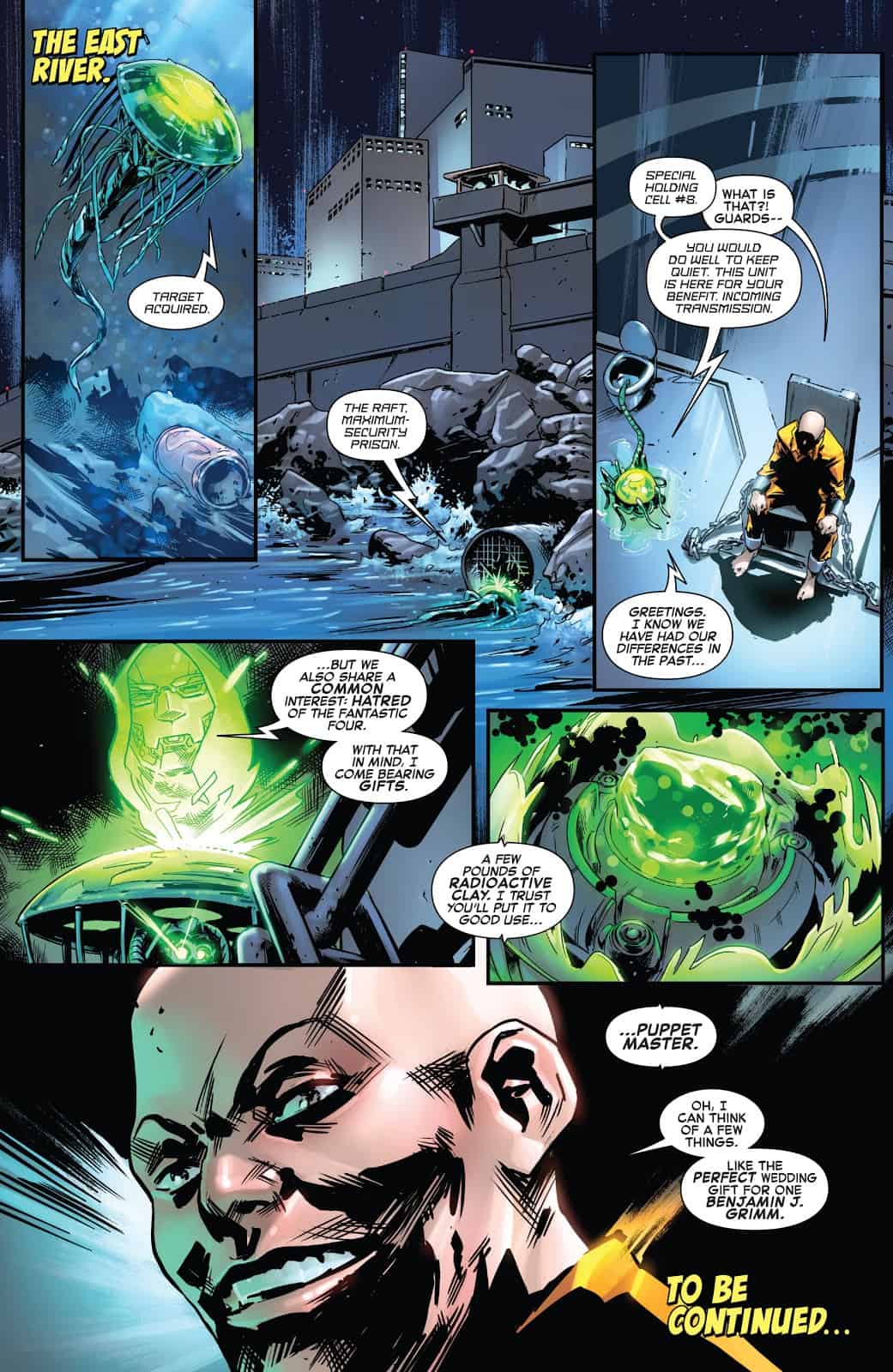 After the epic tale of Dr. Doom trying to use Galactus to create a cosmic energy pipeline, this is the second issue in a row to tell a smaller story.  But unlike last issue’s foray into mythological fantasy spinning out of Thor stories, this issue puts The FF in their accustomed pulp science-fiction milieu.  And this is the second time in the current series that our Foursome has had to tangle with an interdimensional villainess, though Gargantua is a much less formidable and frightening figure than the monstrous, universe-destroying Griever.  While The Griever was a monumental threat, Gargantua was practically a throwaway character who posed only a fleeting danger.  Of course it was a fleeting danger of Fantastic Four proportions, but still…

Artistically, there are a few notes.  Something is really going to have to be done about artists who don’t know how to draw The Thing.  I think perhaps anyone assigned to drawing The Fantastic Four should be put to the kind of test that Franklin and Valeria had to go though to get licensed to pilot Fantasticars.  There should be a required period of studying the way Jack Kirby, George Perez, John Byrne, and Mike McKone drew bashful Ben, then a Thing drawing test, before they’re allowed to start work.  And really, what is it with all the gang-drawn issues, anyway?  Except that they can’t draw The Thing, the current crop of artists isn’t necessarily bad, but why can’t we have just one person on penciling duties for this book and have them stay for the long term?  How much is Marvel paying these people?  This should be more than feasible.  A single regular, long-term penciler who has a proper feel for the look of the characters—especially The Thing—would be welcome on this book.

Also, Reed Richards’s beard is unbecoming and annoying.  They need to get rid of it.

And so, another good Fantastic Four story, well-told, art problems aside, brings us nearly to the end of the first year of the revived FF book.  All the characterizations are clicking, and Franklin’s power problems and their effect on his morale pose an interesting conflict, of which we are surely seeing only the beginning.  Dan Slott continues to lay the groundwork for what may prove to be one of The FF’s most creatively fertile periods.