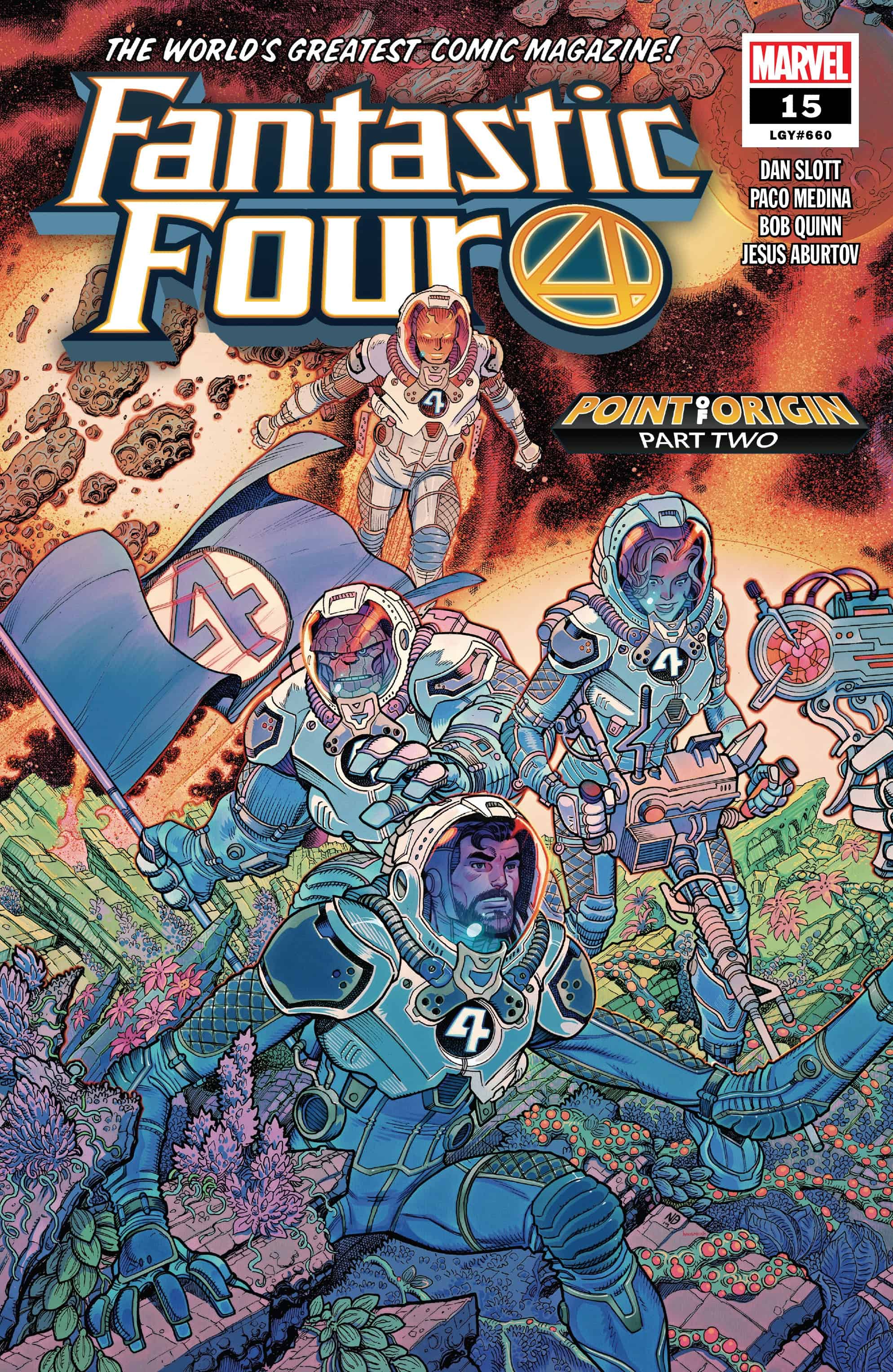 Now this is the most interesting Fantastic Four situation we’ve come across in many a year.  And it’s not even about our Fantastic Four at all, at least not at first.

In the distant star system that Reed Richards was trying to reach when the Marvel 1 spaceship was penetrated by the fateful cosmic rays that turned its crew into The Fantastic Four, there is a planet called Spyre.  The ruler of Spyre is a being called The Overseer.  He has no physical eyes, but his head is surrounded by energy sensors that resemble eyes and give him a kind of omni-cognitive power by which he can see everything about everything on the planet, both physical and non-physical.  The Overseer can even see which individuals are “soulmates,” destined to be coupled for life.

The champions of Spyre and defenders of its people are a hero team called The Unparalleled.  Their leader is called Sidearm; he is human (or Spyrian), but possesses powers like those of the T-1000 Mechanoid in Terminator 2.  Elementa possesses water-manipulation powers and is a conceited, pompous narcissist.  Citadel possesses growth powers like those of Earth’s Giant-Man.  Belter is a geo-telekinetic like Terra in The Teen Titans.  Kor and Kaylo, lesbian soulmates, draw their super-strength, flight, and energy powers from the twin suns of Spyre for whom they are named.  And finally there is Sky, a winged girl whose powers are comparable to those of Skylark in The Squadron Supreme.  Citadel believes that Sky will one day be found to be his soulmate, but Sky isn’t so sure.  Remember that; it’s going to be important.  With me so far?  Good.

Spyre has a terrorist problem, which seems to be related to grotesque creatures who inhabit the planet’s nether reaches and which The Unparalleled have been handling.  But it also has a prophecy of alien invaders who will come to destroy their civilization.  These invaders are known throughout the civilized universe as…The Fantastic Four!  For many years, the people of Spyre have listened to the prophecy of the coming of The Fantastic Four, and dreaded the day the aliens’ ship would arrive.  The Unparalleled have awaited it as their ultimate challenge.  One day, the alarm sounds, warning of the approach of the powerful alien quartet, and The Unparalleled take to the sky to meet the threat.

In the ensuing battle, Sky uses her sonic powers to knock out and capture The Human Torch—whom she cradles lovingly in her arms, telling him that they already know each other.  The Thing is knocked over the border wall of the planetary capital and descends into a dank underworld populated by hostile monsters.  And Mr. Fantastic and The Invisible Woman—after Reed has used a universal translator device to enable The FF to communicate with The Unparalleled—are taken before The Overseer, who realizes that the Earth explorers are not a threat after all.  The Overseer has Reed and Sue fitted with arm manacles that signify that they are to be assimilated into Spyrian society, to remain on Spyre as part of their “perfect society” forever! 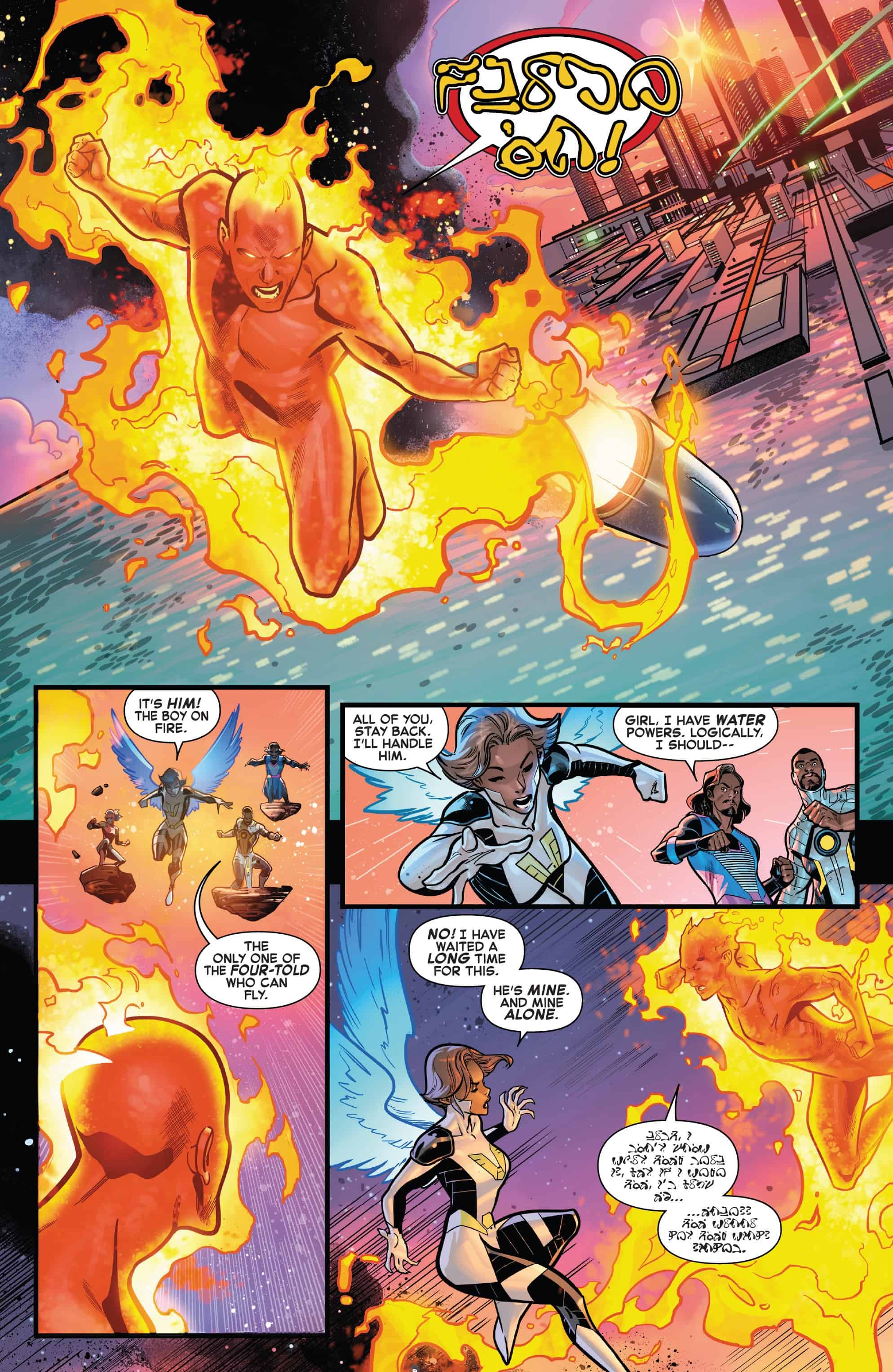 Meanwhile, Johnny wakes up naked in Sky’s bed except for a manacle on his own arm, which the hovering alien female tells him is the symbol of their relationship—as destined soulmates!  To say the least, our Human Torch is more than a bit surprised.  They’ve never even been on a date!  But we have a date to learn more about all of the above, next issue!

As we remember from last issue, the star system where the planet Spyre is located is where Reed wanted to go in testing his experimental star drive on the Marvel 1, a mission which was thus aborted when a potent penetration of cosmic rays forced the ship to crash back on Earth with Reed and his crew mutating into The Fantastic Four.  But as we discover this issue, the people of Spyre knew they were coming, or that they would come some day, and awaited that day with dread!  The apocalyptic prophecy of “The Four-Told” became a part of their culture and religion, and their Overseer even created a hero team against it.  The questions become how the Spyrians knew that their planet was Reed’s destination and why they so feared The Fantastic Four.

Of course, The Fantastic Four are known throughout the civilized universe.  Repelling the attempted invasion of the Skrulls and seeing off Galactus is bound to give one a reputation!  So why don’t the Spyrians see The FF as what we know they are, the best of the universe’s good guys?  This, and the about-face (pardon the expression) of The Overseer, suggests that this planet’s populace is being manipulated.  And further, Spyre, with its monster underworld, seems to have a dysfunctional and volatile caste system that reminds us of The Inhumans and the Alpha Primitives. 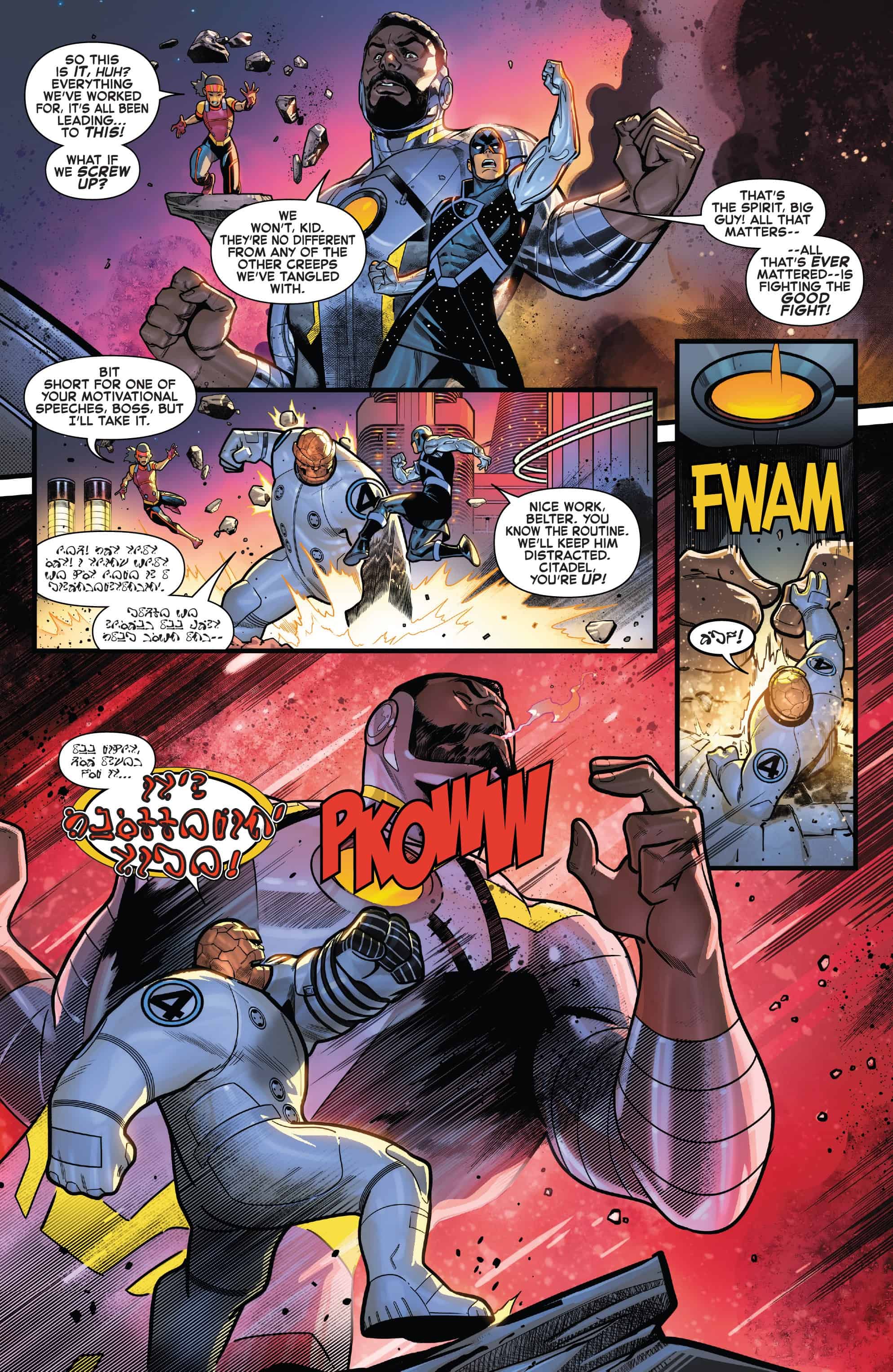 That’s not the only familiar thing about this new FF saga.  There’s also this “soulmate” business with Johnny and Sky.  Longtime Fantastic Four readers would not be off-base in thinking this is another “Johnny and Crystal” in the making.  You remember how that went.  “Boy meets super-powered girl from another civilization.  Girl belongs to a group of other super-powered people who at first have an antagonistic relationship with The FF.  Boy and girl fall in love, but fate separates them and they long to be together again.  Boy spends the subplot for most of the next year trying to get back to girl.”  We’ve been here before, except…

This time there are some other wrinkles in it.  This other character, Citadel, obviously wants Sky for himself and thinks the two of them ought to be soulmates, though The Overseer doesn’t seem to have declared them such.  (Or has he?)  From what we’ve seen about this arrangement, it’s one that Spyrians tend to welcome and embrace—but Sky does not seem terribly interested in being soul-mated with Citadel.  She seems more than a little interested in having that with our Johnny, going so far as to strip him naked and put him in her bed!  And that brings us back to last issue, and the flashback of how driven Johnny was to qualify for the original space mission.  Remember how single-minded and determined he was to be on that ship, and how he plowed through the rigorous training like a boy possessed?  Remember the way we learned he felt, as if there were some great destiny calling to him from across space; as if he needed to be out there?  Think of that, and think about Sky and her own feeling that she and Johnny have always known each other on some level.

Yep, this is “Johnny and Crystal” again—but this time with a “destiny” and a rival!

That, however, begs another question:  What about Victorious?

Back in FF #6-9, there seemed to be the beginnings of a sexual tension between Johnny and Dr. Doom’s new cosmic-powered enforcer.  She covered it with hostility towards The Torch and loyalty to Doom, but it was very obviously there.  So is anything going to come of that?  What exactly is Victorious’s future as a character in The Fantastic Four, especially since Doom himself is being spun off into a book of his own with a storyline that will take him in a completely different direction from his role as the arch-foe of Earth’s greatest heroes?  I thought it was part of Dan Slott’s agenda to make Doom an even greater threat to The FF than before, and the things that happened in those issues seemed to be setting him up for that.  I also thought Victorious was going to be the new romantic complication in Johnny’s life.  (As complications go, it’s hard to top having Dr. Doom’s enforcer as our Torch’s potential new lover!)  Doom’s new series and everything that I’ve read about it seem to be upsetting and pre-empting that story, and if that’s true, it’s a disappointment.

This is why I generally dislike the idea of making villains the stars of their own comic books.  Dr. Doom needs to be “home,” plotting against and menacing The Fantastic Four, not galavanting around in other stories.  What is Victorious supposed to do now?

Returning to our present story, however:  FF #15 utilizes an unusual story structure, starting out as if it’s an issue of The Unparalleled instead of The Fantastic Four.  Reinforcing this is the plot device of bringing in The FF as the “big threat” and not even having them speaking English until Reed gets the translator working, making it seem as if our heroes are outside characters entering an issue of someone else’s series.  Making The FF a “foreign, alien” element and the seeming adversaries of The Unparalleled at first helps to establish The Unparalleled effectively on their own terms before reverting to the actual structure of The FF being the stars of the book.  The story of Spyre takes our Fantastic Four to a fascinating new world and brings intriguing new characters into their lives; characters whom Dan Slott says will be a major part of The FF’s stories going forward.  While the members of The Unparalleled are not original characters at all in concept, their virtue is that they and their world will bring a newness and a sense of discovery into the book, which is something this series has been missing for years.  This is in keeping with the spirit of exploration that is a hallmark of The FF, the series with a tradition of expanding the Marvel Universe.  I look forward to learning more about these characters, their origins, where they came from, and how they will affect the future of The Fantastic Four.

And, if The FF are going to be assimilated into the world of Spyre, The Overseer needs to do us all a favor, at least, and make Reed shave off that damn beard.

Where does the prophecy about The Fantastic Four come from, and will The FF become a part of the world of Spyre forever?  Will The Thing be overrun by the monsters of the planet’s underworld?  Why does Sky think The Human Torch is her soulmate, and what will Citadel have to say about that?  These questions and many others will be answered in the next issue of The Fantastic Four!