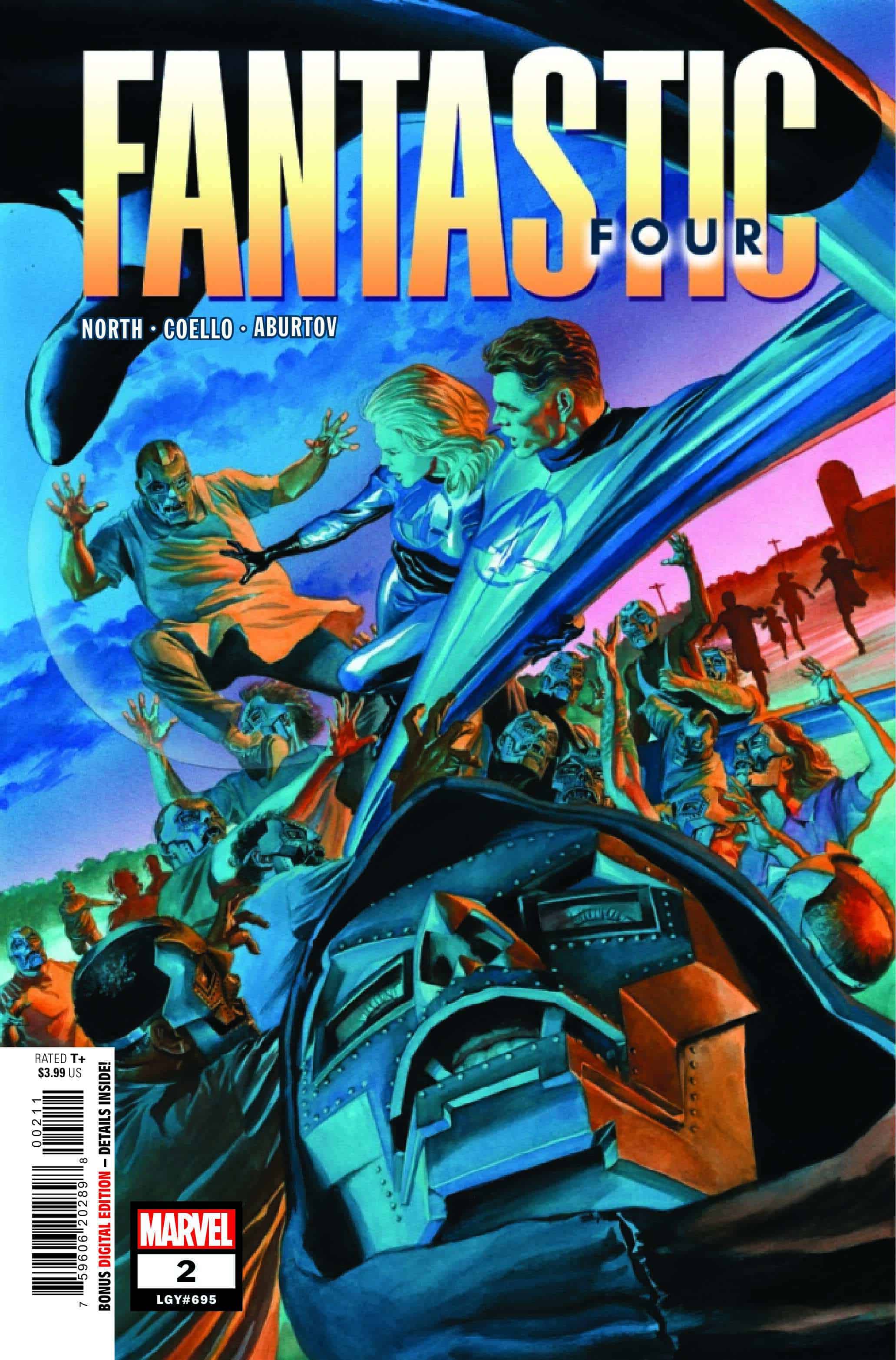 Reed and Sue are on the run from - well, a lot of things, actually! Things are not going great for the Fantastic Four. But they find themselves in even more trouble when they stop in a small town with a terrible secret! That terrible secret is revealed literally on the second page of this issue, and Reed and Sue spend the rest of the issue trying to survive it, but stop reading here if you don't want it spoiled... Yep, it's Reed and Sue versus a town full of killer Doombots.

Some mystery stories–perhaps most mystery stories–center solely on uncovering the truth and the characters are moved about primarily in the furtherance of that goal. But then there are mystery stories where learning the truth is almost secondary to exploring how the characters have been affected as a result of the event and eventually the truth is revealed by following those characters. Fantastic Four is so far following the latter course. The first issue told a story about Ben and Alicia, on a road trip away from the rest of the team, who end up helping a small town. Fantastic Four #2 centers on Reed and Sue in a story that somewhat mirrors the first issue’s plot.

Fantastic Four #2 opens on Reed and Sue eating in a diner. Like Ben and Alicia they seem to be far from New York. North clues us in a little more on whatever happened back in the city (hinted at by the building sized crater on the last page of the first issue). Their building is gone, and their money is gone. When Reed starts to wallow in self-recrimination, Sue reminds him that they are a family (both literally in their case and metaphorically in the sense of the larger team) and she insists that it’s no one’s fault–or, if it is Reed’s fault it is also hers.

But once they reveal their identities their lunch is interrupted by Doombots. In short order they discover that the town they stopped to eat in is populated entirely by Doombots. This revelation leads to an unexpected story about Doom’s youth and a promise fulfilled.

It’s interesting that the first two issues of this run of the series mirror each other in the way they do. The Fantastic Four are scattered–exactly why we do not know. But on their separate journeys (at least in the case of these two pairs) they find themselves in a position to help strangers with surprisingly emotional problems. It’s a nice reflection of how the series is so often about the bond of this extended family. So here, even though the Fantastic Four family is scattered, North maintains a sense of family in the stories he is telling.

North continues unraveling the mystery of what happened to the team and their building in a patient, roundabout way. Despite the ominous scene from the end of the first issue, North never lingers on the event or its consequences. It’s easy to forget that there’s a mystery at all, and in large part it’s because there isn’t the sense that the characters’ actions are solely reacting to it. For instance in Fantastic Four #2 Reed and Sue don’t feel defined by what happened. There is never the sense from the issue that their actions are a direct result of what happened and so consequently we don’t find ourselves frustrated by not understanding their motives or by dialogue that cleverly avoids the topic of what happened. It’s very well done.

Given the small scale nature of Fantastic Four #2, it cannot be overstated how integral Coello and Aburtov’s art and colors are to making the story work. There’s a brief fight with Doombots, and that’s fun enough, but this story rests entirely on human emotion. Coello captures that perfectly in how he draws Sue and Reed (and a couple other characters of import). He does such a good job capturing the humanity at work here. Whatever the event was that scattered the team and destroyed their building, it hasn’t dampened these characters’ spirits and Coello makes that abundantly clear.

Aburtov likewise contributes to this sense with fairly soft hues throughout the issue. Sure, there are Doombots, but the environment never feels menacing. Even the darker night time scenes have a kind of warmth to them. There really is a visual sense that everything is going to be okay in the end.

Fantastic Four #2 is a wonderful story about two people who love each other and, more than anything else, are always eager to help others. That sometimes gets lost in this series (especially when it comes to Reed) because giant, occasionally crazy plots take center stage. Also, some writers, in portraying Reed’s intelligence, will leave him feeling somewhat cold. But North really humanizes the characters here, and I expect reinforcing that feeling will be important down the road when we find out what happened to the Fantastic Four.