Fantastic Four #32: One Human Torch, Too Many Women 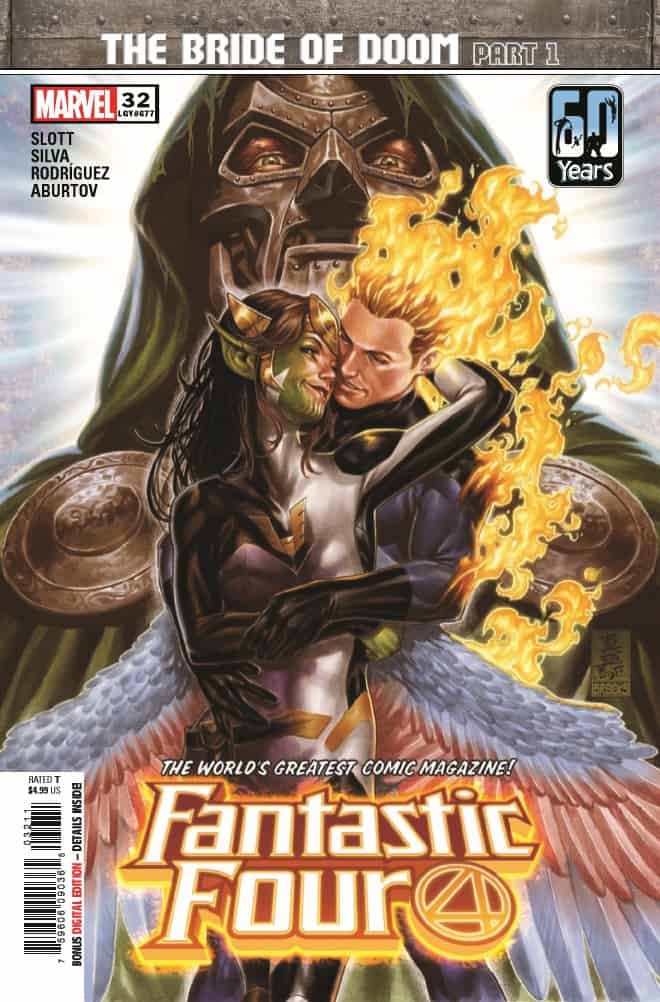 For the last couple of issues I’ve had a bad case of Really Tired and Life Getting in the Way.  But the good folks at Comic Watch were still willing to let me come on and chat up “The World’s Greatest Comic Magazine!” with the 60th Anniversary gearing up.  So let’s get right to it and begin by bringing us concisely up to speed about FF #30 and 31.

FF #31:  The world (and the entire published output of Marvel Comics in another “event”) came under attack by a plague of Venoms.  The Symbiotes thus possessed the Human Torch, the Thing, and Sky, forcing Reed and Sue to battle Johnny and Ben.  The Symbiotes also got Valeria, pitting Franklin against his sister.  The Symbiotes tried to push Reed, Johnny, and Franklin’s psychological buttons, preying on emotional vulnerabilities, until they and all the Venoms were defeated in King in Black #5, which I didn’t read.  (Sorry, these “events” don’t manipulate me into buying comics I’m not interested in, as they’re meant to do.)  The possessed Thing had tried to torment Reed with that glimpse of the future in which Reed did something so awful that the Thing murdered him.  Reed and Ben bonded over forgiveness, while Johnny and Sky bonded over their “soulmate” bond, even as Sue continued her creepy practice of invisibly spying on Johnny.  (I hope she wasn’t watching at the end of FF #32, but we’ll get to that.)

FF #32:  To continue working on their friendship, Reed and Ben took a jaunt through the Forever Gate.  When Alicia wanted to take N’Kalla and Jo-Venn to her studio to learn to sculpt, it brought up a secret that has gone unexplained since last summer.  While N’Kalla was in training as a warrior, she would take breaks in the stasis vault where the Skrulls kept beings from other planets whom they had replaced with Skrull operatives.  This turned out to be during the period when Lyja had thus replaced Alicia, so N’Kalla would meditate on the real Alicia as her special “angel.”  This explains the way the Skrull girl has responded to Alicia ever since they met in Empyre last year.

Meanwhile, Reed and Ben found themselves in a universe where thoughts and physical reality are entangled, as in the Star Trek episode “Where No One Has Gone Before.”  The Wizard’s son, Bentley, who is infatuated with Valeria, used the Forever Gate to go to Prince Arboro’s planet and punch him out for wanting Valeria to join his “harem.”  (I still think Valeria should be too young for boys anyway.)  The Wizard looked on approvingly in a subplot that foreshadows the FF being bothered once again by this Reed Richards wannabe who created the Frightful Four.

Because Bentley messed with the Forever Gate, Reed and Ben were stuck in the thoughts-to-reality universe, where they battled effigies of past villains and were once again confronted with that ominous future where Reed’s actions cause Ben to murder him.  Reed finally figured out how they could wish themselves home just in time for another family dilemma over Franklin’s insecurities about his power loss.  Franklin has thus entered therapy—not with Doc Samson, the character who usually treats super people with mental health issues (e.g. the Hulk), but with the mutant called Trauma, who possesses the power to morph into whatever is troubling someone else.  In their session, Trauma transformed into another Franklin Richards, and the Richards lad began to unburden himself.  We’ll have to look forward to what comes of that.

And now for Fantastic Four #32, and the most startling developments since the Invisible Woman cloaked Dr. Doom’s mask and armor with the whole universe watching.

After another obnoxious cover with the logo at the bottom (I wish they’d stop doing that), the Torch, in the new Baxter Building under construction, is on a video call with Crystal about the Latverian gala that he is about to attend.  (Crystal has a depressing haircut.  Why does every heroine who gets a makeover have all her hair lopped off?)  During the call, Luna chimes in.  Did you know Crystal’s daughter has the power to “read auras?”  That’s just very “New Age,” isn’t it?  Anyway, what Luna “reads” in the Torch’s aura is that he is about to make a disastrous choice and “screw everything up.”  Which brings us to that big party at the Latverian Embassy.

It’s an exhibition of art and artifacts from Dr. Doom’s country, and the hostess of the event is Doom’s enforcer, Victorious.  The Torch attends with Sky and the Thing comes with Alicia and the kids.  Sky tells Johnny to stop his bantering with Victorious, while Johnny wonders why he is not picking up anything about Sky’s emotions through their Spyre armbands.  (Warning…)  There is, of course, a reason for this.  That’s not Sky that Johnny is escorting; it’s Lyja in Sky’s shape.  When the real Sky walks in, claiming "Alicia" told her the gala was tomorrow night, the jig is up.

Alicia manages to get Ben and the kids out of there before something else is up.  Namely, the Latverian Embassy is attacked by members of Ultimatum, a group of anti-Doom insurrectionists.  The Torch, Sky, Lyja, and Victorious all end up battling Ultimatum, during which the attacking villains are the only thing stopping the women from turning on each other in a cat fight.  When Lyja insinuates that Sky is too sheltered, provincial, and stupid for Johnny (she actually uses the word stupid), worse hell breaks loose in the form of Sky’s sonic cry that knocks everyone present for a loop.  That wraps it up for Ultimatum, but in the wake of the battle, a representative of the U.S. State Department orders Victorious to leave the country and the humiliated Sky takes off, wanting some time without Johnny to think things over. 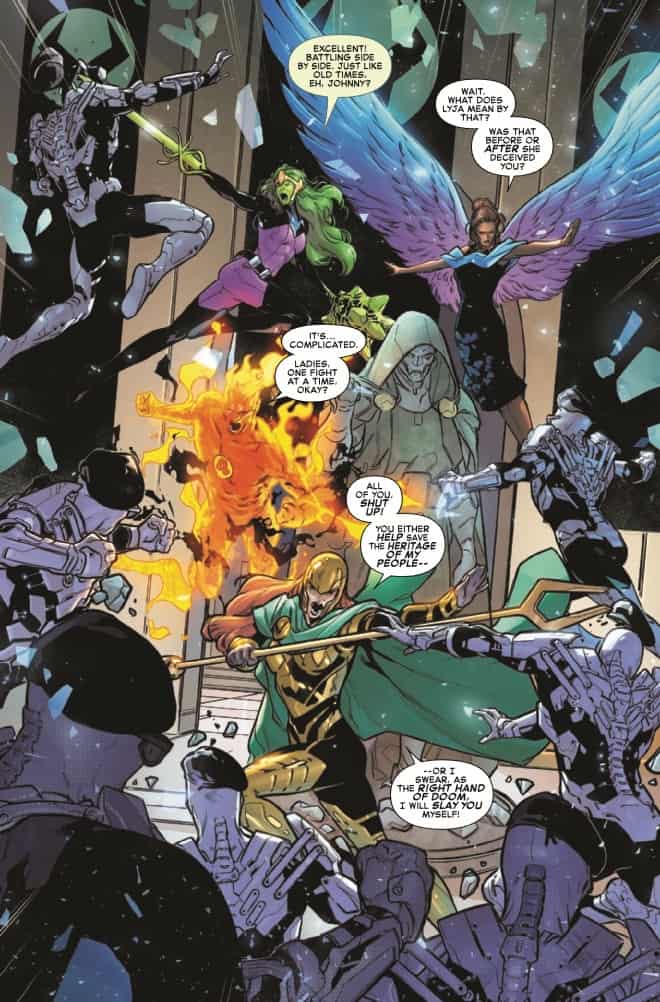 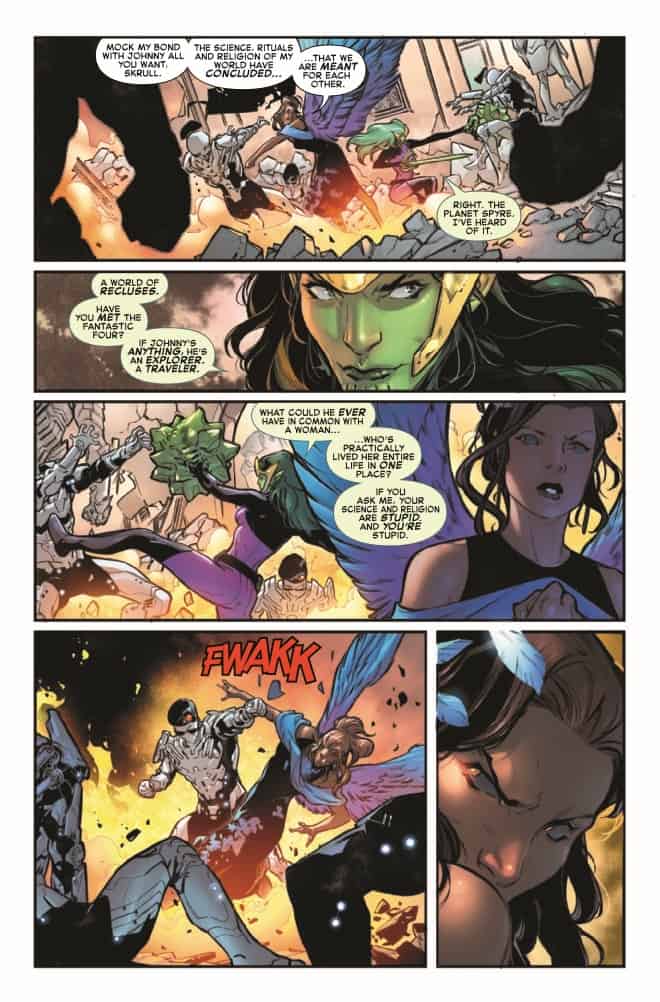 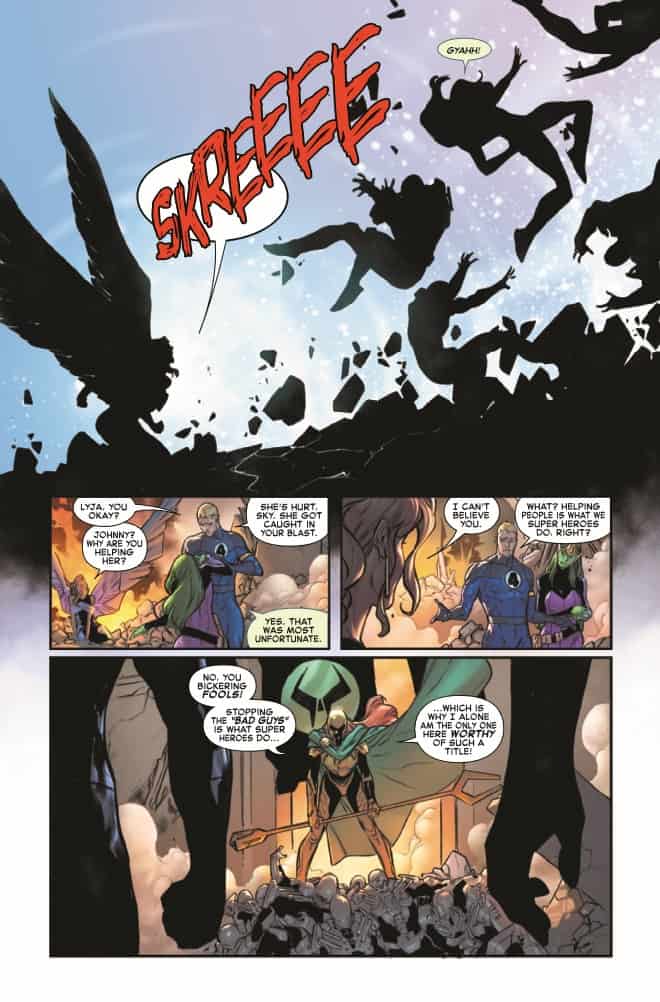 Johnny calls out Lyja for the gross and cruel deception that was the basis for their entire relationship and marriage.  Little does anyone know that Lyja agrees to return to the Skrulls—because Alicia is thus controlling her with her stepfather the Puppet Master’s radioactive clay, shaped into Lyja’s likeness!  Alicia, girl, we didn’t know you had it in you…. 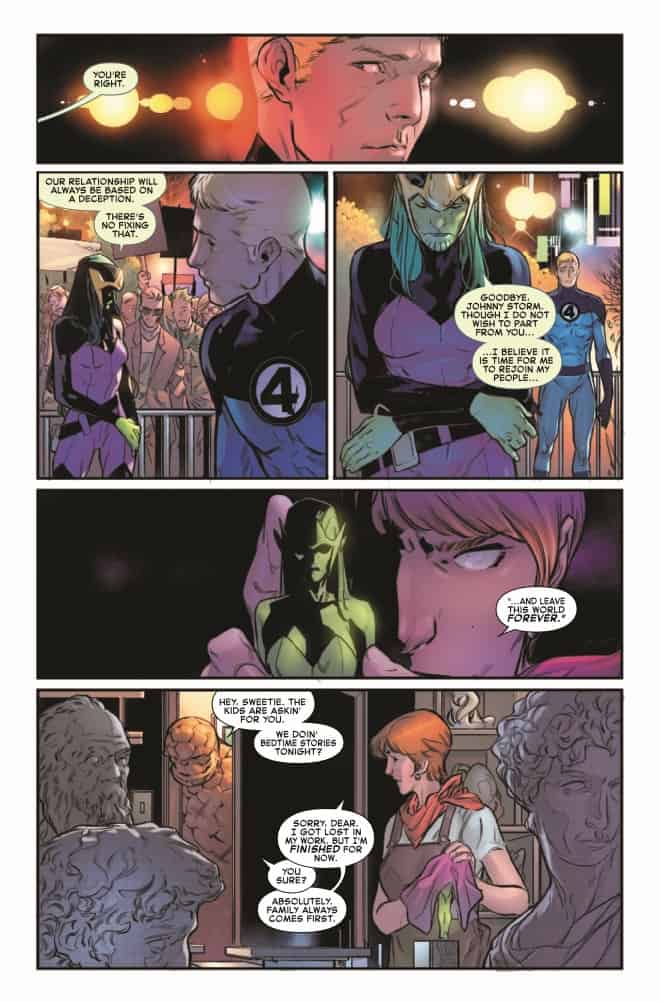 Meanwhile, Johnny, stung by the failed relationships of his past, has used casual sex to forget his troubles—and Sky, in bed by herself and feeling her supposed “soulmate” through the armbands, has sensed the Torch having sex with…Victorious!  The alien lass cries over Johnny’s infidelity, while Victorious kicks Johnny out of bed when she receives a holographic transmission from Dr. Doom!  Johnny crawls under the bed and hears the whole exchange between the woman he’s just shagged and the Monarch of Evil.  Doom reveals that Earth will soon face grave danger from multiple threats, and he wants someone to guard Latveria in his absence.  Not just anyone, but…his Queen!  At the command of Dr. Doom, Victorious is to return home and marry Earth’s greatest villain!  All this, while Johnny listens… 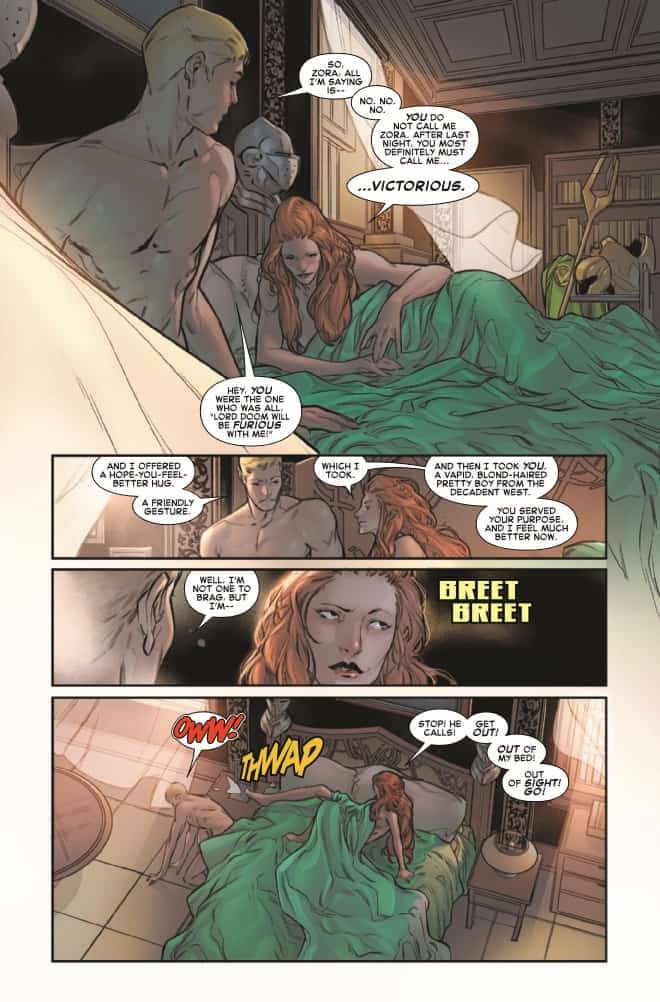 Flashback to the college days of Reed Richards, Ben Grimm, and Victor Von Doom, and a chess game that Reed and Victor never finished.  In the present, Doom calls Reed back to State University to finish their game…as a sword fight.  This, reveals Doom, is a Latverian King’s Challenge in which the losing combatant (it’s not to the death) will be honor bound to grant his opponent a boon that he can’t refuse.  Reed, seeing this as an opportunity to keep Doom out of America and away from the Fantastic Four forever, accepts the challenge, and he and Doom cross blades.  Doom emerges the winner and declares that Reed will now be his second, not in another duel, but in Doom’s wedding!  Why in the name of Lee and Kirby would the engaged Dr. Doom want his greatest enemy as his best man?  For that, we’ll have to keep reading as the 60th Anniversary of The Fantastic Four and Marvel Comics continues!

What have I been telling you about the Human Torch and Victorious since that whole wild yarn about Doom trying to harness Galactus?  Didn’t we all see this coming a light-year away? Granted, we didn’t think it would happen exactly the way it did, but Johnny going to bed with Doom’s enforcer was inevitable.  The Torch couldn’t help wanting to sleep with her—it’s the way he is—and Victorious’s loathing and contempt for the “vapid, blond-haired pretty boy from the decadent West” was obviously another feeling in disguise.  I never really liked that whole yarn about “Alicia,” who married Johnny, turning out to be really Lyja, but right now I have to admit something really good and juicy has come of it.  Johnny under the bed, hearing Doom propose to the woman with whom Johnny has just cheated on his girlfriend, who empathically saw and felt the whole thing:  that is just rich!  This is going to get our Torch into all kinds of trouble and make The Fantastic Four one of 2021’s best comic-book reads.

And how about Sky?  There’s a whole other kind of trouble.  It has seemed naïve from the beginning that Sky would just accept that her planet’s peculiar version of Match-dot-com paired her with a boy from another planet and that she would leave her planet with the Fantastic Four in search of their Happily Ever After.  Listen, Disney may own Marvel Comics now, but Marvel Comics does not work the same way as a Walt Disney movie.  There’s going to be plenty of heartbreak to go around as this storyline continues to unfold.

I’m still waiting for Dan Slott to make good on his promise to make Dr. Doom more dangerous than ever.  Whatever Doom is up to, it had better be one of the most diabolical things of his whole infamous career.  The payoff this time had better be huge.

I love the “60 Years” Fantastic Four silhouette graphic that’s now appearing on Marvel covers.  We need a full-size version, or a poster, of that, please.

Can Victorious marry Dr. Doom in spite of her attraction to the Human Torch?  Can Johnny ever atone for breaking Sky’s heart?  And what evil, heinous thing is Dr. Doom really up to this time?  The 60th Anniversary of The FF promises to be fun in the months ahead!

Fantastic Four Four #32: One Human Torch, Too Many Women