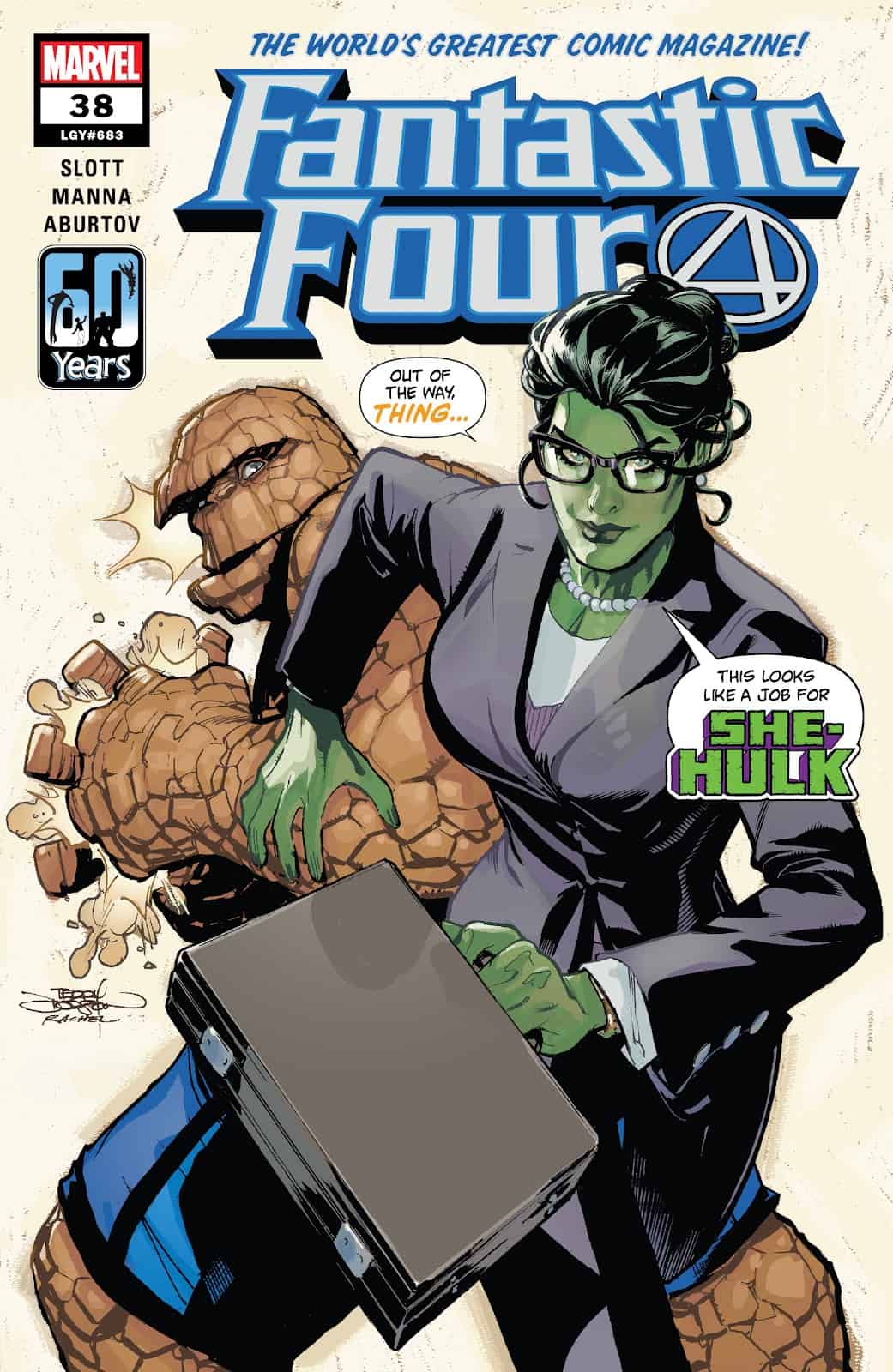 The pizza delivery guy arriving at the Baxter Building is not what he seems to be.  For one thing, no one ordered a pizza.  For another, he’s really The Wizard, and he has come not to battle the FF but to serve them.  And he’s not serving pizza; he’s serving a summons!  The sometime leader of the Frightful Four is suing Dragon Man and the Fantastic Four for custody of the Wizard’s clone, “Bentley 23” Wittman! 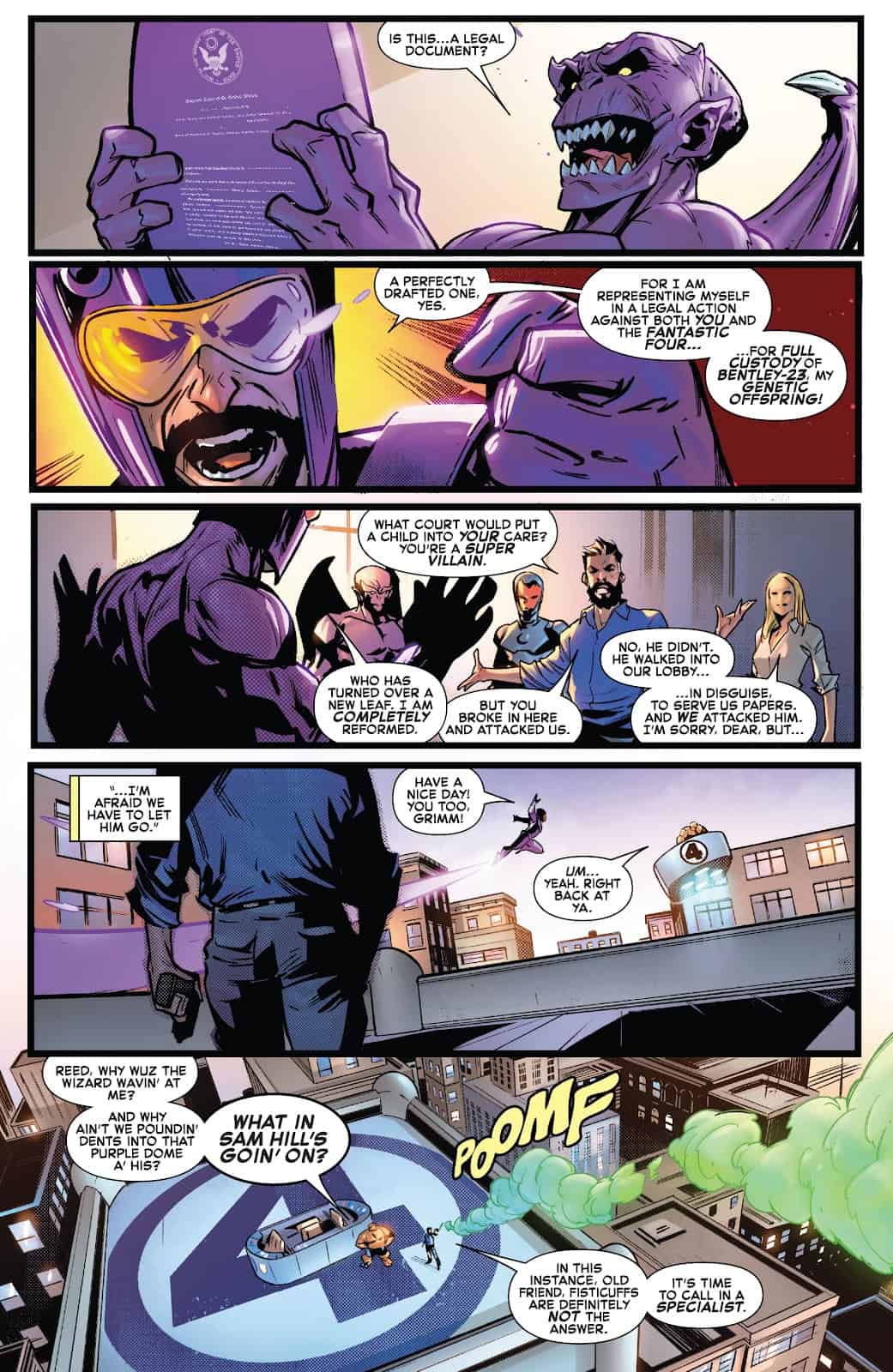 Instead of powering up, our heroes have to lawyer up this time.  Fortunately, She-Hulk has lately been restored from being a female facsimile of her cousin, the Hulk, and is once again her old super-strong, shapely, sexy legal-eagle self.  (Much to my relief.)  Green-skinned gladiator Jennifer Walters is more than ready to help her friends, the Fantastic Four, do battle before the bench.  So off they go for one of the strangest cases ever heard in a family court.  What follows is a lot of legal maneuvering, such as you would see only in a comic book.  (Or on Star Trek; some of it reminds us of the episode “The Measure of a Man,” dealing with Data (Brent Spiner) and the civil rights of androids.) 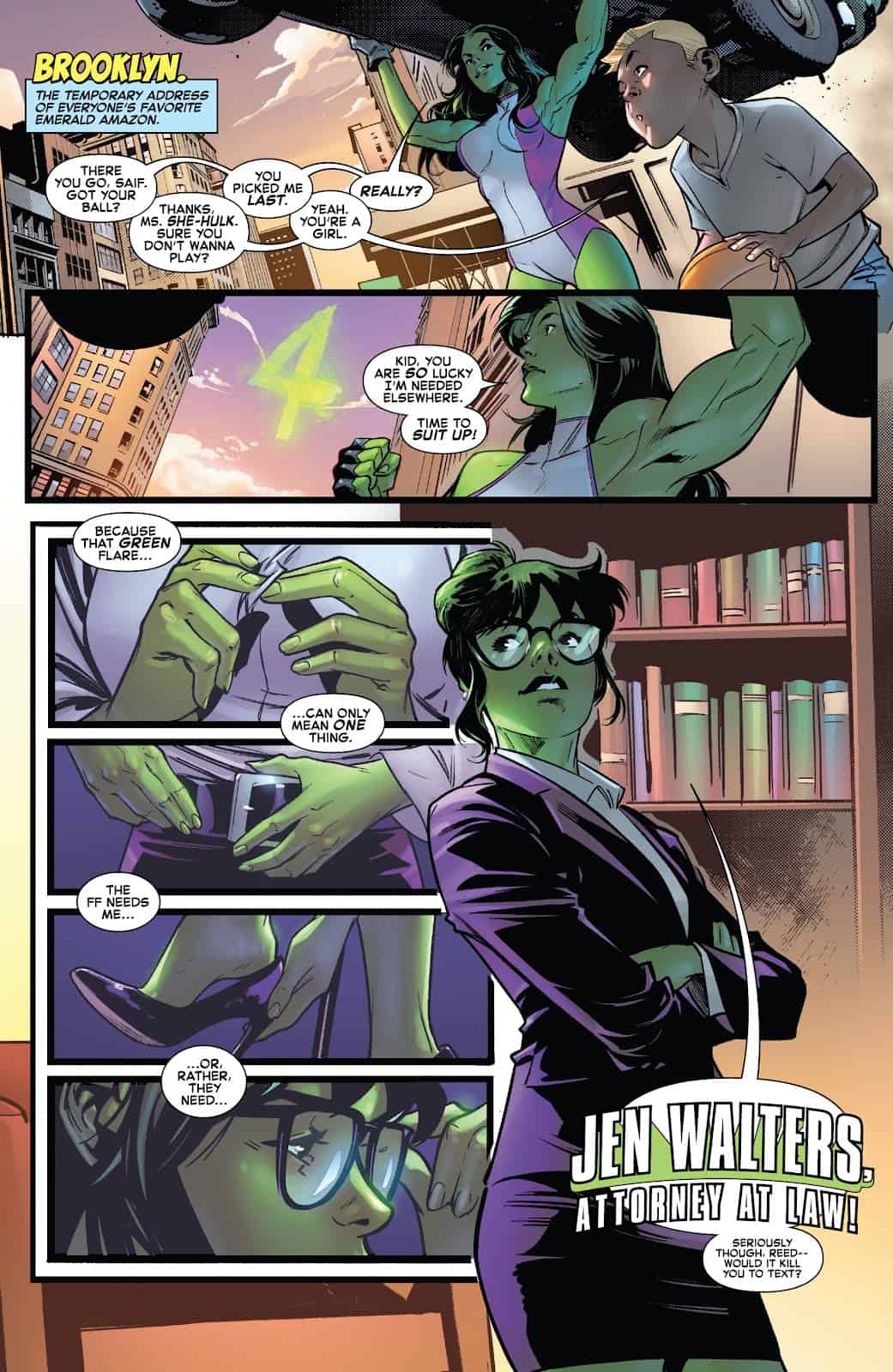 Hearing the case is one Judge Payne, who happens to be a superhuman herself and doesn’t tolerate aggressive or disruptive behavior from other supers in her courtroom.  The Wizard, representing himself, argues that She-Hulk’s motion to dismiss the case on the grounds that he is a super-villain is “baseless”—because he is not the same Wizard who has been battling the Human Torch and the FF for years.  That Wizard, he asserts, is a clone, which is verified in an identity scan by the suspicious Reed Richards, whose unsightly beard in this issue takes on the look of a scraggly black bush of weeds growing on his face.  Please shave that thing!  The Wizard then charges that his young clone should not be left in the custody of Dragon Man, who is an artificial life form and is no more sentient than the Siri on your iPhone!  To back up this claim, he produces Diablo as a witness—Diablo, who, as you’ll remember from the classic FF #35, is the one who turned a college professor’s experiment into the living Dragon Man in the first place.  When the Fantastic Four go on the attack at the appearance of their old foe, Judge Payne demonstrates her zero-tolerance for superhuman behavior by freezing their powers and Diablo’s!

Diablo testifies that he can return Dragon Man to being the inert statue that he originally was with a snap of his fingers, a threat that Dragon Man takes so seriously that he begs She-Hulk to defer cross-examination just to get rid of the evil alchemist.  The Wizard then cites that under Dragon Man’s care, Bentley has been menaced by The Griever and the Venom symbiotes and that just a few issues ago, he snuck through the Forever Gate and beat up Prince Arboro for breaking Valeria Richards’s heart.  Reed and Sue Richards try to make an end run around the Wizard’s arguments by offering to become Bentley’s guardians themselves, which leads to She-Hulk requesting a recess and the Wizard looking very smug.

The next day in court, the Wizard challenges Reed and Sue’s offer by pointing out all the times that Franklin and Valeria, as the children of the Fantastic Four, have been in danger and that the Richardses allowed the young members of the Future Foundation to remain in outer space by themselves while returning to Earth to restart the FF.  He then reveals, in a distorted account of the facts, that Franklin has been so “traumatized” that he is now in therapy.  Finally, when the Thing steps up and offers to take Bentley in, the Wizard submits that with Ben and Alicia as his surrogate parents, the Kree boy Jo-Venn went wild and murdered four extraterrestrials; in public just last issue!  (Leaving out the fact that Jo was protecting his sister, N’Kalla the Skrull, from being abducted by the Profiteer.)  Naturally, the Thing jumps up and prepares to put a righteous clobbering on the Wizard, and right at the moment of greatest disorder in the court, the Judge freezes everyone’s powers and threatens to revoke everyone’s custody; of all their children at once!  To be continued… 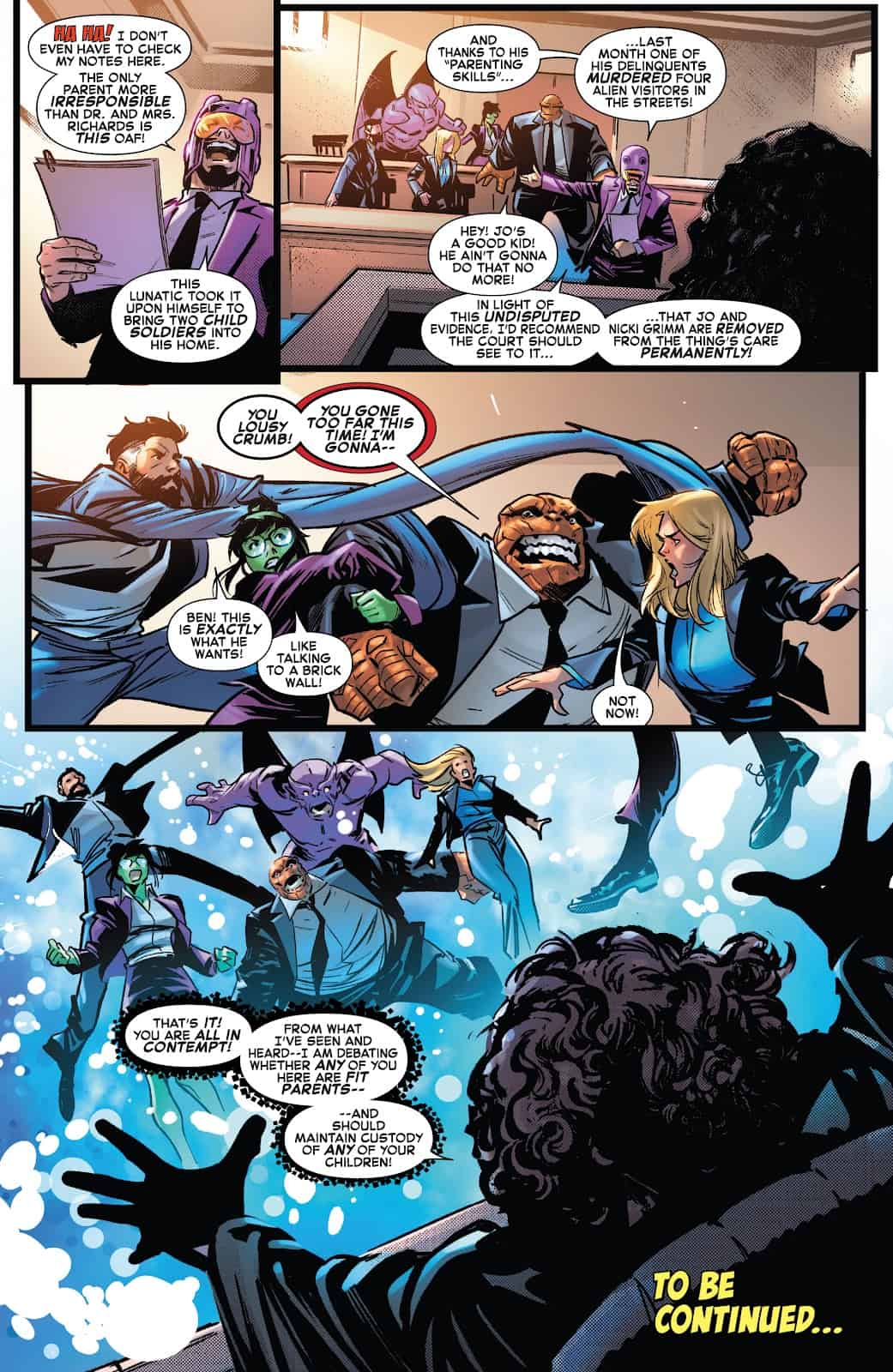 While this is not the usual kind of predicament that our Fantastic Four has to face, it is not without precedent (to put it in legal terms).  Those of us who have been with Marvel’s First Family for a while will, I’m sure, remember that the FF stories of J. Michael Straczynski and Mike McKone started with a plot about New York Child Protective Services deciding that the Baxter Building was not a safe environment for children and wanting to take Franklin and Valeria away from Reed and Sue.  Some bureaucrat got it into his head that since super-villains, enemy aliens, and monsters were always attacking Madison and 42nd, the Richards kids would be better off placed in foster care with Mr. and Mrs. Mundane of Nowhere, NY.  Reed soon showed the State’s Social Services that taking Franklin and Valeria away from their parents would be the worst thing for everyone, especially the common citizens who would be sitting ducks the minute any vengeful villains came after the kids.  That saga was laid upon us in Fantastic Four #527-532.

This story is a skillful use of Fantastic Four history, both recent and going back into the original stories of Stan and Jack.  It also makes one’s blood boil a bit to watch the Wizard play fast and loose with some of the facts about the Richardses’ and Grimms’ relationships with their kids, submitting only the most alarming details about that history and leaving out all the extenuating circumstances.  But then things like this probably go on in real courtrooms all the time, and the parties responsible get away with it just the way the Wizard does—up to a point.  All in all, this issue and the next will provide us with an entertaining change of pace from all the epic super-drama of the preceding months with Dr. Doom, the Kangs, and so forth, presenting a story with very different stakes.  Plot-wise, it makes a little intermezzo between those tales and the much bigger stories that will start to unfold at the beginning of 2022.

But once again we have the problem that has continued to dog Marvel’s first and finest title:  NO REGULAR ARTIST!  This perpetual switching up of pencilers has gotten absolutely tiresome, with no consistency of visual style from one issue to the next.  Why must The Fantastic Four be subjected to this?  Is there no single artist of the proper style and caliber to step up for the task of drawing the adventures of the world’s greatest heroes on a month-to-month basis?  Is there no one who’s worthy of the job, who wants the prestigious position of being the regular artist of The FF?  Come on, Marvel, there must be someone!  The FF needs a penciler who’s equal to the job of being their full-time artist on board, and it needs that artist now!

We know, of course, that the Wizard is neither the “law-abiding citizen” that he claims to be, nor is his interest in Bentley one of mere paternal concern.  Bentley has already begun to catch on that his “father” has somehow been spying on him, and we can be pretty sure that what the Wizard really wants is not a son but a protege in evil.  Of course, this being a courtroom story, knowing this and proving it are two different things, and it looks like the FF are going to have their hands full just keeping their own family intact!  This will all have to be sorted out somehow next issue.