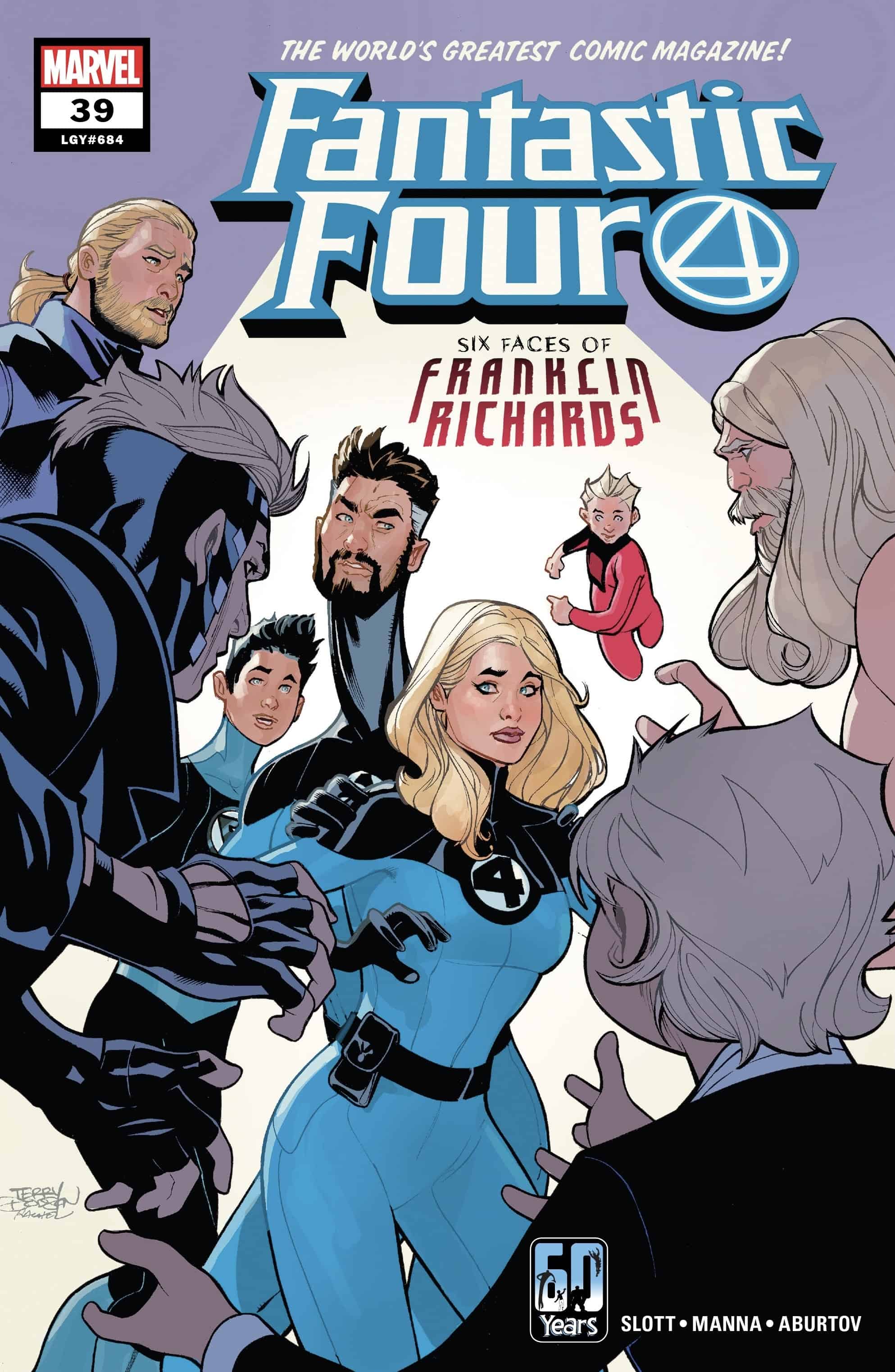 Court is in recess in the hearing for custody of Bentley 23, the clone of the evil Wizard.  The Torch is afire with impatience for Reed to find a way to reverse what Dr. Doom did to Johnny’s powers.  Reed’s face is disappearing into that damn shabby-looking beard.  Sue actually slaps her brother for losing his temper at Reed, and Johnny flies off, hurt, angry, and scared.  Yep, it’s turmoil as usual for the Fantastic Four.

However, when the hearing resumes, it is with lawyer She-Hulk’s assurance that any legal attempt to take Franklin and Valeria away from Reed and Sue (the cliffhanger on which the end of the last issue dangled) will not have a leg to stand on.  The FF’s only real challenge is to prove that Bentley is better off with them and Dragon Man than with his “father.”  This would be a much easier task if She-Hulk and the FF knew that the Wizard has tricked out Bentley’s eyes with nano-fibre optics, the better for him to spy on the FF and learn Reed’s super-science secrets, which is what the villain has really been after all along.

Testimony resumes with Judge Payne hearing stories about the Thing teaching Jo-Venn not to hide his identity from human kids with an image inducer, Valeria recalling a time when Reed rescued her from an antigravity experiment that got out of control, and Franklin telling of a session with mutant therapist Terry Ward, aka Trauma, in which Reed and Sue joined them and reassured Franklin through his insecurities and fears.  Meanwhile, the Torch tries to extinguish himself in the ocean and provokes the wrath of the Sub-Mariner, then tries to snuff out his flame by flying out of the atmosphere and learns that his powers continue to work full-blast even in the hard vacuum of space.  Is Johnny’s situation truly hopeless? 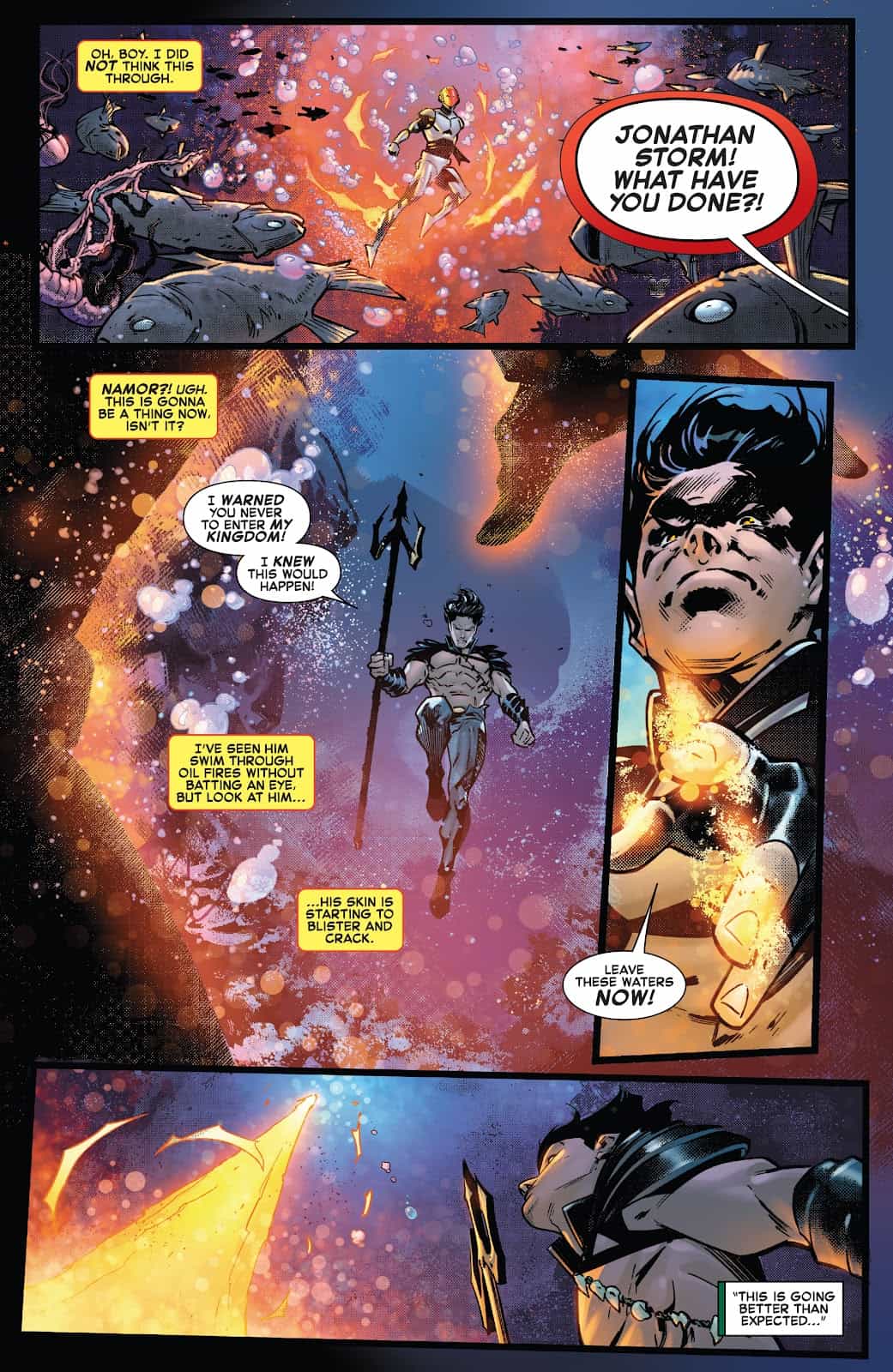 At last, a surprise witness enters the court:  a man announcing that he is the original, true Bentley Wittman, and that the man suing the Fantastic Four is in fact his clone!  When the identity scanner backs up the new witness’s claim, the plaintiff in the lawsuit flies into a rage and flies out of the courtroom, right through the wall!  Judge Payne, a superhuman who hates hearing superhuman cases, is fed up; she dismisses the suit and throws everyone out!

However, there is one twist in the case.  Young Bentley has figured out what his “father” did to his optic nerves and reverse-engineered it to hijack all of the Wizard’s tech.  It was Bentley 23 himself who created the surprise witness using the Wizard’s own cloning technology, making him such a superior clone that the identity scanner was fooled, and thus enabling the clone to secure Bentley’s legal emancipation!  Now it is young Bentley who takes on the mantle of the Wizard, but will it be for good or ill?  Only time will tell.

This issue handily ties off a story that put the FF in an unusual predicament, ironically letting Bentley 23, whose life and future were being so hotly contested, do some maneuvering around the law to solve the problem himself.  We won’t quibble about the ethics of the whole thing, since there was nothing at all ethical about what the Wizard was doing to begin with.  The good news, other than the emancipation of Bentley, is that the outcome of this story takes Dragon Man and Bentley out of the Baxter Building and pares down the supporting cast of the book.  Having fewer characters in play will make things simpler and more readable as The Fantastic Four moves into much bigger and much more dire stories, starting in the next issue.

The ordeal of the Human Torch leaves off with Reed further diagnosing exactly what Dr. Doom did to his brother-in-law.  The powers of the Human Torch remain permanently cranked up both at the bottom of the sea and in outer space where they should be snuffed out because they are now “fueled by ambient cosmic energy,” from which Johnny can’t simply “flame off.”  I’m reminded of old letters that fans used to write to the Fantastic Four Fan Page, speculating on the physical and chemical nature of the Torch’s powers (that’s the kind of readers that this book naturally attracts—it’s only natural for a comic book about science to draw an audience of science buffs), and I’m wondering what conceptual tricks Dan Slott may have up his sleeve to get Johnny out of this.  That is, of course, assuming that getting Johnny out of it is what Slott has in mind…

All in all, there’s not that much more to say about this issue except that it neatly resolves the problem that last issue started, and it’s good to be able to move on from this tale—although from what I’ve been reading about the next few issues, it sounds as if the FF will soon wish that a lawsuit were all that they had to worry about.

As for the art—and this goes for the cover as well as the interior art—I have simply given up on artists remembering the visual standard of Mr. Fantastic stretching at the torso, not at the neck.  People (including Marvel Comics editors who should catch things like this) don’t seem to care that it is out of character for Reed to do that; he is not Plastic Man or Elongated Man.  That detail of character seems utterly lost on artists today, and it reminds me of something that Moondragon said to the Sub-Mariner in The Avengers Vol. 3 #1:  “Standards fall, Namor.  It’s the way of the universe.”

We take our leave, for now, of Dragon Man and Bentley 23, though it appears that the next time Bentley shows up, he will have taken on a new guise.  The Wizard we’ve known up to now was an evil genius and a would-be murderer.  There’s no basis for that kind of evil in young Bentley, so what role he will play in the future of the Fantastic Four remains to be seen.  However, it will be good to have our stories focusing on only the immediate Richards family during these next months with “The Reckoning War.”