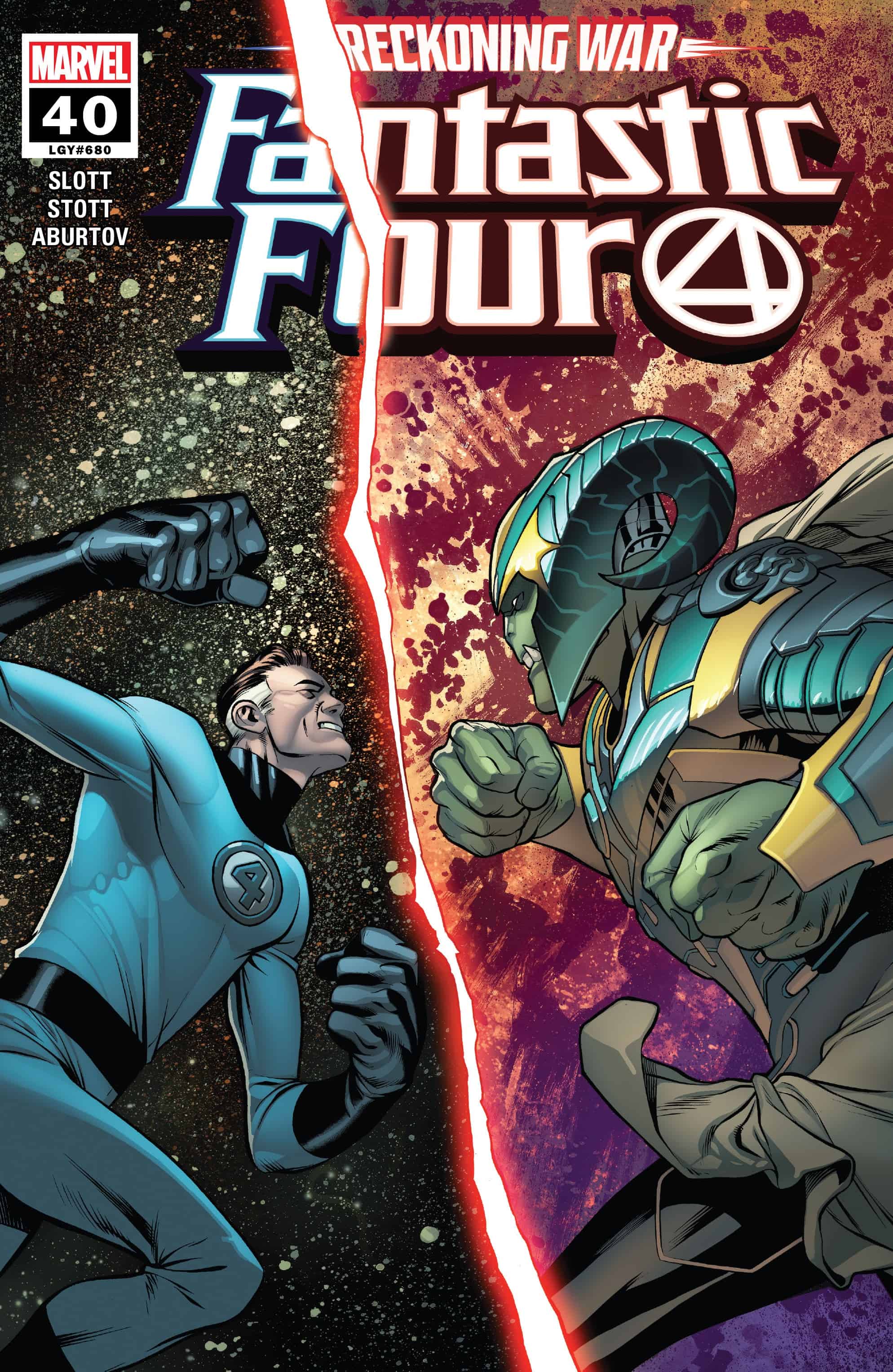 We all recognize the leader of the Fantastic Four as a “know-it-all,” but this is ridiculous.

As you’ll remember, with the entire universe engulfed in the fateful Reckoning War and Earth’s Moon destroyed in an attempted assassination of the Watcher, Reed Richards has assimilated the Watchers’ equivalent of Google to lead the effort to save the cosmos.  Taking charge of the situation leads to some startling maneuvers—and at least one very welcome one.  To instill other heroes’ “faith” in the Fantastic Four, and reinforce the rest of the team’s faith in him, Reed finally shaves off that bloody beard which he should have gotten rid of before the Thing’s wedding.  More about this in a moment.  He also wills the FF’s uniform back to its most familiar vintage Jack Kirby look, the design with narrow black collars on the top that Jack began in FF #6 and continued for the rest of the book’s first decade, which persisted all the way to FF #185.  That latter thing doesn’t really strike me as necessary; the outfit that they had was an acceptable update.  But aside from the aesthetic changes, Reed is setting some other things in motion. 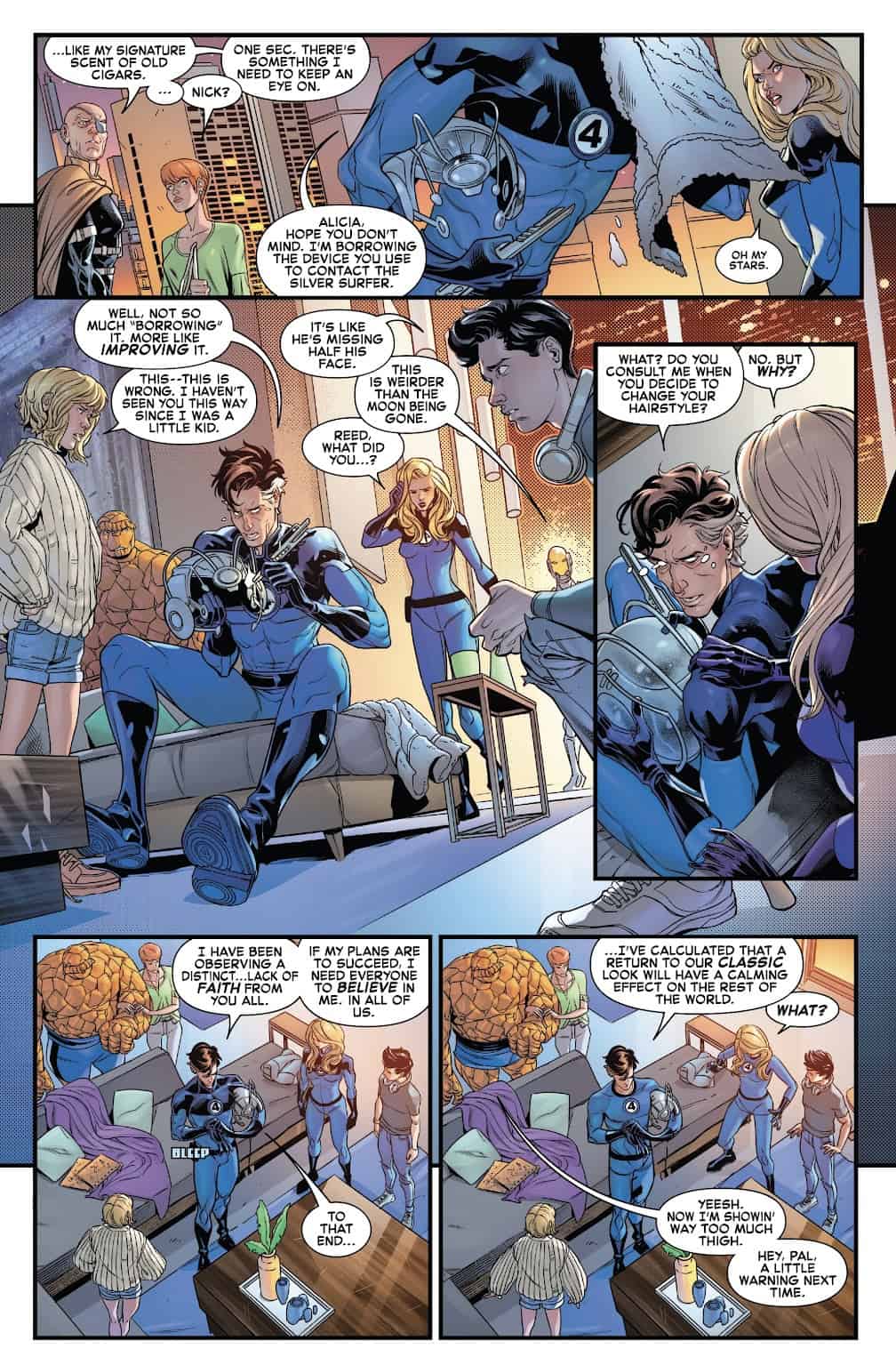 Reed has Captain America give his shield to Justice (Vance Astrovik) to scare the invading Brotherhood of Badoon with their phobia about his future self—Major Vance Astro of the original Guardians of the Galaxy—leading their destruction while carrying that selfsame shield.  He psychologizes the traumatized Moon Knight—soon to be a major TV super-hero played by Oscar Isaac—by having him become the avenger of the Moon.  And he summons She-Hulk—who is supposed to be a major cause of this crisis—and the Jack of Hearts to the Baxter Building.  The next thing he does is more disturbing.  He reveals that with his new omniscience, he can see how to reverse Dr. Doom’s massive amplification of the Human Torch’s powers—but he refuses to do it because Johnny is now Reed’s biggest weapon.  This is a shocking decision on the part of the hero who embodies science combined with compassion, and it has consequences.

Meanwhile, Dr. Doom invades Camp Hammond in Stamford, Connecticut (Ground Zero of the super-hero Civil War), dispatches the guards, and finds what the super-powerful Cormorant was looking for in that earlier battle in which he destroyed the previous Baxter Building.  Whatever it is, hidden in a temporal field, Doom calls it “the deadliest weapon presently on Earth.”  Whenever a thing like that is in the hands of Earth’s greatest villain, it’s time to worry. 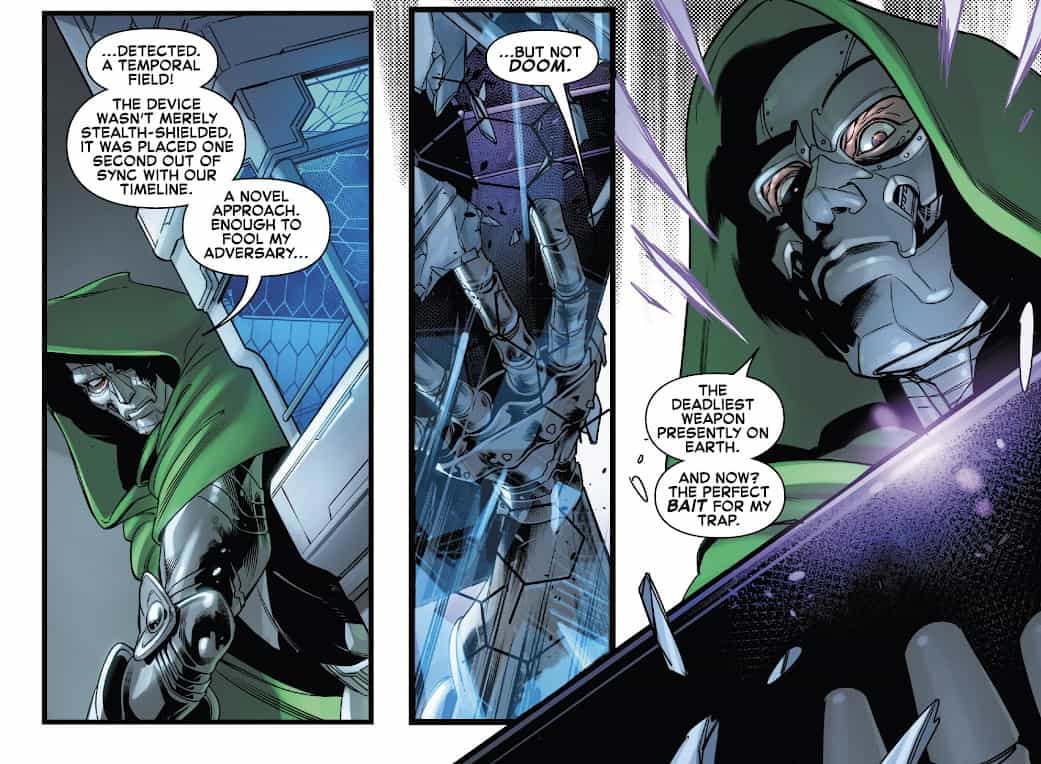 As all that is going on, the Silver Surfer informs Reed that he is going to Asgard, where his fellow Galactian Heralds are battling to unearth the remains of Galactus, but doesn’t say whether he’ll be helping the resident gods or the Heralds.  And Reed ascertains that the battle that his people most need to join is on the Shi’Ar planet where the M’Kraan Crystal is kept.  (You remember the M’Kraan Crystal from The X-Men #108.  It was originally supposed to contain a neutron galaxy that could collapse the universe, secured in a mesh of stasis fields.  It is now said to be the Nexus of Realities—the main Nexus, not a secondary one like the one in the Everglades where the Man-Thing lives.)  When the Torch points out that Annihilus is attacking planet Spyre, where Sky lives—you recall what happened with Sky and the “soulmate” bands when Doom took his revenge on Johnny—he tells Reed that they have to help Sky’s people, and Reed refuses.  Naturally the Torch, already angry at Reed’s refusal to cure him, goes blazing off to Spyre on his own.  Just as naturally, the sangfroid of her husband’s actions shocks Sue.  But Reed has plans for her as well.  Incorporating Watcher tech that can make her undetectable by Watcher senses into the Invisible Woman’s uniform, Reed turns his wife into the ultimate stealth operative.

Alicia and the kids sense something very wrong about everything that is happening.  The Watcher arrives on his home planet to rally his brother and sister Watchers against the Reckoning.  And Reed, the Thing, She-Hulk, and the Jack of Hearts arrive on that planet of the M’Kraan Crystal, where the Shi’Ar Imperials and crystal guardians Modt and Jahf have all just been flattened by two characters called the Reject (no relation to the Deviant kid from Kirby’s Eternals) and Rapture.  The Thing recognizes Rapture from the precognitive attack of the Griever (FF #28) as the being who is fated to destroy him.  That is horrifying enough, but Reed’s next reveal is still another shocker.  The Watcher omniscience that he has taken on is melting down the mind of Mr. Fantastic and will be his doom in a matter of days!  It looks very much as if Reed and Ben are both goners.  To be continued…

Dan Slott and the folks at Marvel Comics had no way of knowing that February 16, when this issue was released, is my birthday, but they have certainly given me one of the most welcome presents that I could have gotten by finally getting that ugly, tacky, shabby, sleazy, unkempt, unbecoming, undignified, raffish-looking, and altogether utterly unsightly eyesore of a beard off the face of the leader of the Fantastic Four.  Since the current FF series started, I have not let an issue of reviews go by without raising some objection to having Mr. Fantastic running around looking like some costumed ruffian, and it is only with a crisis of this magnitude that we have Reed restored to looking like himself again.  To which I can say only…

FINALLY!  IT’S ABOUT BLOODY TIME!  NOW CAN WE PLEASE KEEP IT THAT WAY?

Okay, enough of that.  We have other matters to discuss—namely, Reed’s overall conduct in this latest cosmic upheaval.

We know that Reed, even without his Watcher upgrades, is the superior human intelligence of the Marvel Universe (regardless of what they tell you about his daughter and other characters).  We know that Reed’s command of science and knowledge and the ways in which he uses them can make him seem overly clinical, too detached, too focused and driven.  We know that Reed can appear to be an entirely pragmatic person and so focused on the “big picture” of things that he misses the more intimate details.  But his handling of Johnny’s problem in this issue is troubling.

Reed as we know him generally knows how to balance science with compassion, and when he has gone off the beam he has always had Sue and the others to remind him of this critical balance.  That is the central premise of The Fantastic Four.  Everyone says it’s about family, which is true, but on a deeper level it has always been about the greatest “power” being the marriage of the mind and the heart.  By thinking of Johnny only as his “greatest weapon” against the Reckoning and dismissing the pain and anguish that his brother-in-law has been experiencing over what’s been done to his powers and his life, Reed seems to be showing that he’s lost his balance.  Sue is right to be very worried about this.  We all should be.  This becomes even more glaring in the light of Reed bringing in the Jack of Hearts as an apparent backup for Johnny.  If he knew he was going to call on Jack in this capacity, Reed’s outright refusal to help his brother-in-law seems truly callous.  That really doesn’t bode well.

But all is not necessarily lost.  Reed’s compassion is still there when he calls upon Sue to become his “greatest secret asset.”  He acknowledges that he has been scaring Sue and she recognizes what is happening to him.  Their feeling for each other suggests that Reed has not been completely consumed by his massive intelligence upgrade and he is still capable of that balance of the mind and the heart that has always carried the Fantastic Four through any crisis.  However, remember that in FF #42, just two issues from now, Reed supposedly will have done something that so infuriates the Thing that Ben wants to murder him.  What could possibly happen in just one more issue, perhaps two, to drive Ben to such an extreme?  Something ominous is hanging over the heads of our Fantastic Four right now. 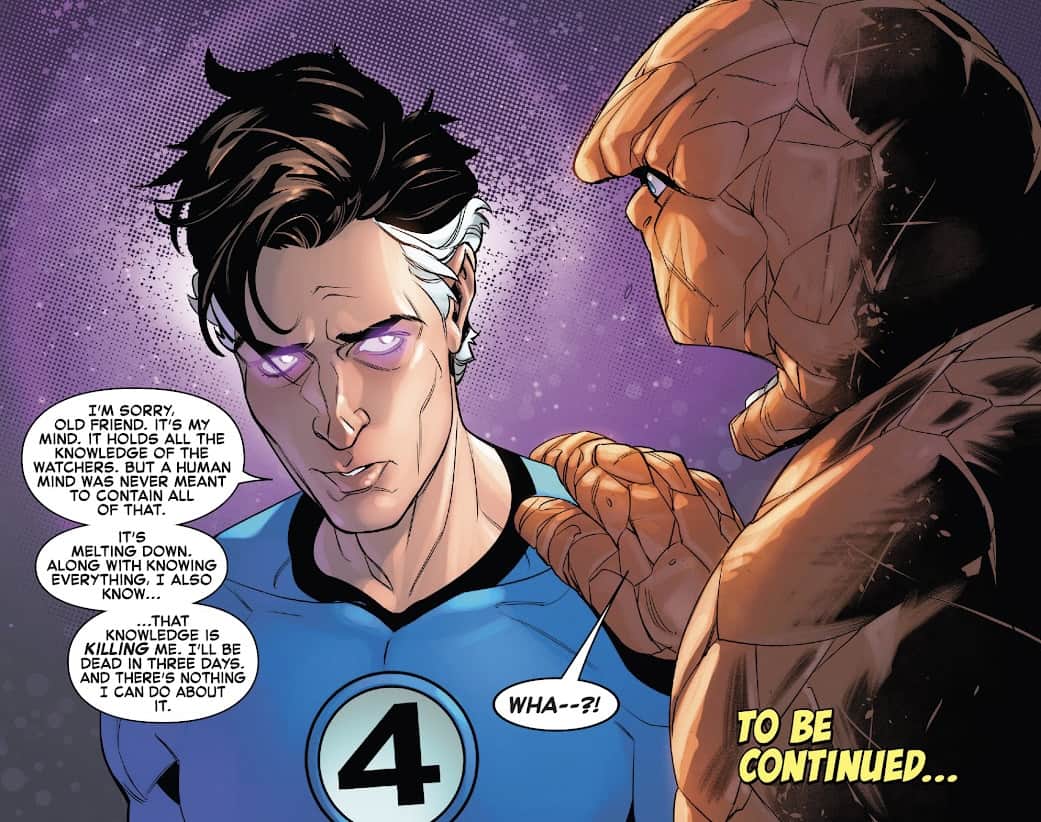 I only wish those heads, including that of the gratifyingly shaved Reed, were looking better.  The latest of this book’s endless fluctuation of artists is Rachael Stott, who makes Reed look too gawky and nerdy-looking, and I can’t tell whether this is an effect of the Watcher intelligence or just something about the artist’s style.  She also draws what may be the most unsatisfying rendition of the Thing since that of Sara Pichelli at the beginning of the current series.  In addition she is making She-Hulk look too bulky and massively built at a time when the character has just been restored from the Hulk-like extremes that were inflicted on her.  She’s lost the sleekness of her musculature again.  Leaving aside the way Stott is drawing She-Hulk, there is really no need for what’s happening visually with Reed unless he is physically turning into a Watcher.  The cover of this issue is by Carlos Pacheco and shows Reed looking much more heroic, the way we want to see him.  I don’t know why we can’t have Pacheco, who has been the main artist of The FF before, back on the interior pencils.  I don’t know why we can’t have someone like Ron Lim, who’s doing such beautiful work on the current Silver Surfer miniseries, or Aaron Lopresti, drawing this mag.  Why don’t they bring back Sean Izaaske, who’s done such a good job with The FF in prior issues?  Why has The Fantastic Four, the original Marvel comic book, become the proving ground for new artists whose styles range so widely in appropriateness for this series?  It remains the most frustrating aspect of the book right now.  It’s unfortunate that The FF is working best for story value currently, when it should be top-shelf for story and art.

“The Reckoning War” qualifies as a Marvel “Event,” but it is one that is concentrated primarily on this one book instead of spilling out into every other book in the line, which is a welcome thing, considering that the price of a regular Marvel comic book is now basically four bucks!  The really big concerns at the moment are the fate of the Torch and whatever is going to make the Thing turn on Reed in a couple of issues.  The FF is going to some extreme and dire places, and it leaves us to wonder what the lasting effects of all this will be on the future of Marvel’s First Family.