Fantastic Four #41: Who Watches the Watchers When They’re Not Watching? 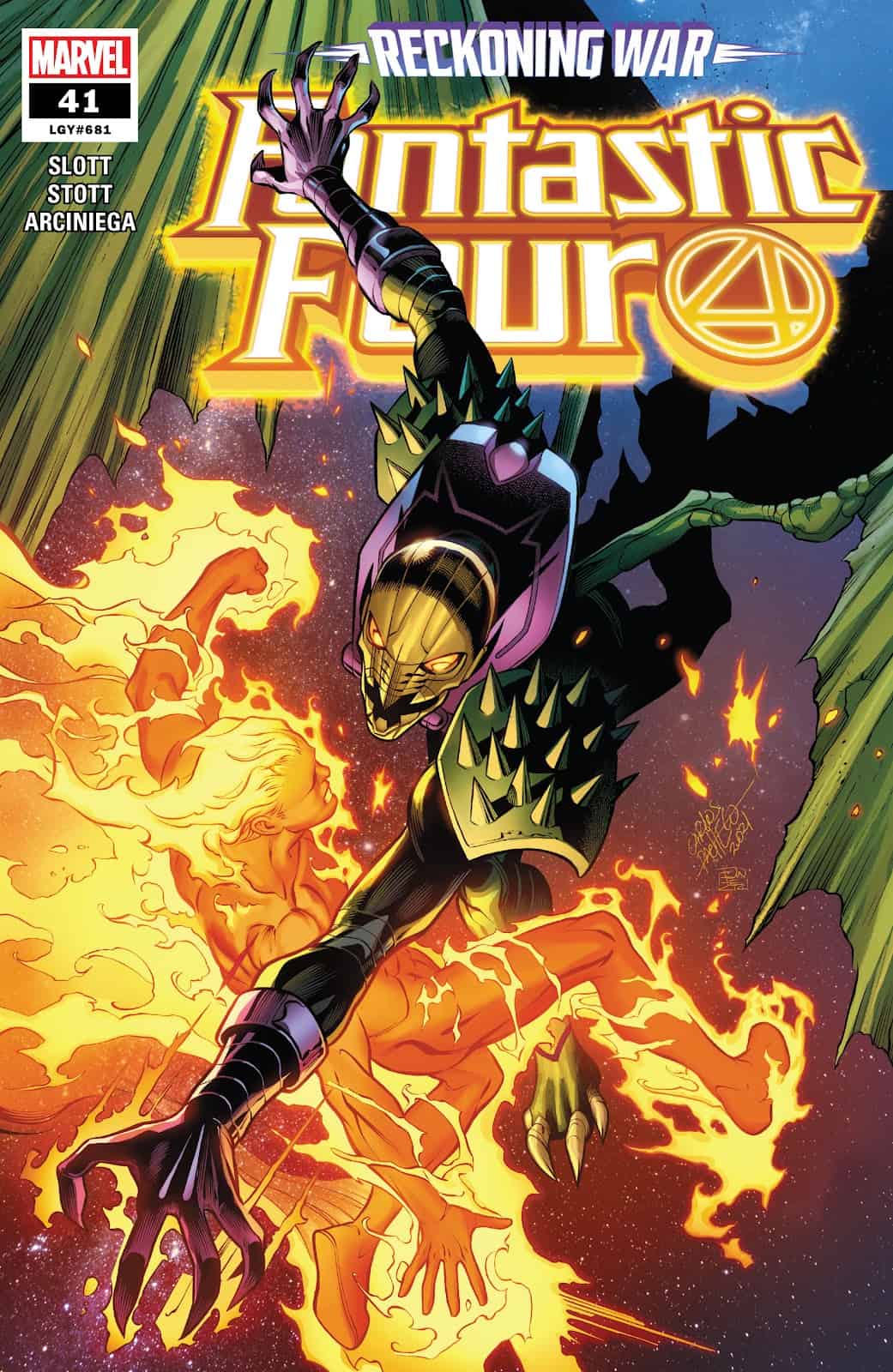 The Watchers are not only among the most powerful beings in the universe, but also the most learned.  So you’d think they’d understand ideas like “exceptions to the rule” and “mitigating circumstances.”  No such luck in this issue.

When “our” Watcher, the one formerly stationed on what used to be our Moon, tries to rally his people against The Reckoning, he warns them that these beings who are tearing the universe asunder are really the Prosilicans, whom the early Watchers once gave technology for which they were not prepared.  The Watcher all but begs his people to rise up against their former protégés, for which his powers are seized and he is imprisoned—by his own father!  These cosmic historians are sticking to their creed of non-interference in the universe, even if it means the end of the universe.  And you thought only Siths deal in absolutes!

Elsewhere, on the planet of the M’Kraan Crystal, the Thing barely has a moment to take in Reed’s reveal that the Watchers’ omnipotence is killing him.  Reed, Ben, She-Hulk, and the Jack of Hearts must battle the deadly Rapture and Reject.  The Thing faces Rapture in spite of knowing that this fatal female is destined to destroy him.  She almost slices off his fingers and is stopped only by Ben’s Adamantium wedding ring, which she cuts to pieces!  An instant later, she cuts open poor Ben’s stomach, and Reed desperately wraps himself around his friend to hold him together.  When Rapture and the Reject head for the M’Kraan Crystal, following the Wrath’s orders to open up a can of cosmic destruction, She-Hulk suddenly has a flash on insight about why this whole thing is her fault—but that will have to remain a tantalizing cliffhanger, because we have another battle to witness, this one on the planet Spyre. 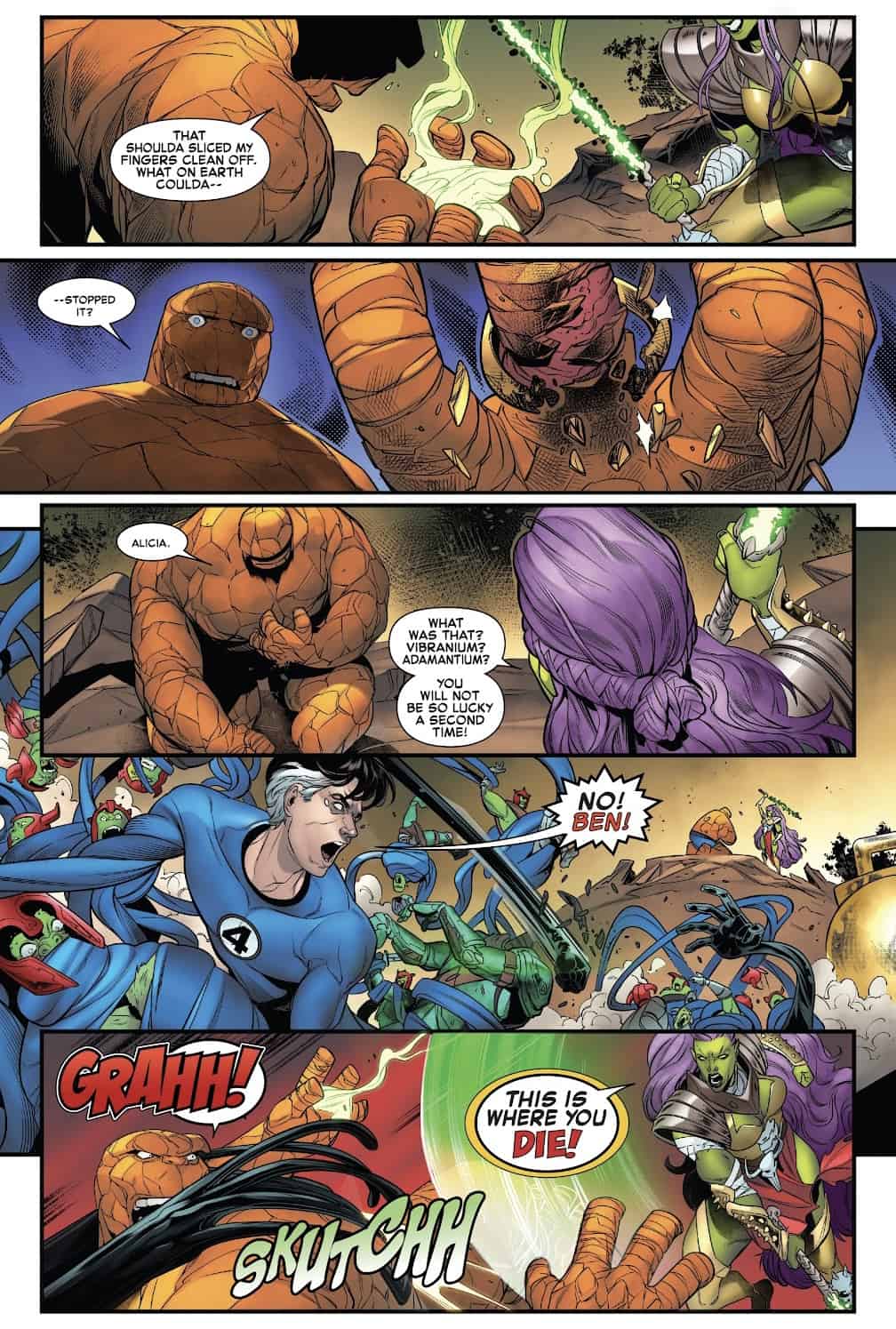 The Unparallelled are up to their soulmate bands in the forces of the all-annihilating Annihilus when Spyre suddenly appears to have a third sun.  But wait, that’s no sun; that’s the Human Torch, whose powers have been amped-up to make him a virtual living star.  You’ll remember everything that Johnny went through when Annihilus’s Negative Zone critters swarmed him and he appeared to have “died.”  That’s why our torrid Torch is taking no cosmic crap from these guys now.  Straight away, he roasts the “Annihilation Wave” and confiscates the Cosmic Control Rod from Annihilus himself, sending the iniquitous insect back to the Negative Zone and seizing his armada.  He gives the Cosmic Control Rod to the Overseer of Spyre and rallies the Unparallelled to take this battle to other places in the universe where they’re needed.  The Unparallelled, like true super-heroes, prepare to leave Spyre for what is probably the first time for most of them (except for Sky, and we’ll talk about this in a minute) to show the universe what they’ve got.

And finally, in Asgard, the assembled Heralds of Galactus, joined by the Silver Surfer, have ended their battle with the Norse Gods and are pumping cosmic energy into the remains of Galactus to resurrect him.  The Surfer himself feels compelled to join and help them—as does mighty Thor, who also did a brief tour of duty as a Herald.  As Galactus’s body regenerates, the Destroyer—another former Galactian Herald—appears, disassembling itself and wrapping around the planet-killer’s reconstituting body to form a new entity which the Surfer dubs “The Destruction.”  Removing the Ultimate Nullifier from a pocket dimension inside his surfboard, the Surfer leads The Destruction off into space to present yet another challenge to The Reckoning. 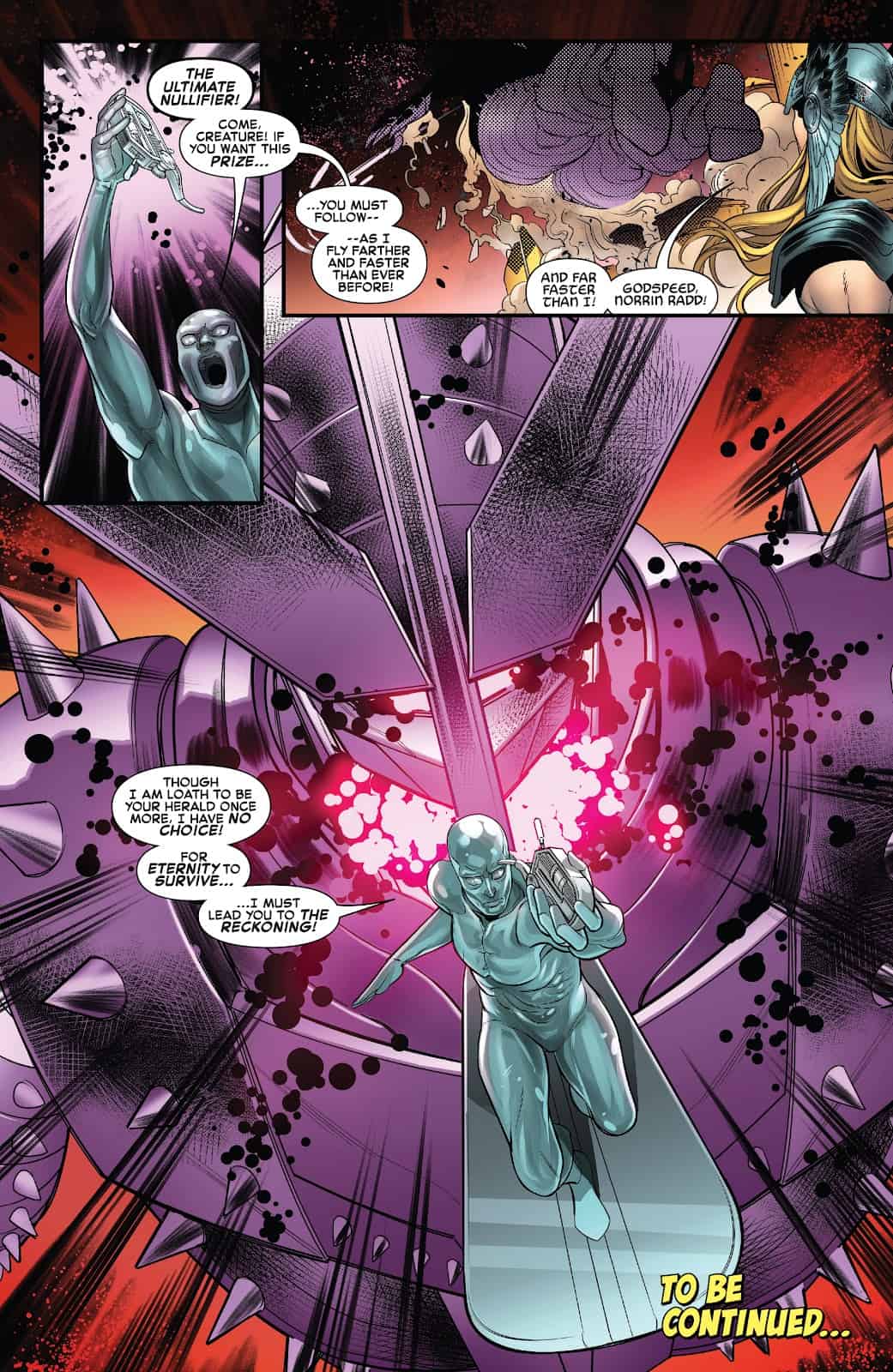 Where do you reckon all of this is going to end up?  To be continued…

Bashful Ben losing his wedding ring and then being nearly disemboweled—I don’t know what’s more painful there.  And yet, I’m still not seeing the set-up for the horror that’s supposed to befall next issue when Ben launches a murderous attack on his best friend.  In fact this issue leaves him in no condition to do any such thing.  I’m seriously wondering what all this really means.  We still don’t have any clue to why Ben would suddenly become homicidally angry at Reed.  This whole business is making me very suspicious.  There’s obviously some card in Dan Slott’s hand that he is not playing.

This issue’s melee on the planet Spyre raises the question of how Johnny even got there without a spaceship.  Are we to assume that his cosmically ramped-up powers have given him a space-warp capability?  There’s nothing to support that conclusion, and yet there he is, barbecuing “the Annihilation Wave” and mugging Annihilus in just a few pages.  The section of this issue devoted to that battle also leaves no time for the moral and character implications of Johnny’s return to Spyre.  Remember, Sky, who had never been off her home planet or out of its hermetically sealed society, left Spyre because its soulmate-matching intelligence mysteriously paired her with the Torch.  She was a virtual innocent until her time on Earth, when she was exposed to Johnny’s sexual waywardness through the armbands and mutated by Dr. Doom’s revenge on the Torch.  There is no opportunity for Sky, her prior soulmate Citadel (who actually does love her), the Overseer, or anyone else on Spyre to confront Johnny and say, “We trusted you with Sky’s heart and well-being, and look what you did to her!”  Such a scene would be a natural development, but there’s no room for it here.  I hope Dan Slott will address this in an upcoming issue.

And what about this business of Galactus leaving a corpse?  Exactly how does that happen?  They had him “dead” and his “remains” hidden under the surface of Earth during the Jonathan Hickman stories as well, and I have never understood how a being who is the embodiment of the balance of nature, whose body is actually composed of living fractals (see the Quasar stories of Mark Gruenwald) can have physical remains after he dies.  A creature made of living fractals should just disintegrate without a trace, shouldn’t he?  Have Marvel’s writers forgotten this detail or do they just not care and want to write whatever they like?  I’m betting it’s the latter.

Rachael Stott is still on board as artist, as she apparently will be until the double-sized finale of this saga in FF #44.  (I looked ahead in Marvel Previews at the comic shop yesterday.)  I’m still not satisfied with her overly gawky rendition of Reed, her somewhat sketchy Thing, or her overly bulky She-Hulk.  This issue also contains a preview of April’s return of John Romita Jr. to The Amazing Spider-Man.  John Jr. has done the Webhead and done him and done him and done him some more.  His style is more needed here.  I guess we’re just going to have to watch over the next few months and see how Stott improves.  I hope she does; The Fantastic Four deserves the best art that a comic book can get.

Well, next issue, the Thing is supposed to turn on Reed and try to murder him, and we’re still not seeing the motive for this shocking action.  Additionally, the Invisible Woman is not in this issue at all, or if she is, she’s so undercover and thoroughly cloaked that we can’t know it.  This is one of those times when the Fantastic Four are divided by dire circumstances, and that never leads to anything good—but I’m waiting to see if there might be some trick to what we’re allegedly going to see in FF #42.

Fantastic Four #41: Who Watches the Watchers When They’re Not Watching?