Fantastic Four #43: Doom it May Concern 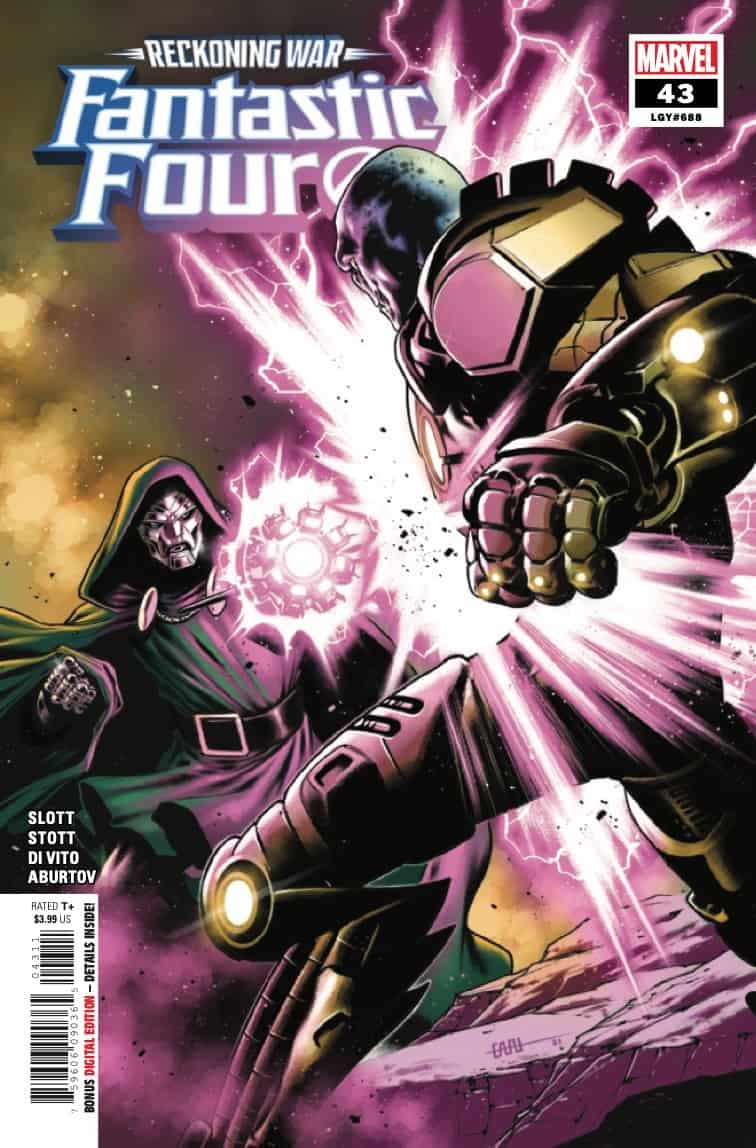 Sixty years ago this month, the Fantastic Four first met their greatest foe:  the Monarch of Evil, Doctor Doom!  This chapter of “The Reckoning War” coincides with Doom’s first appearance (as it was no doubt planned to do) and spotlights the role of Earth’s greatest villain in the conflict that’s tearing the universe asunder.

He handles it pretty much the way you’d expect Doom to do.

We begin with the alien Cormorant, whom we last saw destroying the previous Baxter Building and proving to be unstoppable when the FF and Doom went up against him in issue #25, in Washington, DC, flattening the former Great Lakes Avengers and painfully ripping off the alien armor-weapons of some characters named Gauntlet and the Grasshopper.  (Ow, that had to hurt!  Those armor parts were apparently grafted to those characters’ bodies!)  The things the Cormorant literally ripped off of them were apparently Watcher/Prosilican technology as old as the universe itself, and there is one last component that the Cormorant and his master, the Helmsman, are looking for:  something called the Tactigon, which right now is in the Florida Everglades, in the possession of Dr. Doom.  Of course Doom knows the Cormorant is coming and is just waiting for him…

Meanwhile, the Reckoning member called Ruin, with some of the Brotherhood of Badoon, has invaded the Baxter Building and taken Alicia, Franklin, Valeria, and the Grimm kids prisoner.  He would like to sabotage the Forever Gate, which the FF constructed out of a Nexus of Reality, and hasten the destruction of the universe.  Unfortunately for him, the mysterious “Protocol Zero” that Reed had Valeria initiate last issue, has made that impossible.  So instead, Ruin uses the last of the portal’s energy to teleport himself to the scene of the final battle of this ancient war, leaving the Badoon to destroy Alicia and the kids.  Franklin and Valeria bolt through the Gate themselves, using its lingering vestige of power to jump through it in the wake of their foe, while Jo-Venn and N’Kalla mop up the Badoon.

In that sealed-off sector of the cosmos called “the Barrens,” Reed, the Thing, She-Hulk (my critique of her excessively massive and muscled frame as drawn by Rachael Stott still stands), and the gravely wounded Jack of Hearts face a slow death from the Barrens’ energy contamination.  Reed notes that even if they could escape, the limitless knowledge that he appropriated from the Watchers will soon be the end of him just the same.  It doesn’t look good for this part of our cast.

On the Watchers’ home planet, Nick Fury, “The Unseen,” works to free our Watcher from the endlessly looping “What If?” that the other Watchers have jacked him into.  At first he succeeds in ending the playback loop and causing it to play what came after the end of that scenario.  The Watcher sees that in that alternate reality, the limitless energy source that that counterpart of Reed used to create a Utopian Earth overloaded and destroyed the world!  So our Watcher did the right thing, intervening in the first coming of Galactus to Earth after all!  Emnu the Watcher doesn’t want this information getting out, and prepares to execute both Fury and our Watcher to keep the secret.  But he is thwarted by…Sue Richards, the Invisible Woman, with a ray gun powerful enough to take down a cosmic-level being!

Ever since Reed sent her incognito a couple of issues ago, this is what Sue has been up to:  shadowing Fury in case of just such a situation.  It may be disconcerting to see Mrs. Richards packing heat and shooting a Watcher, but we must remember that our heroine has for years had a side gig as a spy, for which there was a whole miniseries a couple of years ago.  There’s something else that Emnu and the other Watchers didn’t want anyone to know about:  a master Nexus of Reality called The Apex, to which all such nexi are connected.  Sue guesses that instead of actually destroying the universe, what the Reckoning is really after is control of the Apex.

Elsewhere, the former Prosilicans and the Watchers prepare for a final showdown, while the Human Torch, Thor, the Wiccan, the Hulkling, the Shi’Ar Imperials, the Unparallelled, the Starjammers, various Heralds of Galactus, and the road company of Hamilton (just kidding about that last one) are joined by Ego the Living Planet in taking the final battle to the Reckoning.  Man, this is going to be one crowded showdown.

Back to the main event of our story.  Dr. Doom battles the Cormorant, who seems to be winning, but the whole thing turns out to be a feint.  Doom has deliberately used “the Tactigon” to lure the Cormorant in so that he can hack into the interstellar comm signal between the Cormorant and the Helmsman and use his sorcery to conjure the Helmsman to Earth.  He puts the other alien in a mystic circle where Doom confiscates his mask, then banishes him.  (Doom doesn’t care when the Helmsman proclaims that in defeating him, Doom has earned the right to see his adversary’s face, which you realize means this is going to become important in some future issue.)  The mask is what Doom wanted all along.  It is the means of controlling the Cormorant.

Then, in a surprising switch, Doom gives the mask to the Cormorant and strikes up an alliance in which the two of them will snatch victory from the Watchers and the Reckoning!  Yep, only Dr. Doom would be slick and cunning enough to make an end run around both warring factions and try to snatch all the power for himself.  This is a classic Doom move.

And that moves us all into next issue, which will be double-sized for the grand finale of this whole thing. 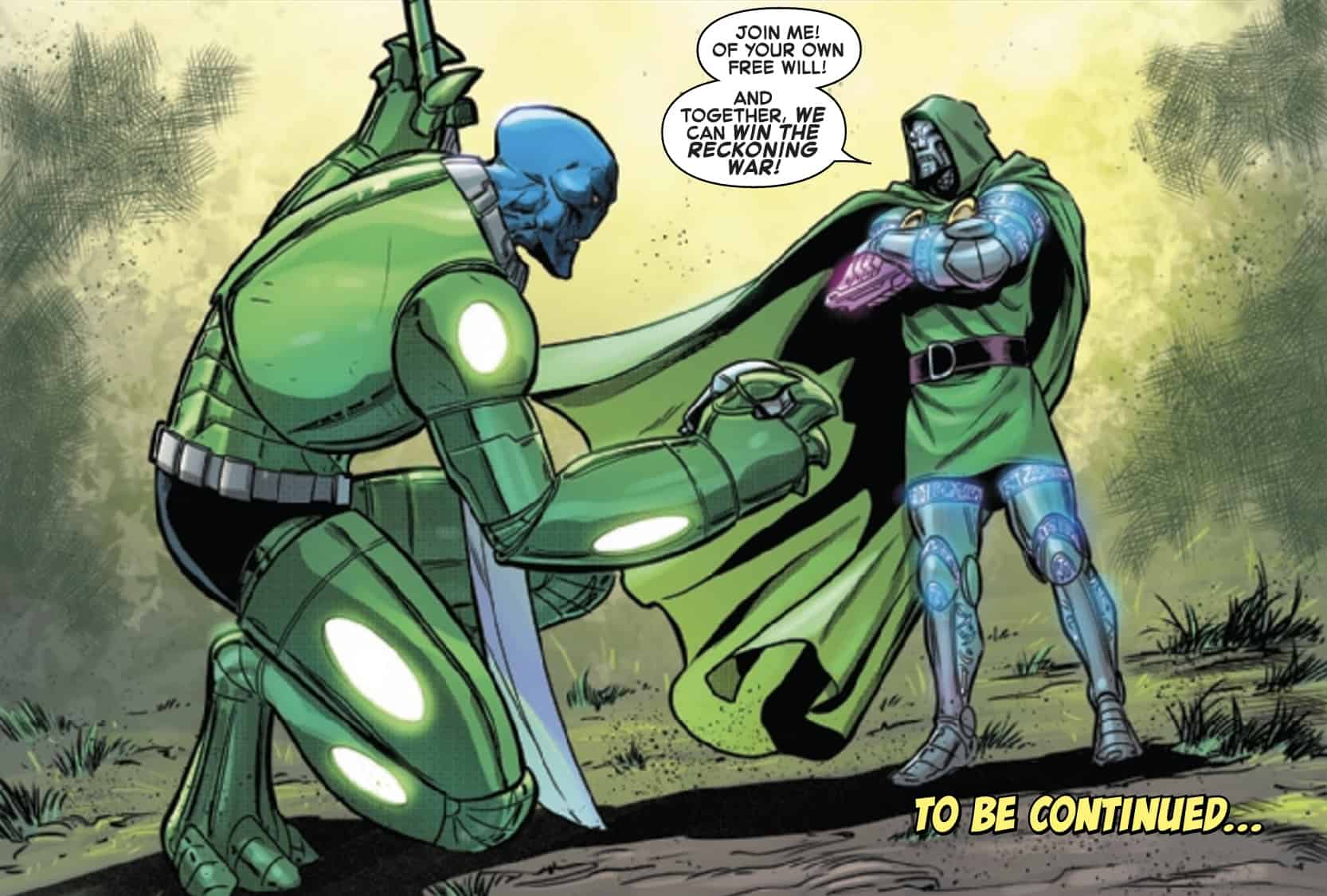 Dr. Doom saw “The Reckoning War” coming from a light-year away, but has been keeping his cards close to his vest this whole time.  He knew all this was looming over the universe back in FF #25.  He was preparing for this when he proposed marriage to Victorious back in FF #32.  He knew there was a war coming up that would engulf the whole universe, and if he played his cards right he could just swoop right in and take all the marbles.  Isn’t this just perfect?  I mean, this is what Dr. Doom always does.  If he can’t mug someone for ultimate cosmic power (as he did the Silver Surfer and the Beyonder), he maneuvers so that he can grab the McGuffin that will give it to him or put it in his reach.  This is Doom, and this is one of the reasons we love him.  He always thinks that if there is some ultimate power, or some source of ultimate power, he and he alone has the right to possess it.  No one else should have it; Doom is its rightful master and user because he is Doom.  The guy is, as Sue Richards once called him, “the greatest evil the world has ever faced,” but you’ve got to respect someone with that much self-esteem.

As a personal note, I must say that of all the evil-doers in fiction, Doom has always held the most special place in my heart.  He was always Stan Lee’s favorite too.  In the book Bring on the Bad Guys, the Origins of Marvel Comics volume devoted to the villains, Doom is very rightly the subject of the first chapter, and Stan calls him “the Professor Moriarty of Marvel Comics.”  Dr. Doom is our most complex figure of ultimate evil.  He is a super-narcissist, his armor not only giving him power but providing him with a barrier against the rest of the world, which he considers dirty, vulgar, corrupt, and desperately in need of him and him alone to clean it up and redeem it.

The world needs to be ruled by Dr. Doom.  No one else knows what to do with it.  That’s the way Earth’s greatest arch-villain thinks.  In FF #84, Doom thinks of his sometimes rebellious subjects in Latveria, How ungrateful are those who will not accept the rule of Dr. Doom.  Do I not give them shelter, provide them with food?  And all that I ask is total, blind obedience!  In the Mark Waid/Mike Wieringo saga of “Unthinkable,” he thinks of the U.S. as “the United Kennel of America.”  It is Doom’s heartfelt conviction that the world will be a better place under his absolute, iron rule.

That is, of course, after he has crushed the infernal Reed Richards and destroyed the accursed Fantastic Four.  The man has his priorities.

The medium of comics is filled with great villains who have done any number of unspeakable, heinous things, posed monstrous threats to Earth and the entire universe, and been opposed by the most valiant of heroes.  But you know…you can have your Luthors and Jokers, your Green Goblins and Kingpins, your Red Skulls and Magnetos and Kangs and Ultrons, your Lokis and Darkseids and Thanoses, and every other bad guy and gal of every stripe.  Not a man Jack of them, though, can ever hold a candle to Victor Von Doom.  He is the evil above all other evils, and he was tailor-made as the arch-foe of the greatest of all heroes, the Fantastic Four.  Doom has been a menace to Earth and a would-be ruler of the universe itself for sixty years now.  Whatever smacks him down, he always gets back up, more powerful and more dangerous than he was the last time.  For six decades he has been the best and baddest of all the bad guys, and this issue reminds us of why only Reed Richards and the FF are really, finally a match for him.  And that’s as it should be.  He’s Doom. 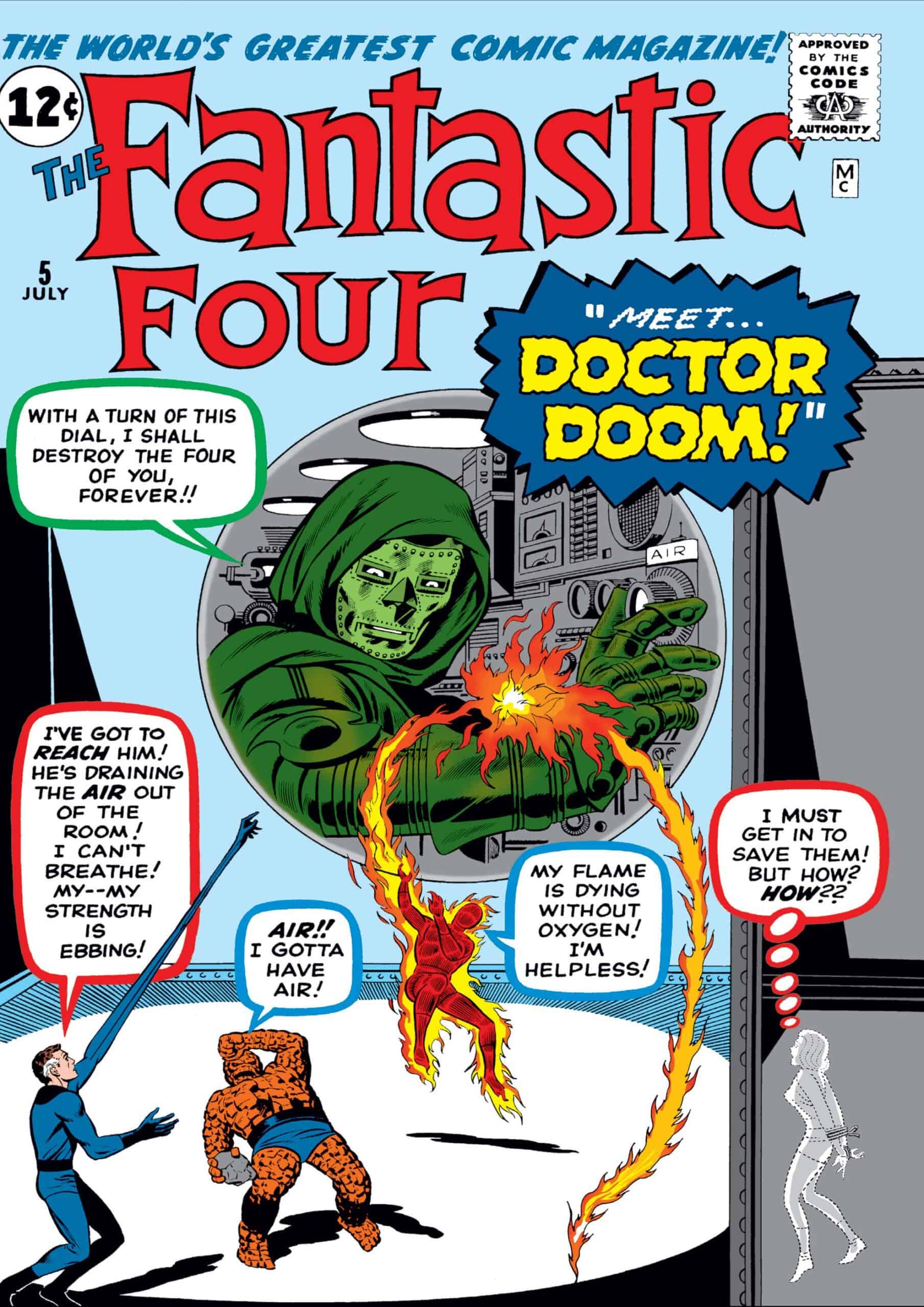 Happy 60th Anniversary to the villain of villains, Dr. Doom!  Always stay just as bad as you are!

As we noted earlier, next issue is going to be mighty crowded.  In addition to seeing how Dan Slott will get Reed out of this mess, we’ll also see all sides of “The Reckoning War” converge on the planet of the Watchers, and learn the ultimate fate of all the Watchers and the forces of Wrath.  We can pretty well expect that Doom won’t end up with all the marbles as he’s planned, but his part in it should be fun to watch.  And that will be the start of another Fantastic Four summer.

Fantastic Four #43: Doom it May Concern