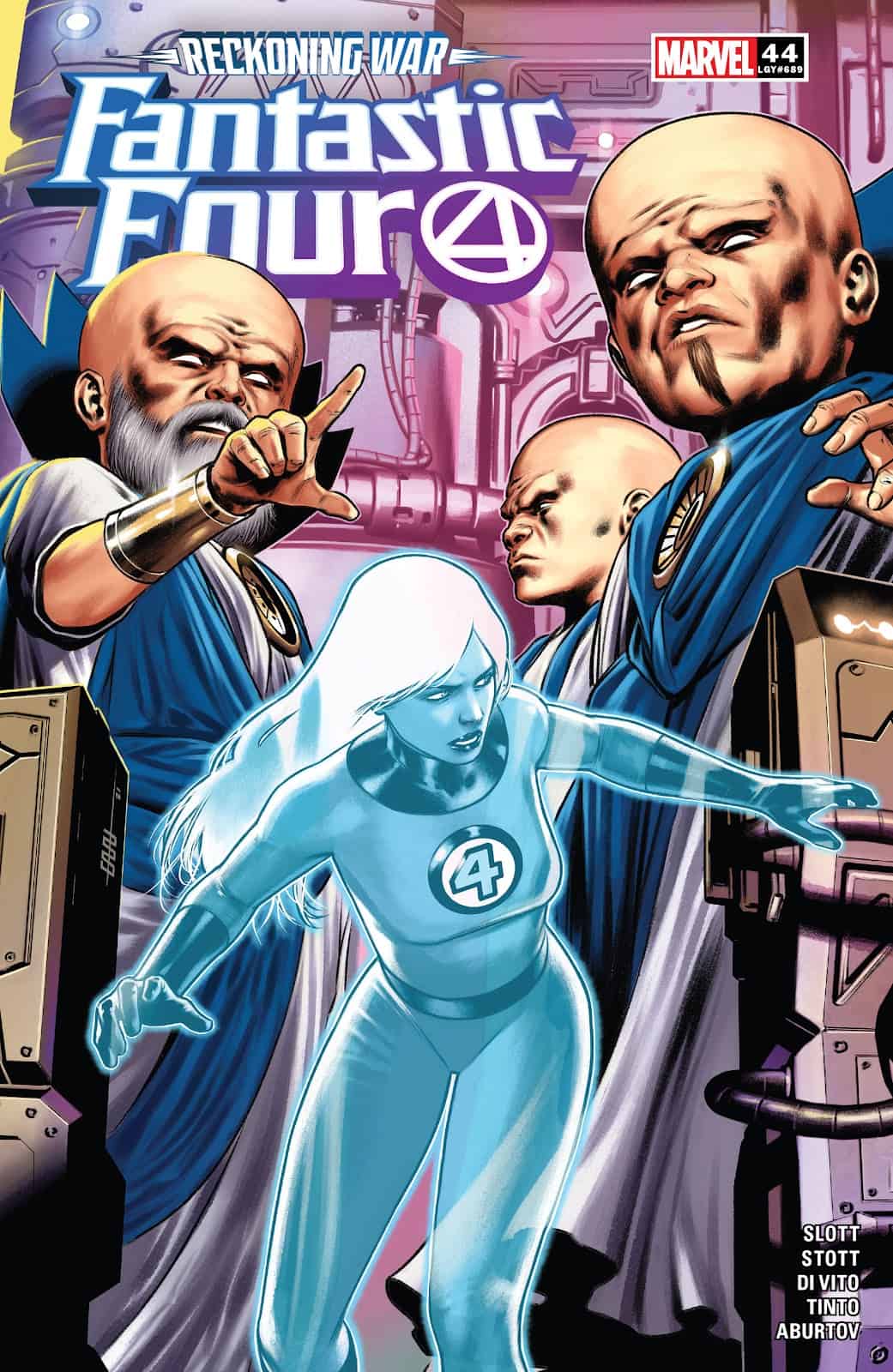 Storylines and plot threads that Dan Slott has been weaving through the different comics that he’s written for the past decade are all converging on this issue.  Everything is falling into Fantastic Four #44 as if it’s a black hole of storytelling.  But is that turning out to be a good thing?  Let’s have a look.

The Apex of All Reality, where all timelines of the Multiverse meet, has become the hotspot of the universe where everyone wants to be.  The Silver Surfer, bearing the Ultimate Nullifier, leads The Destruction (a mash-up of Galactus and the Destroyer into a mindless colossus with a one-word vocabulary) to it with a trail of Power Cosmic.  The Reckoning member called Ruin thinks he has arrived there—but Franklin and Valeria have tricked him by rigging the Forever Gate to take all of them to “Thought Space” instead.  And guess what—in Thought Space, where your thoughts become reality, Franklin is omnipotent again, which may be ruinous news for Ruin.  Reed, being slowly killed by his Watcher omniscience, rigs up another Forever Gate to take himself and the Thing to the Apex.  He needs Zero Energy to power it, which is where the moribund Jack of Hearts comes in.  Once Jack has gotten Reed and Ben through the Gate, Jack zaps the protesting She-Hulk through it as well.  (While I continue to protest the chunky, clunky, bulky figure with which She-Hulk is being drawn.)  And finally, Wrath and his entourage show up at the Apex, zapping the gathered Watchers with a piece of the M’Kraan Crystal, and being met by Dr. Doom and the Cormorant, both ready for battle.  Doom naturally wants the Apex for himself. 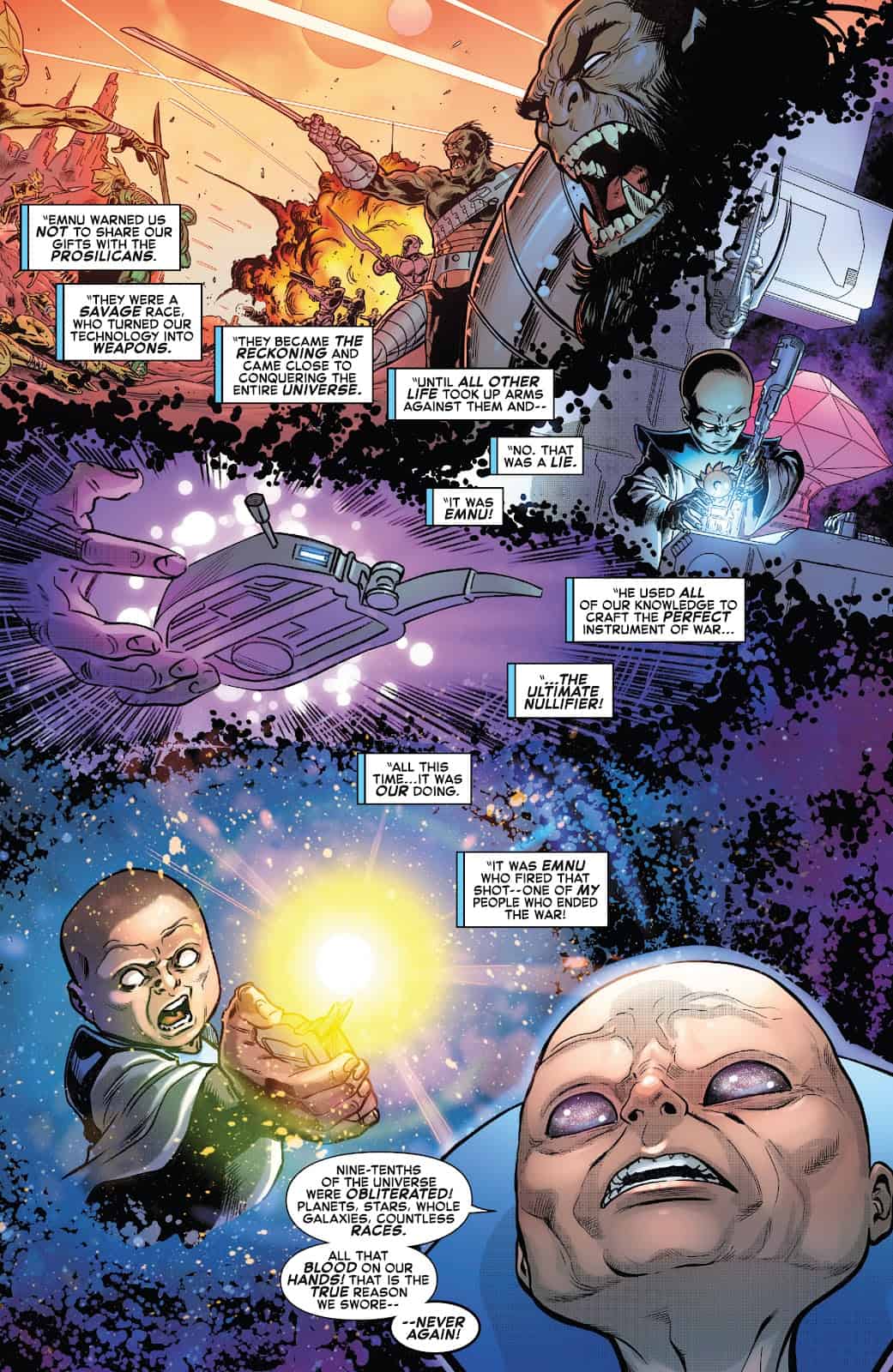 Sue, who’s been at the Apex with Nick Fury and our Watcher since last issue, objects both to Reed’s new look and the impending doom that he’s taken upon himself.  Our Watcher telepathically hooks up with his brethren and sisters and reveals to them that it was Emnu who ended the first war with The Reckoning by destroying 90 percent of the universe with the Ultimate Nullifier—which he invented!  (More about this and other things in the Review.)  Meanwhile, Wrath, the ringleader of this whole madness, and his posse make short work of the Cormorant, paralyzing him; and disarm Dr. Doom of the Tactigon, much to Doom’s chagrin.  The incoming Silver Surfer finds his board slashed in half by Rapture and drops the Nullifier.  Just as Rapture attacks the Thing, she discovers that her war blades have disappeared—or rather, they’ve been cloaked by the Invisible Woman.  When Rapture drops her suddenly invisible weapons, Sue leaves the Thing to battle her.

That’s when The Destruction shows up to obliterate everything.  Right behind him are the Human Torch and the army of cosmic heroes that he gathered last issue.  That leaves Reed, Sue, She-Hulk, and the Silver Surfer to battle Wrath, who forces his way through them and the Torch to get to the Apex.  After downing Rapture, the Thing picks up the Ultimate Nullifier which the Surfer dropped—but Reed takes it from him and meets Wrath at the aperture of the Apex.  Here, the dying Mr. Fantastic triggers the Nullifier and… 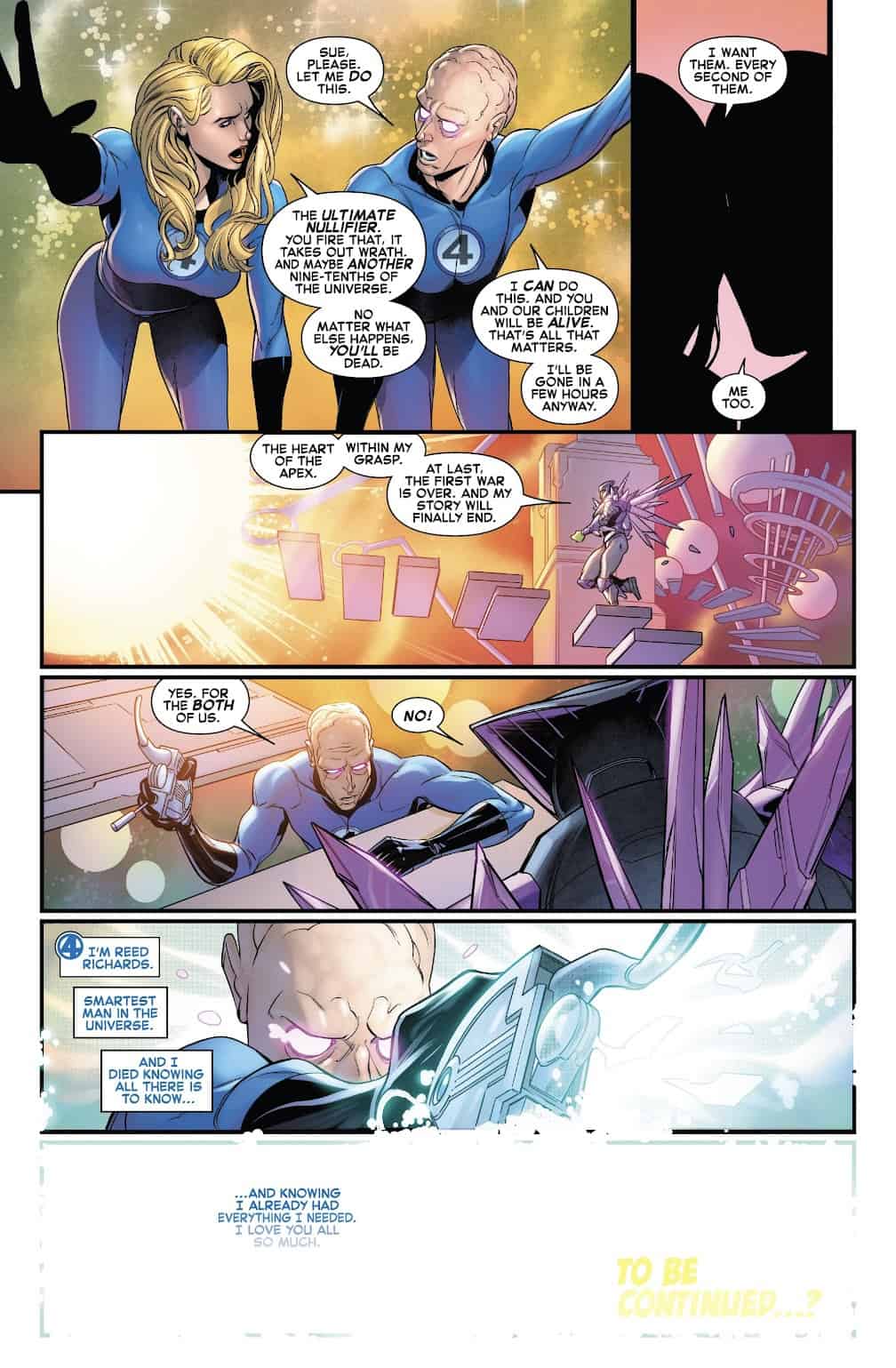 And we’ll have to see what happens next issue!

May we talk for a moment about the Ultimate Nullifier?  Since the Torch purloined it from Galactus’s home station and Reed waved it under Galactus’s nose to blackmail him in the classic Fantastic Four #50, this mega-McGuffin has been one of the most feared objects in the Marvel Universe.  Stan and Jack offered no explanation for its origins; we knew only that Galactus kept it in his home to keep others from getting it because it was the one thing he feared, sort of like the way you’d lock up firearms in a strongbox to keep children from getting hold of them.  As of this issue, the backstory on the Nullifier is in a state of contradiction and confusion.  A partial explanation of it came in Fantastic Four Vol. 3 #49 when Galactus mysteriously called it “as much a part of me as my heart itself.”  Which didn’t really tell us anything, but this story is telling us something very, very different.  The Nullifier is the invention of…a Watcher?  Really?  And it is the real reason why the Watchers—or most of them—have so rigorously pursued their course of only observing the universe and never participating in it? 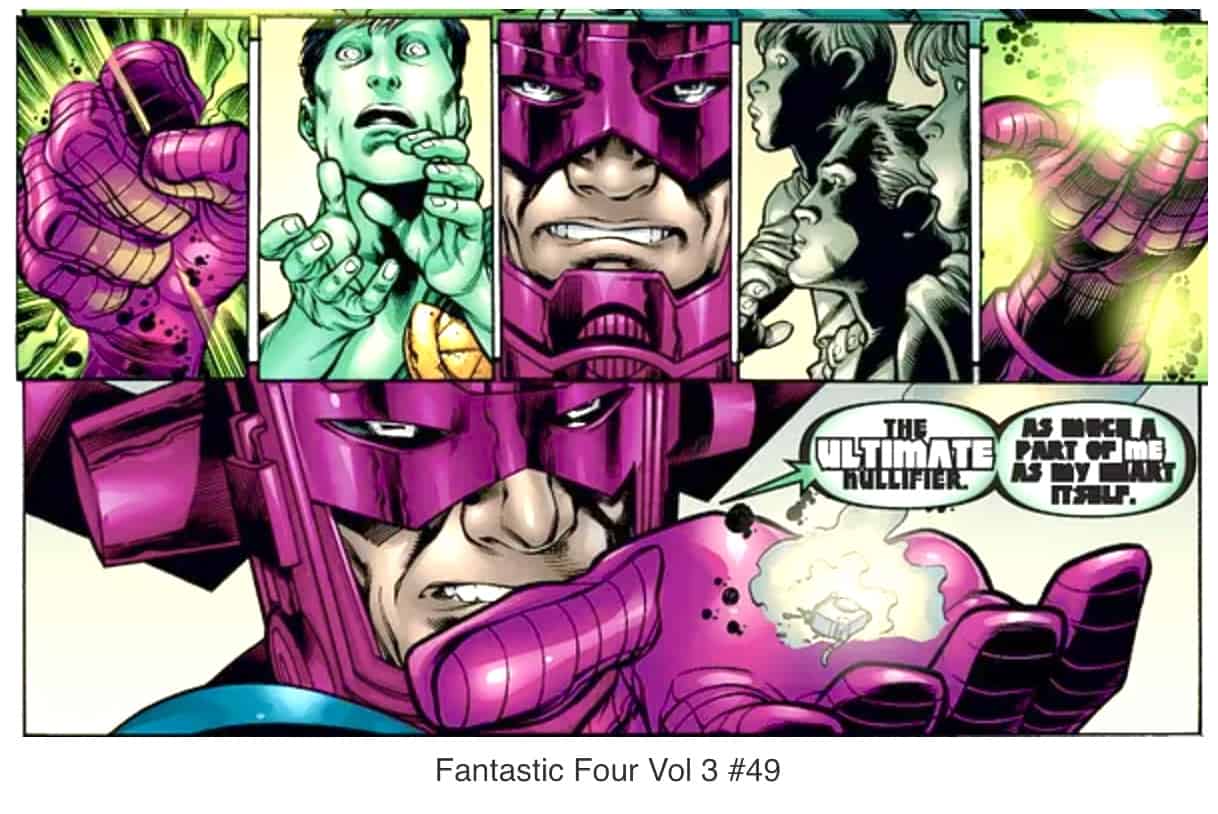 If that’s the case, then how did Galactus get it and why does he refer to it as a part of himself?  Why would he say that if it was really something out of a Watcher’s workshop?  This is Dan Slott rewriting history again, and it is as vexing as that business a while back about Franklin not being really a mutant.  I still don’t understand that particular bit of hand-waving.  But we’ll talk about that another time.

I was rather looking forward to the grand finale of the whole “Reckoning” saga, which Dan Slott has been working towards for a long time.  When I first read the story of the origin of The Watcher (or his people) in Stan Lee’s Son of Origins of Marvel Comics (1975), I thought someone should follow up on the tale of the Prosilicans, whose fate was supposedly the reason why the Watchers took such a hands-off policy with the rest of the universe.  What Slott has done in this storyline has taken a catastrophe that brought down one planet and blown it up to super-cosmic proportions until it nearly destroyed the whole universe billions of years ago and now threatens to do it again.  A lot of what goes on in comics today is revisionist history and this amounts to one more rather extreme revision.  Still, the bit about the Ultimate Nullifier is bothersome.  When people do things like this, they turn continuity into a constantly shifting landscape where everything can become something other than what you thought it was at a moment’s notice.  You’ll remember they did this same thing in the Empyre saga when the Cotati garden, which was supposed to be on some distant planetoid, turned up on Earth’s Moon along with the ancient Kree city instead.  And I seriously wonder why we readers should even invest ourselves in the Marvel Universe or care about it when whatever we learn about it may prove to be something entirely different later on. 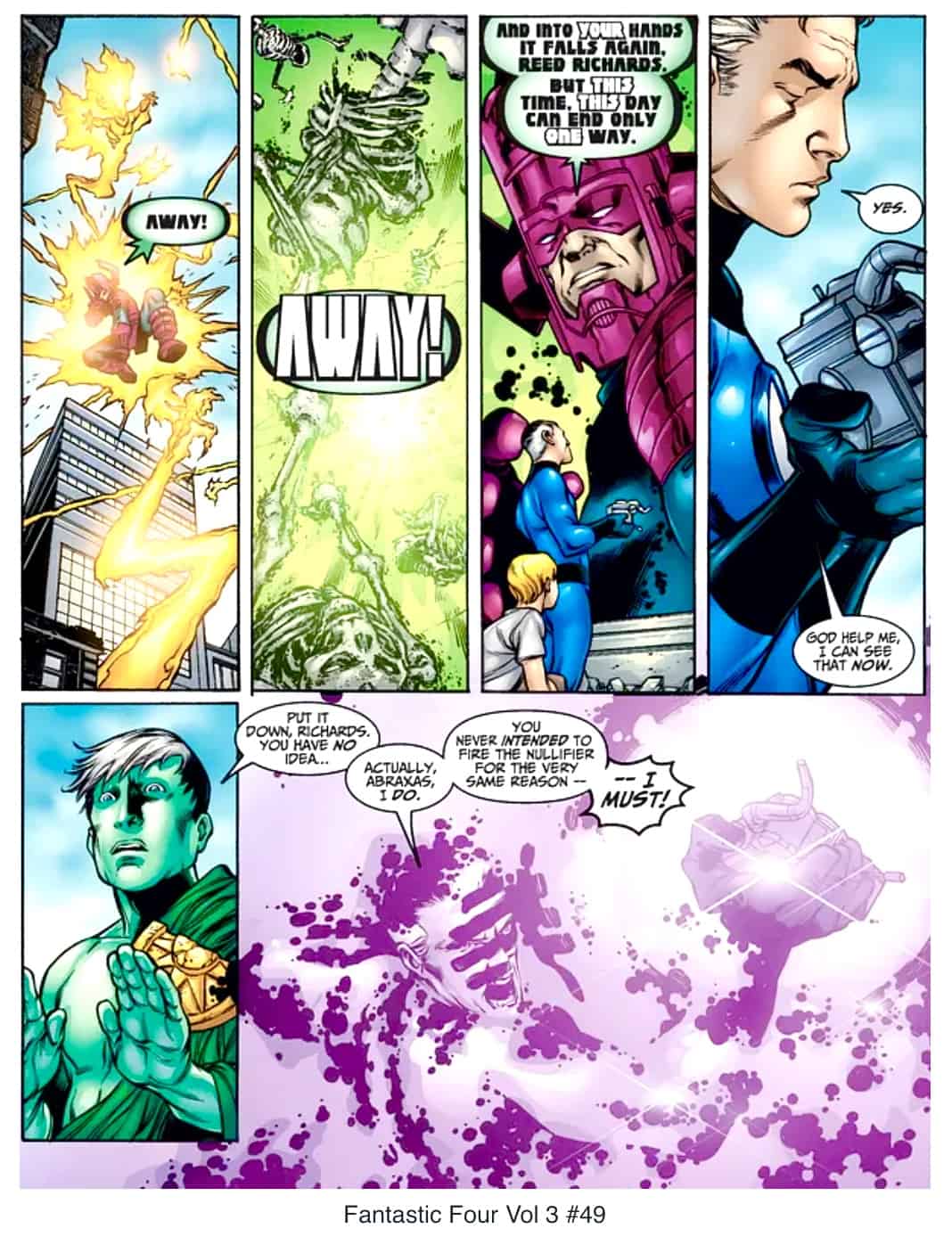 The whole tableau of storylines going back for ten years converging on this one issue reminds me of the third Matrix movie, The Matrix Revolutions (2003), this massive, thunderous, cataclysmic upheaval of a story which was such a spectacle so huge and overworked and overblown and overwrought that it was exhausting to watch and defied any emotional response.  I felt the same way reading this story as I did watching that movie.  The whole universe comes crashing down around a single comic book, which ends with Reed once again pulling the trigger on the Ultimate Nullifier as he did in that aforementioned FF Vol. 3 #49.  In that story, Reed’s action destroyed time and space and hit the “reset” button on the cosmos, resulting in teenage “Marvel Girl” Valeria being turned back into an unborn baby in Sue’s uterus, making the Invisible Woman the only fictional character (that I know of) to have been pregnant with the same child twice.  (Let’s see daytime TV pull off that one!)  What’s going to be “reset” this time?  (The Human Torch’s powers, I hope.)  But you know the one thing that would have made this issue so much more satisfying?

Any issue of The Fantastic Four deserves the very best artwork that can be had.  But especially an issue like this.  The way She-Hulk is drawn as an ungainly, un-shapely mass of muscles is bad enough, but the whole thing is a letdown.  I keep saying this, but this issue especially, why do they keep throwing artists like the ones for this issue at Marvel’s best book?  It’s not just She-Hulk; the Thing looks like a lumbering mass of orange clay, and the drawings of Sue in some panels are just painful to look at.  There are so many truly great artists who could be drawing this mag.  Why couldn’t the artists of this issue be deployed to some lesser creation and one of the better ones be assigned full-time to the book that defined what a Marvel comic book IS?  FF #44 is an overwrought story with art that is unimpressive in some places and mortifying in others, a story that swung for the bleachers but is an aesthetic strike-out.  Dan Slott has two more issues of this book to go (as it was just announced), and I only hope that for his remaining issues he can go out on more of a visual high note than this story is hitting.

This issue contains everything and everyone but the kitchen sink and destroys it all.  Next issue is about how it’s all put back together.  (And maybe we’ll get the real deal on the Ultimate Nullifier?)  One can only hope it finally comes out looking better than it does in this issue.