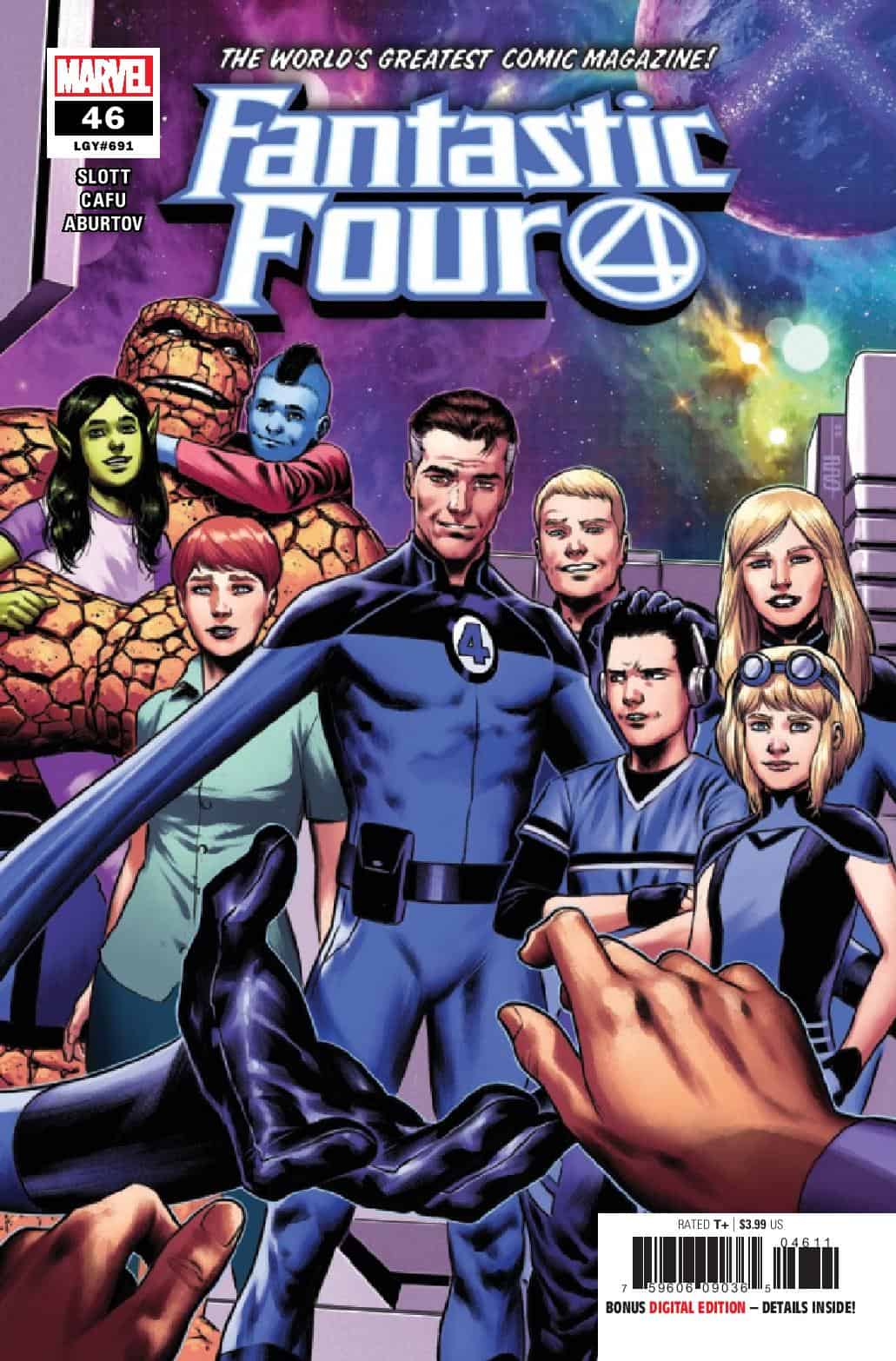 It's the end of an era! Fantastic Four renewal architect Dan Slott bows out, having reinstated Marvel's First Family to their rightful place of prominence - but not before one last swing for the fences!

That’s a concept that might seem quaint or passe in modern times, but it’s at the heart of Marvel’s First Family, right there alongside being Atomic Age space explorers. At their cores, Ben Grimm, Johnny Storm, Sue Storm, and Reed Richards are one big, dynamic, dysfunctional, loving family. They always come together at the end of the day, because no matter what the universe throws their way, they know they’re stronger together than apart. Cliche? Maybe. Corny? In the eye of a cynical beholder, perhaps. But it’s true, and it’s what sets the FF apart from their superpowered peers for over six decades now.

When the FF was put on the shelf for three long years, it was a devastating indictment that Marvel, for whatever reason, couldn’t figure out how to connect that core concept with fans anymore. Previous creative teams had tried to find new creative sparks with hum-drum success. Jonathan Hickman, architect of the book’s last great run, brought their prominence to a crescendo in Secret Wars in 2015-16, which ostensibly ended with Reed, Sue, and their kids sailing off into the forever skies of tomorrow to explore the infinite. It was a sweet send-off, but the undercurrent that maybe they’re going away because Disney and Fox are at daggers drawn with each other loomed omnipresent: Was the FF being shelved because Disney and 20th Century Fox were cinematic competitors? Was Marvel purposefully not publishing a Fantastic Four book out of spite, or to not provide a competitor with free advertising? Hell, what would a Marvel Universe even look like without the FF?

But over the previous couple of decades, the Fantastic Four had lost their prominence as the cornerstone of the Marvel Universe, and the X-Men and then the Avengers became the company’s standard-bearers. Changing times and shifts in generational attitudes had rendered the FF on the verge of being considered obsolete. If nothing else, they’d lost their cache and standing, and despite robust showings from the likes of Mark Waid, J. Michael Straczynski, and even Mark Millar (not to mention a much-ballyhooed but misguided attempt at Ultimate-izing them), the team just couldn’t quite catch readers’ imagination again.

Dan Slott, though, knew the key to success wasn’t in trying to reinvent the wheel. It wasn’t in trying to make them “hip and cool” to appeal to new readers, or give them flashy new costumes, or have them team up with Wolverine, or whatever flash-in-the-pan short-term solution other minds came up with. No, Slott did exactly what Marvel should have done in the first place: lean in hard to what makes the team great in the first place: family, exploration, and big drama. Oh, and the villains: the Fantastic Four boasts one of the finest rogues’ galleries in the annals of comics – Dr. Doom, Galactus, Psycho Man, Kang, Annihilus, Namor (some days), the Skrulls, the Kree, and so many more. And all of them have made appearances (some more than once) throughout Slott’s four-year run, and all of them have been used in fun and creative ways. Remember the time Invisible Woman rendered Dr. Doom’s armor transparent for all the world to see? You can bet Victor did.

But the secret ingredient to Slott’s run wasn’t just a nostalgia romp. Throughout his tenure, he’s been frantically adding new pieces to the FF’s cosmic puzzle with a zealous streak of creativity matched by very few writers in modern times. That potent mix of new and familiar, set against a backdrop of celebrating and embracing what makes the FF great, has created a run for the ages.

Of course, not everything has worked out perfectly. I’m not a fan of Franklin no longer being a mutant (particularly right after the FF and X-Men had a four-issue tug-of-war over him in X-Men/Fantastic Four),  and Johnny’s tryst with the bride of Doom – while hilarious in its way – felt like a regression for a character who seems to be caught in a decades long perpetual will he/won’t he grow up cycle. But for the most part, what worked, worked. Ben and Alicia’s wedding was pure poetry and the most flawless fulfillment of their decades-long romance possible, as was their adoption of Kree and Skrull children to build a family of their own. Johnny’s doomed-from-the-start relationship with Sky of the Spyre was particularly poignant, and the Forever Gate was a welcome addition to FF lore – even if it did smell ever-so-slightly like a similar plot device from Hickman’s run. Heck, even the slight retcon of the FF’s origin to encompass Spyre’s science-city felt inspired and a strong addition rather than forced.

And so now Slott’s run concludes, not with a bang, but rather with another issue affirming the title’s commitment to family as its bedrock principle. It was revealed in issue twenty-five that Reed had a previously-unknown (biracial!) half-sister, and here, she’s introduced to the family (and readers) at last. Marine biologist Joanna Jeffers is thrown haphazardly into the FF’s world almost by accident; Reed comes to meet her and makes the mistake of assuming she’ll want to become part of their world, if even for a short while. Not so fast: Joanna is her own woman, and she’ll not be sublimated by the excesses of the superhero lifestyle. What follows is a heartfelt, emotional treatise on what exactly defines a family – is it blood, fictiveness, or some mixture of both? – as only the Fantastic Four can do it: from outermost space to the Quantum Realm and back again, in one deftly-paced issue, Dan Slott gives us everything we need to know about the Fantastic Four in twenty-two short pages. And, because that founding principle of family first is so ironclad, the story works not because of any ultra-clever storytelling backflips, but rather due to its inherent strength.

And that, folks, is why the Fantastic Four have persevered and overcome four three-score and one years: the stuff they’re built out of is just that strong. When Jack Kirby and Stan Lee invented the team, they probably didn’t know they were catching lightning in a bottle. But they did, and fans and pop culture have been reaping the benefits ever since. Some conceits are so strong, they surpass current fads and remain evergreen because they speak to something elemental: Batman, Superman, Wonder Woman, Spider-Man, Captain America, the X-Men, and the Fantastic Four are those conceits for the American superhero idiom. Nothing else comes close.

Along the way, Dan Slott has been gifted with some truly wonderful artists (and a couple that weren’t quite up to the cache of illustrating the World’s Greatest Comic Magazine, but that’s okay). This final issue, he gets to work with illustrator CAFU, colorist Jesus Aburtov, and omnipresent Marvel letterer Joe Caramagna, who deliver a wonderful curtain call. CAFU is the kind of artist who can do it all: big walloping space vistas, intimate looks of love and meaning between husband and wife, the Thing, asleep with cats scaling him like some orange Mount Kilimanjaro. CAFU’s art is chef’s kiss; he’s been at this for quite some time and clearly knows his stuff. He brings his A-game throughout and gives the FF’s the send off Dan Slott’s run deserves, as do Aburtov and Caramagna. It’s a fitting send-off for the writer who gave the FF a strong sense not just of purpose, but of renewal and reinforcement of what makes them so evergreen to begin with. And with Ryan North and Iban Coello waiting in the wings, there’s a strong sense that the real journey is just beginning.

Fantastic Four  #46 is a deeply-felt send-off for Dan Slott's run, perfectly encapsulating what makes the team so special.  Sincerest tips of the hat to all concerned for making this run so fulfilling, and making the world remember what makes them so great in the first place.