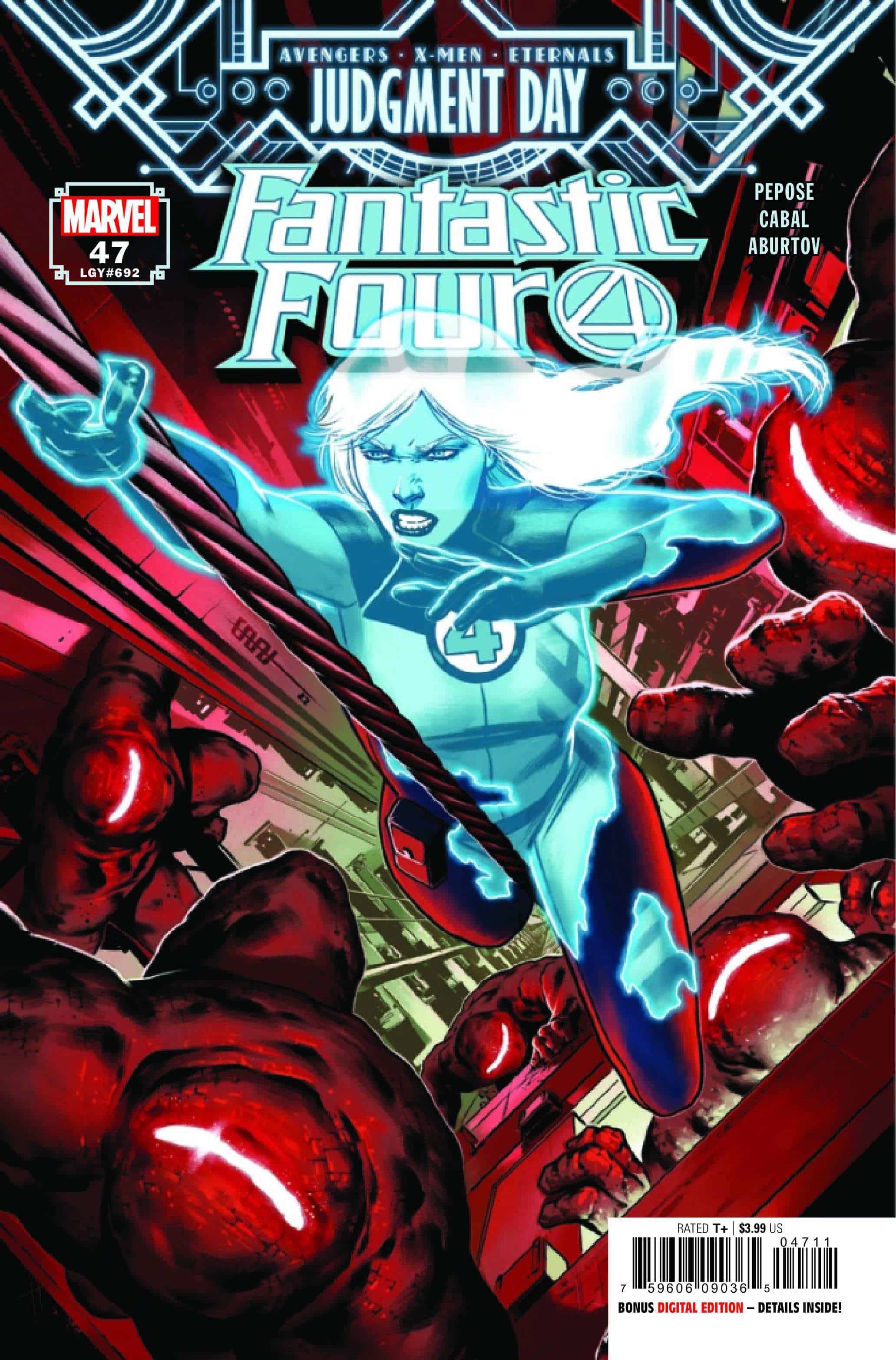 A.X.E.: JUDGMENT DAY TIE-IN! The Taking of Baxter 1-2-3-4 begins now! With judgment looming over the Marvel Universe, Reed Richards has locked himself in his Think Tank in search of answers. But with the fate of humanity on the line, what happens when OUBLIETTE MIDAS sets her sights on the Baxter Building? As the Fantastic Four falls before the Exterminatrix's death traps, only one hero remains standing - but if you thought Oubliette was dangerous, it's nothing compared to what the Invisible Woman is capable of. Get ready for Die Hard in the Baxter Building, as we've only got one thing left to say: Yippie-ki-yay, Marvel Universe. 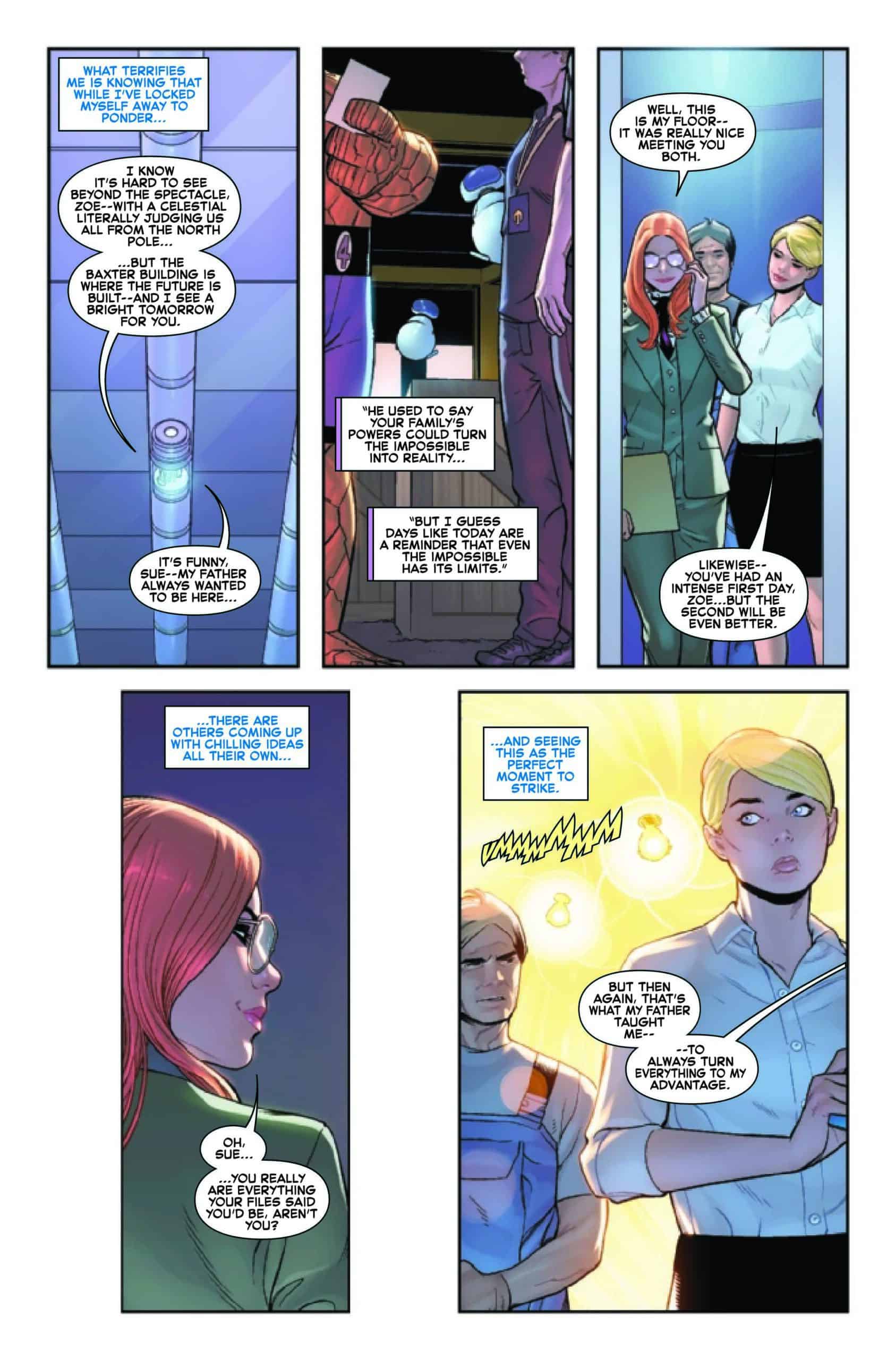 “Die Hard in _______” is a great story idea. The basic premise is easy to replicate (it’s really just a complicated heist story in a confined space with a lone hero to stop the bad guys). But the mood is harder. John McClane is alone, lightly armed, making things up as he goes along, and up against ridiculous odds. He has no reason to believe he can win. But his confidence and swagger are turned up to 11, and his successes always come in the wildest and most extreme ways possible. Of course you can do “Die Hard in _______” anywhere with anyone. But since the Fantastic Four already have their own skyscraper, why not do it Fantastic Four #47.

The heist in Fantastic Four #47 takes place prior to A.X.E. Judgment Day #4. All is not yet lost. But the Midas Foundation isn’t taking a chance. They have their own escape planned, but they want one more thing to take with them and it’s in the Baxter Building. The one person that can stop them? Sue Richards doing her best John McClane impersonation.

Fantastic Four #47 jumps from a surprisingly light hearted intro into full blown action suddenly, and Sue is caught up in the situation before she knows what’s happening, Pepose moves the story along fast from that point and, like Sue, you really don’t have time to think ahead. Thanks to creative planning on the villains’ part, Sue has been relatively isolated, so you’re primarily following her as she confronts enemy after enemy, forced to react because she hasn’t had time to plan.

Exposition comes in dribs and drabs, but its absence is never felt nor does it detract from the story. In fact it allows the issue to race ahead at breakneck speed, revealing the Midas Foundation’s goal only on the final page. This mystery (which isn’t a mystery in the sense that it’s something needing to be solved) helps keep the attention focused on Sue. It doesn’t really matter what the Midas Foundation wants because we only care about what Sue is doing to stop them.

Like Die Hard, Fantastic Four #47 isn’t so much about whether the good guy will stop the bad guy (because in this kind of a story the ending is pretty much a foregone conclusion) but about how Sue is going to do it and how much fun we’re going to have with her along the way. Pepose writes her with no shortage of confidence, and every little success will elicit a satisfied smile on the reader’s part.

Fantastic Four #47 does have one shortcoming that stood out as I read it, though. The issue stays with Sue the vast majority of the time, but it takes place against a backdrop of Reed reflecting mostly on his wife and why he loves her. Given the dire circumstances hanging over the planet, this sentiment makes perfect sense. But there are times when it’s overwritten. The issue doesn’t have a “show don’t tell” problem–Pepose is showing us exactly what Sue is capable of and it’s a fun thing to see. Rather it’s more of a “show and tell” problem where at times Reed’s thoughts are either long winded or, in a couple cases, not needed at all. This doesn’t slow the issue down–it’s still paced exceptionally well–but there were moments when I kind of wished Reed would shut up.

As the story goes, Fantastic Four #47 is spot on as a Die Hard riff. But if Sue Richards is John McClane, her appearance matters as much as what she’s doing. Cabal nails it. The issue starts in unassuming fashion, and that’s exactly how Sue appears–all smiles with an air of professionalism tempered by genuine caring for the people around her. She greets a new employee early in the issue, and Cabal draws her in a slightly relaxed stance, giving her an air of openness that stands at odds with her as an action hero. This helps sell her moment of total shock when it hits the fan because we saw how she was never on guard. But that look of shock is gone quickly as the story moves her into superhero mode and Cabal imbues her with a take-charge confidence that turns full on swagger as she turns invisible right in front of a row of enemies with guns pointed at her. We know immediately that the Invisible Woman doesn’t have time for this nonsense.

There’s also a fun moment with Johnny that Cabal handles particularly well. Early in the issue Johnny is headed on a pizza run and Cabal expertly captures the “I’m too cool for all of you” attitude Johnny constantly projects. Later, when Johnny attempts to get back in the building and fails in spectacular fashion, the stunned look on his face (which in a cartoon would have been accompanied by stars floating above his head) provides an outstanding contrast to Sue who’s radiating her own “I’m too cool for all of you” attitude on the following page.

As a tie-in to A.X.E. Judgment Day, Fantastic Four #47 is hardly essential. The circumstances provide the impetus for the Midas Foundation’s actions but they ultimately don’t matter to the story that unfolds–which could have been told at any other time. But that isn’t important in the slightest. It’s a fun issue. It’s paced spectacularly. The visuals capture the Die Hard mood completely. And once the action gets going we only care about how much ass Sue can kick.