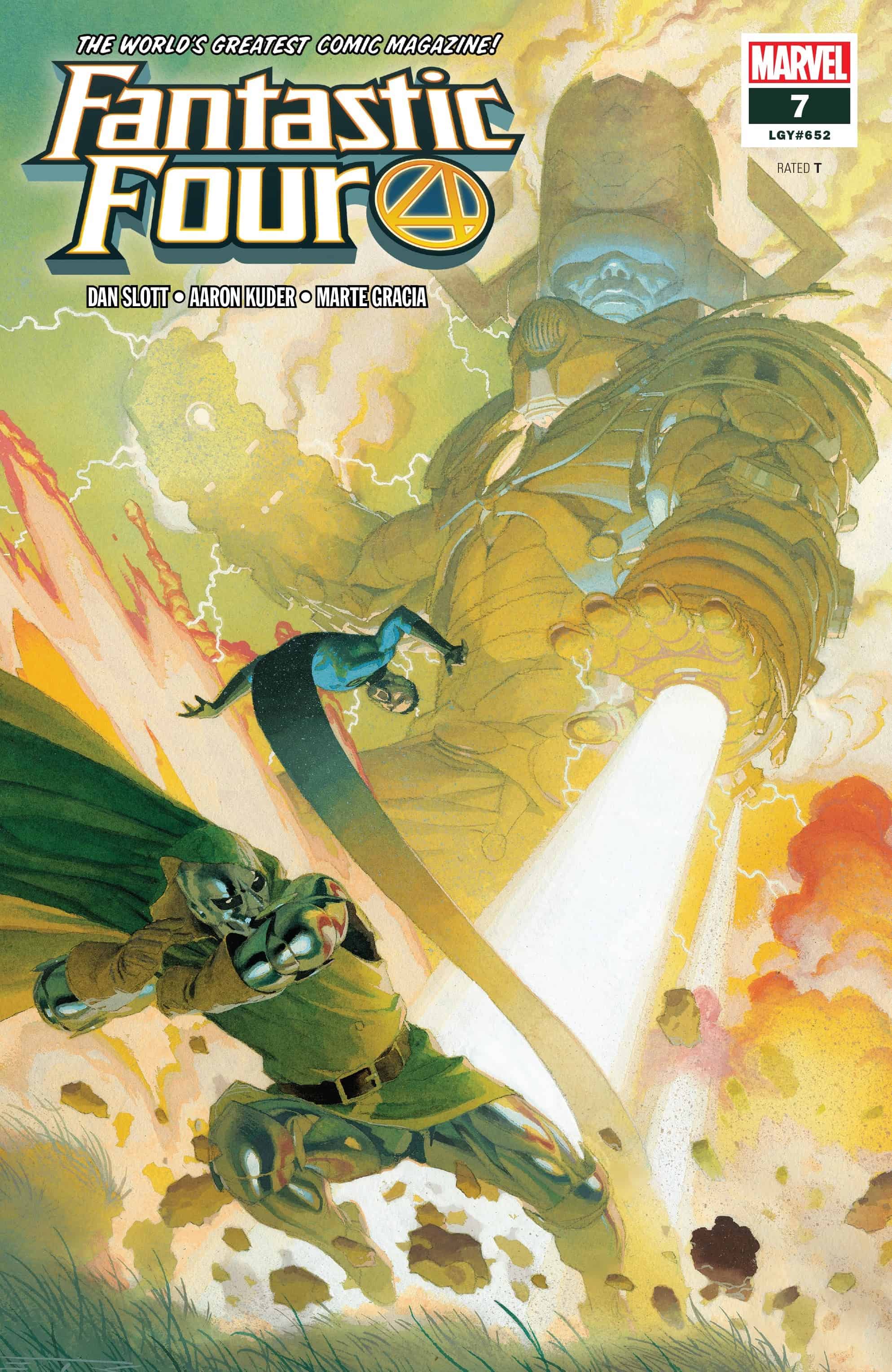 Remember the origin of Dr. Doom from Fantastic Four Annual #2 (1964)?  Remember that part about Werner Von Doom taking little Victor out into the forest, on a mountainside, in the frigid and snowy winter, when the Baron’s troops were after Werner?  And remember how the Romani healer died of exposure protecting his young son, who would grow up to become Earth’s greatest villain?  Well, little Victor Von Doom never forgot, and that mountain where his father died protecting him is going to figure heavily into Dr. Doom’s latest ploy to get the rest of the world under his armored thumb and the Fantastic Four six feet under! 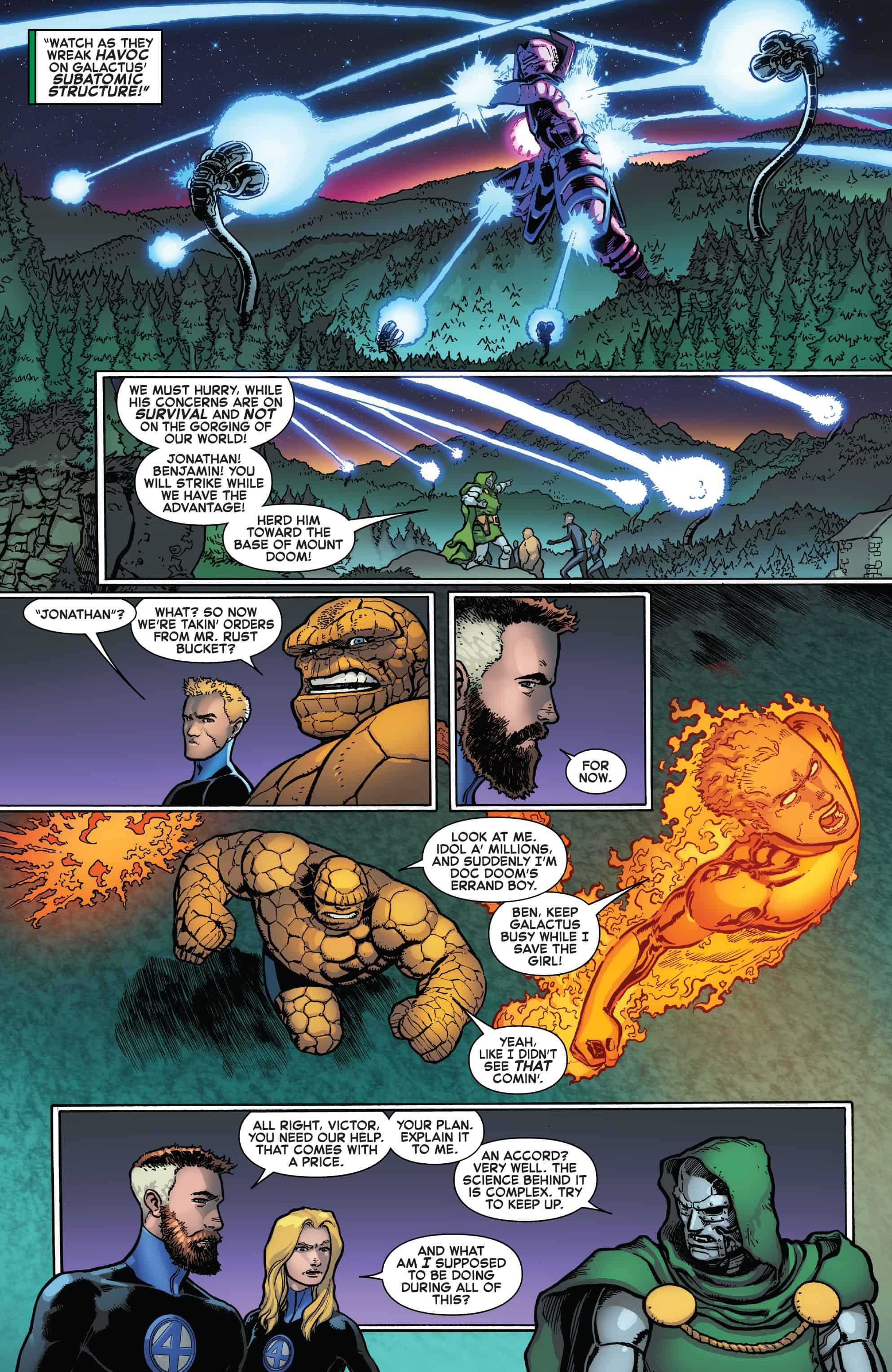 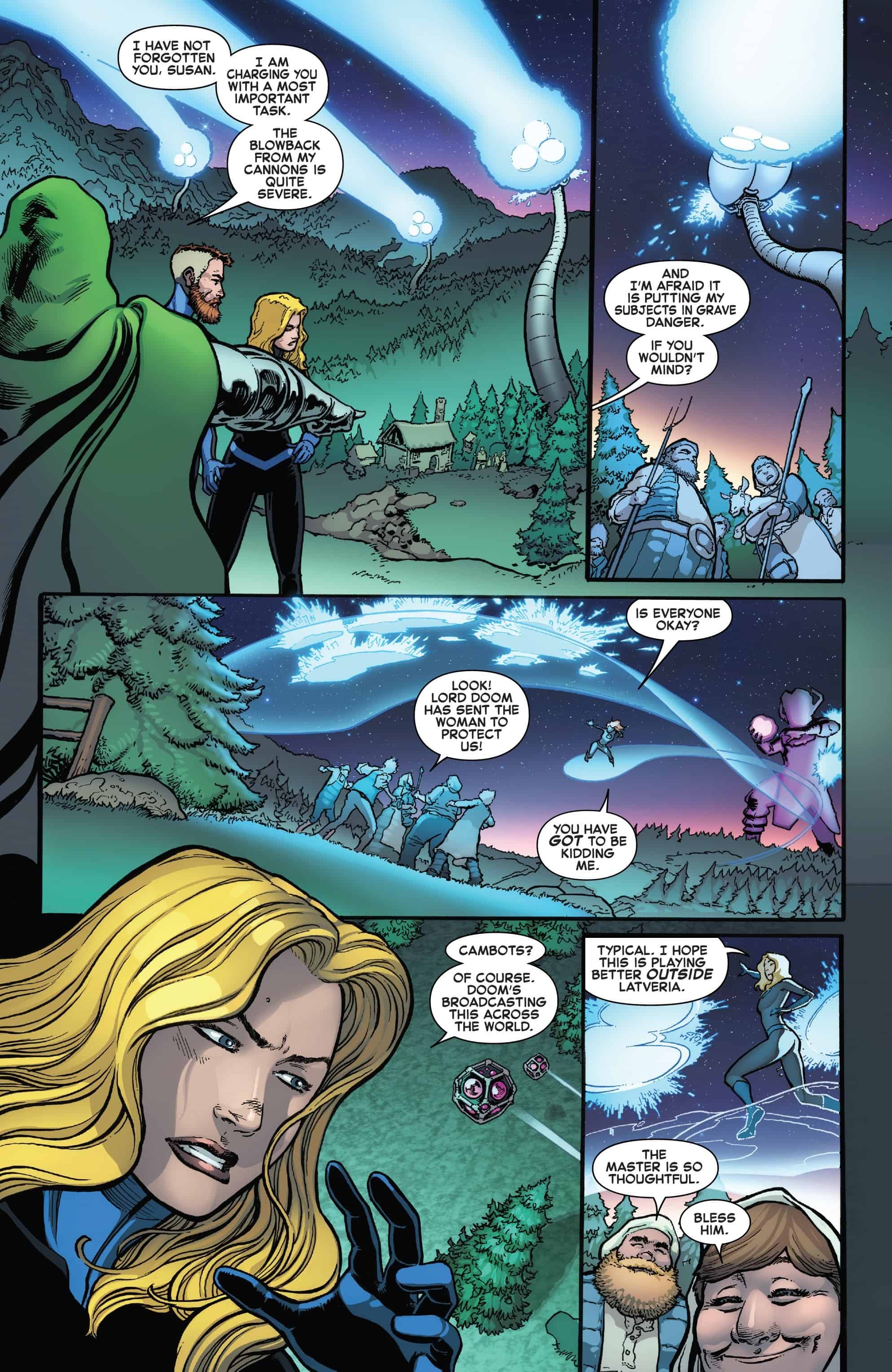 As Doom’s plot unfurls, Galactus is hungering for the artificial Power Cosmic with which Doom has charged his new enforcer, Victorious.  While Galactus is fixated on her, Doom directs the FF to carry out his plan to protect Latveria and Earth.  Reed goes along with it for pragmatic reasons, but is convinced that Doom has not accounted for all the variables in the situation.  Meanwhile, in an intriguing subplot back home, Franklin and Valeria are trying to build a teleporter (cobbled together partly from the parts of Uncle Jake’s truck!) to take them to Latveria to help the FF when Alicia and Wyatt catch them and send them to bed.  The kids strike me as being a bit too old now to be made to go to bed at a specific hour, but the scene sets up an intriguing subplot about something—or some things—lurking outside their window.  They may be things that our phenomenal Foursome has encountered before… 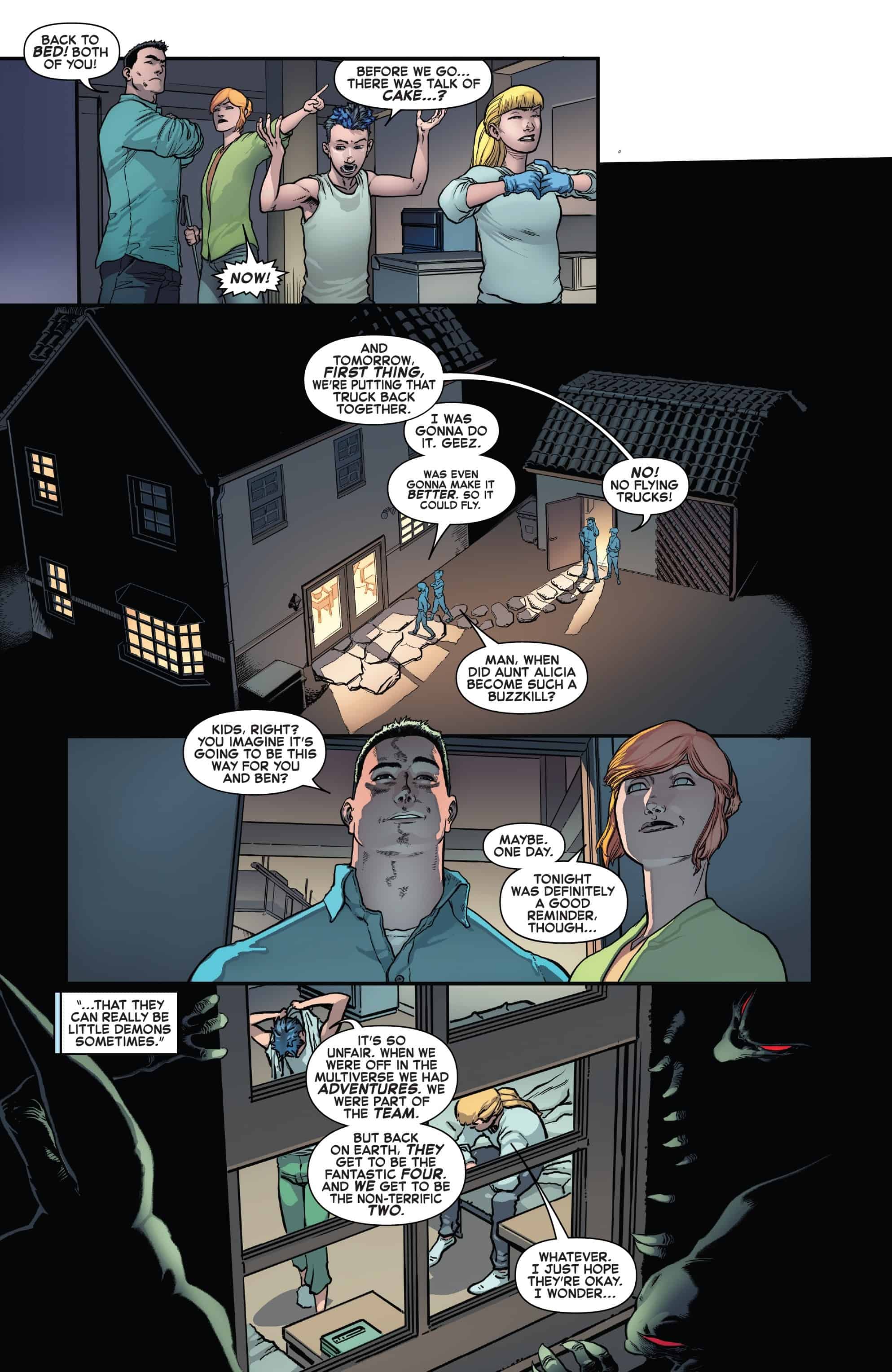 Back in Latveria, while Doom’s “Big Bang Cannons” are playing hob with Galactus’s elementary particles, the Torch rescues Victorious from the planet-slayer’s grasp.  The cosmically empowered woman protests that she didn’t need saving, but she herself saves Johnny from splattering himself at Galactus’s feet after letting loose with a super-nova blast.  As I observed last issue, Johnny and Victorious are a situation we’re going to have to watch.  Doom reveals to Reed that while Reed was away, something happened to Galactus.  The cosmic predator was changed into an entity that feeds life into planets instead of feeding on the worlds he visits.  The how and why of Galactus transforming back into what he was, in such a pathological condition, is not explained.  But the upshot of the whole plan is that while Reed distracts Galactus with a bogus “Ultimate Nullifier” (a ploy that he made once before, in FF #213), Victorious swoops in for a knockout blow that topples Galactus onto that mountainside where Doom’s father died (AH-HAH!), and Galactus phases physically into the mass of the mountain! 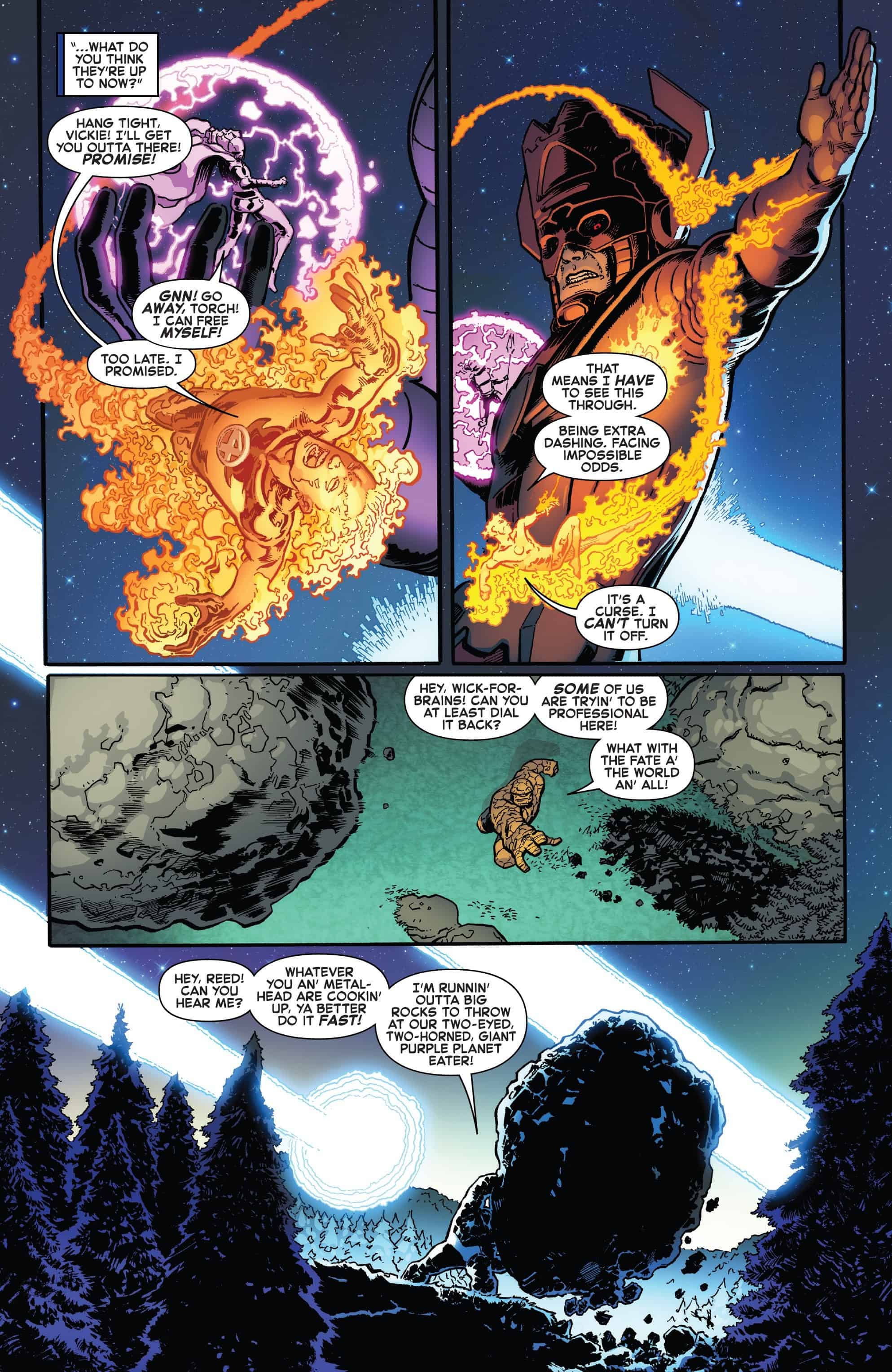 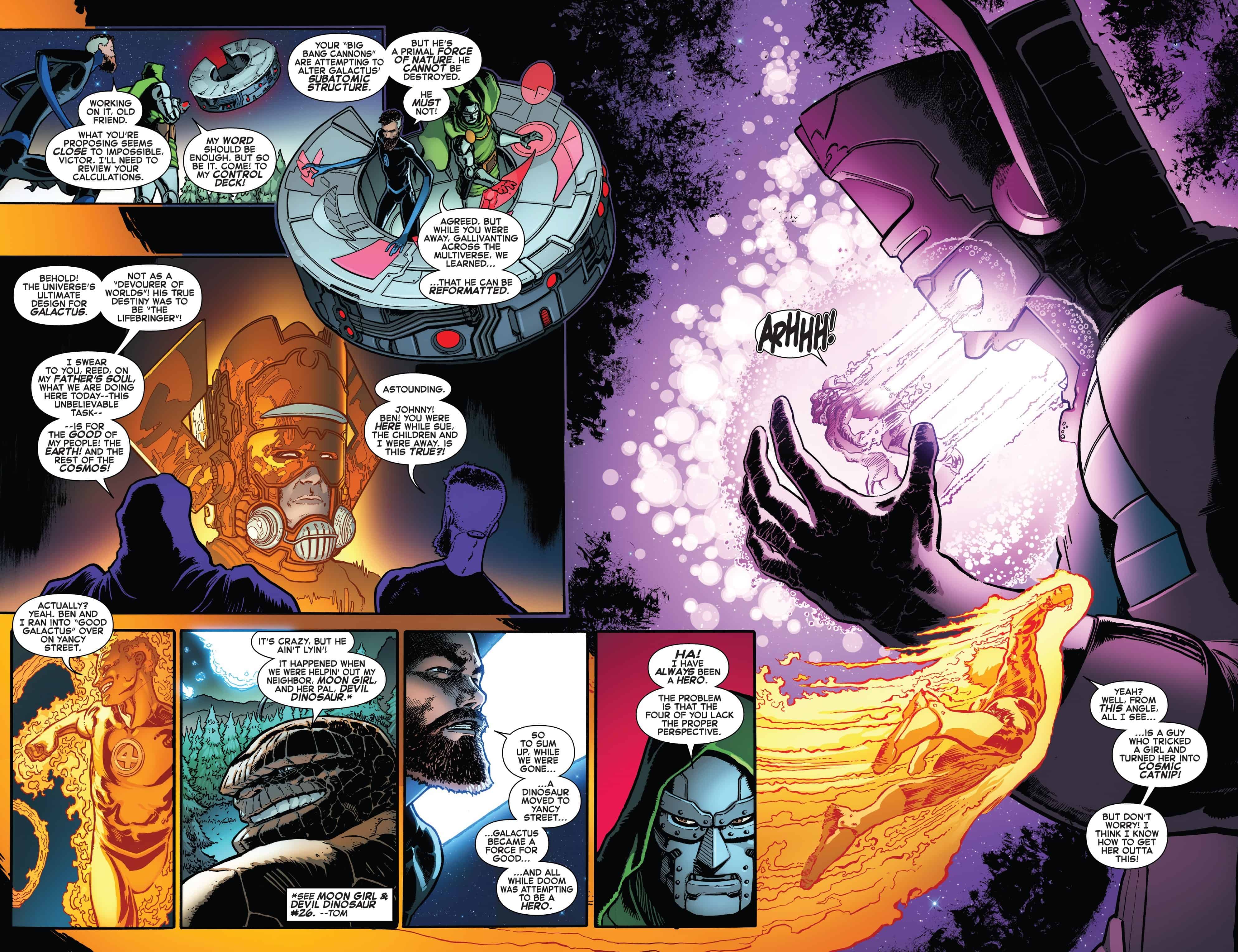 This is where Doom’s plan reaches its payoff.  With Galactus somehow captured, the Monarch of Evil plans to cannibalize him as an unlimited energy source for Latveria and the rest of the world—on Dr. Doom’s terms, of course.  And with his mission accomplished, Doom delivers a zap that knocks the Fantastic Four out.  His edict as King of Latveria is that Earth’s greatest heroes are to be punished for their “invasion” of his sovereign country—with summary execution!  Doom now stands to get what he’s always wanted:  mankind at his knee and the Fantastic Four dead! 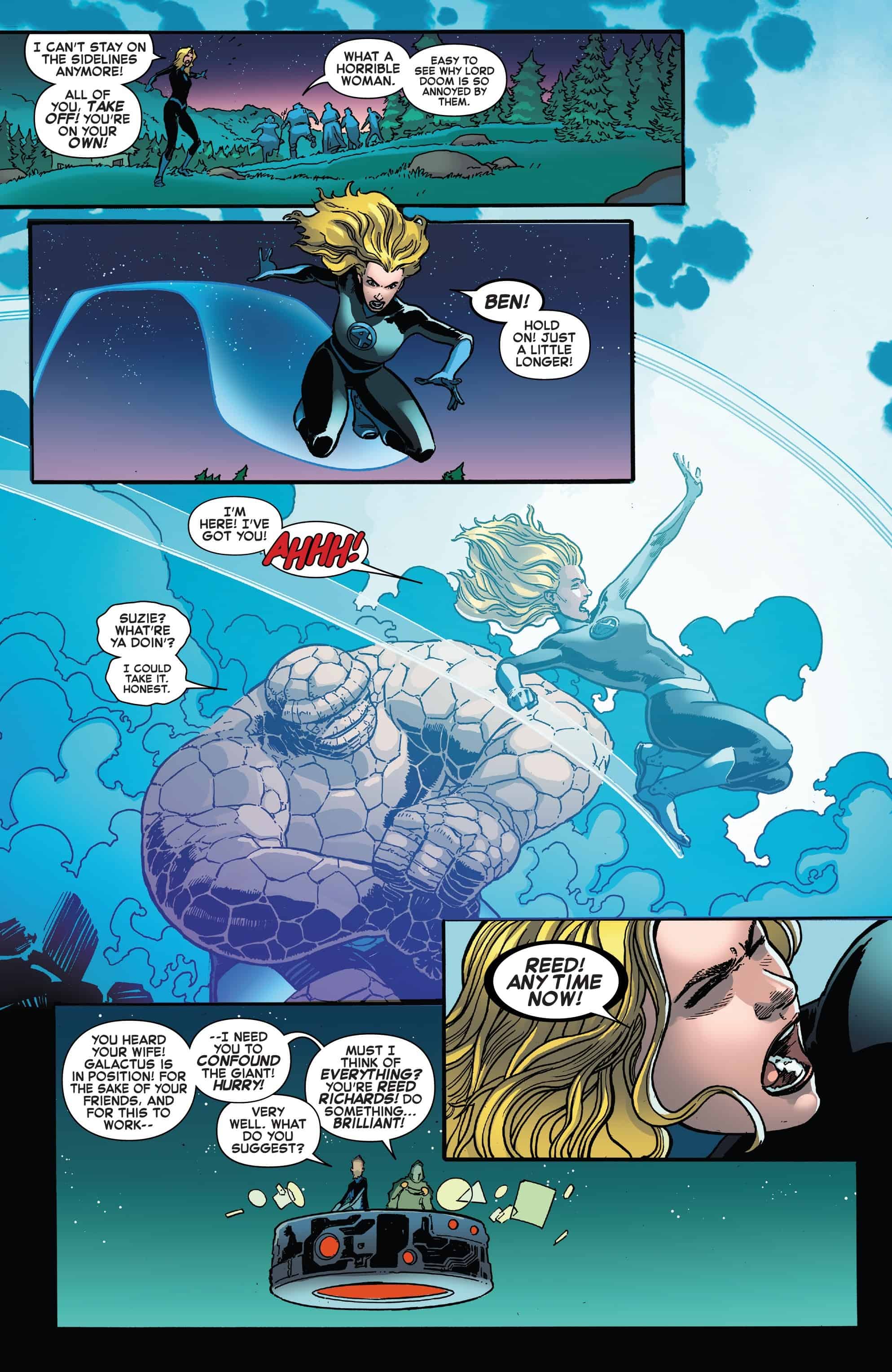 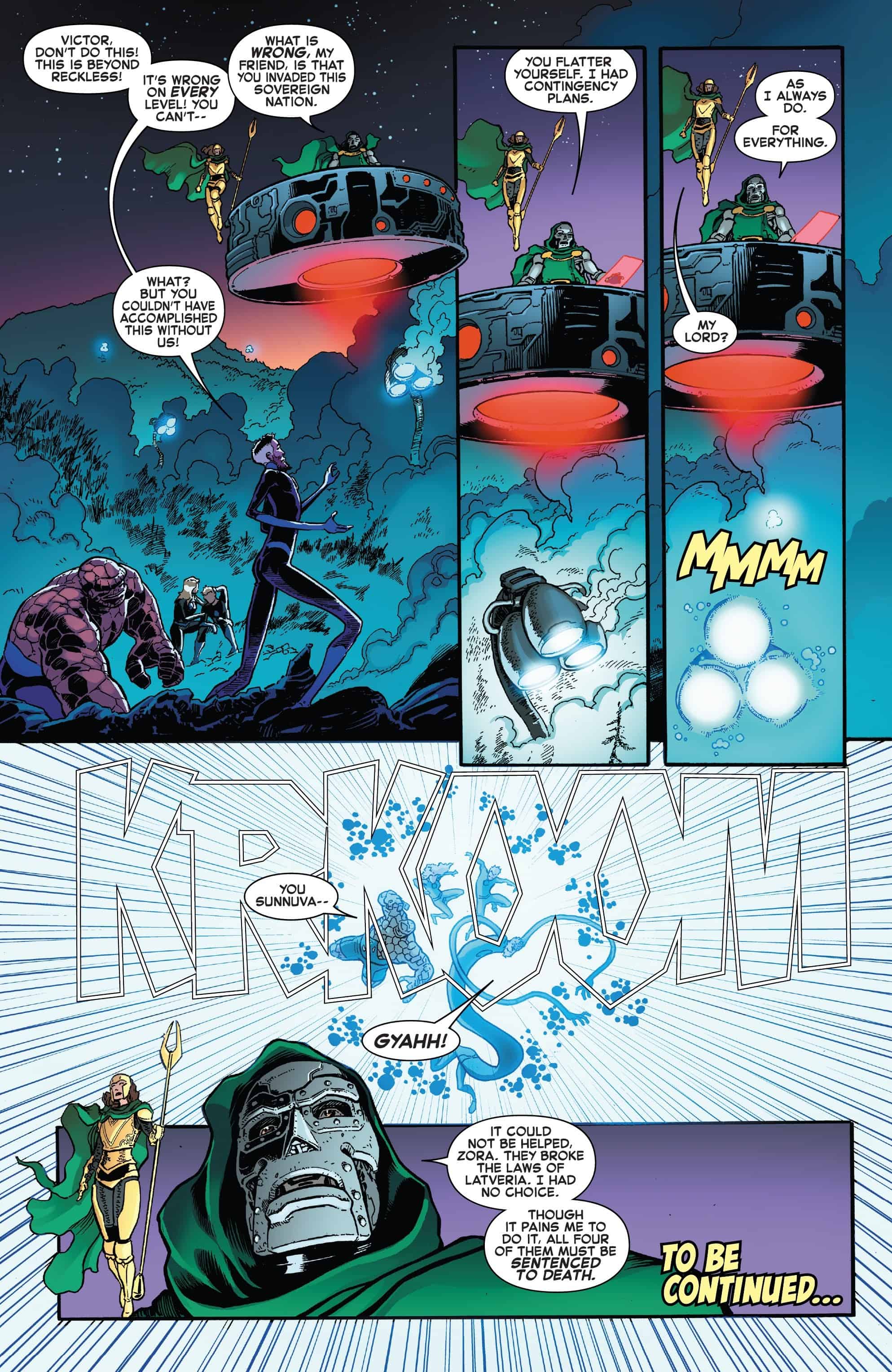 It shouldn’t have taken the ENTIRE month of February to get Fantastic Four #7 into our hands, but this is another issue that reminds us of how great The FF is at its best.  Dr. Doom has presented us with a clever twist on his ambitions by turning Galactus into a global power source that he will offer to the world with demands attached.  In story after story, Doom has taken “ultimate power” directly onto himself to achieve his fiendish ends.  This time he has bypassed and changed up his usual agenda, perhaps understanding after so many failed schemes that always doing the same thing and expecting a different outcome doesn’t work.  Meaning it should be great fun to see how changing his usual plan also doesn’t get him what he wants.  The way he’s inevitably thwarted this time promises to be entertaining.

And you know what’s going on between Johnny and Victorious, don’t you?  That’s going to be a new complication in the lives of our Fantastic Four in the months to come.

However…what about Galactus?  Whatever the Avengers or Ultimates did to make him a “life-bringer” instead of a planet-slayer has clearly left him sick, like an addict in withdrawal, latching onto the artificial Power Cosmic of Victorious the way an alcoholic would desperately suck up the last drops in liquor in a bottle.  Whatever strange and yet-to-be-explained thing has happened to him is bound to be a part of Dr. Doom’s downfall.  Doom thinks he has everyone right where he wants them, but keep your eyes on Galactus in the next couple of issues as Doom’s scheme pans out in a way that the good Doctor did not foresee!

And I’m telling you, that beard on Reed has got to go.  In some panels of this issue, Mr. Fantastic looks like he should be hunched over with a cane, stroking his whiskers, and beginning half of his sentences by wheezing, “Back in MY day, Sonny…”

In spite of the aggravating postponement of its release—the second time Marvel has done this to us since re-starting the FF series, and will they please knock it off?—this is another winning issue.  The art of Aaron Kuder continues to be impressive (Reed’s damn beard notwithstanding); if Kuder continues as he’s doing now, his work will be remembered as being entirely worthy of “The World’s Greatest Comic Magazine!”  And Dan Slott’s stories are humming along, making us want to see what awaits us on the other side of this story that restores Dr. Doom to his role as the baddest of all the bad guys.  We should hope not to have to wait until the end of March to see what happens next.