Fantastic Four Life Story #2: She is Strong, She is Invisible, She is Susan 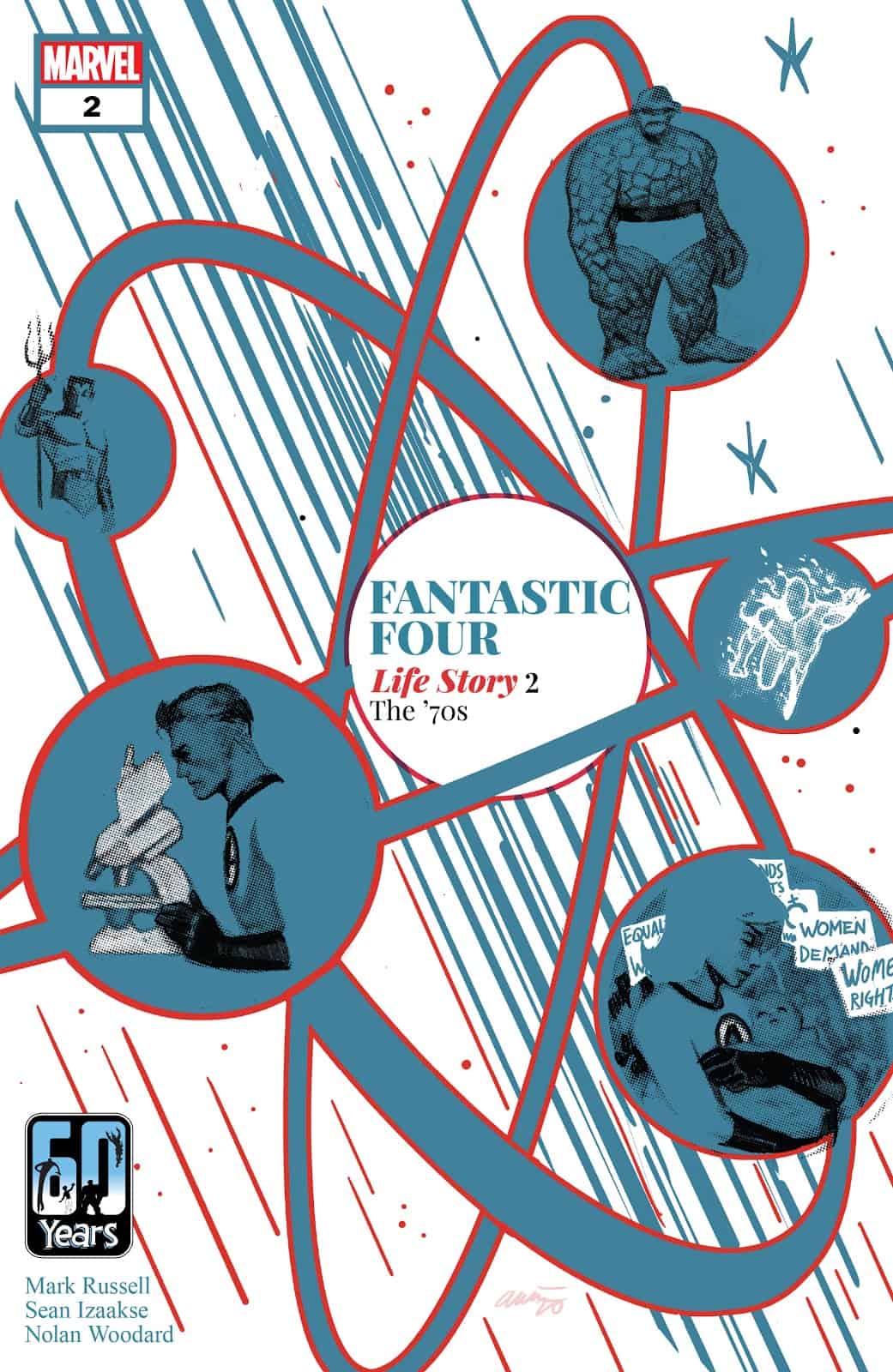 The differences between this account of the history of the Fantastic Four and the actual history of the Fantastic Four are so wild, so radical, so extreme, that I’m not even going to bring them up.  That would be no fun for me to write or for you to read.  So instead I’m just going to launch right into Mark Russell’s version of the FF in the 1970s.

Reed and Susan Richards have settled into married life, with Sue taking primary responsibility for the care and raising of their son, Franklin.  Johnny is playing guitar and hanging out with gurus.  Ben has become a TV star in some alternate-universe version of Bonanza.  While Reed is giving scientific lectures and trying to warn the world about his visions of Galactus, Sue feels as invisible with her powers off as she is with her powers on.  Reed’s colleagues all respond differently to Reed’s account of the world-devouring cosmic force that is coming for Earth.  Tony Stark respects Reed, but thinks the whole idea is crazy.  Dr. Henry Pym is more interested in his own theories about what buried nuclear waste does to ants.  But one other scientist is paying more serious attention:  Victor Von Doom, with whom Reed soon strikes up first a friendship, then a collaboration.  (Cue ominous music.) 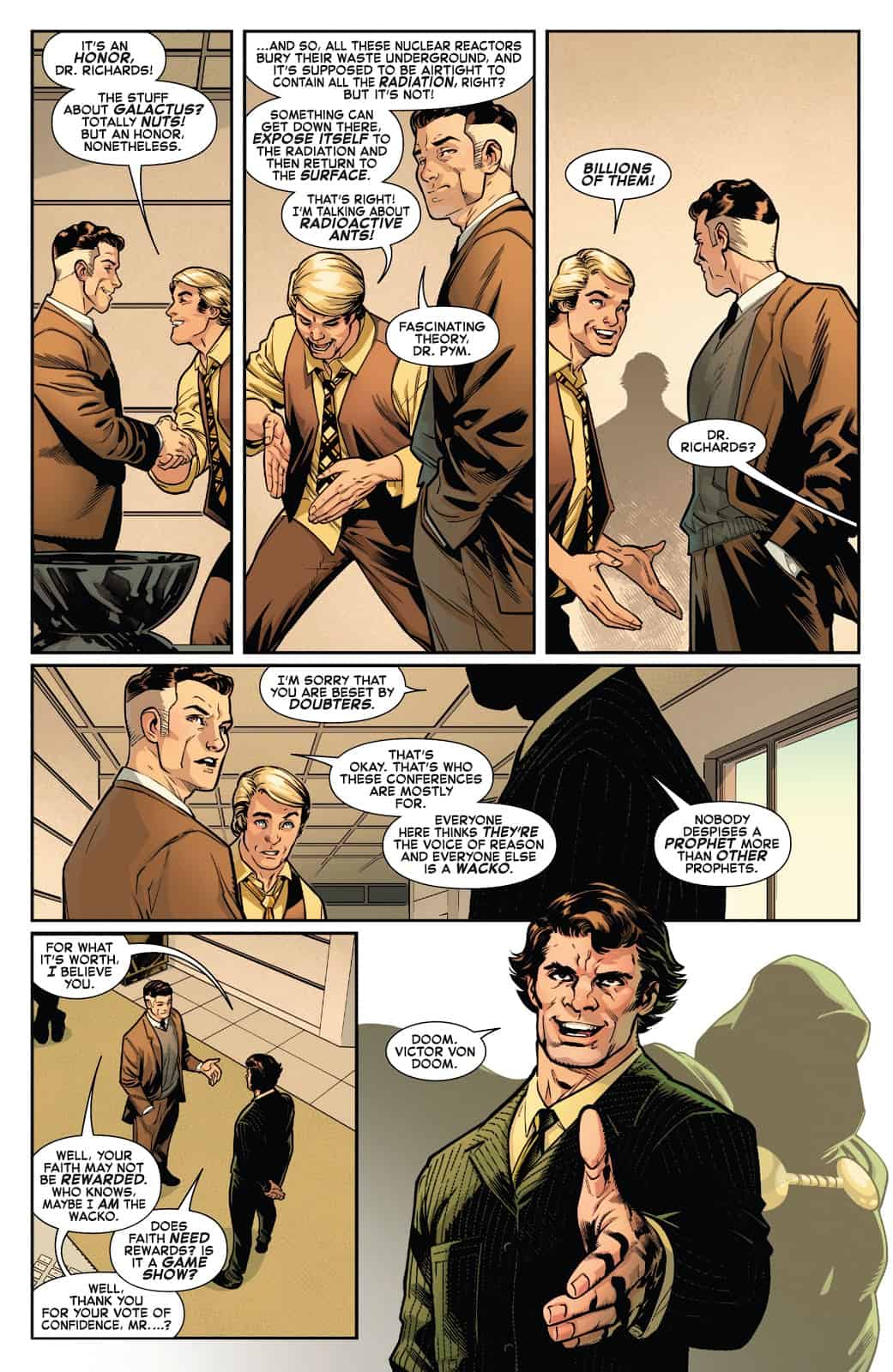 Life goes on.  Reed, the Torch, and the Thing defeat the Mad Thinker--without Sue, who’s at home with Franklin, making dinner.  Klaw tries to blackmail Ghana into leasing him its diamond mines until the Black Panther buys him off with a generous cache of Vibranium and tells him never to set foot on the African continent again.  Captain America fights the Vietnam War--helping Vietnamese people who are being abused by American troops.  The Sub-Mariner surfaces in Florida--and hangs out at a public library.  Sue tries to campaign for the ERA, but Reed complains that being alone with Franklin is taking valuable time from his work on the Galactus problem and insists she come home.  Reed’s obsession with Galactus and his friendship with Victor Von Doom both deepen.  Von Doom is becoming an influence as unhealthy as Reed’s persistent visions of worlds being annihilated by the planet-killer.  And it’s only going to get worse. 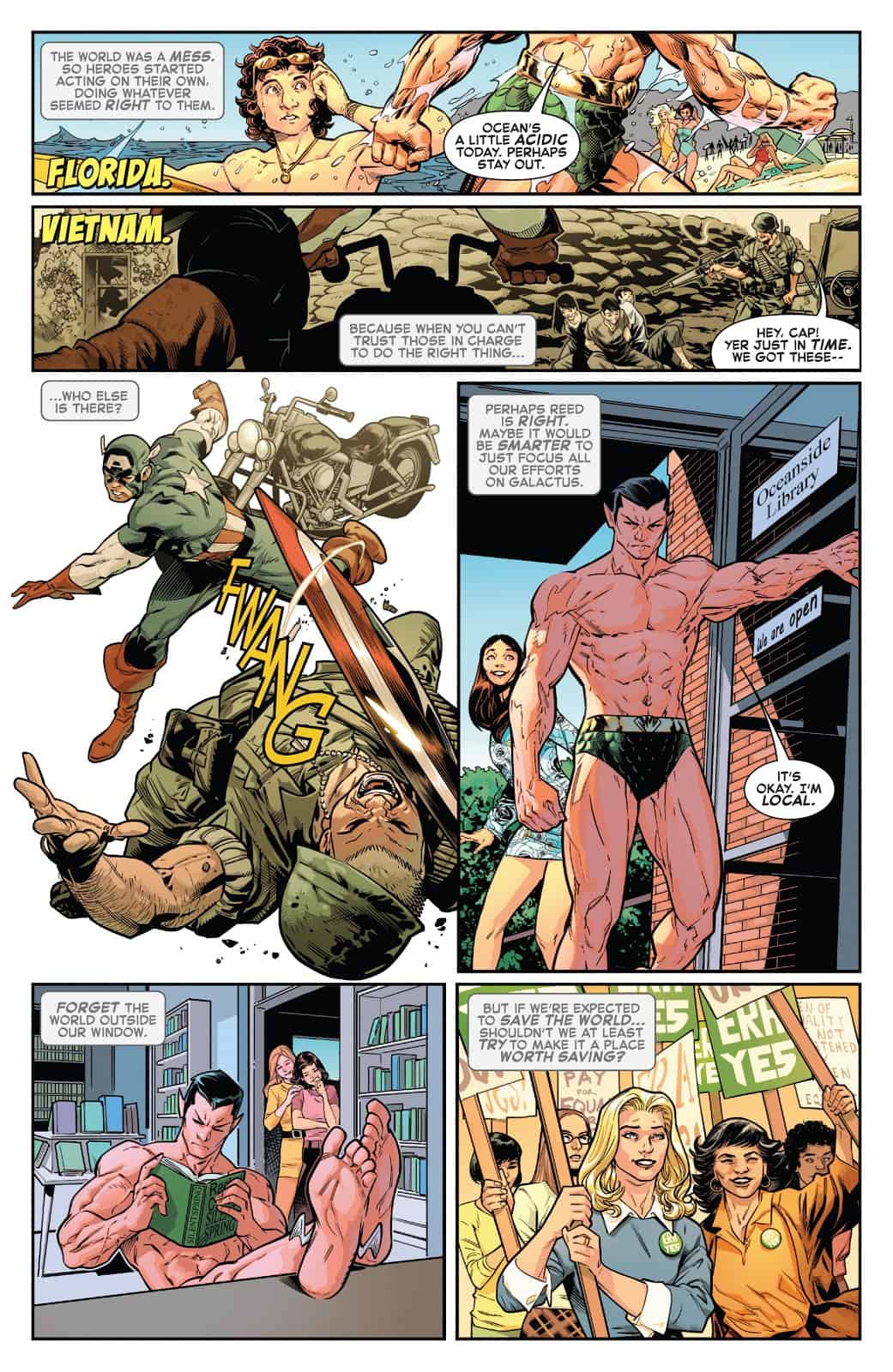 Which brings us to my favorite part of this issue:  Reed Richards meets one of my own personal heroes, though he doesn’t have anything to say that Reed wants to hear. 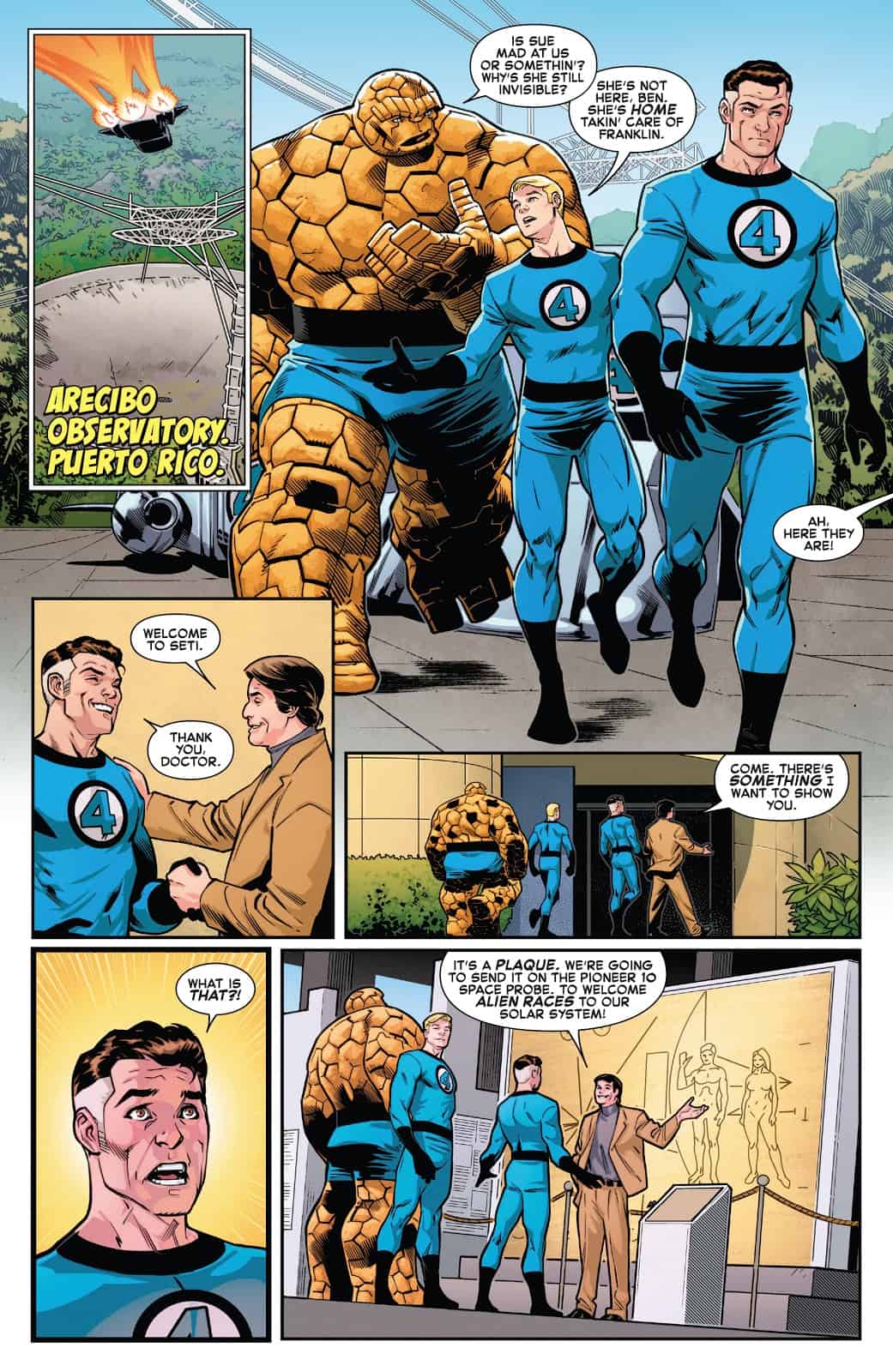 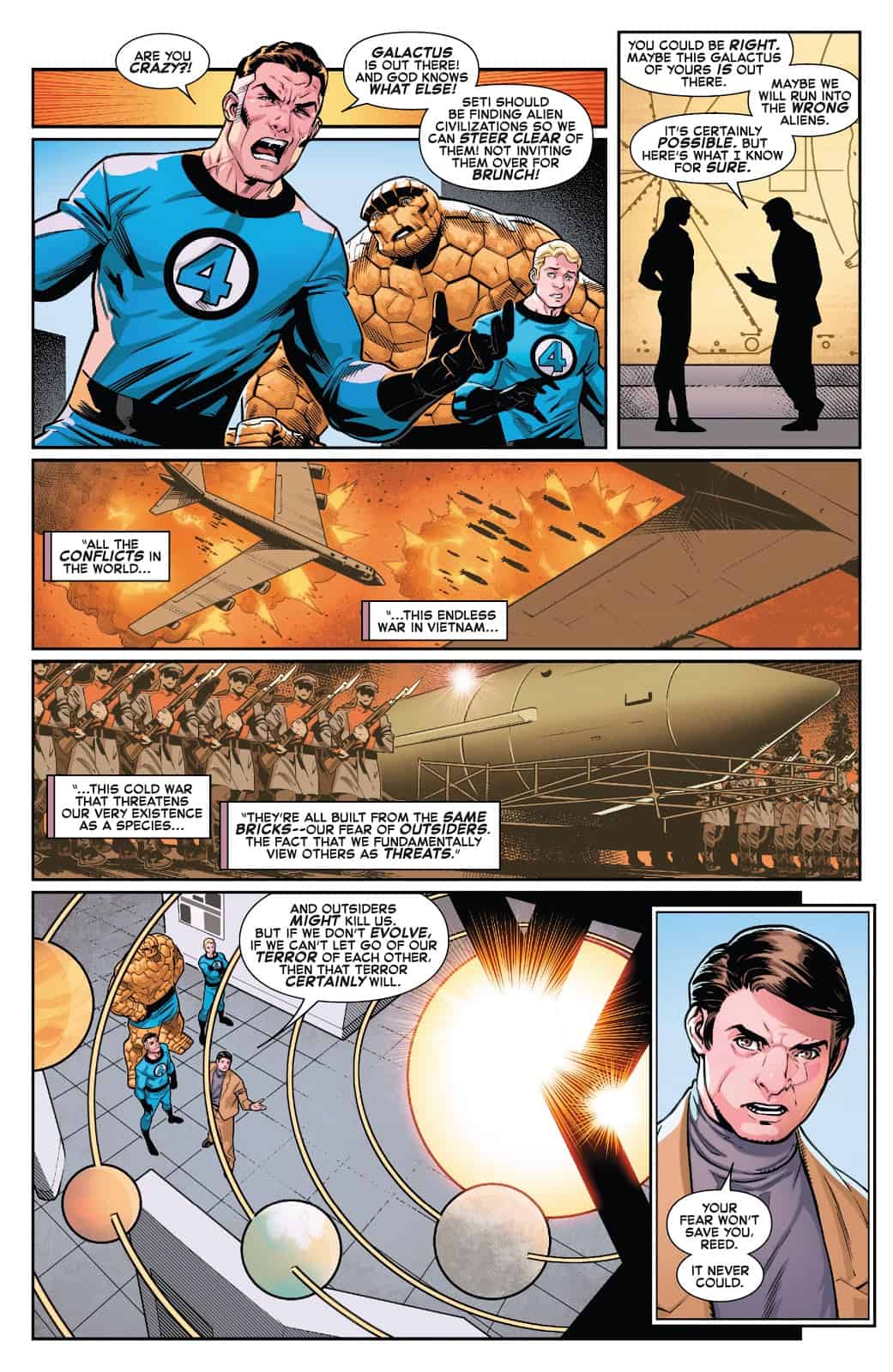 After Sue and Johnny have a brother/sister bonding moment, Johnny mentions the “thing” that the world’s heroes are attending the next day--to which Sue has not been invited.  After angrily confronting Reed about the “meeting of heroes” that he didn’t tell her about, Sue goes to Johnny’s place, where she meets Captain America, the Black Panther--and the Sub-Mariner.  Just as he did in our world, Prince Namor finds himself instantly attracted to Sue.  He personally encourages her to join them at the United Nations, where they will speak to the General Assembly about the state of the world and what super-people can do about it.  Sue tells Namor that she thinks of herself mostly as a Mom.  But later, at a book signing by Betty Friedan, the feminist author signs Sue’s copy of The Feminine Mystique with, “Don’t stay invisible forever”--which brings all of our heroine’s conflicted feelings to a head. 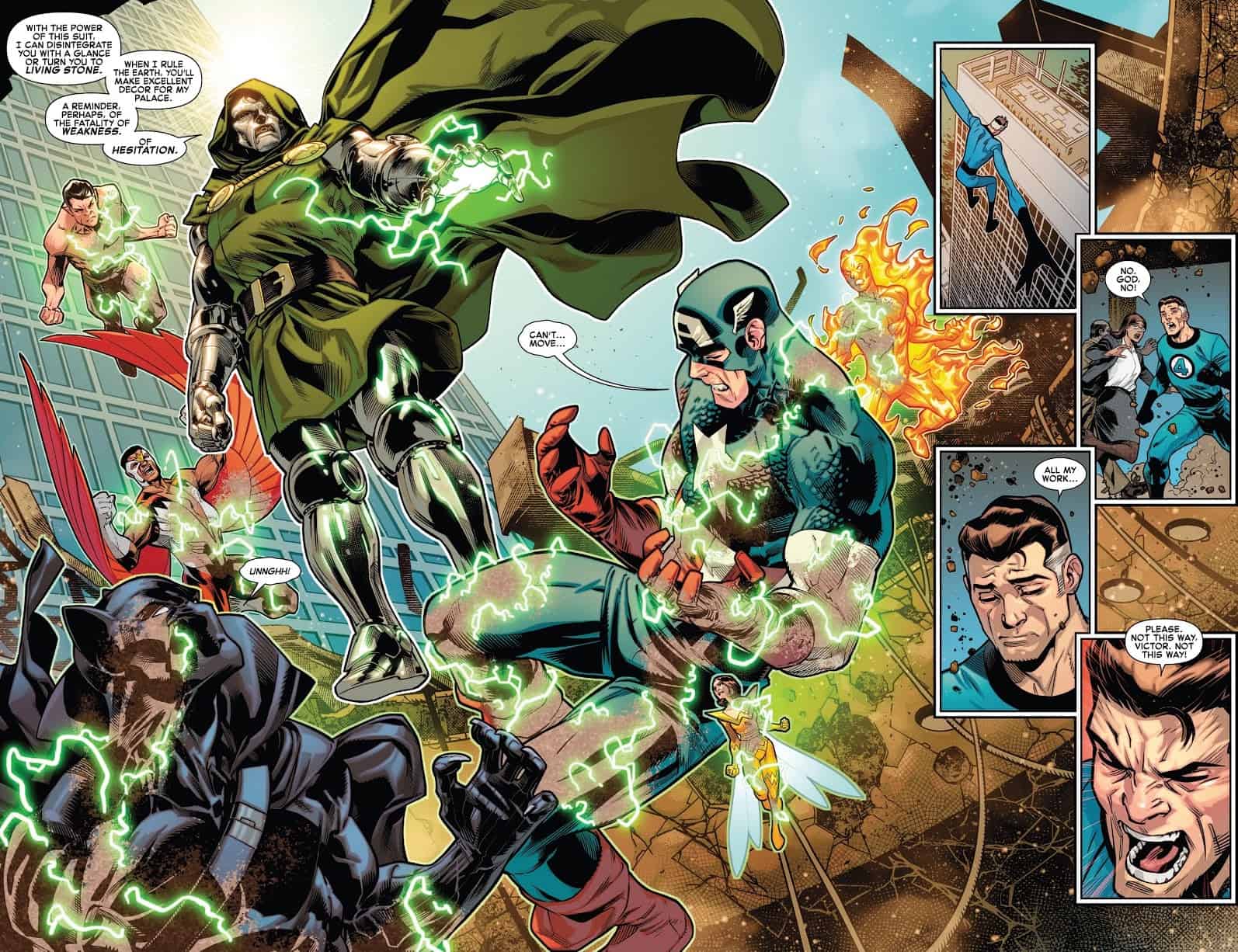 Sue is present at the UN along with Johnny, the Panther, and the other heroes.  At the same time, at Reed’s lab, Reed and Von Doom have finished their construction of a powered suit of armor that Von Doom declares they will use to attack the UN and the heroes gathered there.  Reed suddenly realizes that his “friend” from Latveria has been using him all this time, but it’s too late.  Now fully emerged as Dr. Doom, Victor blasts Reed and heads for the fateful meeting.  By the time Reed has caught up with him, Doom has blasted his way into the UN and immobilized all the heroes--except one.  The Invisible Girl has cloaked herself and grabbed Captain America’s shield, and now uses it to tackle Dr. Doom, bringing him down single-handedly, saving the UN and all the champions of humanity! 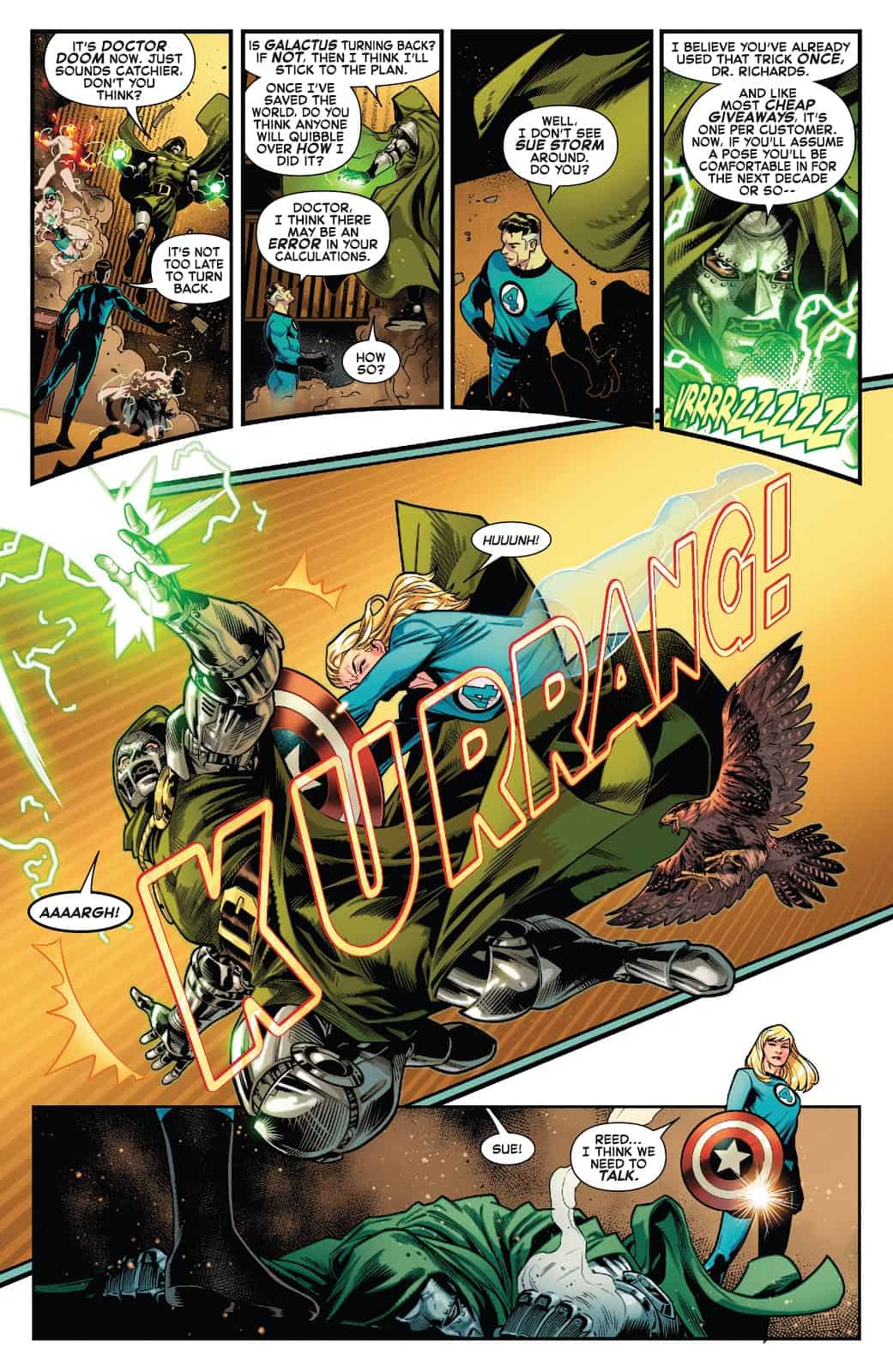 And the fallout of all this?  The great Reed Richards, Mr. Fantastic, is humbled before the world by his own wife.  Sue leaves him, takes a resentful Franklin--and moves in with the Sub-Mariner!  And Reed gets an urgent message from the Arecibo Observatory that “something big” is heading right for Earth!  (Cue the ominous music again.)

Ah, the 1970s–a decade of people trying to “find themselves.”  If there were ever an ironic position for the Invisible Girl to find herself in, that would be it.  Sue’s exact status in this story is not quite clear.  Is she using the call-sign Invisible Girl?  Is she calling herself the Invisible Woman (which she took up in real FF stories in 1984)?  We don’t know.  She’s not even calling herself Sue Richards.  In the “real” stories of the Fantastic Four, Sue took her husband’s name when she married him, but even that has gotten muddled these days with people constantly calling her Sue Storm. (I attribute this to the influence of the movies.) In the 1970s, women everywhere were intent on finding out “who they were,” a condition mirrored in Sue’s experience in this story.

In the real stories of the FF, Sue being concerned about her place in the team was a running theme, what with her not having her force field and projecting-invisibility powers until issue #22, then getting pregnant with Franklin, and later Reed’s overprotectiveness of “the mother of his child” and his condescending attitude towards her.  These latter conditions actually caused her to take Franklin and leave him (FF #130), just as she did in this story.  It has been a recurring story for Sue to be afraid of being pushed aside, of ending up as “invisible” as her powers make her, right up until the work of John Byrne in the 1980s.  Today, people who work with the FF like to keep her front and center, both because she is the most evolved member of the team and–let’s be honest–because she is the woman and most people who work in comics are straight men.  But it was a long journey for her to get to where she is today, a fact of which this story reminds us.

Still and all, as radically different from the real story of the Fantastic Four and the Marvel Universe this is, we find that some things are still constant.  Reed Richards is still driven by the need to use science on behalf of the rest of mankind and making the world a better place, even if in this story he let himself get suckered by Victor Von Doom.  And Doom, even without the backstory we know, is still Doom, insatiably hungry for power and blindly convinced that mankind will be better off under his rule. The Sub-Mariner still has a (Davy) Jones for Sue, no matter what she calls herself and no matter in what world we find him.  And Sue, no matter what she calls herself, still has the knack for snatching victory out of the jaws of certain defeat, the way she’s done numerous times in real FF stories–and more than once, against the real Dr. Doom!

Meanwhile, I’m also reminded that in the actual stories of the FF, Reed and Sue’s estrangement also resulted in her going to the Sub-Mariner–but it was all a ruse on the part of Namor and the Inhumans to manipulate the Richardses into reconciling!  (Fantastic Four #147-149.)  As we seem to have no Inhumans in this version of the saga (as witness the apparent absence of Crystal from the Torch’s life), we must assume things are going to play out very differently this time.

Regarding the artwork:  What would they have to pay Sean Izaakse to get him on board as regular artist for every issue of the regular Fantastic Four book for at least a couple of years?  He and Aaron Kuder are the best recent artists of “The World’s Greatest Comic Magazine!” and the presence of either one of them on a regular basis on the ongoing monthly title would be very, very welcome. Let them share the job, if they must (drawing entire issues), but I really wish they could be brought in as official FF artists.

On a personal note, I just have to point out once again that I loved the guest appearance of Dr. Carl Sagan in this issue.  Dr. Sagan’s star, both in science and the popularization of science, was on the rise throughout the 1970s and culminated in the publication of the book Cosmos and the production of the PBS miniseries in 1980.  I have always loved science and believed in the things science can do to enrich our minds, extend the reach of our knowledge, and make our world worth living in and worth saving.  Heck, I’ve basically always thought science is fun!  This is one of the things that attracted me to The Fantastic Four as a fan.  Reed Richards, if written correctly (he hasn’t always been), is all of those values expressed as a person.  Cosmos is a book that taught me my place–and everyone’s place–in the universe, and helped me to see more clearly than I’d ever seen before the importance of and need for science.  I’d always understood these things, but Dr. Sagan and his journey through the Cosmos clarified them so well.  It’s a book that has the strongest natural appeal to a Fantastic Four fan.  I only hope that if we see Reed and Dr. Sagan together again in some flashback or period story, it will be under more sympathetic circumstances.  In the meantime, if you’re listening, Dan Slott, a contemporary guest appearance by Dr. Sagan’s successor, Dr. Neil DeGrasse Tyson, and a meeting of him and Reed in the real Fantastic Four book would not be out of order! 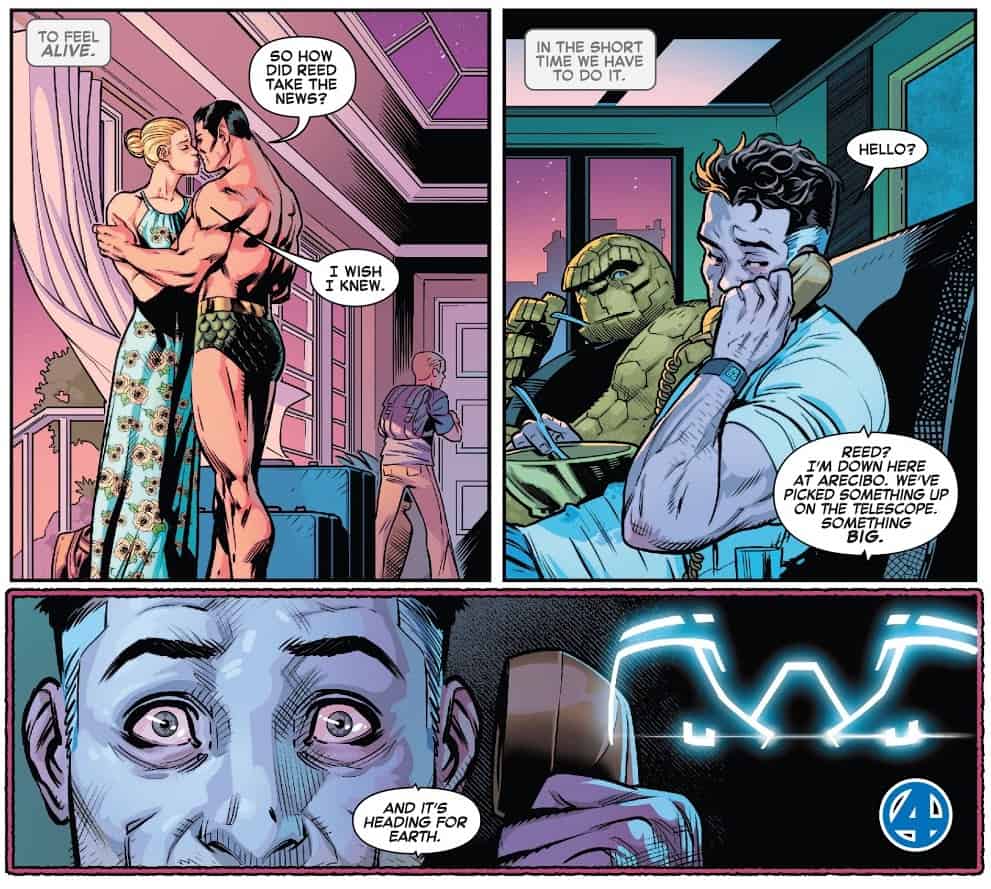 If Sue actually does consummate her extramarital attraction to the Sub-Mariner as this story implies, I don’t think I want to know about it.  What I do want to know is what happens when Galactus finally comes--and where in the heck the Silver Surfer is!  But we’ll have to wait for the answers to all this, as this peculiar rewrite of the history of Marvel’s founding heroes passes into the 1980s next issue.

Fantastic Four Life Story #2: She is Strong, She is Invisible, She is Susan